Easter time kinda seems perfect for bringing some dead back to the world, so I'm more than happy I've finally managed to get onother Undead chariot done.

So I got this placcy set recently:
back in the old days always wanted to see it on the table (all the automatic impact hits and shit) but for many reasons it's been unavailable for me.
It's nice feeling having another "alwayswantedtopaint" model crossed off the wishlist.

The chariot is used piece. It came unpainted but assembled, with skeleton crew already attached (armed with classic set of weapons: lance and bow).
Never liked this combo - undead are shit snipers, and imo carrying lance while riding chariot looks just fucking stupid. So quick surgery and both skellies were ready for arm swapping.

Basic idea was adding another crewman (wight or standard bearer) and skellies were supposed to be the (dead)bodyguards - so they got basic hand to hand weapons.
I couldn't find proper wight for the leader while assembling skellies but luckly there were 'nuff body parts to raise a zombie, which after painful orthopedics and necromancy treatment was turned into standard bearer.

I must say those placcy GW zombies were poor models, stupid parts, big Mickey Mouse hands. Couln't find any nice (acceptable...) looking head so I borrowed one from Mantic Games range - it's smaller than GW's but looks just way better.
After varnish and superglue dried I must admit I like this necro wheeler, wouldn't mind painting another one, but this time just bones - no rotting flesh aboard: 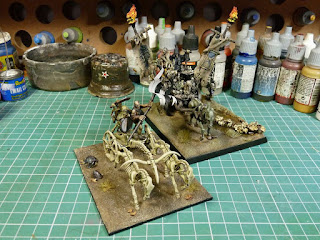 The model got 3x4" base - I can imagine it's not game wise but large base look just better on the table. Painting itself wasn't much complicated:
base tone, washing, drybrushing, glazing to get whole thing smoother, varnish.
More less. 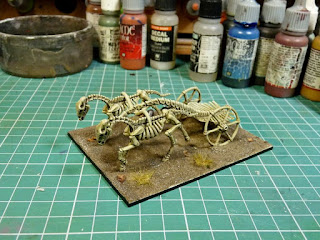 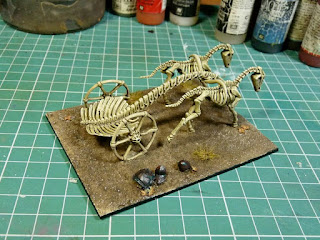 Standard bearer was assembled using what I've managed to salvage from the bits box.
It took a while to cut, pin and reposition arms and banner to get reliable bond, but it was worthy effort: the guy has fallen several times off my desk and nothing broken off (yet).
Instead of using banner from the armybook I decided to paint simple black and white stripes:
such thing looks really striking on the table so same pattern was used for skeleton crew and zombie horseman shields. 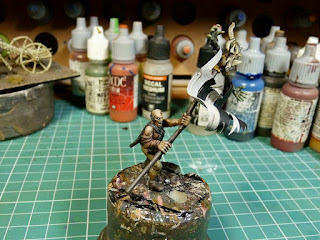 Since there are no metal parts (construction is very light) some superglue and greenstuff were enough to attach the deaders onto the board, but I think if there'll be next one I'll rather use long pins so crew members are nailed to the very base.
Hope you like the result: 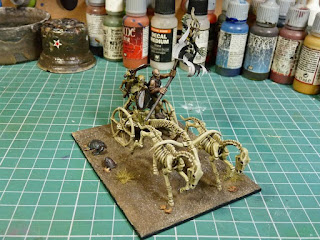 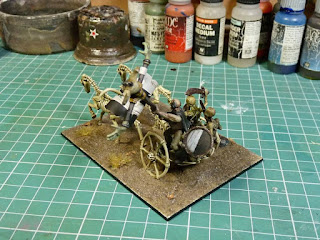 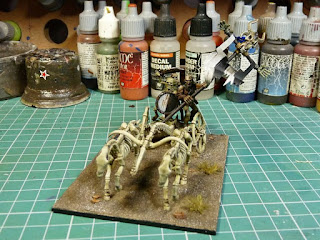 Anything else mini-related?
Yup!
I've finally decided to wash some junk which has been sinking in the paint stripper for quite a long time now. So long that I've actually forgotten what was inside...
It's great to know there are at least 5 more oldie zombies for my main Undead unit.
Not mentioning ork shaman riding wyvern which I've always wanted to see painted.
Decisions, decisions... 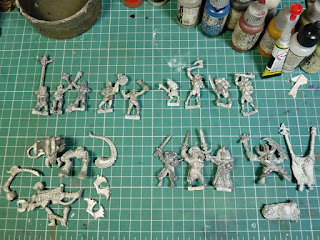