This time just quick update:
today I hopefully finished some job for the local courthouse so finally I got some free time to take pics of new display / photo background.
As mentioned before (several times actually...)  the previous one has been serving me for quite a long time now and I still like it a lot, but it turned out it's just not big enough for larger groups or minis or rather big models. Pretty crowdy, isn't it? 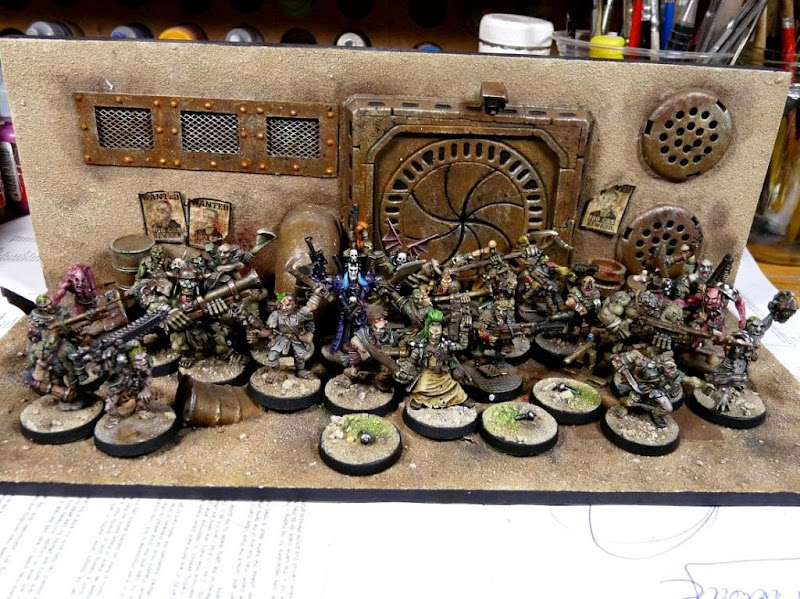 So the decision was made to get another one: wider and taller.
I wanted to make it similar to the first one and keep the theme of our post-apo / wasteland battlefield. Wasteland is cool: easy to build and all materials needed are some sand / gravel + spare bits. I used repainting Ramshackle Games parts (thanks again Curtis).
I must admit when I got those bits I underestimated them - it took me a while to spot the potential of the goodies. Since that day Ramshackle's offer has expanded a lot so now there's just tons of really cool models to choose.

Anyway here's overall view on the thing: it's 00" wide and 00" tall to fit my display case. As you can see there's anough space even for such fatties as Eradicator, biogigant, dreadnought or whatever. There's also small, everlasting tribute for Rik Mayall in the middle.

And the first attempt to use new station for photos.
I've expected much more - no idea is it the matter of camera settings, light, colors of wall behind or unusual (for me) model - pretty bright and clean. Probably mix of all...
I did my best to get result closest to reality but it's still too damn colorful - I assume it's because of the reddish in the wall back. Artifilcal lights were turned off and flesh is still damn bright - it must be white added to the final highlights. I guess.

Hope the next piece will be something bit more my style so pics should bebetter.
Take care!

This time only one model. And not even finished completly.
But that's what happens when suddenly normal life strikes in with full force of work to be done. Oh well...

But I am glad this necro-piggy is finally painted enough to be used in gaming.
It's my third attempt to paint this version of nepharite of Demnogonis (you can see the other one here) and it's finaly acceptable. There's still something to be done though:
after taking pics I know I have to add stronger contrast around the worms (some reddish brown or purple maybe), add some oxidation around rivets and add paint some weathering / stains on the robe. I don't mind the guy is wearing bright clothes (that's based on the fluff after all) but I've found taking pics of such model pretty tricky: bright rags reflect artifical light very much so I had to spend some time with GIMP making it look more-less fine.

I also have to finish new (much larger) photo-background. As you can see in the back it's very early stage. So far there are only some bits attached, there's sand on the ground and some base browns slapped. This time I decided to leave more open space so there's no problem with taking photos of whole squads or larger models (like Eradicator).

Hope you like it so far - it should look more juicy when I deal with real life shit.

And the last thing:
last Monday the postman delivered something I got from one of LAF members: some missing oldie models from classic Warzone range + some undead legionnaires (because there's never enough zombies). I didn't expect getting some new toys from the dark past might touch me so much - but it did. Examining old sculpts brought back ton of memories from highschool times:
times when there was no cellphones everywhere, no facebook, no fucking selfies, times when people where still reading books and when our biggest concern was what to do with huge amount of spare time but not whether I can find enough strength to paint a single model during week (painting nights only of course) or not.

I feel old. Wretched. And broken.

This time something quick and still wip-py: Cybertronic Eradicator Deathdroid.
I wanted to keep it for later posting (together with Warzone game report) but since there was no gaming last weekend...

I picked it from the lead pile to paint something else than another zombie and all in all I am happy to see is finally covered with paint. I don't play Cybertronic but this one will be part of several scenarios I have in mind (we all know the damn A.I. was never to be trusted...)

The model I got had no right arm so I needed prosthesis:
first I managed to recast original arm (with Magmascorcher) but since the flamer didn't turn out as nice as I was hoping for it has been cut off and replaced with placcy heavy machine gun from EE range. I must say I like it better than original weapon - deathdroid armed with Titan Megablaster can control most of the battlefield is placed properly.

General painting idea was of course based on the "official paintjob", besides such a baby-blue color will be pretty striking on desert themed field of battle. When I was applying highlights I was quite sure delicate blue won't be enough for painting edges and as you can see - I was totally right. So the first thing to do is to finish edges with almost pure white and enchance the shadows with either olive chalk dirt or reddish-brown rust, haven't decided yet.
I also think some greasy oil leaks wouldn't hurt - there's lots of pipes after all.