One fucking garden gnome down

It's been a while since the previous post so it's high time for some hobby summary.
Surprisingly there was pretty lot going on so without any more unnecessary bullcrap...

Few weeks ago I spotted Undead Legionaires blister on internet auction:
didn't think twice and 3 days later postman delivered 2 zombies to my place =D
I know these are really ugly sculpts yet since Warzone is no more I felt it's my solemn duty to save that part of hobby history.
For the same reason some I got 2 more abominations from Warzone range: nepharite of Algeroth and Ragathol (special character).
The nepharite was one of first models I saw in Mutant Chronicles zine and surely one of models which lured me into endless labyrinth of the hobby. I'l really like to give it paintjob similar to the Paul Bonner's artwork below but we'll see: there're still many models to be painted before I can start playing with this one. 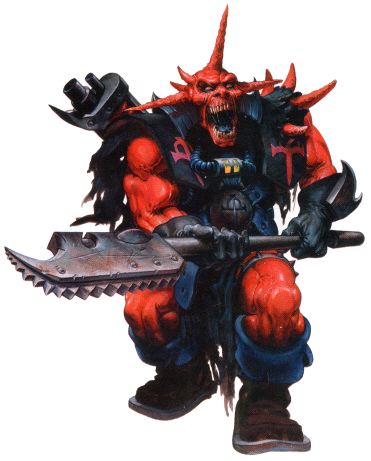 As for other new toys since the last post I've been testing the Dremel toy and I must say I can already see it was one of the best hobby purchases I've made in years.
Sure I've been dealing with pinning using hand drill (or whatever it's named) but new tool makes things so much faster! Especially when it comes to assembling large, metal models. As for the test I decided to pimp one of my plague zombies:
it's probably the 3th or 4th copy or the sculpt I have so the decision was made to modify it. My first thought was to make some kind or standard bearer for Necromunda (for missions with special winning conditions, scenarios or whatever) but after the job was done I found better destiny for that lil' bastard.
The pic was taken just to show the pins I managed to put into model - all using new power drill. Right arm was repositioned because I got model with broken limb - all in all I should be satisfied, because I could give it slightly more dynamic look.

And since we're next to Necromunda I also managed to prepare 2 more models to be added to plague gang: another plague zombie (what a surprise...) and second scaly.
Small conversions were made just to give the models bit of personal touch: zombie got new melee weapon (also pinned with Dremel tool) and scaly got shoulder pad - it should contrast nicely with greenish flesh.

Now the big news:
one of garden gnomes I got for painting seems to be finished: there are some minor jobs to be done after the client consulted with his co-workers but 25% or this fucking nightmare seems to be behind me.
If I can give you any advice about painting such a monstrocity here it is: DO NOT.
The size of that mammoth works absolutely demotivating, model takes lots of time to properly prepare, pin and assemble not mentioning lots of time, paint and varnish to finish the task.
The only thing I hope for is the next models will be painted fast due the experience I got while struggling with this cocker.
Anyway here it is - pic is really poor but the t-shirt was the only background available for such a caliber of model. I will try to write short review of it on CofC sooner or later.

Another big news is the fact I finally started some works on one my fav models ever: old zombie dragon (which is cool despite horrible rider model...).
Well to be frank proper works are made on the base but still I am really happy there's a chance that block of lead might be moved from the unpainted pile to much better place: display cabinet.
I also used some old models to keep the project in Oldhammer mood: wight, skeleton and zombie standard bearer. There are some paper banners planned yet I haven't decided yet which ones - old Warhammer Armybooks offer so many to choose from.
Hope you like current stage of works - the next update will contain dragon for sure. Big thanks to Skrit for providing wight model (Cheers matey! Good luck with miniatures business!)

I think some clarification is required: I am vegetarian so I didn't kill any poor crab just to put it's corpse in the display cabinet. The one used has been found dead on Spanish beach  (it was nothing but empty carapace to be honest) so adding swamp creature was no moral problem.

And the very last thing: small technical announcement:
since my appraisal site is being risen up I decided to finally finish the whole Plinth Country mess: tutorials have been already moved to proper blog section and the gallery to my Picasa album. It's already linked to the button in the right panel.
Not sure it's better than Photobucket but pica can be umploaded much faster and it seems to be more user friendly.
I also moved there some pics already stored at Chest of Colors gallery section and if I find old hard disc drive - some more will follow.

That's it for now - hope the nest time the second garden gnome will be painted =]
Posted by demi_morgana at 11:19 PM 13 comments: