The first thing is technical announcement - I decided to give a try to Facebook and some time ago the test FB site of the bloggy has been launched. I don't think there will be anything more published than links to new posts but we'll see if I can use it for something productive.

The site is just raw now - some background photos will be added just when I get any time (so don't expect it shortly). And because it's Facebook - there's brand new "zombie-like" linky on the right panel. Will probably replace it with more personalised pic sometimes.

And now something more hobby related.
I've been trying to learn taking decent pictures of my models since always. The more I tried the more I was sure it's equally hard to painitng models. My mentor in this matter is constantly Mahon - just check the pictures in the Chest of Colors gallery he took. Some of these were taken using dedicated vinyl backgrounds - there was review of that stuff somewhere on the CofC, report worthy checking.

I thought such backgrounds might actually be the improvement I've been looking for so I ordered some patterns. These is not any pro stuff dedicated for miniature painters bullshit, but samples of vinyl wallpapers. It looks quite interesting now but I will wait with the final opinion until I manage to place it behind miniatures in the light box and take a shot.

Which leads me to work in progress picture of zombie dragon project:
Few days back I managed to more-less finish the wight lord rider. The model is awful, no doubt about it, but it fits well the old dragon - and I really like the beast. It's one of the minis I've been trying to get painted for a looong time for several reasons, so be ready for a whiny, nostalgic (for me) story when I get it eventually done.

The plan was to paint the whole thing the "oldschool" way which means vivid colors a'la Warhammer 5th edition. Evil Sun banner is part of the story behind the project which will be revealed when the piece is done.

The pictures above were taken straight on the painting station, but I also gave a try to one of the new backgrounds. I am sure the results would be better if I took pictures in the light box but I am quite satisfied of the brick wall behind.
There are still 7 pieces of vinyl to be tested so expect to see them used on the next painted models.

And the last thing for this post: conversions.
The first one is nothing more but original model provided with new head: the master plan was to give it brand new set of spider legs or spider torso plus some minor modifications.
It didn't take long to realize my converting-fu isn't strong enough to do the job well, so I walked easy path.
More-less easy: it is truth what people say on forums about assembling this spider bitch. Getting it done is huge pain in the ass and probably wouldn't be possible without joints already casted with the limbs. Mortenebra is fully operational, armed and dangerous (and last night washed off the battlefield Dr. Arkadius and his band of war hogs).

Another model prepared for painting is epic version of Deneghra - my fav Cryx warcaster.
Even though I like the fluff and special  rules the model is just horrible. So the decision was made to customize it a bit so I can field her with no mental resistance.
Basically I needed to get rid of the lower half of the miniature. I've already seen some really effective conversions, where most of the model was replaced by Rackham's spectre (or whatever is was) mini, but I wouldn't feel comfortable mutilating any of Rackham's classic beauties so I've been looking for something else.
About 3 weeks ago by accident I spotted a ghost model from Reaper brand, which I thought might be good material for the job:

The description said it was plastic, but this seemed to be rather good news:
- plastic is easier to convert
- Reaper is (supposed to be) quality.

The model came. It was light but what else could one expect from plastic?
The problem was it wasn't plastic like EE or PP uses but some weird rubber-o-placcy crap! After I got it I read it's sth from new "Bones" series, and it was my very first contact with that substance. And the last one at the same time.
Model was very easy to cut but was so bendy it was pretty hard to make is the center of the model. Moreover because it's more rubber than plastic I've found it impossible to file (sic!), so all mold lines had to be removed with a knife...
Anyway I am very glad she is done now, nothing special but way better than original sculpt. The field test of her nasty spells arsenal is planned for the Sunday night, so I hope to harvest some pig souls for the glory of Lord Toruk!

Laters!
Posted by demi_morgana at 12:10 PM No comments:

After the November post about Cankerworm and Eando Kline something really weird happened: the number of blog visitors went just sky high!
Sure it's nothing to bitch about but I was looking for the reason of that thing: pics of painted models were nothing jaw-dropping, I don't post any pr0n neither so my guess is it was the title to blame.
Really? I mean could so many internet users be interested in watching something potentially disguisting? Or just maybe entomology has been very popular recently?

Looks like the only way to confirm or to refute that theory is practicing different catchy post titles sooner or later...

As for proper hobby matter: last Sunday night another model joined ranks of the painted and made the unpainted junk pile tiny bit lighter. This time it's Gutrott, young ripper from Enigma range. I got the miniature from my Chest of Colors buddy* and at this point it's the the only model from Enigma range in my collection.

The sculpt is sweet - it's Enigma after all, so not much to talk about it. There's lots of cool details making the paintjob pure pleasure + casting quality is very fine.
The model was painted just for fun, besides I finally wanted to use the plinth made for purposes of my first tutorial here bazillion years ago. I also tested new matt varnish - this time it's Revell. This stuff seems to be perfect replacement for Model Master, it seals models with thick, supermatt coat. Not sure sealing fresh blood (on the dead baby) was the best idea but I am still very satisfied**.

You can see some more views of the model under the link. I gotta find some new background for taking photos of the models - old and trusty black rag ain't 'nuff anymore.

Another necrotite fuelled toy staggering on the painting desk is Stalker bonejack being painted for my small Cryx battleforce. I really like this nasty sculpts and hope to finally find useful role for it during the battle.
The color scheme is quite unusual for Cryx stuff I've seen already but I've tested it on the Reaper Helljack below and I really like the "military" look of the model. Reminds me soviet post-apo killer bot: 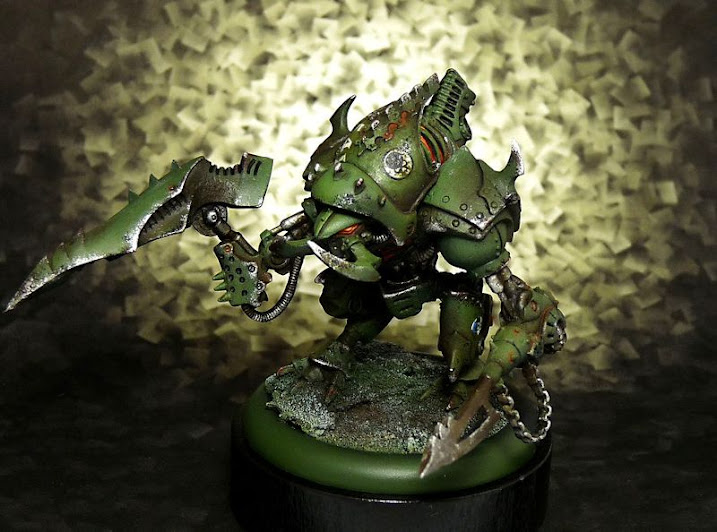 The leaping pose is also something I wanted to do for a long time:
it made already cool looking model even more dynamic and imho sinister - it's a character killer after all, with high defence stat, pathfinder skill and doubled contol zone. Fast and furious pain in the ass for enemy casters. Especially if fielded in pack =]

Painting was nothing complicated but it seem like simplicity is the key: 3 layers of airbrushed greens, some washes, metalics and details. And of course solid coat of varnish as the final touch - it's a gaming model after all. Voila!
Making the model more striking (for painting contest or whatever) should be no problem - all you need is steady hand and some fine detail brush to define sepatate parts of armour, enchance osl effect and add some strong shades + highlights. But again: I don't need all these fancy details to hunt down enemy solos and terrorize warcasters.

Hope you like the final effect. The next model in the queue Cryx warcaster Mortenebra.

And the very fresh news from the front of Battle for Hope!
The event took place despite screwed up weather conditions and all donated models found new homes. Below you can see a pre-battle photo, for more you have to visit BfH Facebook site.