After painting Chronopia beast I somehow cannot kick myself back into hobby routine. Apparently I am tired or overstretched my painting abilities at the beginning of the year...
No matter what was the cause miniatures won't paint themselves and hobby altar demands contant sacrifices.

For a while I wanted to paint Mercurian Maculator from oldie Warzone range (bah, of course OLDIE range!) - it's that ugly thing in the back of first pic.
During back days, when original Warzone was actually alive (and quite prosperous I think) I've never had any opportunity to see the model on the battlefield. It had brilliant artwork - by Paul Bonner himself, nice profile, useful skills and decent gun. But at the same time it was so fuc*ing big it's chance for survilal were just minimal. Nothing but a stupid bullet magnet.

So after Mr Maculator got pinned, assembled, based and undercoated the decision was made to switch to something smaller and, let's be frank about it - looking nice ^^

I've always liked Mordheim - sadly we've never played it. No reason why actually.
No matter how cool the game really was it also had (and still has) huge hobby potential:
tons of miniatures to choose to create really unique gangs, lots of cool ideas about painting and modelling to fit the depraved and wretched City of the Damned.

After some excavation works in the Pile ov Shame some models emerged to start with. I have no idea about battle usefulness of minis chosen, simply picked oned I liked:
there will be like 3 gors, 3 ungors, some boss, minotaur and fiend of Slaanesh (probably proxying chaos hound). First idea was to use orginal beastmen lord / champion from the mid 90's, but I've found oldie chaos warrior model which can be even better candidate:
- it's dedicated worshipper of Slaanesh;
- it has beastman (probably) head;
- it's suited with heavy armour: painting it really dark would be just really cool especially if model is placed in the middle of bright models;
- worst part of the sculpt is that stupid looking blade, sadly it's connected with armour and head so I cannot replace it with anything looking decent.

So here's the current stage of the group. They will get classic "Road to Mordheim" base - simple and effective: 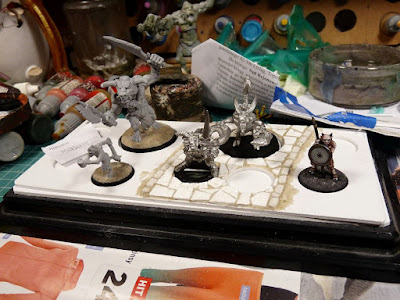 And below you can see the first model from the band (color test).
Since it's Slaanesh group the warriors must look rather "fresh" and alive - and this little fucker is rather ok. At first I wanted to achieve albino effect but then I thought maybe it's better idea to keep such complexion the the boss - no matter what model it will be in the end. 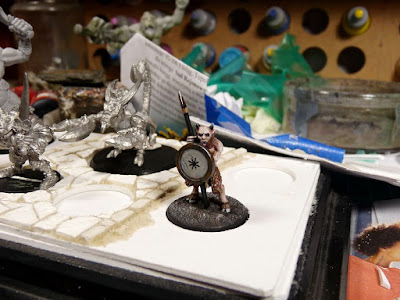 And last but definitely not least since it's about divine matters:
last week I've finally got the sleeve inked. Whole project started few years back but because tattoo studio I chose is 60 km away from where I live, I've always had something better to do than playing with ink and needles. But it was high time to please Great Cthulhu, armageddon might come any day after all (let's hope for it).

It's still fresh and it will take at least few days to heal but I will take some shots when it's done. I kinda know posting tattoo pic is rather silly but hey, it's still better that posting pics of food on Instagram! Or wherever!
Besides that tattoo artist did piece of great job, no doubts about it.

So, Cthulhu, you may now raise from the eternal slumber, I am ready! Iä! Iä! Cthulhu fhtagn! 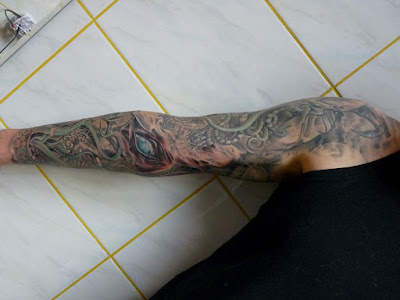