Sisters or battle, US engineers and others...

Stuff below has been prepared a little while back but since there was Bolt Action "tourney" recently, anything else would be simply dominated and crushed under pictures I've taken during the games.
Which reminds me: here's what I brought: 1110 well fed and equipped points. Don't think anyone's interested in the list's details so family picture should be enough: 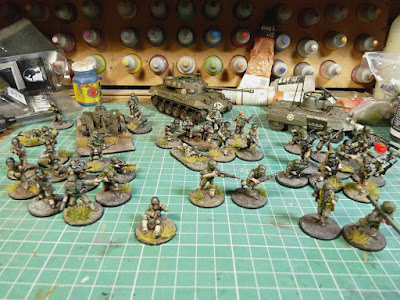 So for starters:
I am proud to announce that the job to collect Warhammer 40.000 2nd edition army books is finally done!
Last August friend of mine delivered Sisters of Battle book so now they are all standing proudly in my micro library.
I must admit I've never played 2nd edition. In fact - after having few games (later edition) realised 40k ain't my thing at all: I definitely prefer skirmish games than large scale battles (paining dozen or so models size gang should prevent me from becoming bored too fast).

I gathered these books mostly for graphics and fluff.
Well... Graphics actually...
It's just great source of Mark Gibbons' stuff, who's works was of main reasons I drowned into the hobby back days. And never regreted.
Right now I am considering putting the books into hard cover but at this point have no idea which tomes should be binded together: good vs bad?
But who's good in 40.000 universe? 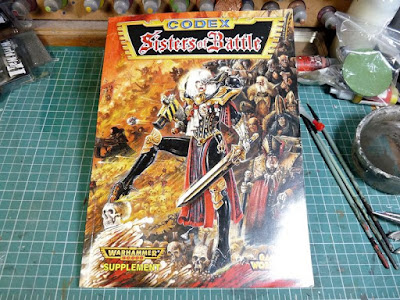 Let's get back on Earth.

I've mentioned Bolt Action "Road to Berlin" game, right?
The game format was rather unusual: 1111 pts. I prepared force rather different from what I usually field, but all in all it was quite reliable team. Especially given the fact all games were brand new scenarios.
For the event I painted fresh squad of engineers (sadly they never got close 'nuff to use flamethrower...): they got slighty different, brighter uniforms to make them pop among rest of cannon fodder. Me likey. Especially these are mix of models from Warlord, Artizan, Black Tree and West Wind. Such cocktail makes any unit even more characterful.

I think infantry coming next will also get these bright jackets but maybe different helmets, to discern squads (hemp? bright olive? white - like military police?). 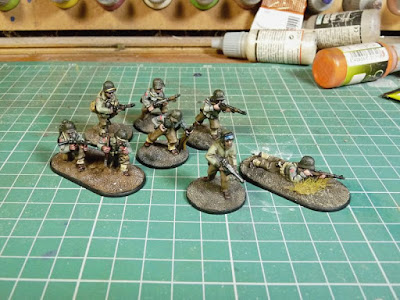 And she last Bolt Action thing for now: mortar.
Most of armies (if not all!) I've seen during the game were equipped with mortar - I must say I've underestimated this weapon until single shell blew my whole squad, leaving big hole full of smoking shoes...
Than was scary.

After coming back I rebased my medium mortar - to keep whole unit on single base. It looks way better now, than keeping mortar and the crew on separate bases, like I had it before. What do you think about 35 points such well spent? 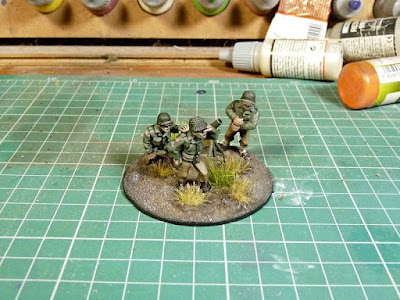 Till the next one!