End of another Ash wastes campaign

This post is also slightly delayed:
not sure is it because I had some more work recently or because that b!tch spring coming but I barely could made myself to sit down and paint anything.
Yeah, yeah - hobby should be fun and all but last weeks I am just fallen to pieces and need to be put together. Pronto!

Broken or not - there was something going on.

First of all we finished the Necromunda campaign about started last November.
It was only 9 games (there are only 2 players, remember?) but I was lots of fun and excitement - especially during rescue mission and the last match when we rolled hive quake on treachous conditions chart. After the last game difference between our gangs was ~400 pts so further games wouldn't be much fun.

And below you can see the badass team. During the campaign I had lots of luck during post battle sequence - just check how many sprinters are there!
No sh!t, my rescue team was running circles around the pit slaves sentries when I had to save Deadeye, the only sharpshooter in the squad. During whole campaign I've lost only 2 or 3 gang members so below are only the best of the best.

My killers are standing like they're placed the sheet: starting with da boss on the left and ending with useless melee beast - Barracuda. 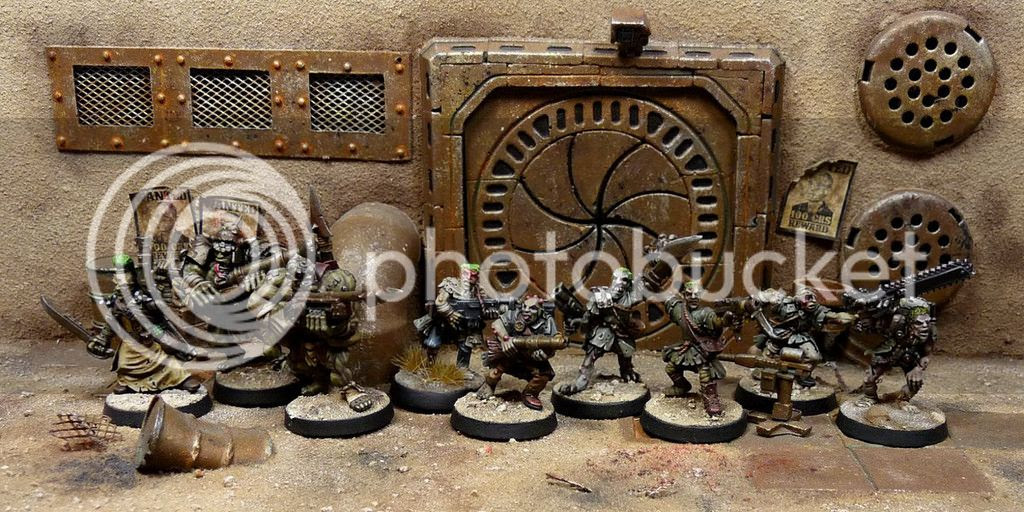 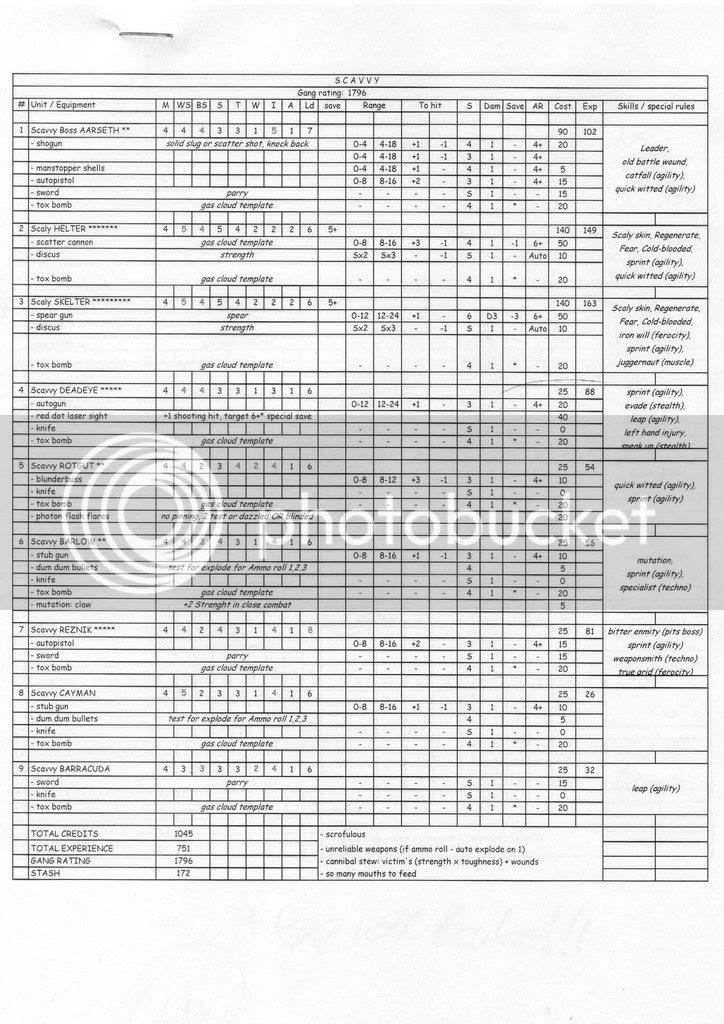 Deadeye - probably my favorite ganger, got new colors after coming back home from captivity safe and sound. It was painted when I was yet a student so it was high time for fresh colors. Besides now with some camo added it will be even more deadly than now!
There are some more scavvies painted long time ago so hopefuly these will be also rewarded with brand new colors shortly. 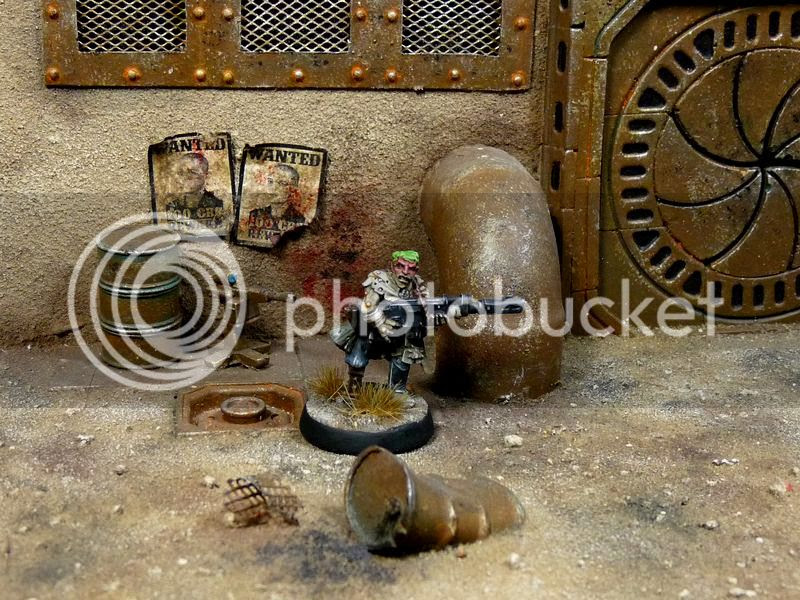 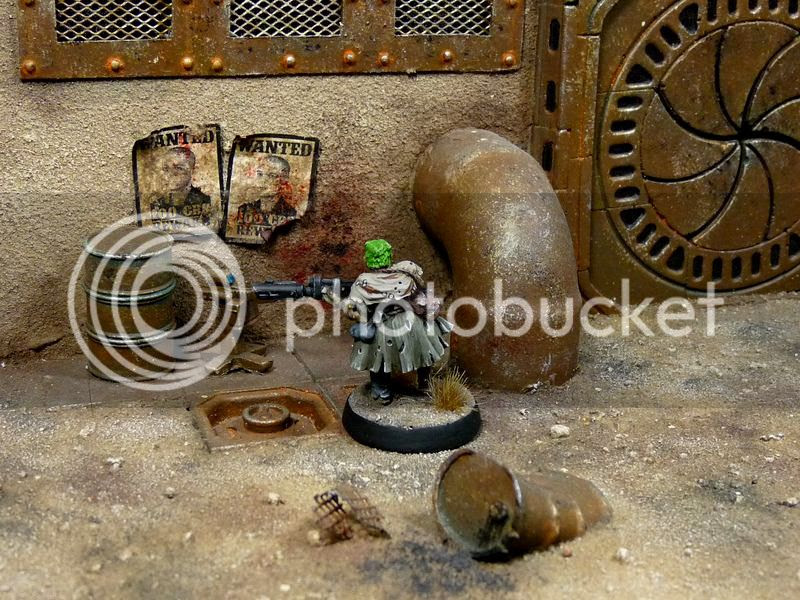 Another small victory is the lasy of Heresy blights finished. These models are definitely worthy recommendation - thank to all those little nasty details painting is just very pleasant process and with a little bit of effort you can turn these demons into something really eyecatching and unique.
The only "problem" was choosing colors - since these are creatures out of our world practically every colors would be ok. I wanted to paint this one black first (sth like black zombies in Diablo PC game) but all in all I used something more common.
Common among zombies that is ^^

With this rotting fella done looks like there are only 2 plague marines left + maybe beast or nurgle / chaos spawn to have whole chaos cult finished. That's a nice surprise - I didn't plan to suddenly have another gang ready for action but it would be nice start for narrative gaming. 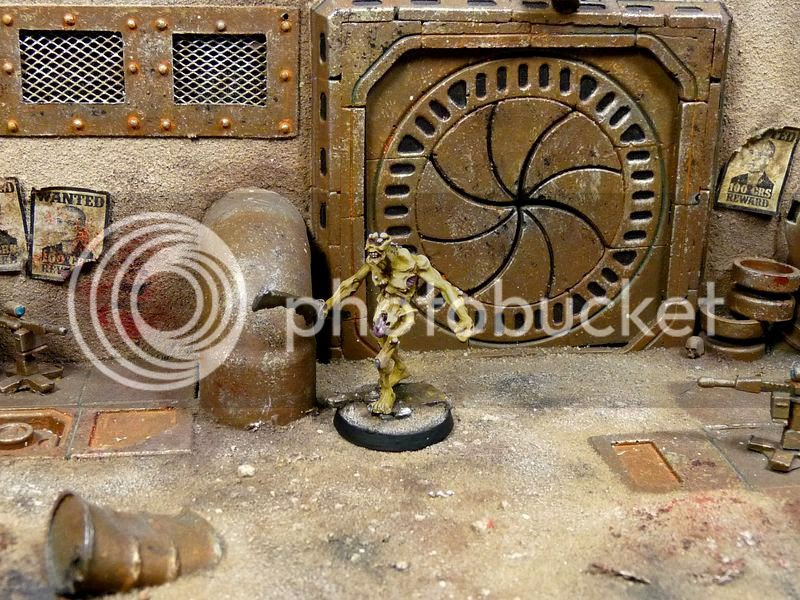 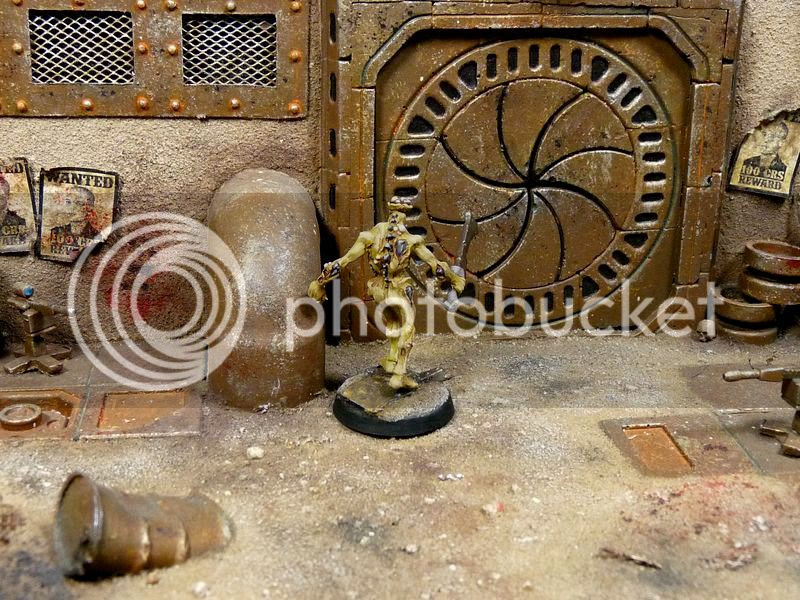 And the last thing for this post - kinda blast from the past.
Last week I brought very old project back to daylight from the miniatures purgatory. Few years back I got some ork vehiclezzz parts and with no better idea I attached them onto the cardboard construction and voila: wheeled dreadnought.
There's no specific idea for colors but since it's already desert yellow I think I'll hit it with several layers of yellow glaze and make it Bad Moons stuff.
Just hope I won't get bored or discouraged just after painting tyres ^^ 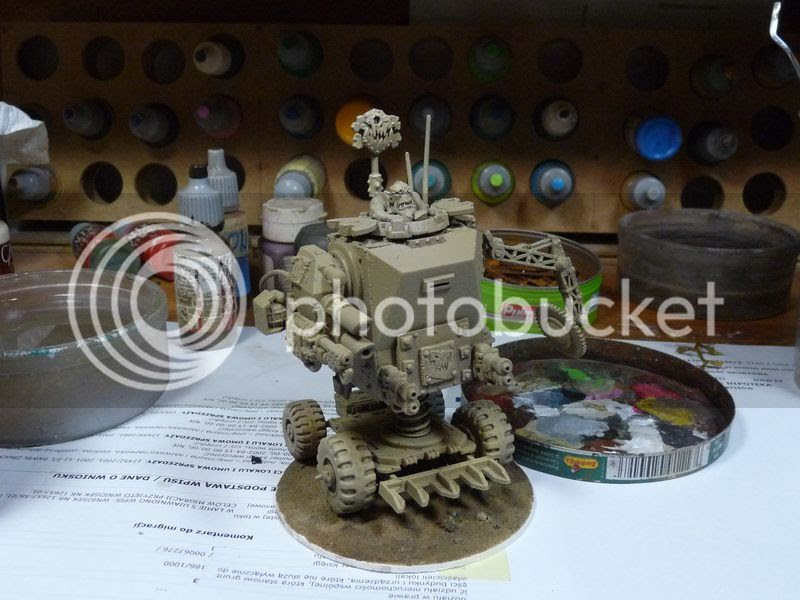 This post is slightly delayed - on purpose.
It was prepared about week ago but since I didn't want to ruin the surprise (about which bit later) the publish button had to wait. Tough life mr button!

As mentioned in title the post is about 3 main somethings: ugly, green and for sale.
The first one is something ugly. Not the ugliest thing I've ever painted but surely solid candidate for the pig party: Ragathol, nepharite of Algeroth.

I remember I got the model few years back with some other old junk. I remember this cocker had pretty useful rules and stats but when it appeared we were already out of Warzone gaming. Which couldn't stop me from painting this beautie.
Apart from the fact I keep lots of feeling for old models this one is also kinda warming-up before painting something really ugly. The model X is also from Warzone range and since even I call it ugly you can try to imagine the scale of the depravation...
Anyone taking a guess?

The colors used were taken from the original artworks so there's not much of my invention on this field. Paint was sealed with lots of matt varnish so I hope to see it on the gaming table sometimes. In narrative game / campaign maybe...

Something green!
Or better - greenish.
This blob is one of my favorite models ever. Or to be specific - 5th ed Warhammer greenskins army is the thing which dragged me into the hobby and I think Kev Adams' gobbos is the very best of it: funny, nasty faces, evil grins. Painting is pure pleasure!

The specific one is one of few greenskin doubles I had. It was painted for Mr Bugman so the poor guy has one model less to paint for the army (hope you're already started painting, Nav). Color combo is something different than classic night gobbo but I wanted to give a try to some warm and vivid colors so I can use them for my greenskins display gang.
Hope it came safe and sound and you like it!

And something I don't need anymore.
This time there are 3 models I'd like to get rid of - preferably sale but I could also exchange  them for something. Not sure what really ^^

You've seen it already - zombie bust. 10$ + shipping and Paypal fee and you can get yourself rotting paperweight!

Another one was a train man (?) from Pulp City.
Sold while I was writing the post bus since I've already uploaded the piture...

And chaos troll / mutant / whatever.
It was scaly in my Scavvies gang but Now I play "pure" gang only so this one had to do some space for the shorter cousins. 25$ + shipping anyone?

And the last thing- which also happened while I was assembling the post.
The mailman delivered some stuff!
About a month ago I spotted some oldie White Dwarfs and rulebooks on Evilbay. Nodays you can actually get such materials pretty cheap if you are into such an archeology. Anyway I've never been big fan of White Dwarfs - most of ones I've seen are from placcy era, where all you can read about is super-duper army deals and "promotions".
But it turned out there are some articles about Necromunda and 'munda battle reports plus some other stuff from 90s' which in my opinion was the golden era ot GW. I won the auction for barely nothing, whole shipping cost was much more severe than the content.
Here's what I got, lots of painting reference materials, fluff to read and ideas to use.
Me happy. Yet still cannot believe GW stopped supporting specialist games.

Phew!
Pretty lot of pictures as for my single post, hope to deliver some more shortly!