We're having bugburger for a dinner!

This time it's only small wip-photo.

Last night the bases (both display plinth and round 25mm gaming base) for the commissioned pathfinder were finished. I will glaze them with some natural colors and chalks when the miniature is ready, but it's just the very final touch.
Such easy trick makes model fit it's base much better.

Anyway the base is not only part of the current commission paintjob, but is also test piece for Battle for Hope project. As I've already mentioned I decided to give away Cankerworm for the event and "natural" base is one of options. You can see plinth for the Worm in the back by the way.
Another option is something (much) more rusty and corroded, which suits better both my preferences and the bonejack itself, but it's something yet to be considered. 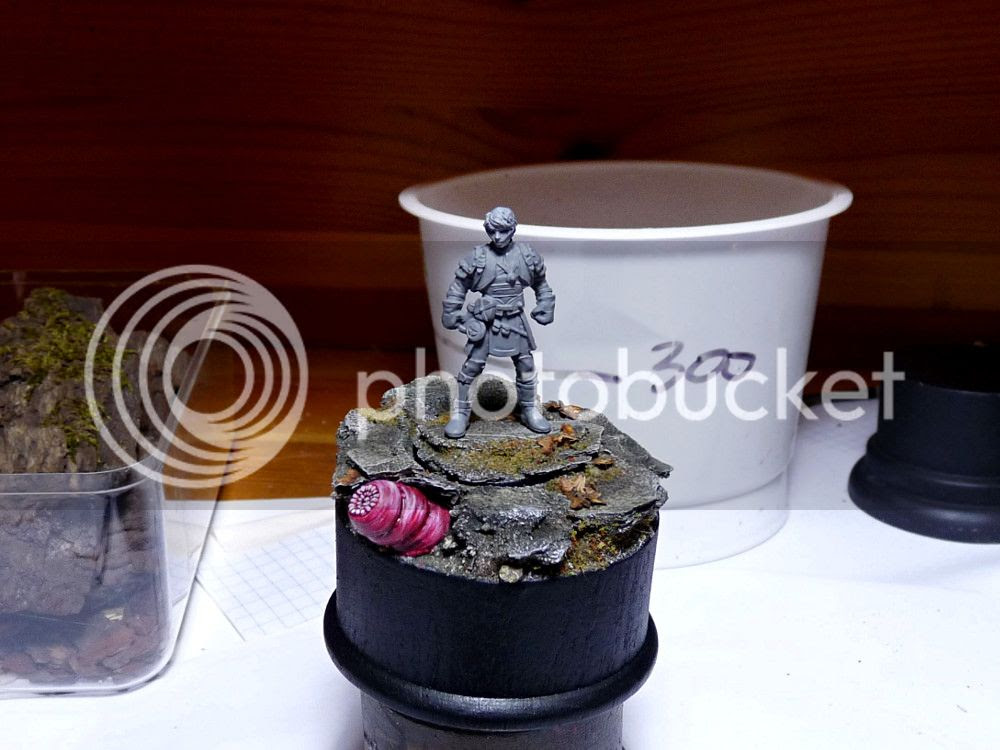 Posted by demi_morgana at 12:08 AM No comments:

But first: the ship has arrived!
Actually - the Galleon! And soon it will sail through dangerous Big Pond, full of sea monsters straight to it's US (master and) commander!
Aaaaaarrrrrrrrrrrrrrrrrgh!!!

I am very glad to have it already painted.
Not that working on the model was sort of nightmare or something (it was really nice change to do something hobby related finally), but accidentally while the commission work started - I was also moving to the new spot.
But after whole the mess the model is ready and all I have to do is provide box durable enough to protect this baby against dirty and malicious minds of post office workers.

The very original color scheme was my client's idea:
model is part of battle force based on Tramar theme (whatever it means - sadly I know very little about Iron Kingdoms fluff) which is also reason of "banners" hanging on the colossal's torso.

The guy also asked for 2 removable bases: ship deck and battlefield themed. Some strong magnets and thick pin solved problem of standing the Galleon. Hope you like what you see - pics are average but I cannot remember I've ever taken decent photo of such a large toy. 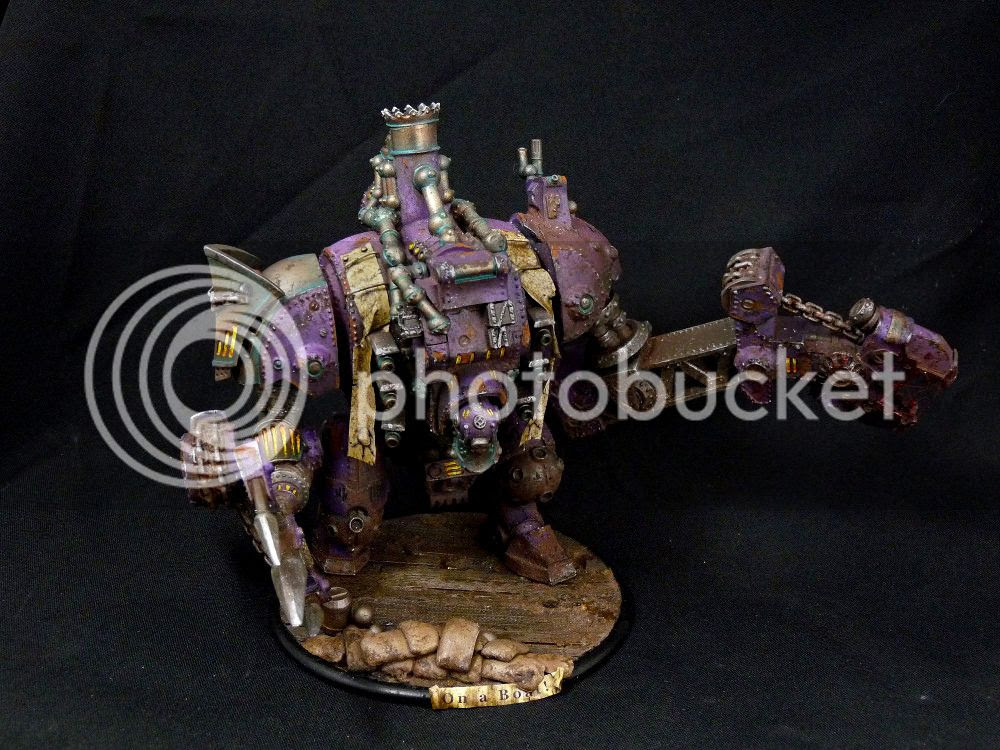 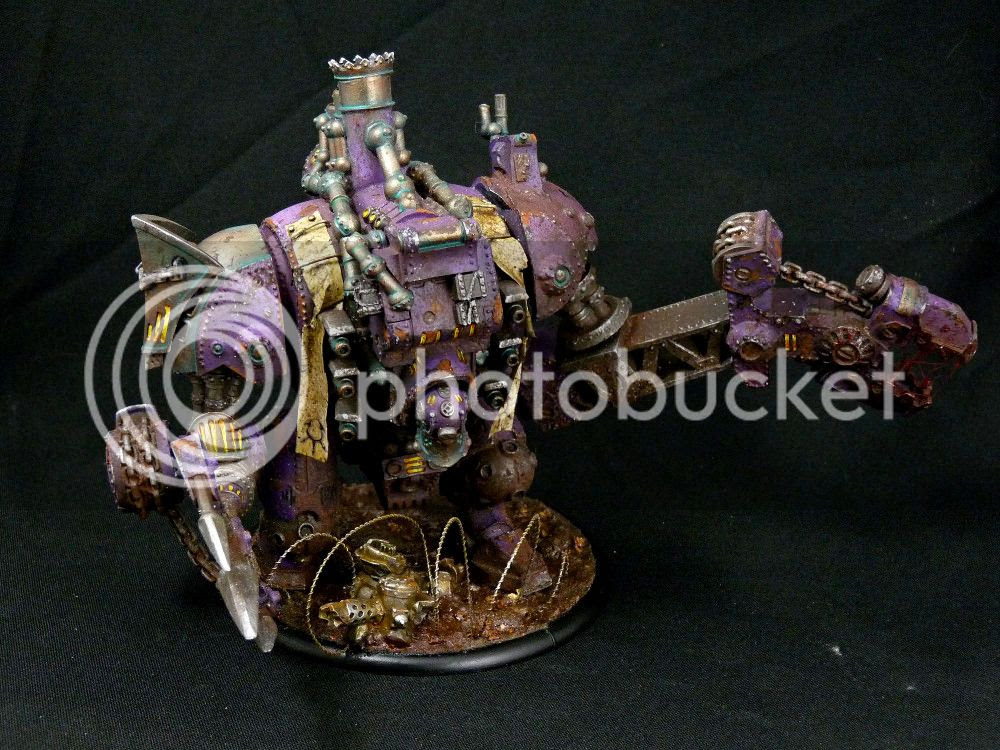 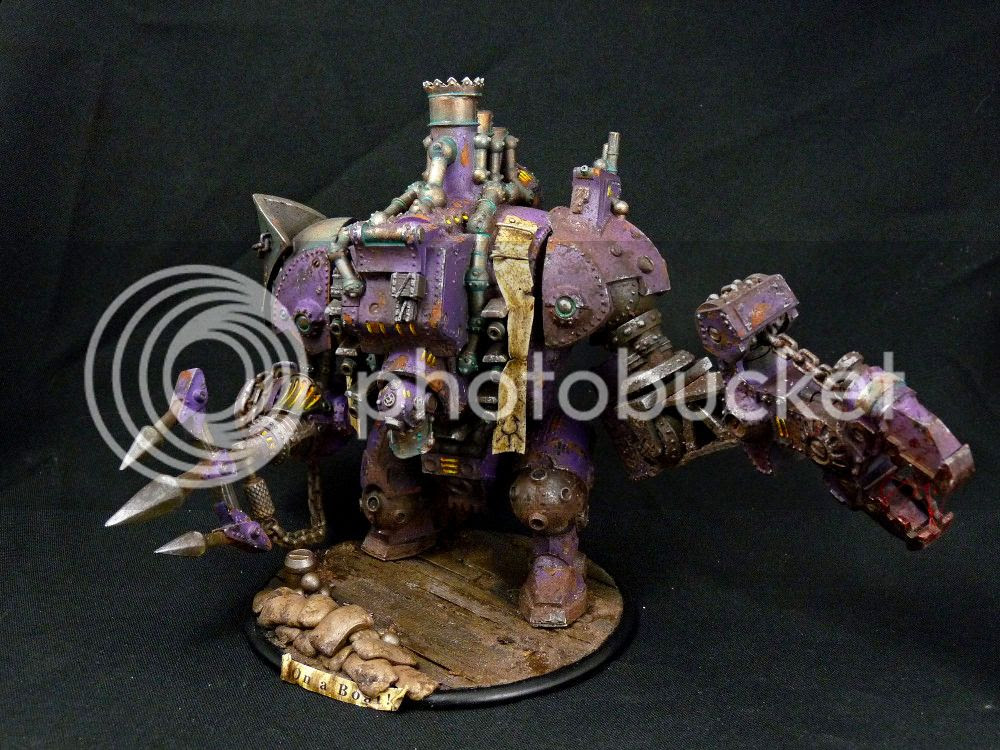 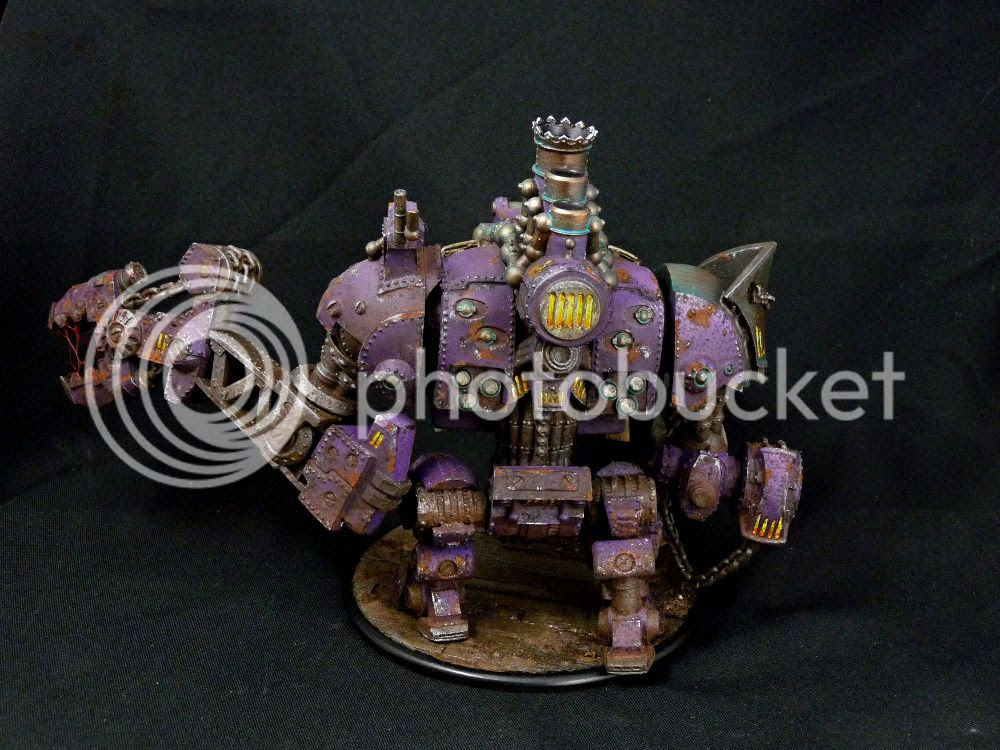 The big guy is not blocking my painting desk anymore so I can finally start another painting commission. Some time ago I got a proposal of painting really nice model from Reaper's range: Eando Kline, the Pathfinder.
The model below was painted by Derek (you can see the proper topic on Reaper's forum here) and I was asked to base my paintjob on the Derek's work.
I will be surely very challenging task but hope see the mini painted with no further delays.There're still some of my Scavvies waiting to be painted after all!

At this stage model has been filed and undercoated. I've also decided to give the mini display plinth with socket to insert the round base. It's not much work more but I want to compensate the whole delay thing

But hobby life is not limited only to painting commissions and wargaming. There are other things as well.
Things like experiments.
About 3 weeks ago I went to fusing classes. I saw examples of such stuff during some recent appraisal work and there's just lots of possibilities to try. For starters I made 2 kinda-plates (whatever it is - doesn't work as eating plate for sure ^^) but the plan was also to give a try to some jewelry and some more useful things: like containers for dices, gaming tokens and the rest of these little gaming stuff.
Sadly after the first classes it turned out I won't have any chance to find enough time to go there regularly so all I got is the thing below. I left the other one in the class room - they sell fused glass products so who knows, maybe someone found a role to be filled by my "plate". 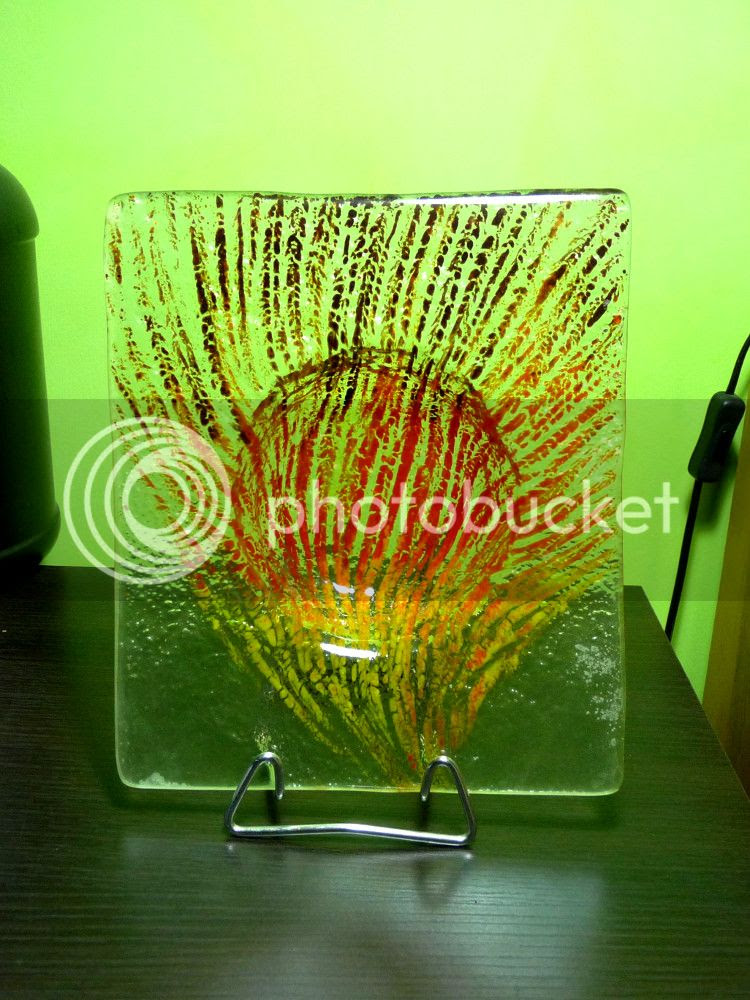 And last but definitely not least: the promised huge rack. Probably the very first rack posted on the bloggy!
It took me long time to get the rack into the the gaming room but it's there already and it's not leaving the place.No freakin' way!
Ladies and gentlemen... Well... Let's make it just: Gentlemen: I am presenting...

After taking some of the shit stored in the gaming spot (stored there about 1,5 year ago) to the new home I discovered some unused wood. These planks were part of garden house roof or something.
8 of these were nailed together, cut to proper size so now we can we can play wargames on 72" x 72" size battlefield - 3 x 3 modules.
Maybe now I can finish these damn modules and then paint it... 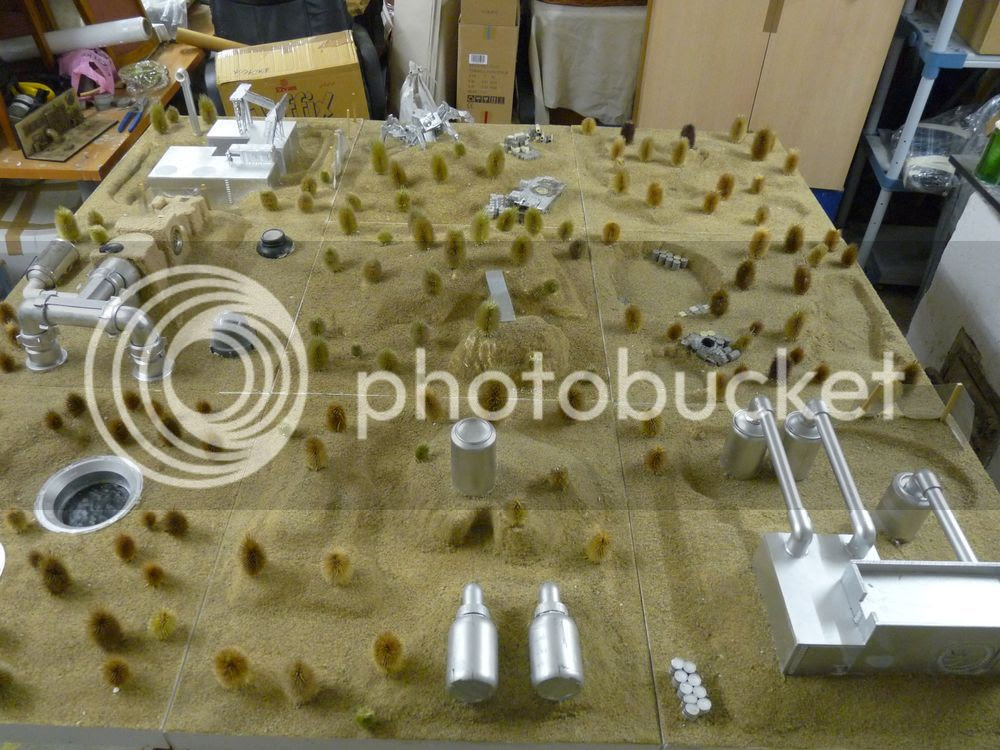 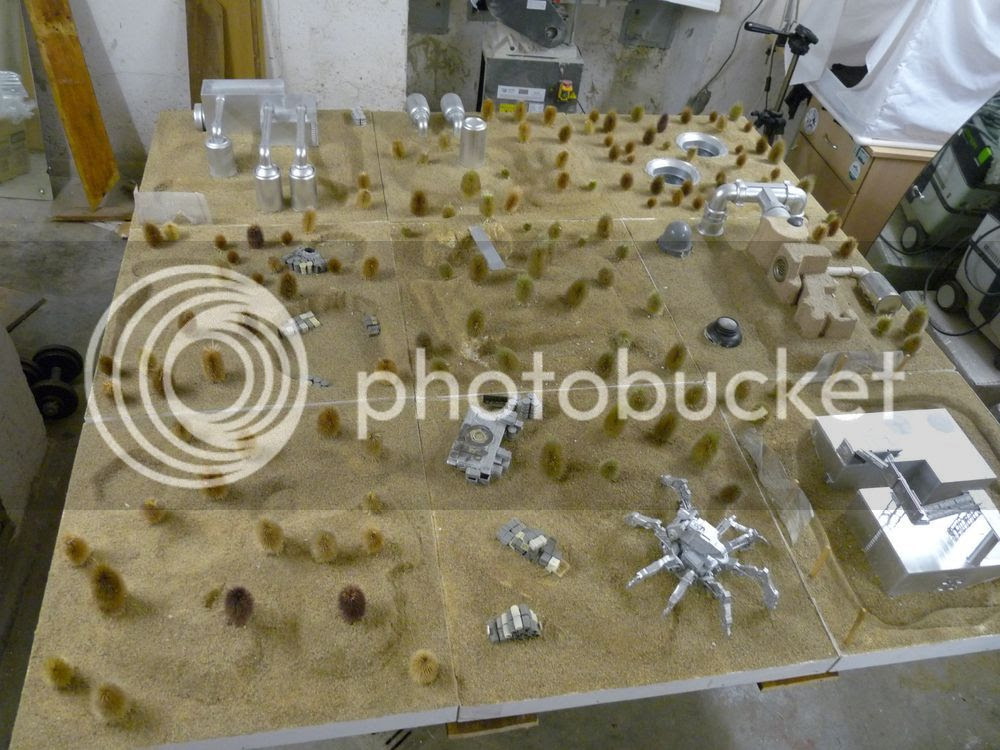 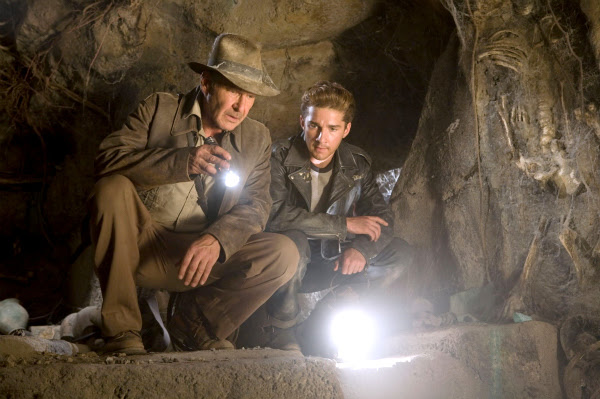 Yeah, I am still at the damn excavation site trying to take back my precious stuff from the Horrible-Post-Moving-Mess-Beast. The bitch refuses any kind of cooperation but day after day, week after week some more of the things appear so I guess having my camp fully put up it's just the matter of time.

Hopefully: you know all these pulp movies with an archeological twist - it's always nice and easy until something get's fucked ^^

Speaking of which:
while moving shit from bags and boxes to the new office I discovered some old CDs buried under pile of pencils and papers. Before destroying them something inside told me to check the contents which turned out to be really smart move.
Among tons of useless crap I found some really old hobby pics - according to the date these are at least 10 years old! Sadly I do not know who took the pictures (who do I owe a beer that is), I am very happy I got them.
It's amazing a compact disk can be actually readable for so long. Verbatim FTW \o/

The first one is probably the only photo of my old Vampire counts army.
It was taken during a local Warhammer Fantasy 2250 pts tourney (one of a very few ever organized ever...) and it was the first tournament I participated in.
And the last:
I knew very well my army wasn't assembled for power gaming and I actually didn't care getting ass kicked but the attitude of some guys playing like it's fight for the last glass of water in the desert was just pathetic.
Anyway the army was sold piece by piece in the following years (thanks Mahon!) and the only thing left are the pics below. 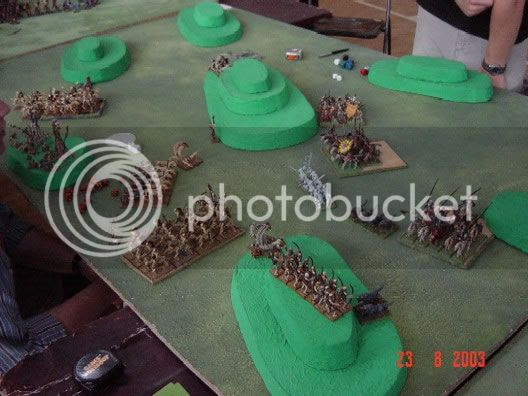 And here it's the photo taken just after the first have: Vampires were confronting Tomb Kings. Stupid look of my face say just everything about the result ^^ 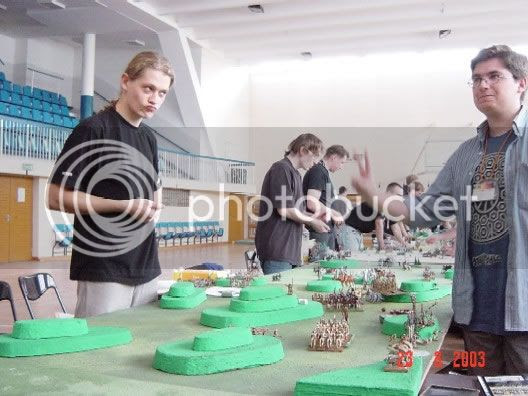 And another pic from that day - these were Von Carsteins.
I remember that day I really liked the way models were painted and converted... 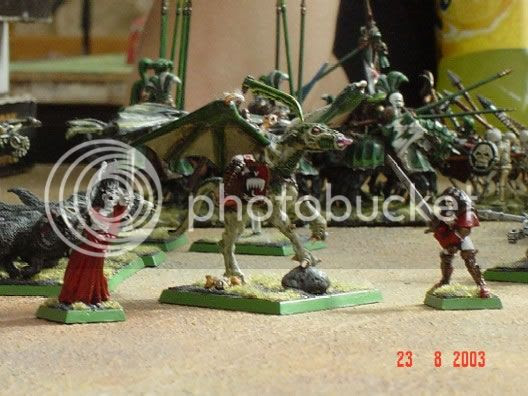 And  two more very funny photos:
this time it's part of my old Dark Legion army (good old Warzone). If I remember correctly these were painted when I was in high school and yeah, that time I was damn proud of the models. Paint from all miniatures from the photo have been removed long time ago and some of them have even been repainted. Check the gallery if you are interested. 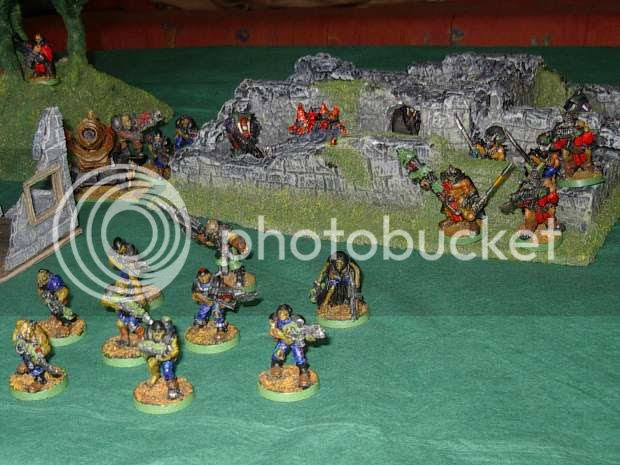 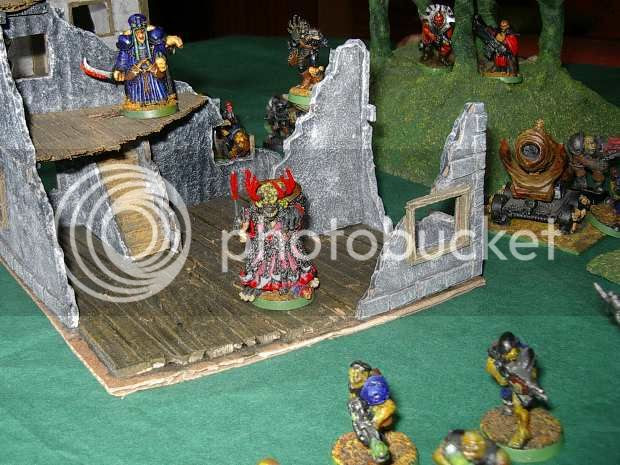 And the last horrible, cell phone taken photo for this log (not sure anyone can bear more than that). Shot last night - very early work in progress shot of "the rack" for game table.
So far we play games on battlefield made of 2 x 2 modules but since I built 10 modules (for the variety) I thought it would be cool to be able to assemble bigger gaming space. There's still lots of work ahead but there are many photos of different stages of this monster. When it's done I hope to assemble it into the article or something - who knows, such stuff might turn out useful. 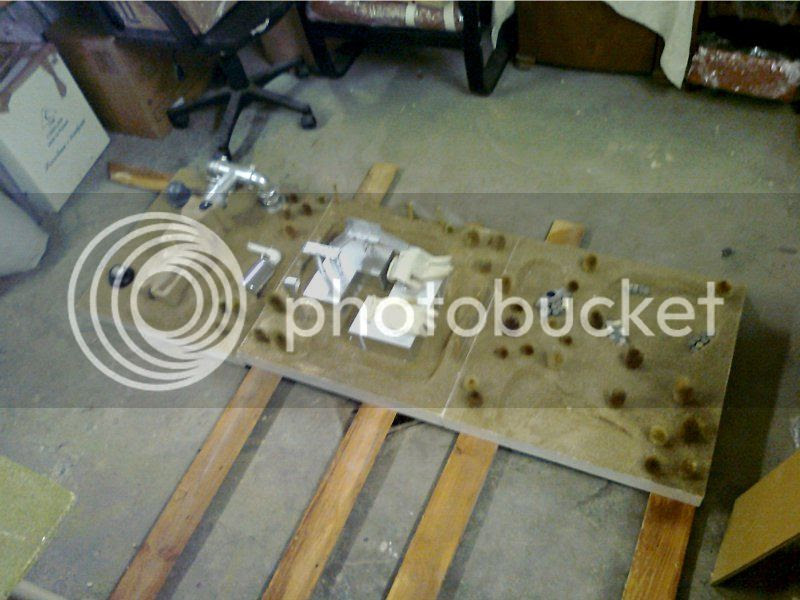 The eagle has landed

It has finally happened:
I managed to leave the rented place and moved to own piece of cave!

And exactly like I suspected before: the process was really hard and painful but I couldn't be more happy to have it already behind. There are still several boxes of my preciousssss stuff (hobby stuff of course) waiting to be unsealed but with a bit of luck I should have the painting station fully operating by the coming weekend.
Keeping fingers crossed for it!

There are still some older news which haven't been posted becuse of the moving madness.
The biggest and heaviest is the Privateer Press Galleon update.
The model is nearly done but my client wants to see some tramar banners hanging here and there. I have already printed them so all I need is to adjust paper to the arms. 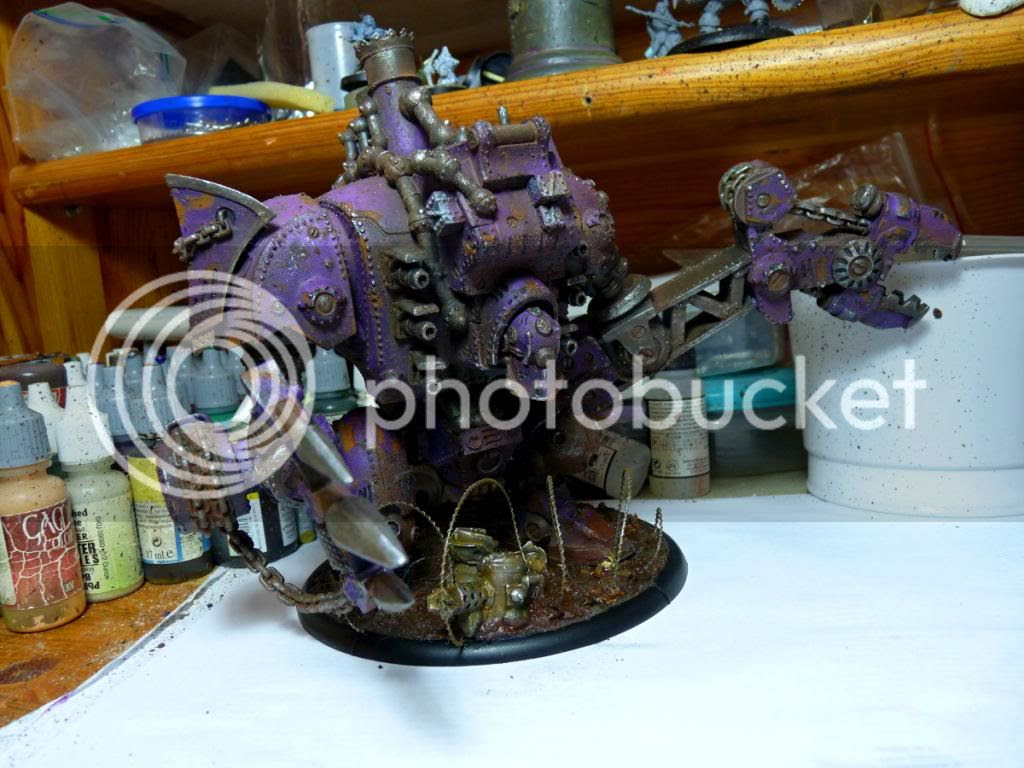 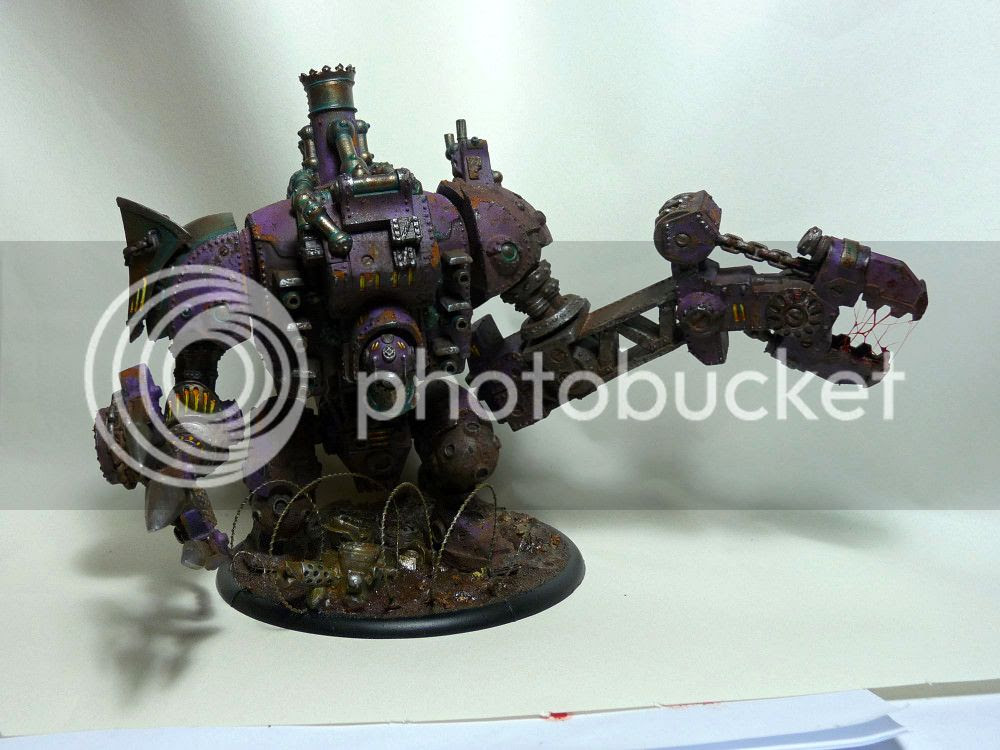 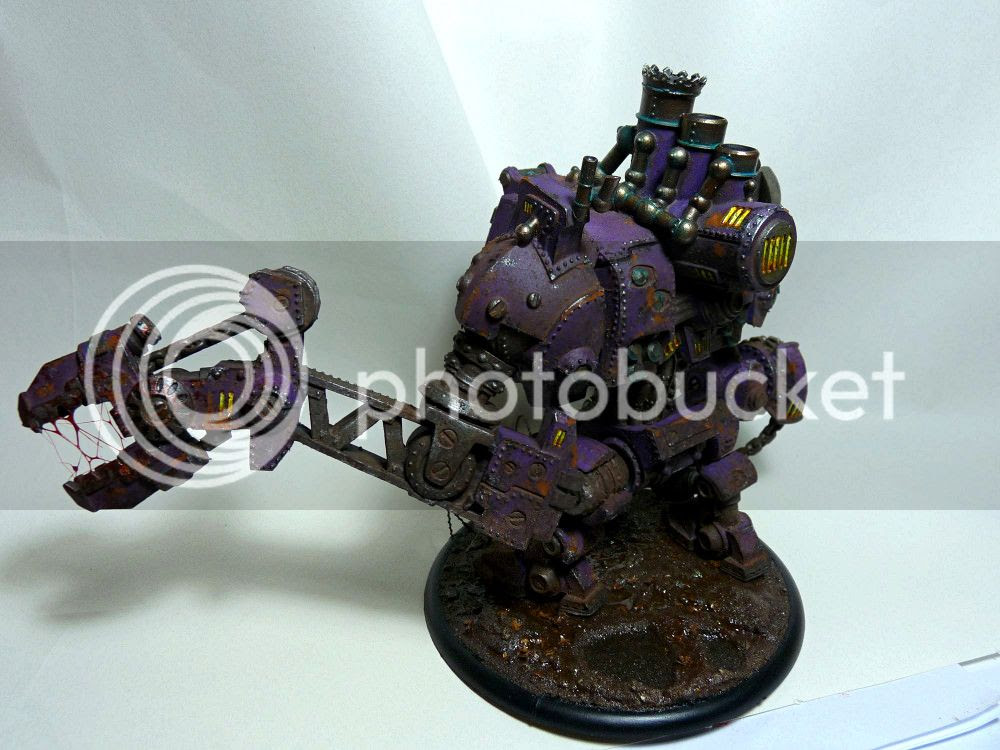 What else?
Few weeks back I found a comment under my post about Dark Age stuff left by mr Snotling from behind Poland's western border. All in all we decided to start a little painitng race since I am starting Skarrd faction and he's starting another army. I chose the model to start this little project (Raze) and even started painting but then the moving happened and whole fun got fucked.

C'est la vie. Like always.
I managed to take a single work in progress shot just before packing my hobby goodies. After moving the model got bit scratched so I will repaint it for sure.
I will also try to paint it more zombie-scavvy style instead of anything based on the official Brom's artwork. Painting all these nice and bright colors is just not my cup of tea. 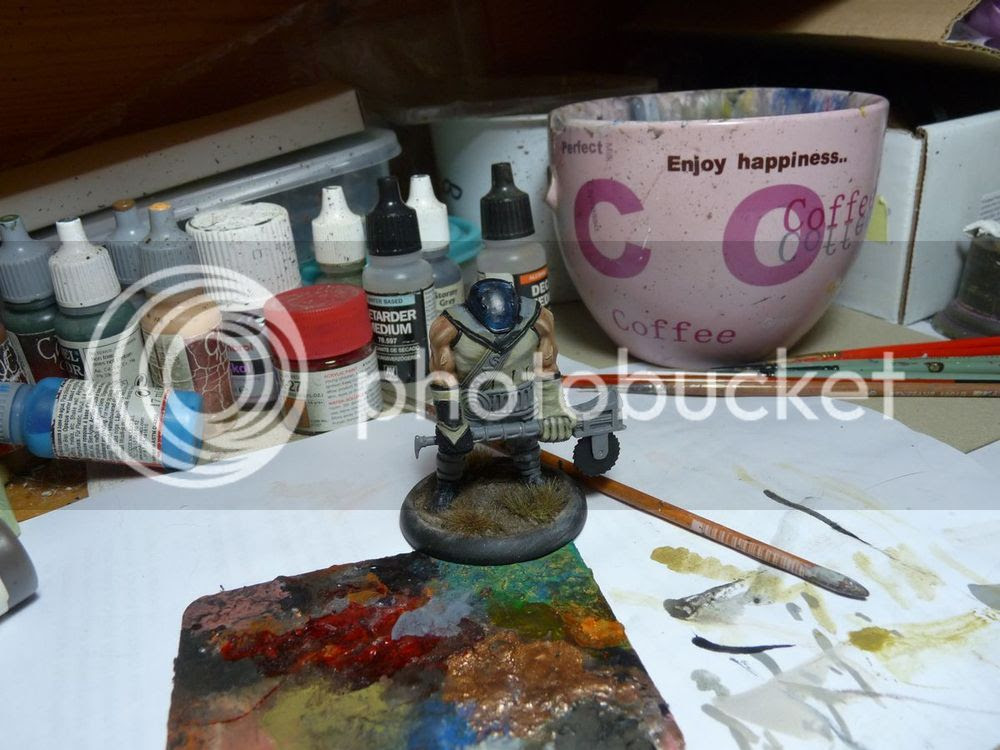 There is also small technical problem I'd like to get solved somehow - maybe some of you could help me:
Some time ago I started getting lots of shit mail on the e-mail address to which my blog was connected. I read a bit and moved whole admin powers to the other e-mail address (gmail this time). I use it for posting, commenting other blogs etc.

But the snag is I do not get any notifications about new replies under my posts anymore. I am quite sure they all go to the previous mailbox. Is there any ideas I can make notifications come to the new address? Haven't found any button to fix it.
I'd be very grateful for any help of advice.

Till the next post - again from the new cave!