Still not much painted but...

Once again I cannot report a model has been painted (which means I haven't finished a single miniature this year...) but something was going on anyway.
Let's just hope soon I will be able to update any of my galleries with painted stuff - no time for hobby is getting more and more annoying.

So the first serious candidate for paintjob is the Slaanesh terminator:
last week I think I managed to finish assembling the guy and more-less finished version is below. I realise lots of people thinks the banner is just silly idea but I haven't used paper banner for ages so it's high time for a change.
I am still looking candidates for proper standard so if you have any ideas or suggestions - just shout, I will be grateful for any help. I was thinking about sth like this but all in all "classic" Warhammer banner seem to be more appropriate. We'll see. 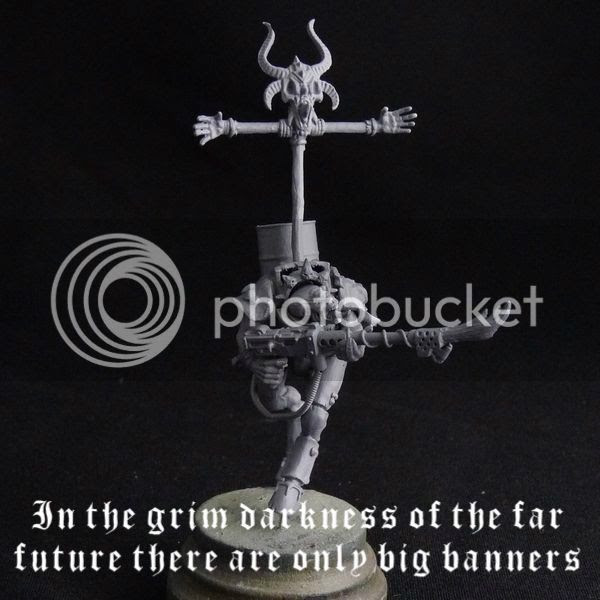 Despite time for hobby is VERY limited I am still trying not to forget how to handle a brush and recently I added more paint on the buggy I got from Artur and deeply hope to finish main works on the vehicle this weekend.
I was taking pictures of step-by-step while painting so there might be spawned an article about it when the job is done and if the result is satisfying. It was really cool experience to use some military models painting tricks on the model - hope you like the current result.

And bit more advanced wip - on the final base. 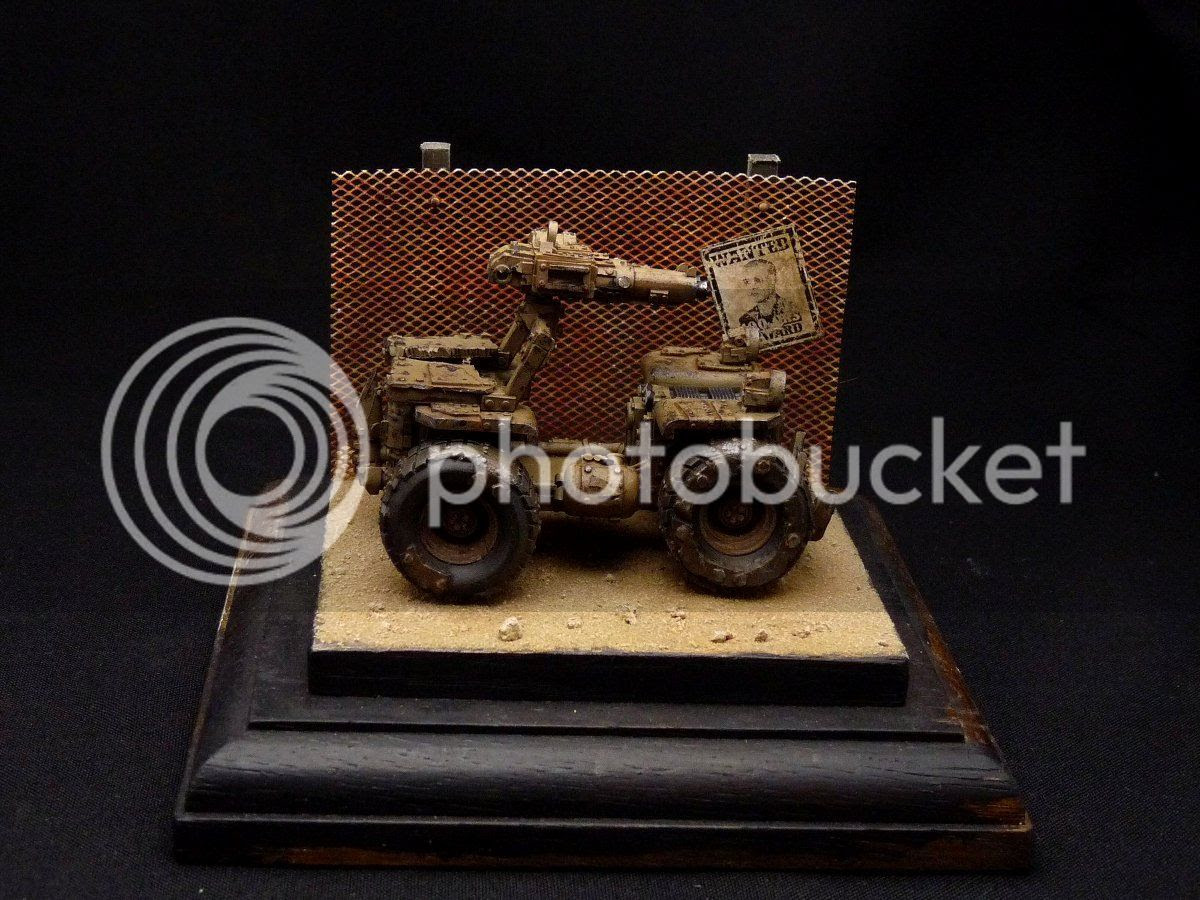 As for the gaming - my sparring partner has FINALLY found old platform he bought ages ago and moreover - he decided to sactifice it on the altar of the Necromunda modular gaming table.
Unfortunately he used superglue to assemble the pieces so I had to break it and re-assemble using hot glue gun to fit the bunker below. Another strategic spot for heavy weapon operator has just been created so the next time I have to purchase plasma cannon for my Eschers hehehe...
The pic is quite shit but it was made using cellphone only so that should explain everything. Final pics will be way better. 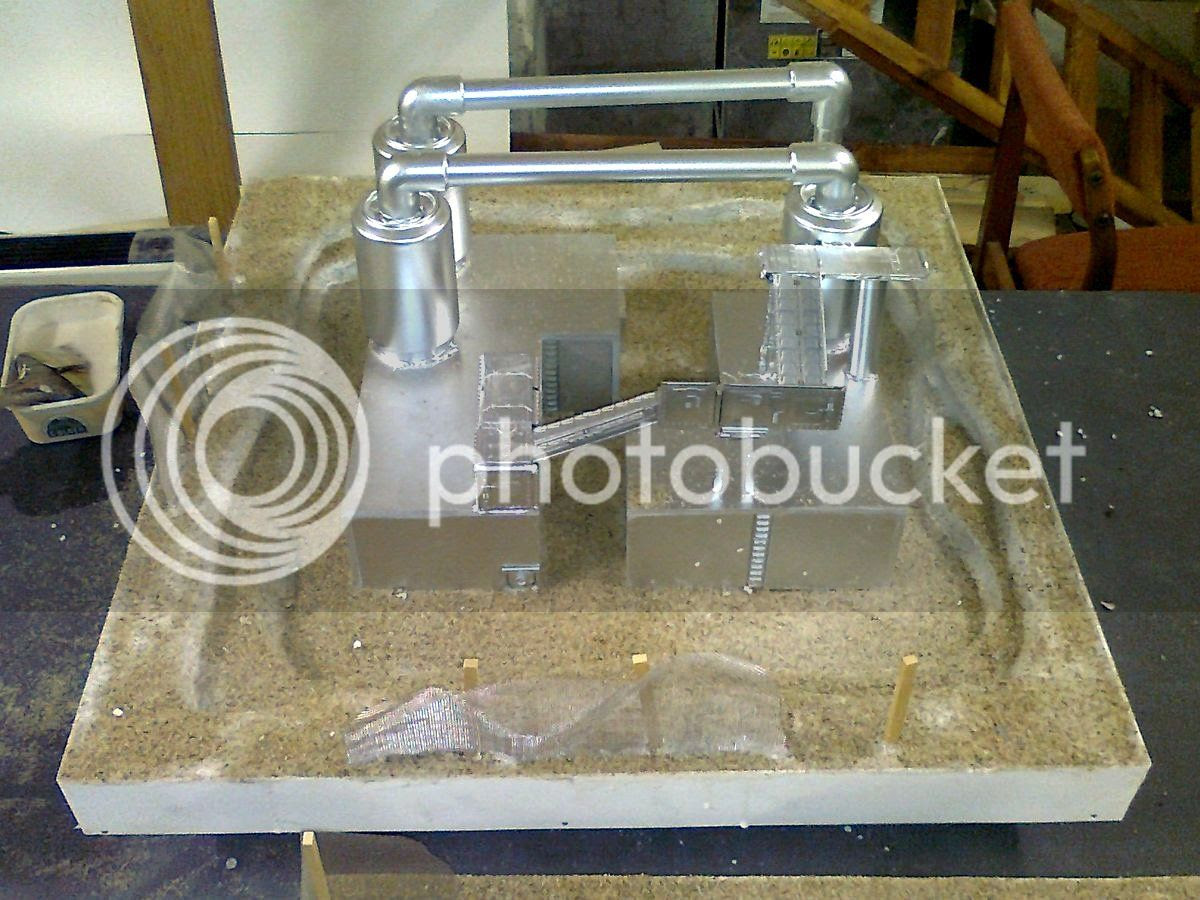 And last but not least: shopping.
I didn't plan it but it was pretty good deal so all in all I didn't resist the temptation. I got old dark eldar haemonculi (to be used as cenobite priest for small Slaanesh warband), metal Arhiman - teally nice mini to be painted and sold on Ebay and old mounted demonette (with a bit of luck I will replace the rider with chaos marine). In the Slaves to Darkness book there was sth similar in 'Eavy metal section.
Hope not to ruin the steed - I really like these ugly fuckers.

Till the next time!
Posted by demi_morgana at 11:01 PM No comments:
Email ThisBlogThis!Share to TwitterShare to FacebookShare to Pinterest
Labels: game table, ork buggy


Heya again - after 2 months long break.
There was lots of shit* going on during my absence but now I think I might have a little bit more time for myself so hopefully logs will appear more often.
But since there was something going on worthy mentioning - here's the short summary.

The most important thing - the fucking exam:
It was yesterday, made me spend 11 hours in the damn hell pit and the final result was 1:1. I passed the written examination (much better that I expected actually) but few hours later fucked oral exam. Cannot blame the examination board** nor the questions I was asked: I didn't know the answers and that's it - hope to try again in May. There are about 6 tribunals so hopefully the next time I'm gonna draw different one. Also hope to finish branching out so the next time my stupid boss truly pisses me off I can finally say: "fuck you bitch, I am off!".

During whole month spent home preparing for the big day I haven't painted a single model but got some - quite a lot actually. This proves too much time in front of monitor combined with painting impossibility can be budget devastating.

First of all I got another Necromunda gang - this time Ratskins.
I spotted these guys on Evil Bay and think I got them for really decent price especially I got almost whole oldschool Ratskins range. I already have very unorthodox painitng scheme for them in mind but before I spill any beans at least one test model has to be painted...
I hope to paint 1000 credits force within a few months so after we finish the current campaign my opponent will be pretty surprised with new threat in the Underhive - or rather: in the ash wastes. 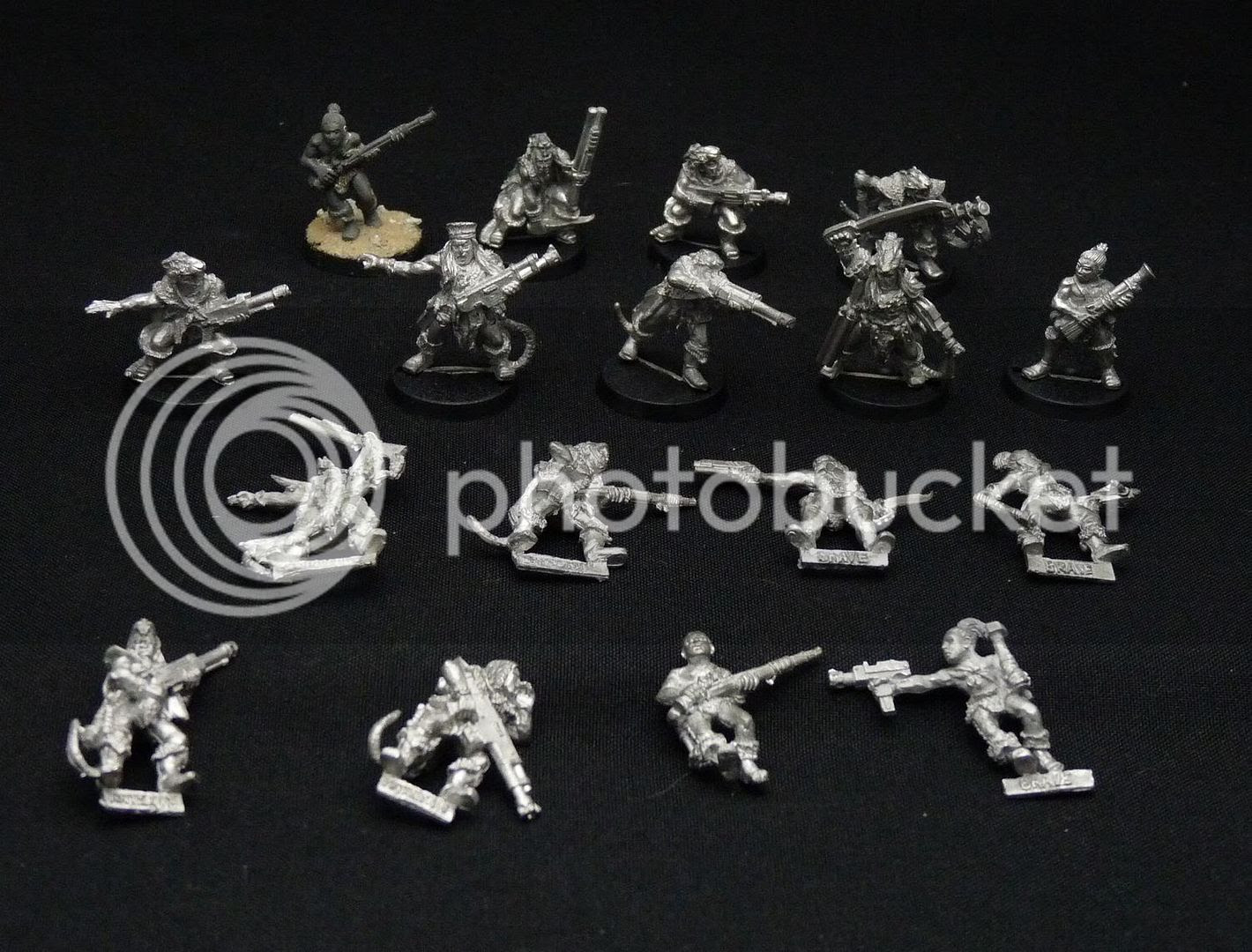 Another wallet - killer is something which made me really happy.
It's something I've been trying to hunt down for a long time and was really surprised when it turned out I won the auction: The Lost and the Damned book! The second Realm of Chaos grimoire is here for the glory of Chaos! Muahahahahahaaaaaaaa...!!! 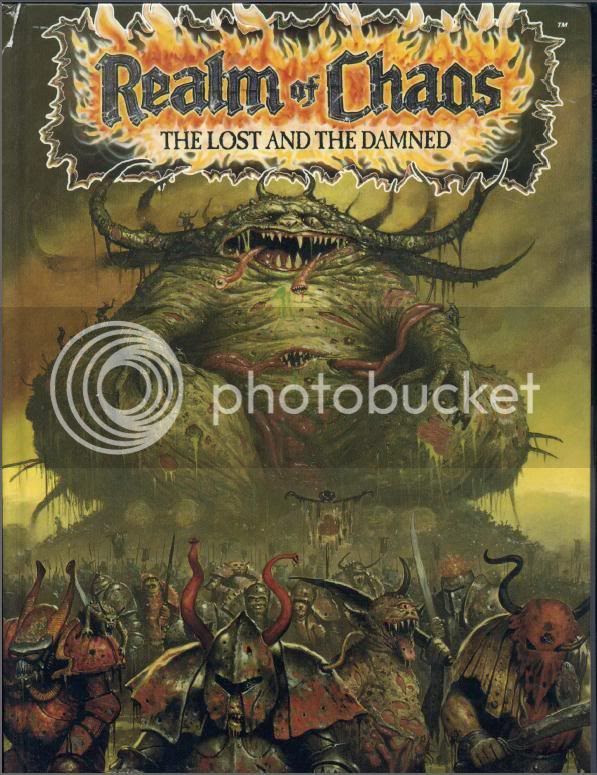 What else?
Despite there was no time for painting we managed to play 3 campain games on the still-borning table:
1. Goliaths vs Goliaths
2. Eschers vs Van Saar
3. Eschers vs Van Saar
As I mentioned before we randomly choose which of our gangs will fight the next game. During the second game I managed to capture one of Deco's gangers and luckly for me he didn't manage to save the fella during damn exciting Rescue mission.
Therefore my nasty bitches earned a few coins by selling the prisoned to slavers yet still not enough to purchase dream - weapon of every self respecting Necromunda ganger: plasma cannon.

Speaking of the table - the works are going slowly but they are proceeding.
Some more bits were attached, another module planned, some sand glued to the surface and I must say fighting on such thing is really enjoyable.
Of course there is still lots to be done but at this stage our modular battlefield looks more - less like this: 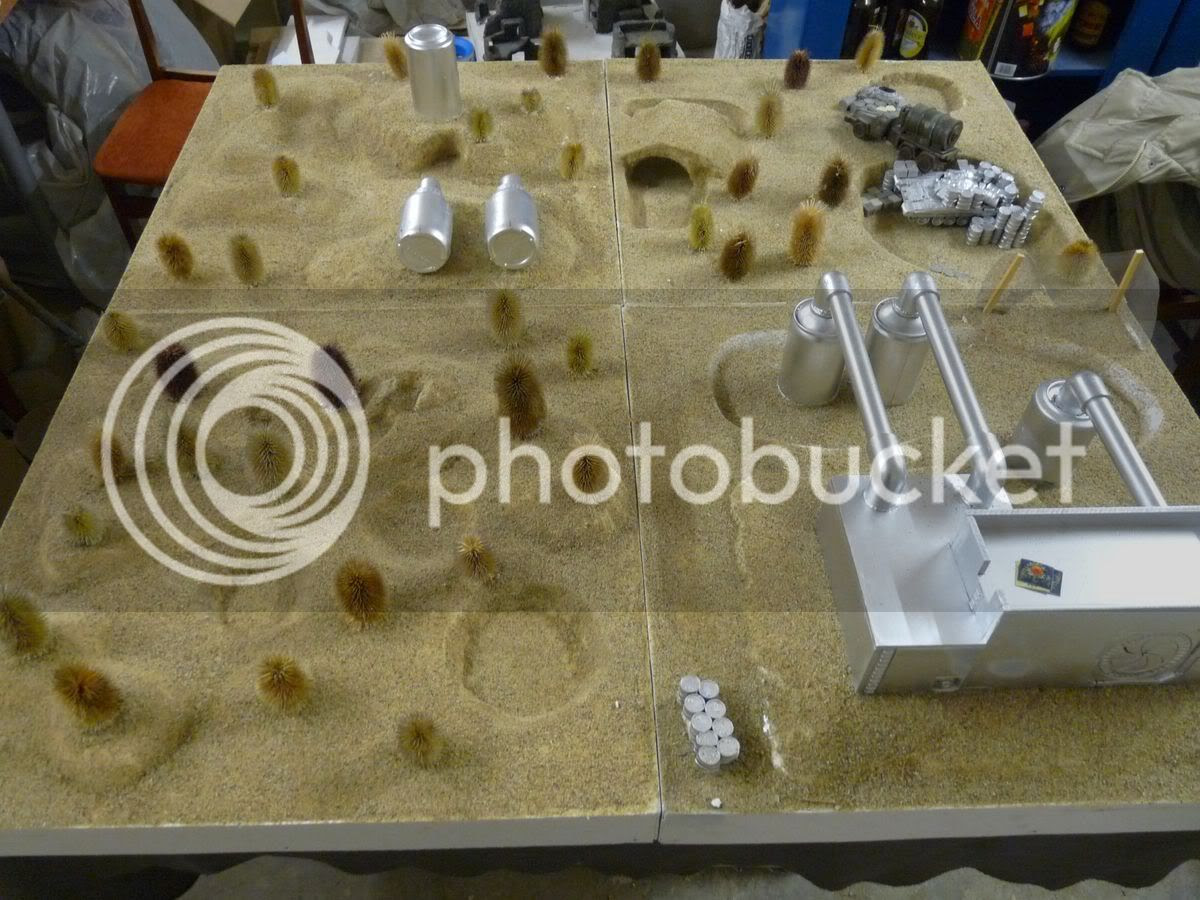 Few weeks ago I was looking for some pics of Scavvies and spotted something really cool on Dakkadakka board: it was PDH's thread about converting his very own Scavvy gang. You just have to check it!
Below you can see a teaser photo but what this guy is doing with GW plastics is just amazing! So amazing it made me to register to Dakkadakka just to give him the respect and order some bits to convert some nasty mutants here as well! I got some kroot stuff, some heads, old Fabius Bile and Arhiman stuff and few other oldies.

The first model I want to work on is genestealer-possessed-slaanesh-terminator ^^
I found some damaged parts in the bits box and it turned out with some new parts I actually might "save" the model. I was even trying to sketch overall idea of the chaos servant which compared to the current result is rather funny: 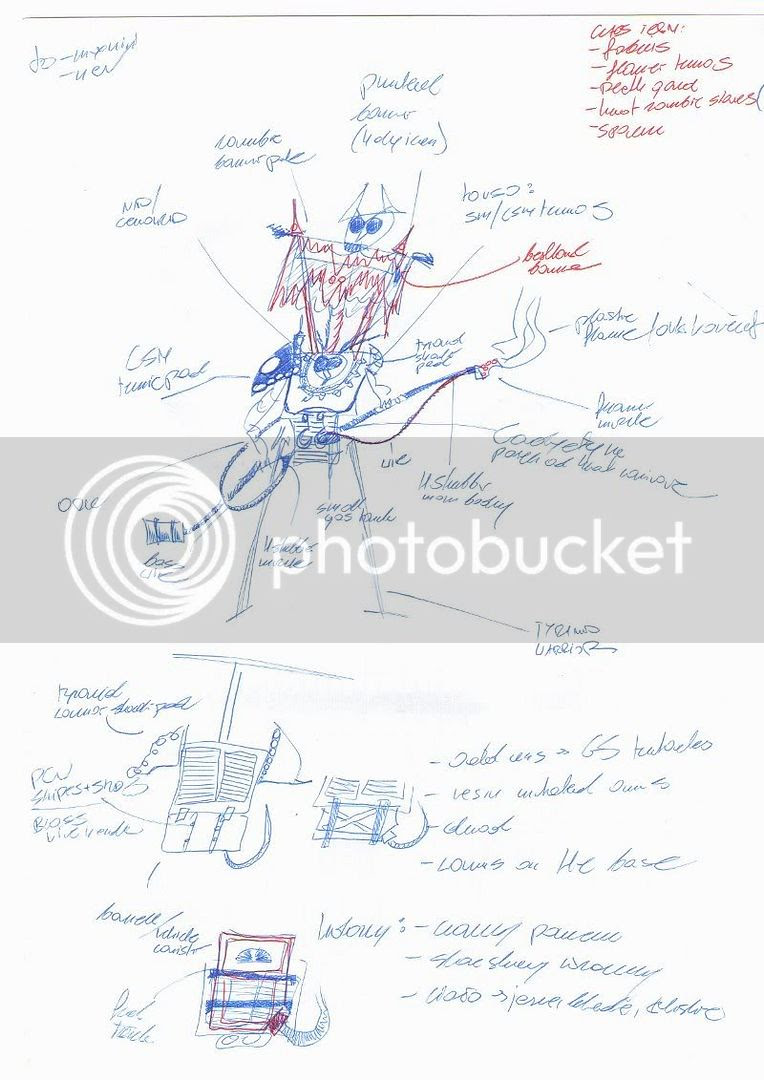 And here's the model itself.
There is lots to be planned and added so I think I will post a poll or something on forums I try to hand on to choose the best options possible espevially for the flamer fuel tank and possible banner / trophy rack. 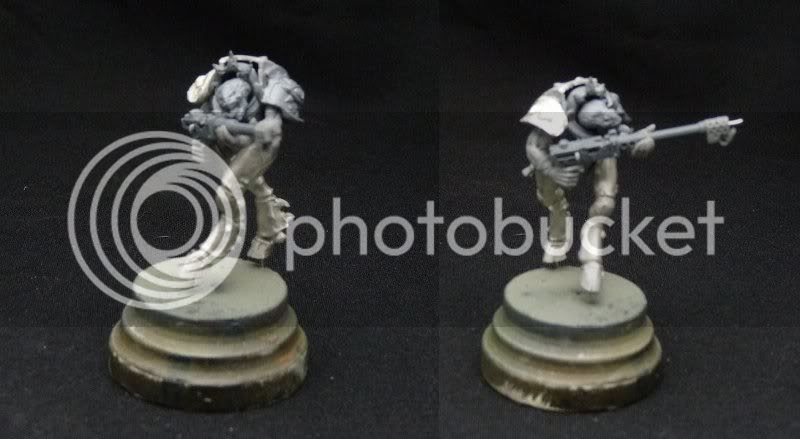 Ok, looks like that's it for the summary - 'till the next time!