Warzone Ezoghoul and some other oldies

So once again I've been dealing with piece of old Warzone history - the younger brother of Mezoghoul (still haven't figured out what was the point of producing such a huge model in metal, check it's base for the scale!).

Anyway I remember I got the model for 35,00 zł which is now ~$11, have no idea what was relation between polish and american currencies in late 90s' though. It really wasn't big price for such a large model.

I also remember my Ezoghoul hasn't seen many battles - the reason was I had terrible problems with assembling it (no driller, no greenstuff...) and also this unit was just medicore in combat: easy to hit from almost any place on battlefield but offering not much in return.
As it's easy to notice the sculpt is not exactly Rackham standard but tastes differ and mine seems to differ a lot from most painters I know.

I really had a dillema what paints I want to see slapped on model.
Haven't seen any Ezoghoul painted cool enough to make the choice for me so decision was made to use idea from the official artwork: olive-like flesh and brighter exoskeleton / armour / whatever it is. Some green tones were added to bone color to keep it coherent with flesh but I also might paint it just rotten. I want to see some brighter elements on the flesh - the olive is bit too dark for me and also want add red glaze so the flesh welds nicely with muscle tissue on the belly. At this moment red tone can be barely noticed.

For the base I used 60 mm placcy one from EE dreadnought - it's already slightly elevated and makes the figure much more stable: it's gaming model so I don't want to risk it falling down every time shit hits the fan in the heat of battle. Since there's still plenty room on the base I think I might place there spare necromutant or zombie solider: it will show true scale of the beast and besides it's another good reason to finally paint some old lead soliders.

Here's the wip shot of the pony...

And here's the same pony but in bit more advanced stage:

But there's more!
About week ago postman delivered small parcel from Holland. Inside the box there were some models traded for painted Supreme Necromagus from my collection: 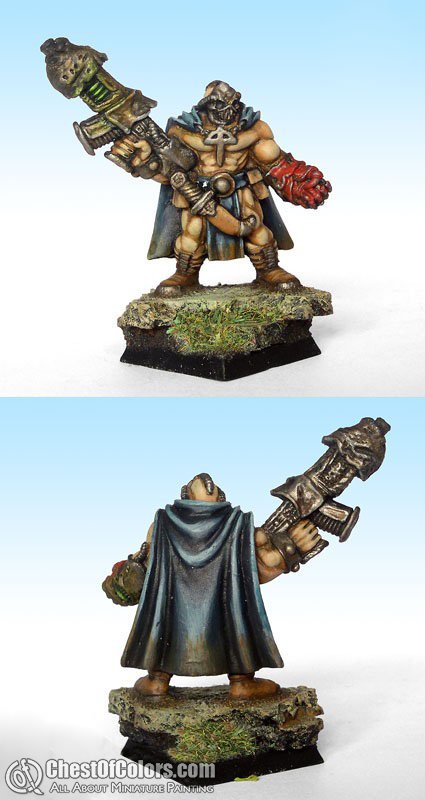 The story behind it started few weeks earlier:
I mentioned on official Prodos' Warzone forum I'd like to trade some of my painted models for missing toys and Malebolgia replied. You might know the guy from Frothers or Lead Adventure Forum (whole that so-called web world seems to be smaller than I used to think).
I was offered some oldie models to choose from so in the end I got these:

I chose some missing sculpts from Warzone range (still looking for Immaculate furies variants btw) and also some pretty interesting sculpts from other manufacturers. And since we're at interesting miniatures theme - recently postman delivered small parcel from Germany: this time there was copy of wicked moon plaque + 2 small models from Hamburger Tactica event. All sculpted by Vikotnik, really cool person I met on Lead Adventure Forum. If you don't know him by the name you might know him by his works: Shadow of the vampire and just amazing monochrome Nosferatu gaming board.

The vampire and moon-head fella came as the bonus, what I found really useful is the plaque. Some time ago (like year ago?) I was trying to assemble small Mordheim based greenskins band. I don't play the game but painting themed stuff is more fun than just random models for display base and besides - Warhammer 5th ed gobbos are just fucking cool :)
I only managed to paint 2 models of the chosen 9-10, that's all I had the steam for. But now I think I can come back to the band by building display plinth for them - big moon on dark background should be quite eyecatching piece in the glass case.

Hey all fans of old lead!

The holiday is finally over so I am back to the office which should provide some spare time between browsing papers for updating the bloggy.
So without unnecessary babbling - here are some facts about what's been happening recently in my hobby.

First of all is something I forgot to mention about recently (probably because I was totally overwhelmed by gaming table). Driven by nostalgy for old times, games and models I managed to get some Warzone books from Noble Knight Games store.
We don't use first edition rules but there's lots of reference materials like photos of painted models and fluff inside. Whole thing combined with quite low price (like $4,50 for a rule book) was too mesmerising for me not to fill the e-cart.

And about week after placing the order I found set of second edition Warzone books on local auction. Once again the price was totally acceptable for me even though we've never played using these rules. Some really great models were released for WZ#2 so it's great to have them gathered in one place.
On my book-shelf =]

What else?
Ah yes, last Saturday there was Warzone game in the cellar!
That was pretty significant event: it was the very first game played on new modular battlefield and also the first WZ game since ages, really cannot recall when exactly we played before but I think that was somewhere about first edition era? Probably.

As for that test game - it was kinda odd. We were both looking for some fast, furious and exciting match but in the end the game was like: both sides advance, both sides cover behind terrain features, there's a fire exchange and that's it.
My first thought was it was just disappointing but then I thought it was just a test game, my opponent didn't read the rulebook and most important: we both fielded forces based on cheap, large units. All models started game on plain area of the table so what else could they do instead of looking for best shooting positions possible?
I think game has the potential. Hope to discover it during the next game.

I managed to take some shots from the game - it's nothing jaw-dropping but:
1. it's a proof the game actually happened
2. it's another attempt to practice taking combat pictures (all in all I am satisfied but I'd also like to give tripod a try). The next time I will try to enchance photos with some GIMP manipulation - they are a bit too dark but using flash gives even worse results.

And the very last thng for this post.
After finishing the most cocky nepharite in the Mutant Chronicles universe I started digging in the lead piles looking for something suitable for painting. There were some serious candidates but the final choice was made with small help of guys from Prodos Games official Warzone forum.

The choice is Ezoghoul.
I remember when I got the model it was huge pain in the ass for me to assemble it anyhow: during those dark, medieval times my only assembling material was super glue. Correct: no hobby drill, no green stuff... Probably that was the reason the model was fielded only very few times and after one or two painting attempts it ended up in on of the junk boxes.
It's sword arm was brokem, the back "blades" (I still have no idea what that fuck is that part) were lost so it's furure was painted in quite dark and depressive colors.

Until I moved out.
I remember while packing junk boxes I found missing parts and since I've already had Dremel super-duper-drill I decided to give the pony of Algeroth a chance.
Good old metal model!
Pinning it together took me like 5 minutes only. The only additions are gun barrel (borrowed from EE melta gun) and round, 60 mm base. It's mostly for gaming purposes but also I might add some other human size model on it when the paintjob is done. There's lots of deaders staggering around my place aimlessly so they should appreciate company of big comrade.

As for the dude on the left it's also one of the old farts I'd like to see painted in the display case some day: Cybertronic's Eradicator Deathdroid (yup, also old Warzone range). The model has just been stored in the box for a long time but I finally decided to assemble it - aparently it takes benefit from good mood caused by recent Warzone match.
It's a second hand mini therefore it's slightly not complete: it had no right arm. I got this piece re-casted but I don't like it too much so I think I will use some placcy parts and add heavy machine gun instead of the flamer.

The game table is done!

More less, but definitely much more than less finished and ready for gaming.
But let's keep that cherry for the dessert.

First thing to be mentioned in the post is Chaos dragon - project which I've been working on for quite a long time. Funny thing but exactly like in case of the Zombie dragon painting small models and terrain building was fun, painting the big beast is just huge pain in the ass. I have absolutely no heart for painting this dragon which is kinda sad - it's one of my favorite EE models from the 90's.

So far only basic flesh tones were airbrushed as well some bone pieces were basecoated - it's going into Slaanesh style with no doubt. The beast was standing alone on work-base for some time so I decided to put in on the display plinth already: first to make it feel less sad, along and pissed and second - I was hoping this would give me hobby engine enough steam to finish painting.
I was wrong.
But since the end is so near it's just the matter of time to see the model painted. Hope you like the work in progress picture.

But since the last post I managed to finish something.
Something rather big (compared to humans in that scale), fat and ugly. Fuckin' ugly!
Nepharite of Demnogonis from old Warzone range.

Again there's short story related to this old junk.
I got it few years back long after our Warzone gaming group fell apart but while we were still into game that model was rather hard to get for me. Despite model is damn ugly I've always wanted to see it in my glass case painted so here it is.

And scale shot with 3 plague zombies from Necromunda. Power of Demnogonis is so strong the Nepharite can control deaders (and 'uuuge worms) from different game systems.

As for the painting - before I examined model carefully I was suggested by official paintjob the guy wears no trousers - it's legs were painted same color as arms, head and belly. So while I was painting and realised there should be trousers I decided not to repaint flesh tone already painted but instead added one more nasty detail of the model so there's no doubt about the clothes.
Nor about the sex.
Click  - if you dare! =P

And the last thing for now - game table.
Last weeks I was coming to the gaming spot often before starting the job and late nights to finally paint the modular monster.
The base works are finished so there are just details to be added (small terrain fearures, posters etc) but it's already finished enough for gaming purposes.
It took quite a long time to assemble that battlefield but I took some wip photos which should be enough for separate post. I am kinda glad my short vacation is over so I will have plenty of spare time in the office to write that thing.