Here! In my gaming place!

Redecoration of my very own room is finished (finally!) but while the works were progressing I had to take out my whole stuff from there. The painting desk was moved into corridor but even though painitng conditions were quite poor I managed to finish something: warcaster Nemo from Cygnar (Warmachine).

The model belongs to my buddy, wargaming veteran as well, and since I kicked Nemo's ass during last game* I decided for little compensation**. Besides I really like the model (all it's versions) and painting something vivid is constantly a very nice change for me.

For the photo background once again I used display "wall" about which the tutorial was made some time ago. No idea why but taking photo using such scenery is much easier for me than photographing minis using printed background. Just check the pic below:

And this made me start thinking about building another themed background. This one works really well but taking pics of fantasy models in such enviroment is just odd. At this stage it's just an idea - haven't decided what fantasy theme could be used: some grassy plains and some stone in the back? With cave entrance? Or maybe piece of brick wall / fantasy building? With stone made street - kinda fantasy urban enviroment.

If you have any ideas - throw it in the comment. Whatever it will be it sounds like a good material to update the tutorials section :)


What else?
Ah yes - shopping. I don't even try to lie myself anymore about not purchasing minis bullcrap. The addiction is way too strong, it's been growing for many years so now there's no turning back for me.
About 2 weeks ago one of FUUK users posted list of oldie stuff for sale. All I needed was 5 seconds to send a PM to the guy. My first must have choice was set of Valhallan tank riders. Basic plan was to upgrade Chimera apc built for Necromunda campaign but then I thought it would be cool to finally see my Valhallans squad painted so I might get them new wheels (errr... tracks). Havent decided will the new vehicle be another Chimera or maybe sth bigger, like Leman Russ. It all depends on which junk can I get - it will be heavily converted so don't need brand new and overpriced EE toy.

Other models I got are old Terminator Chaplain and metal supercool hormagaunts. The plan is to add these to my planned inquisimunda demon hunter party. This will be gathering of old and cool sculpts which will be either personalised Necromunda gang or (which is more probable) will just end up in the display case (unpainted - and this is even more probable).

* which was the first Warmachine game for about 2 years!
** that "last game" was Thursday night last week. Last night we played again: Cygnar led by Nemo vs Iron Lich themed army. It is the truth painted models fight better - all was fine until I stupidly placed the caster in front of my army and when the glorious victory was just at hand - Iron Lich got boosted bullet from Hunter jack between eyesockets followed by Nemo's lightning bold. And fucking died...
Posted by demi_morgana at 11:57 AM No comments:

Finally I can paint something for my very own display case.
And that's because mr Eando Kline has been finished and the model is on the way to it's owner right now. As for the commission: my version definitely differs from Derek Schubert's, and don't think I would ever try to compare myself with that guy, but I like the result achieved. So does the client which is all that matters here.

Painting this piece was fun - first because Eando got dedicated display plinth, so he can comfortably rest after coming back home from thrilling adventures*. Second - it's always fun to paint something other than zombies and mutants (on the other hand I cannot wait to finally come back to my zombie dragon project).
Anyway here's the guy - the gallery has been updated. 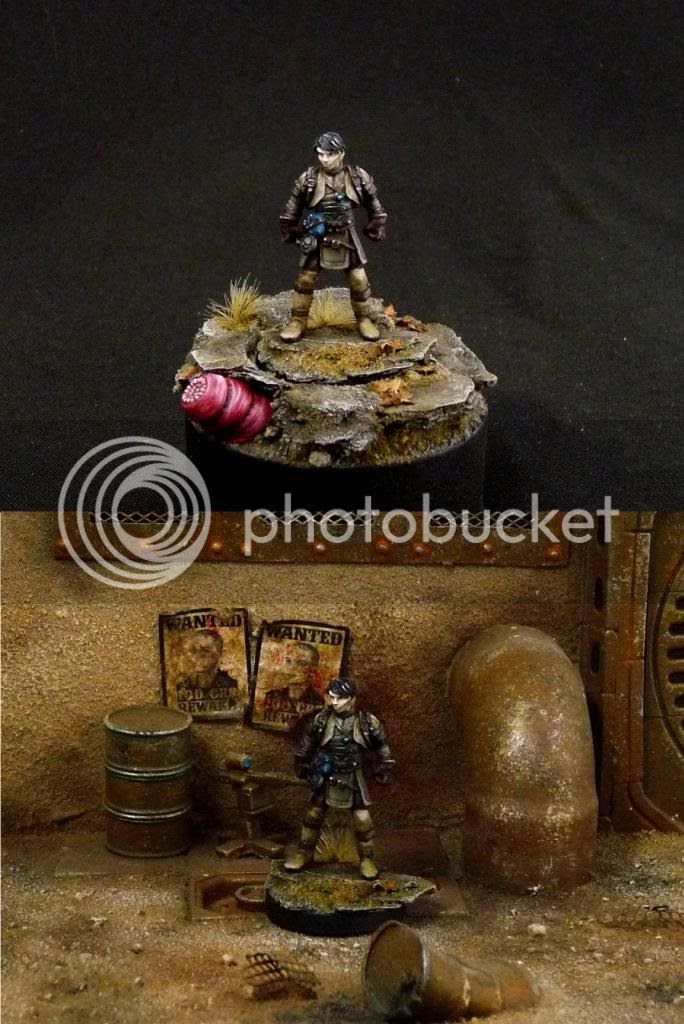 There's another gallery update coming with this post: Cankerworm.
As mentioned before the model will be auctioned OR will be a prize in Battle for Hope Warmachine tourney on December 7th - 8th in Ft. Worth, Texas. I thought because the reason of the event is laudable, my model should be something more than just another gaming piece. Besides I got another opportunity to use one of remaining resin bases from not that far past, when Plinth Country was still alive.

The model turned out dark - that's probably the reason most pics taken turned out rather crappy. And that's also reason I took the pictures using different backgrounds. The juicy orange on oil drums was made using real rust powder, that stuff looks really nice straight from the box or mixed with powder chalk. All you have to remember about while working with powders is either to apply some turpentine to prevent powder from falling off, or to spray the piece with varnish. Here's the worm: 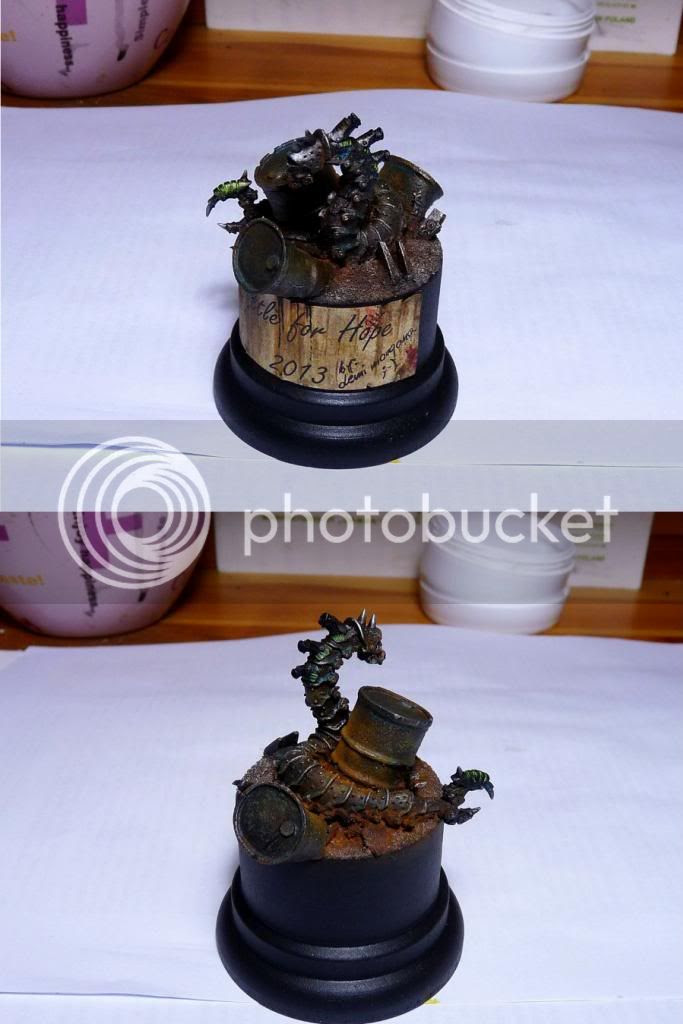 And the last thing for this time.
While I was finishing Eando I sent an email to the client with some work in progress shots. Waiting for the reply I found some spare junk, which was supposed to be used to upgrade my modular battlefield. The battlefield is more-less done (the construction part only that is) but it would be just a shame to waste such a nice pile of junk.
So I thought it's time to make my painting desk bit more organised and shortly after that (and after some lovely drilling time) my very own paints rack was spawned.

Which means there have been 2 pair of racks posted in the whole history of this blog. The thing is getting pure pr0n...

The rack was just pinned and glued. It's not supposed to be nice looking but maximum practical and fitting the limited space on my desk. I think I might give it some paintjob sometimes - black and yellow warning stripes a'la Necromunda seems to me good idea... On the other hand everything related to Necromunda is good idea ^^
If I ever decide to make another I will take some step-by-step piccies, there are some things I'd prefer to be be done slightly diffrent (and better - let's be fair) but that doesn't matter now - it's not a damn beauty contest. 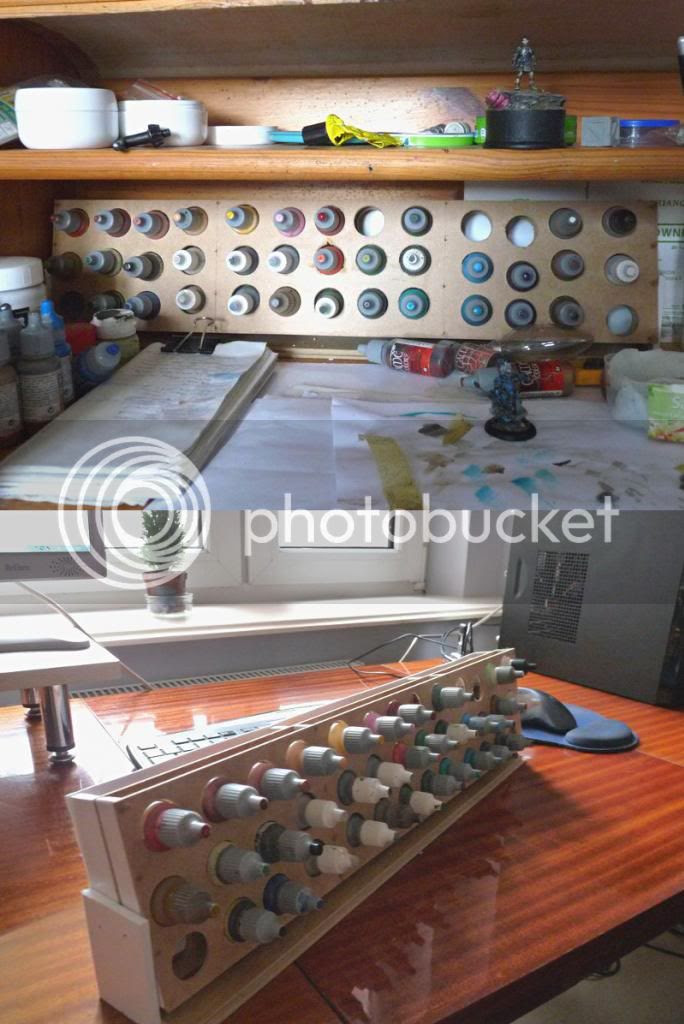 *And yeah, to compensate the client whole delay caused by my moving.
Posted by demi_morgana at 2:59 AM No comments:

Just to keep the client informed

Well this time there's no spectacular post:
the main reason is I want my client to know there is something going on with his model.
And there is:

Eando Kline has already got the bases (both gaming and display) but I also managed to slap some paint on the sculpt itself. Which is quite remarkable thing because I was left with the kid for a few days. Which means no late night painting sadly...

During painting the piece one thing came to my mind: next time before painitng anything else from Reaper range I will think twice. And one time more just to be sure. These sculpts are very detailed and sadly I don't think my paint-fu is good enough to provide proper paintjob.
It might be this or fact I simply prefer other toys. Whatever. Commission is commission so the model will be done. 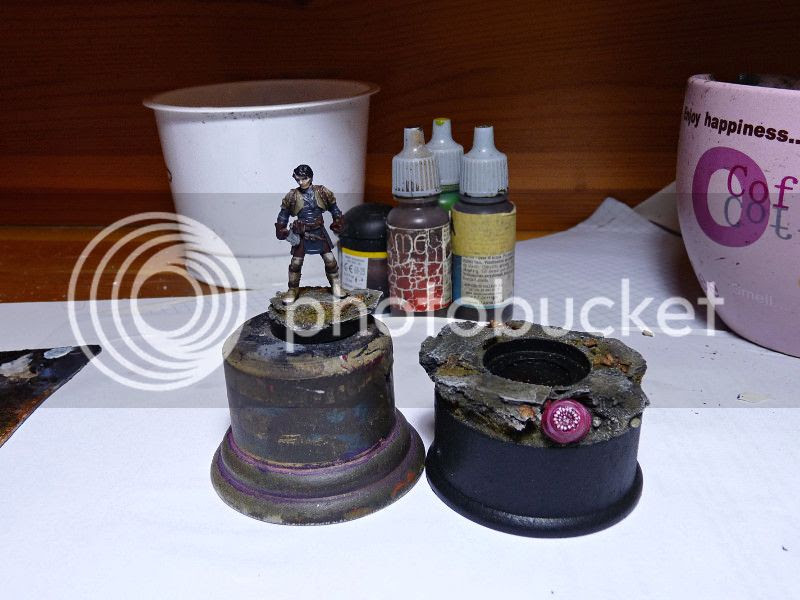 Another work in progress shot is the Cankerworm for Battle for Hope December event.
I've been assembling the base while waiting for paint on Eando to dry, so right now there's only some sand, glue and basecoat. But as you can already see I decided to give it the base much more my style: rusty and dirty.
Bright orange pigment made of powdered rust (no shit) should look really striking and imo really nice applied on dark metals of the worm. I think to make it more striking I will also enchance the OSL painted so far.

I think I should've asked the BfH guys weather they prefer getting gaming model or display / souvenir one. But then again it's a charity piece so the potential owner shouldn't mind. Hopefully ^^ 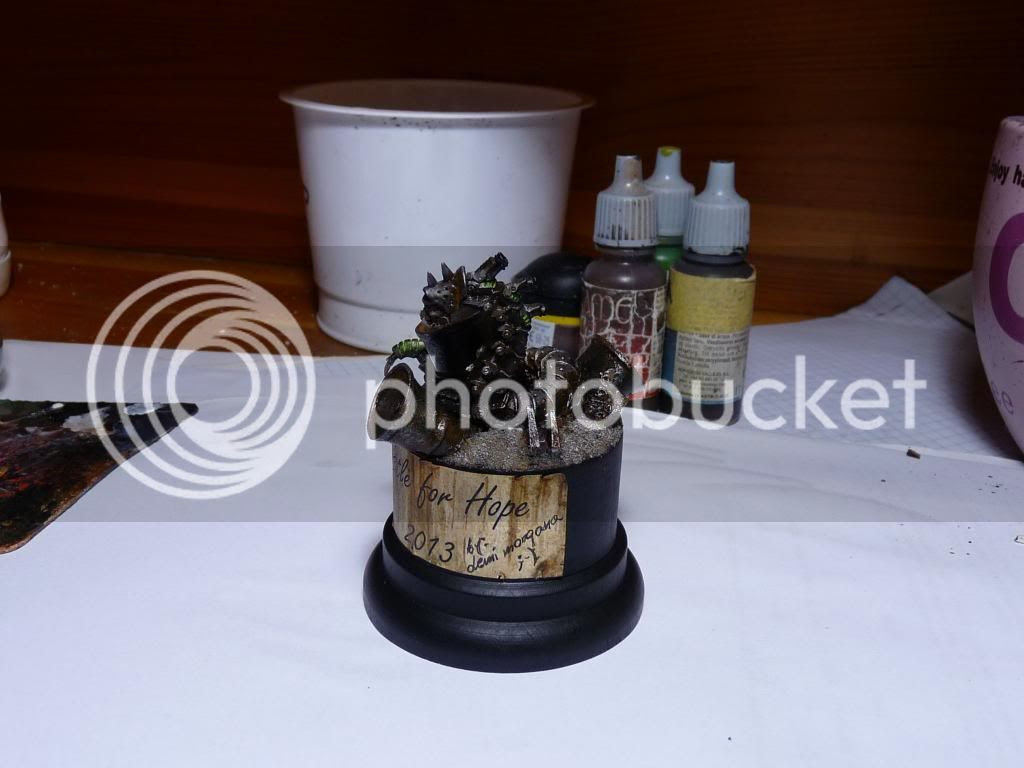 Whate else?
Just some random crap. For starters - my old, trusty display case has been upgraded (elevated on the drawers + inside lights added) and installed (screwed to the wall) at new place. As you can see there's still lots of empty spaces inside - I haven't got all the toys from the moving madness yet.
The need of modifications was the safety. I saw my kiddo running around and bumping into furniture and because of the thin glass - any unfortunate accident could have very severe consequences. Both for him and for me. I think I will also change the study door lock as well - you can never be sure.

Last week we had Halloween. For me it's still strange to see trick-or-treaters running on streets in the evening, I just do not buy it.
I think the whole celebration here is failed attempt to import another opportunity to make people go to malls and buy tons of useless shit (like costumes for kids and pumpkins). But since I do not participate in the circus - it's not my business how others spend time and what do they spend hard-earned money for.

Just before moving I got a pumpkin from my friend and frankly had no idea what to do with it - until the last Thursday. I didn't plan eating it so decided to give a try to work on it with some knives. In fact it was my very first Halloween pumpkin ever made and as for total beginner I am quite satisfied with the result. Sadly all my efforts didn't impress my kid (he likes it but wasn't scared at all) so it was also the last carved pumpkin for me. 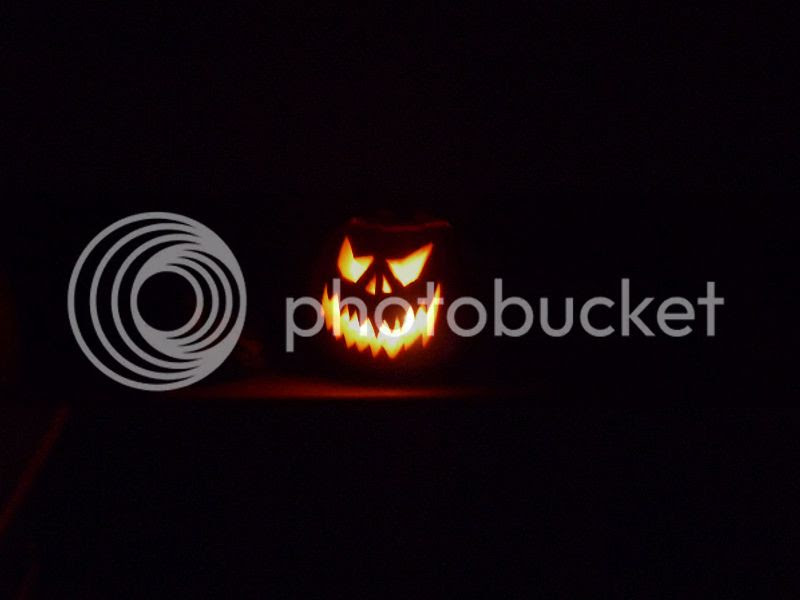 And the very, very last thing for this post.
Last Thursday we finally got the opportunity to play Dark Age: Skarrd vs Forsaken led by St. Mary. The game was kind of test - sadly the first impression wasn't anything special. I got feeling the game was simply slow (probably because I used to play lots of Warmachine earlier). But after pushing models on the table and rolling some dices I got better idea about the rules and units' possibilities.

Right now I know we will probably give the game a chance or two before we decide about supporting it or not. I also know Skarrd Father, no matter how nasty it looks, can be torn to pieces by bunch of frenzied Strikes. And that St. Mary is one nasty, tough as nails b!atch.
Hope to kick her ass shortly.

Laters!
Posted by demi_morgana at 12:42 PM No comments: