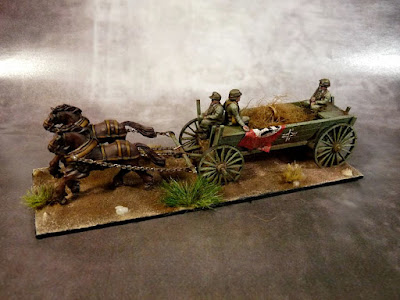 A while back I painted Jagdpanzer 38(t) Hetzer for my brother's birthday. Since then he strongly expanded his German force and because his big day is just ahead I decided to prepare something special...

This time it's in my opinion one of the most pain in the a$$ model available in whole German army (or any army which can field it): horse-drawn limber (proxy-ish...^^).

I mean: sure, it cannot tow heavy artillery, it has no gun, it can be taken down by infantry fire, it's huge (the biggest-base model for Bolt Action I painted evah!), buuut...

It costs 8 points! Got that? You get additinal order dice for 8 pathetic points!

As for model itself the construction is based on Black Grom Studio cart which I got a while back. It's been used as terrain piece for a while but wanted to make of it something better than just one more cover for infantry. Horses are from black coach set I painted long time ago - no idea what's the manufactuter of the set, it was painting commission.

Now looking at it I want to paint something from fantasy range again... Cute, eh? 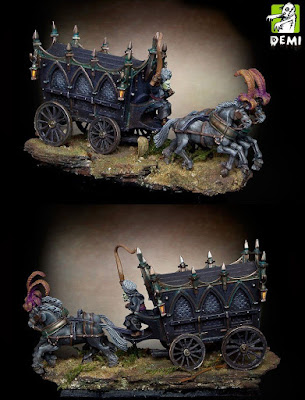 The crewmen are most probably from Rubicon's vehicle: friend of mine is much more player than painter so he didn't mind sharing spare Fritz, Heinz and Adi with me.

Painting is nothing fancy:
wanted to keep limited palette so it looks cool standing among rest of German models but to make model more eye catching I added the nazi flag and some gold shining from under hay. These guys were probably looting and now trying to get back to Berlin...
Hope you like it, hope my brother likes it but I really, really hope to see it on the battlefield shortly so I can wreck it! 8 points!!!
Unbelievable!!! ><
Some work in progress shots: 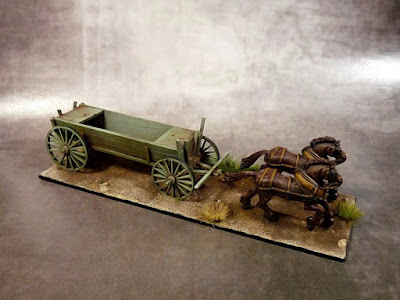 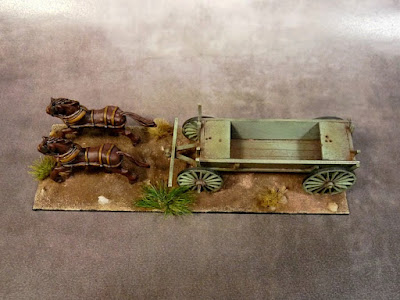 Soviet infantry looking for the gold: 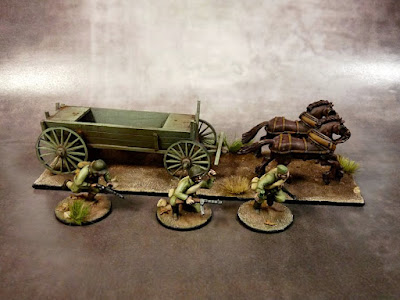 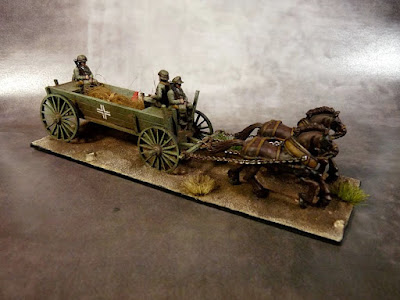 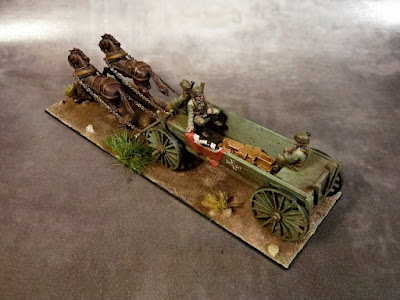 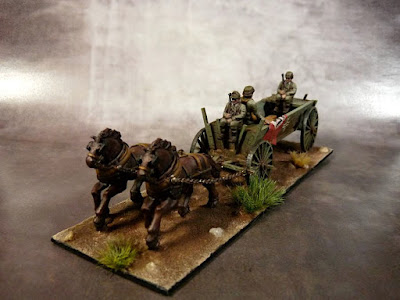 I made hay and gold removable so in the transport other supplies: 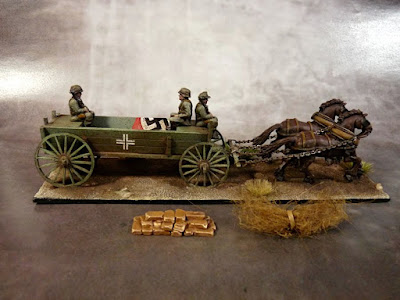 Quite big - which makes it even more useless on the battlefield... ^^ 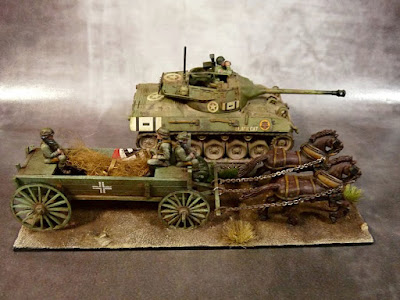 Hey,
This time it's just quick update of project started long time ago : soviet fuel truck.
The model was half-assembled few years back as base for our Necromunda project, sadly I didn't manage to finish it off before we moved to Bolt Action ^^
It's skeleton has been staggering in the bits box 'till last week I decided make something useful of it. It turned out I lost pair of wheels so decision was made to turn it into wreck:
there's never enough of painted terrain features after all!
Model was roughly assembled, then broken a bit and attached to PVA base.
Base colose were nice but I screwed the color with overdone use of pigments and oils:
it was supposed to me dusty, but turned out dirty muddy instead...
Oh well - it's only terrain piece.
All in all I am kinda pleased: despite it's nothing over tabletop  quality it looks just nicey on the battlefield aaand it's one more model crossed off from the list of shame! \o/
Here - with some soviet storm troopers: 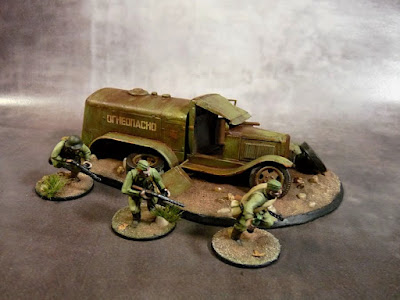 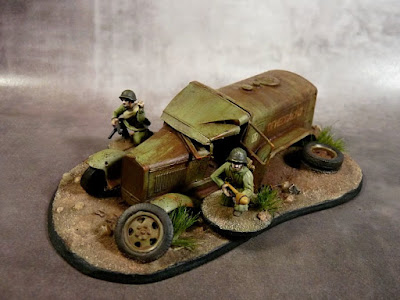 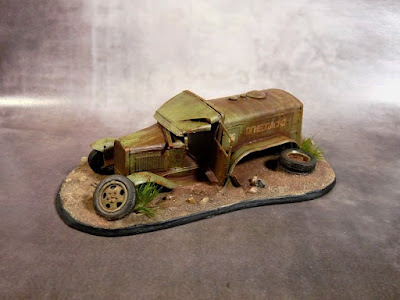 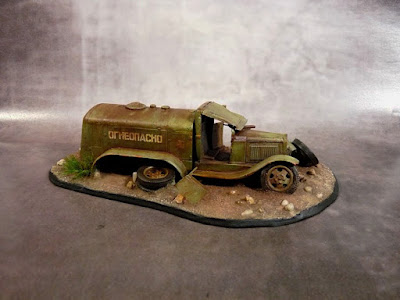 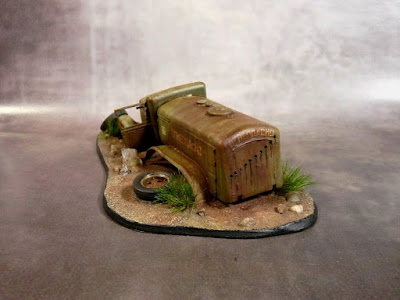 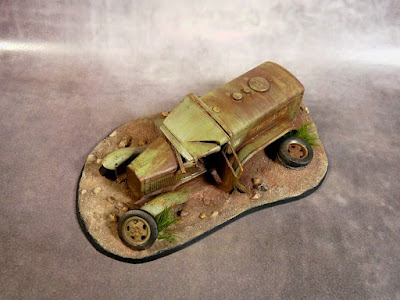 Promise to bring something funny next time... ^^

Heya,
This time it's a real treat for me:
the first print of WWII french tank Renault FT 17 from brand new company: Warpainter.
It was supposed to become the first model in the coming French army for Bolt Action, but after realising such force would be based on ~70 infantrymen, I'm not that extatic anymore...
Anyway I got the tank and decided to have some fun painting it, it's quite unusual model after all (imo equally weirdo to Mark IV monstrocity).
As for the quality I am quite impressed: I've been working on 2 or 3 printed models so far and this one definitely has best quality of details - well done Mr. Second! ;-)
I like the resin used for printing: filing and polishing it is really easy, easier than working on plastic models I guess. Tank comes in 5 parts: main body, turret, 2 tracks and "the tail": all you really need to get it assembled is some sandpaper and few drops of superglue.
For easier transportation I put magnet in the turret so I can take it off for the journey
(or even more probably: to place there smoke marker, after it's wasted...)
So here's the painted model.
Tried to keep it similar to original paintjob and it was actually going really smooth until I put jar of mud on the desk: getting dirty is just so much fun I barely could stop myself from getting it even more weathered...
Camo pattern was painted using masks made of Patafix (Blu Tac). Haven't used it before but I'm quite sure I'll give it another try - most probably to repaint my brother's Hetzer.
Results are quite promising.

Hope you like the piece and new photo background.
Must say I like it bit more than hobby desk mess ^^ 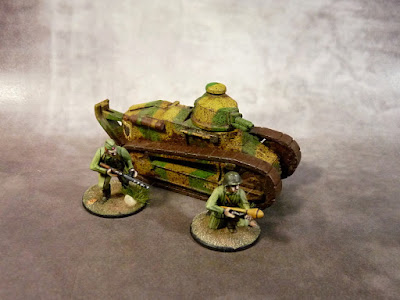 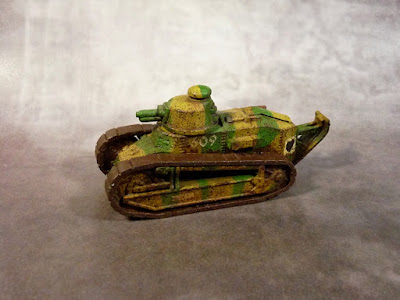 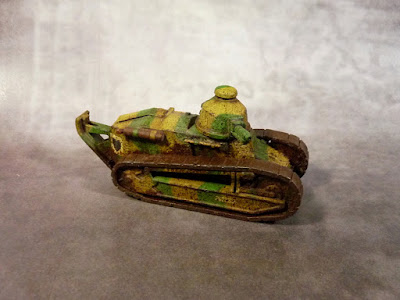 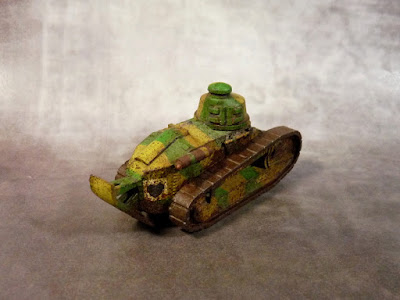 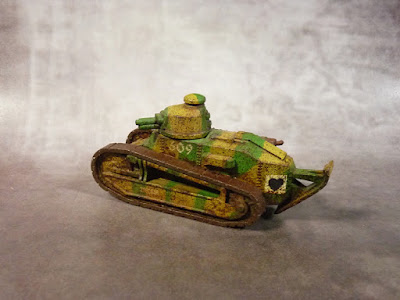 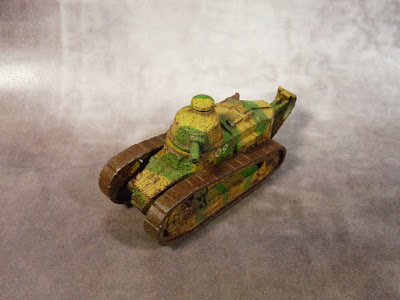 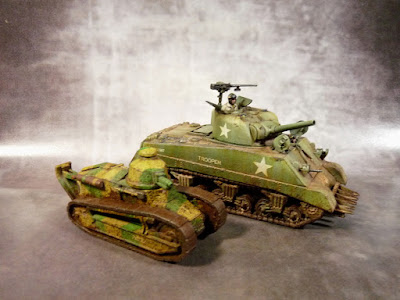 And the source of for color choice: huzzah for Wikipedia! 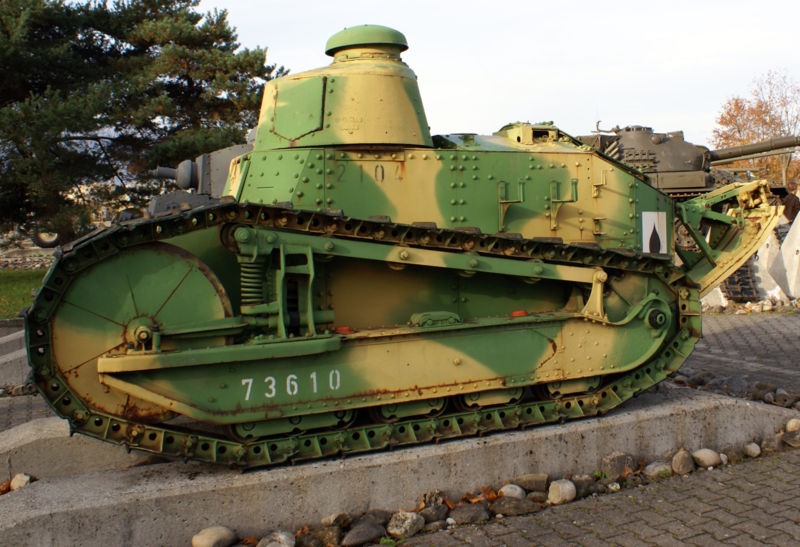