Mr Smoothskin is in da house!

Last week (especially weekend) was busy: really busy.
Sadly it wasn't hobby what was consuming most of the time but life issues. As always...
But it doesn't mean I wasn't able to paint something: a little bit every day and last evening another scavvy bastarrrdo was varnished and placed among the rest of zombieheads" Mr Smoothskin.
Exactly like in case of previous scavvies the pic was taken together with models painted long time ago which will surely be repainted just after I finish models already primed.
Really hope getting painted will improve Smoothskin's combat efficiency: at this stage of campaign the only thing he managed to achieve is 18 exp points (yup - no advance yet), old battle wound and head wound. For most of the games this retard is staggering aimlessly 'cause head would causes stupidity instead of blood frenzy...
Hope you like it but even more hope I won't get bored too soon by painting scavvies only. 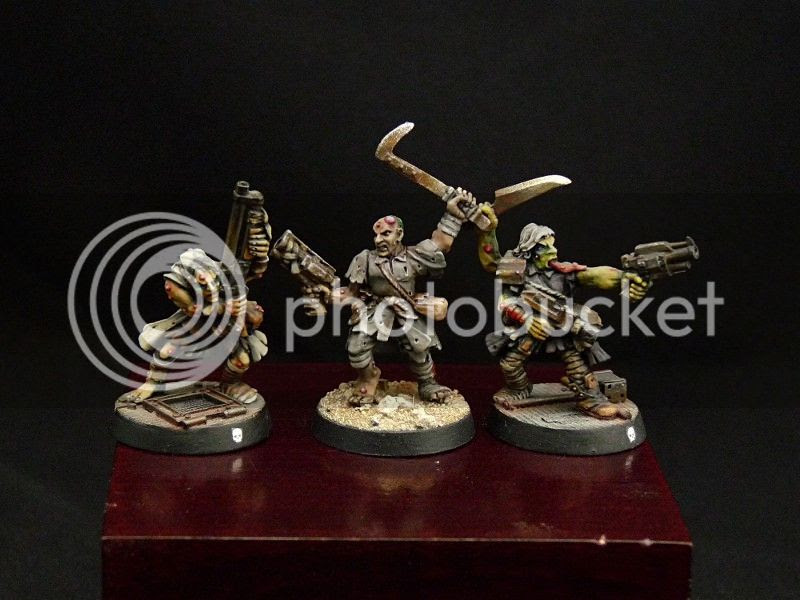 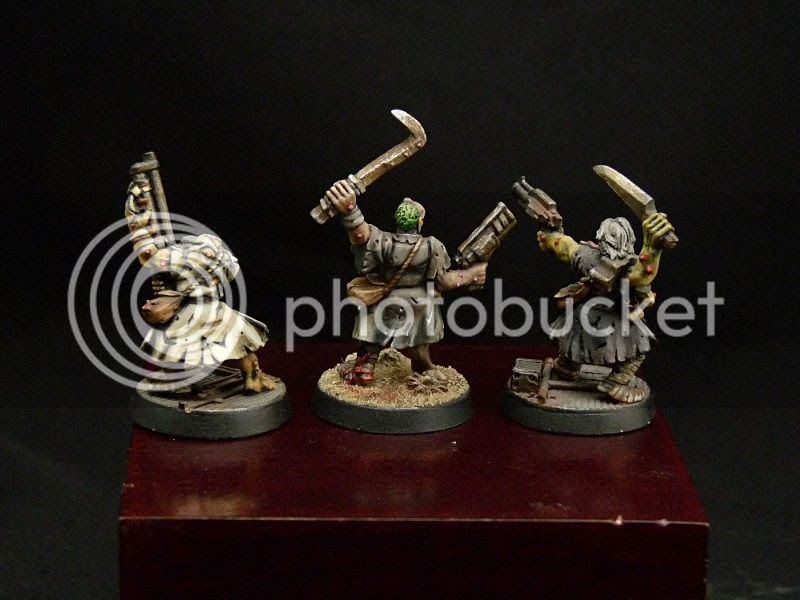 Last week it also turned out I might get the missing scavvy models for my collection: 2 scalies (which I foolishly sold when I wasn't ready to appreciate classic line of these models) and alternative version of the boss: imo armed better than the one I use now. One of Lead Adventure Forum users has them and wants to exchange the toys for some painting services...
I also ofered him some models from the glass case but since they're still available - I'll probably throw them on Ebay or something. If you want any of these - just write me. 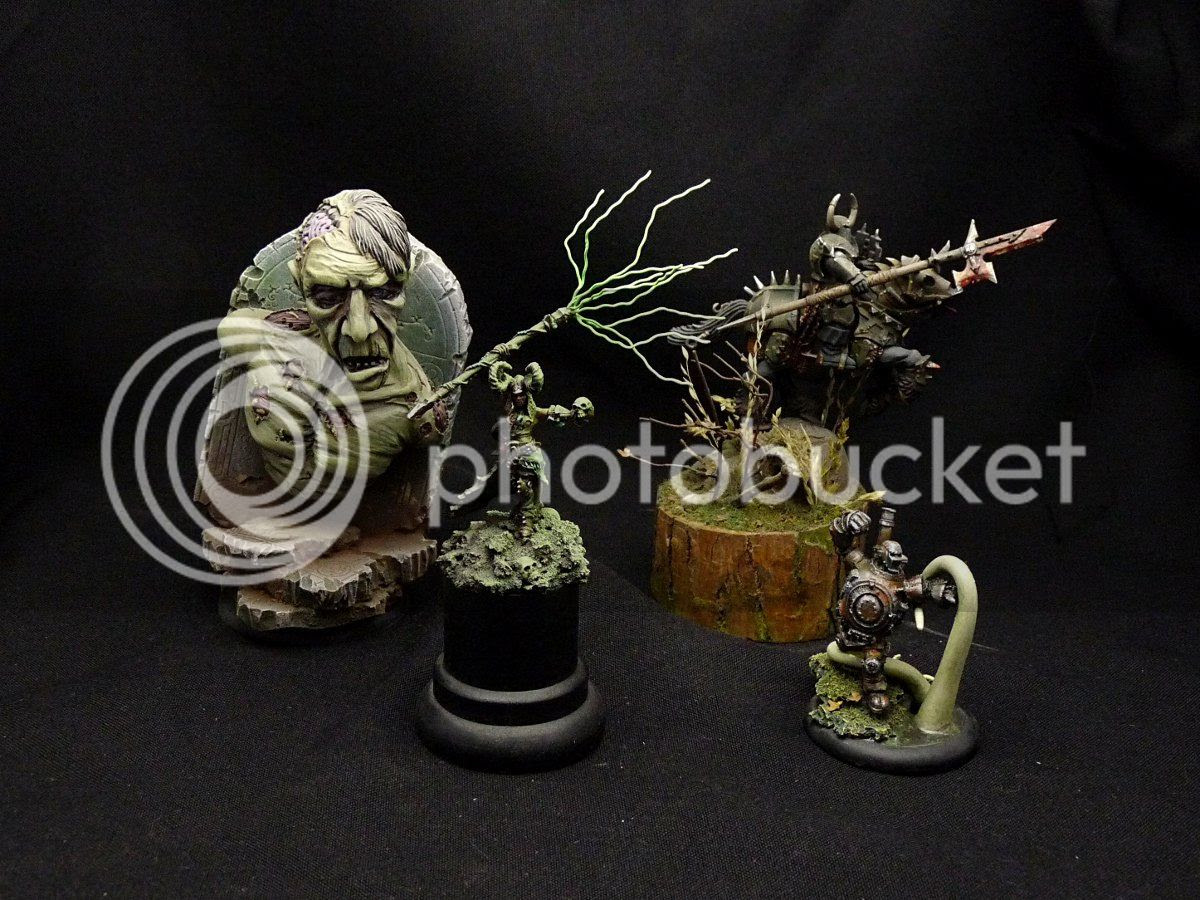 And the last thing: the game.
Friday night Goliaths were trying to ambush my opponent's very experienced Orlocks. Too bad I totally forgot my gang's biggest advance was the look, and not battle experience, advences or equipment...
Therefore it was pretty funny to see juves charging (actually: trying to) Deco's veterans and falling down one by one (we were playing pitch black / ambush scenario). After 3 rounds of that comedy (after my boss fell down and spent rest of the game eating dust) the gang decided to run for the hills. The next time I'll surely plan whole attack better - the scenario is definitelly worthy playing again!
The next game is Orlocks vs Scavies so I guess Deco will try to retake the prisoner before I turn it into gangerburgers for the team ^^
Till the next time!
Posted by demi_morgana at 1:31 AM No comments:

I really cannot believe it: it's still April and I finished another model!
That's right - yet another Scavvy bastard has finally got paintjob and the proper name in the gang: Barlow*
As you can see he's taking his 2 plague zombie girlfriends to have some fun but apart from that after 3 battles he has 41 exp points, has WS4, BS3 and S4 (fucking marvel especially for such cannon fodder like Scavvies) and got infiltration skill. This combined with dum-dum bullets makes him perfect terrorist hehehe... 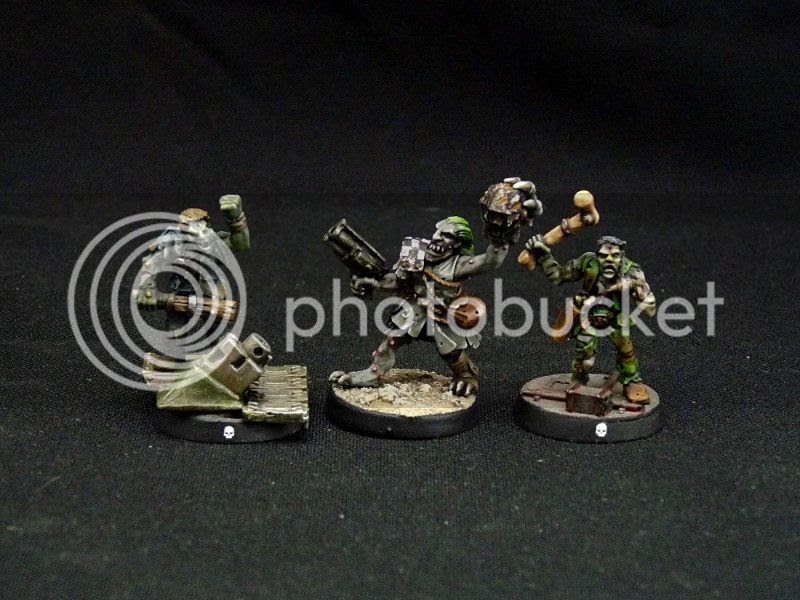 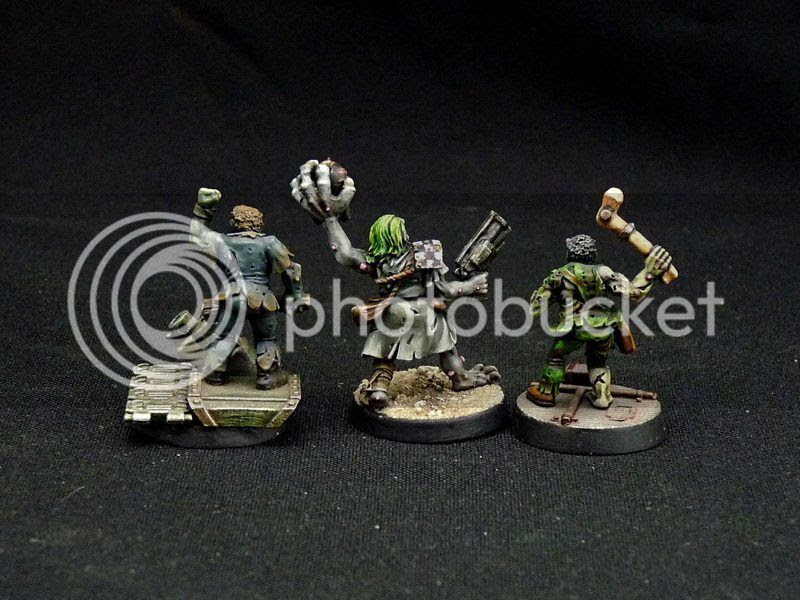 What worries me again is the damn background:
apparently to hide the texture I should either elevate the models using plinth of something similar or bring some character to the photos. I have a plan to use some bits to make simple scenery for taking shots only - of course Necromunda themed.
I saw JRN uses such thing for his masterpieces so why shouldn't I? ^^
Hope to bring the piccies with the next log.

Email ThisBlogThis!Share to TwitterShare to FacebookShare to Pinterest
Labels: Scavvies


It happened, it really happened! Last weekend I painted something!

I had no idea it will be such a joy but I think I am coming back to life after the exam trauma. So as you can easily guess what I finished is the buggy.
Sadly I gave up some ideas I had planned for this piece and just considered the model done, because I think I just spent too much time on a single piece - and moreover: the piece which cannot be used in Necromunda gaming ;)
But all ideas are noted down and one day I might come back to the project and add some stuff to make it more characterful.

I also discovered the reason why wip shots were so fucked up:
I haven't noticed wrong camera setting - portrait instead of macro. Better late then never I suppose. Hope you like the semi-final effect below: 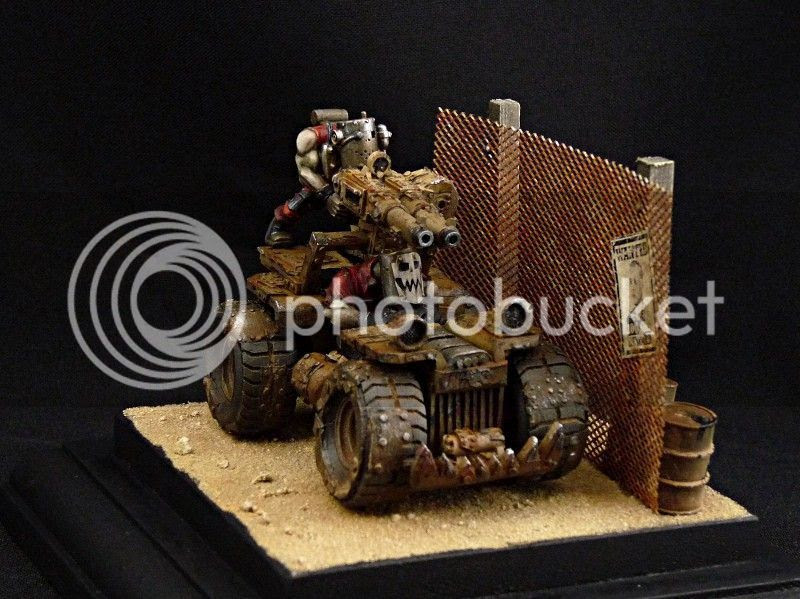 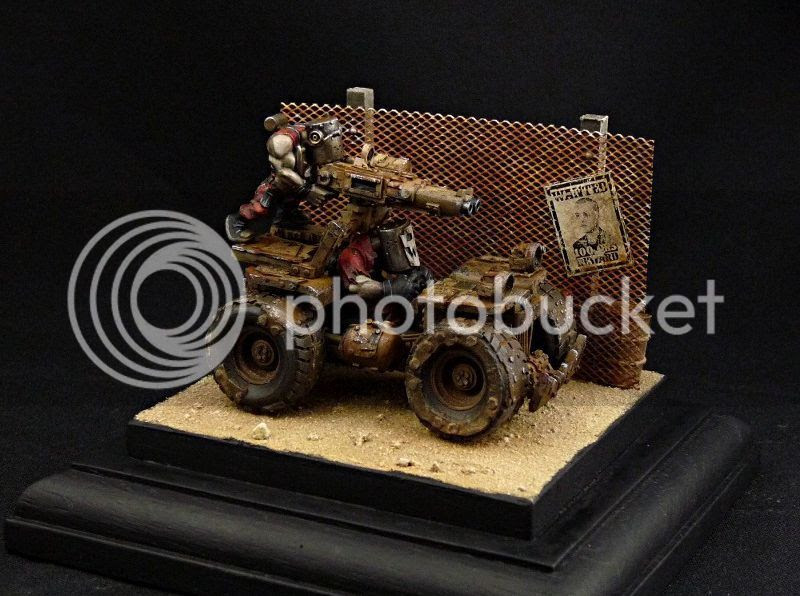 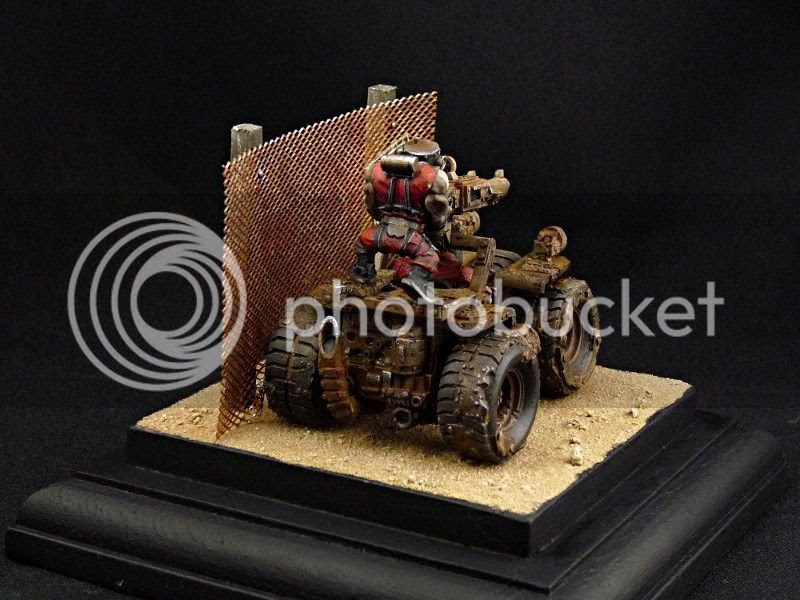 Whate else?
The next day after taking pictures of the buggy I felt power-boosted and started painting another model - one of my scavvies, which turned out to be pretty nasty fucker in one of previous games.
I didn't on too much but after a few hours I realised the model might be finished by the evening and that's what actually happened: about 10PM I was applying the final layer of protective layer (not as matt as the producer claims) and the first scavvy from new wave of painting is here: Cayman (that's the bastard in the middle) 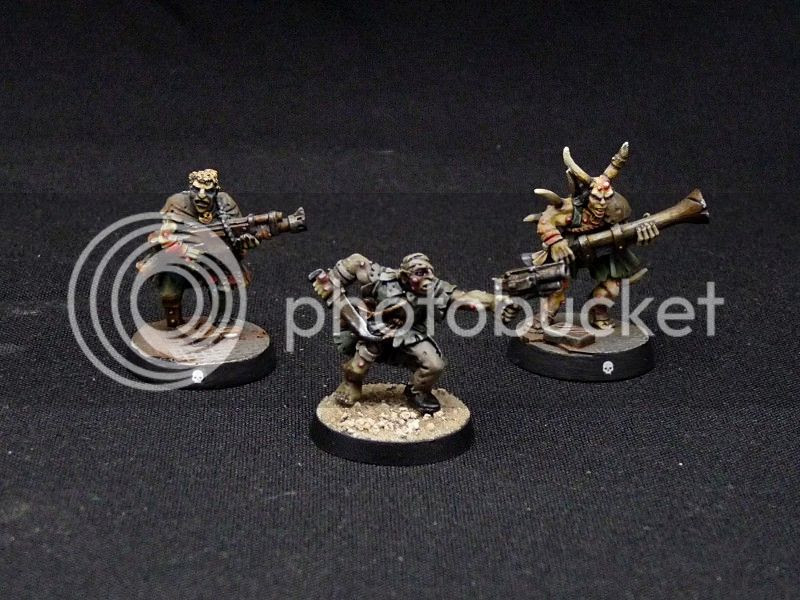 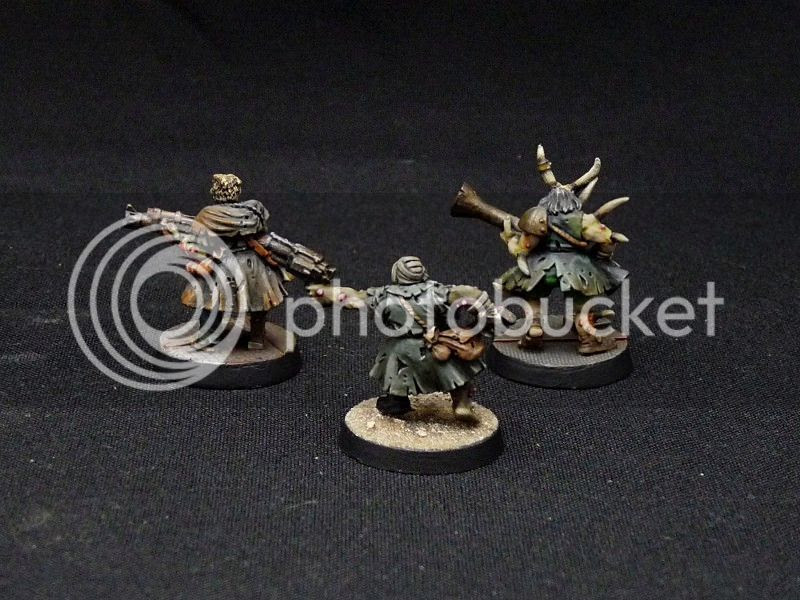 Have no idea why the damn camera didn't want to focus properly on the minature that's why I took group photo. One day when the whole gang of shite eaters is ready I think I will ask mahon for a pro pictures of the whole band.

The next day I was hoping for another painting-boost and prepared another nasty scavvy for some paintjob but apart from pinning the legs and finishing the base all what was done was the base.
After I realised there's no chance for spending a few hours on the model I made set of new tox bomb markers for the boss. Most of games we play last not more that 5 rounds so 3 markers should be just enough to make some opposing gangers glow in the dark hehehe... 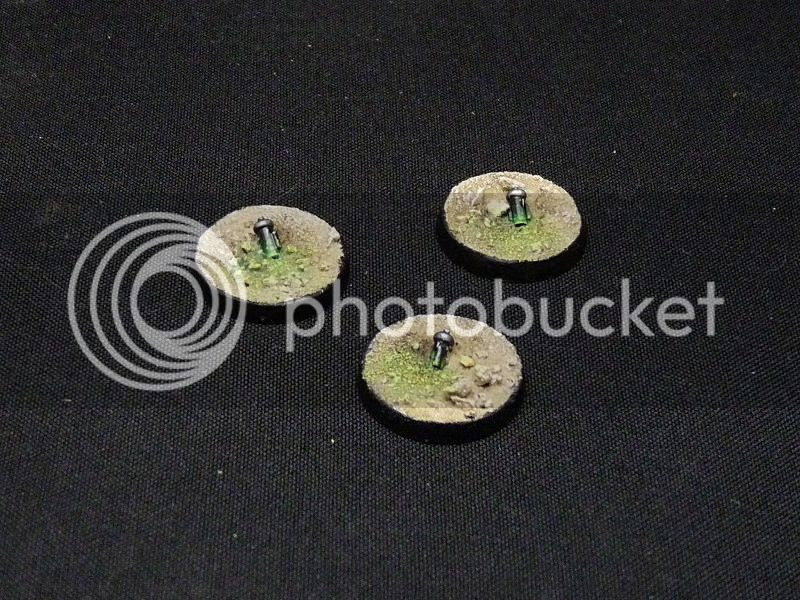 As for our ash wastes campaign:
last Sunday 7th round of the campaign was played: Eschers vs Orlocks were fighting for the loot (Scavengers scenario that is). The game started slow and kinda boring: we were both trying to sneak up to 2 loot counters, grab them and get the hell out of there but suddenly everything changed:
both Deco and I realised we can wipe out a few of enemy models so all in all several gangers started acting pretty stupid and the final result was bullet in head of one of my lasgunners. Eventually my opponent grabbed loot counter and run away so in the theory the victory was mine but loosing an experienced ganger always hurts.
Good news is I managed to save enough credits to replace lasgun of one of my heavies with something much more proper and... hot...

And last but not least - clickable piccies has been finally added thank to Hellspawn's big help - cheers dude! I knew slackroom could be used for something useful! =P

That's it for now!
Posted by demi_morgana at 2:04 AM No comments:


Another piece of spam and still nothing fully painted...
I definitely overestimated amount of free time I can get for minis while writing the previous log. Anyway works on the buggy are slowly pushed forward (almost) every day so finishing it is just the matter of time.
One thing I realised for sure: painting the vehicle and making the base was just fun - really enjoyed that phase. Sadly cannot say that about slapping paint over the crew.
I don't think it's the matter of sculpts but... Well... Don't really what it is:
I never had anything against orks (nor orks) so I suppose it might be color of the uniforms, amount of time I already spent on the thing combined with desire to paint sth from Necromunda range or the moon phase.
Here's the current stage of the project. I hope to add some old snotlings to make the think more oldschool and to break the whole sand monotony.
I also have to work on taking pictures: just after I downloaded these shots from the camera I compared them with the model. Model is brighter and to achieve similar effect I am forced to add some GIMP magic. I suppose the black background might be to blame but really cannot be sure. Earlier stage: 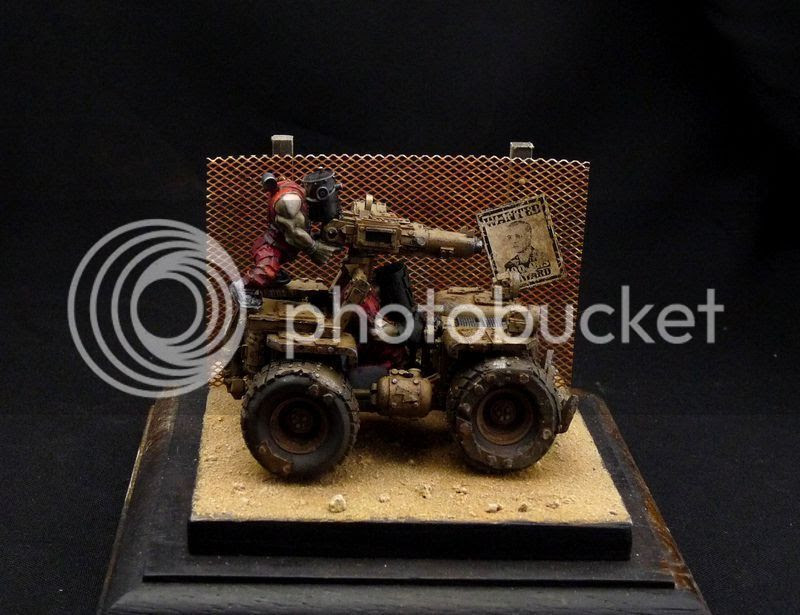 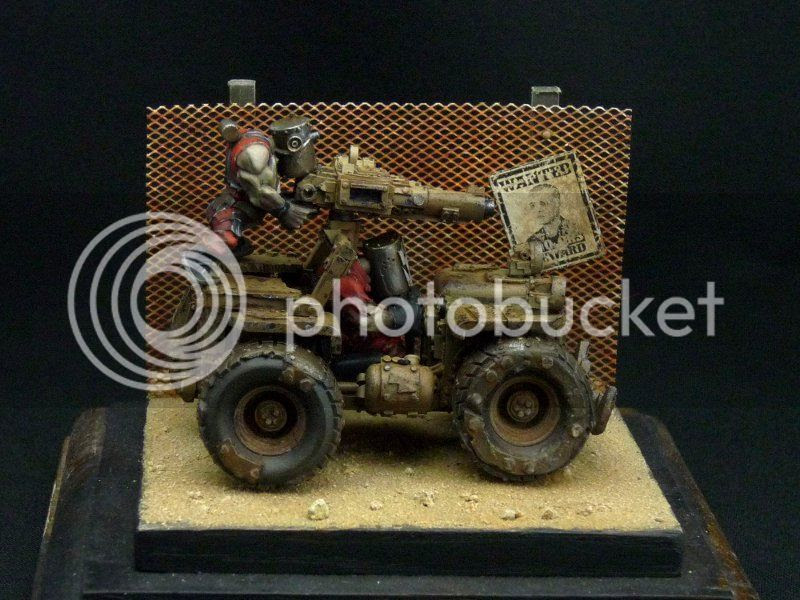 What else?
The table. Or maybe I should say: THE TABLE.
It's really big (6x 24"x24") and I managed to put together all modules on the small table we use as the base. We had an idea to play a game on this monstrocity but to do that I'll have to rearrange (and probably get rid of some) stuff kept in the gaming bunker so we can move around the battlefield!
Also to make the table battle report - worthy it'll be good idea to finally finish it which also means painitng.
Until now I haven't painted anything such big and cannot afford fucking this job here - raising the project already costed too much time and effort. So the decision was made to start small research before I get any paint and apply it on the board. If you have any ideas or would like to share any experiences you have just throw a comment here or join proper threads on Chest of Colors or Frothers. Any constructive opinion will be appreciated! You will also find there bigger shots of the battlefield. 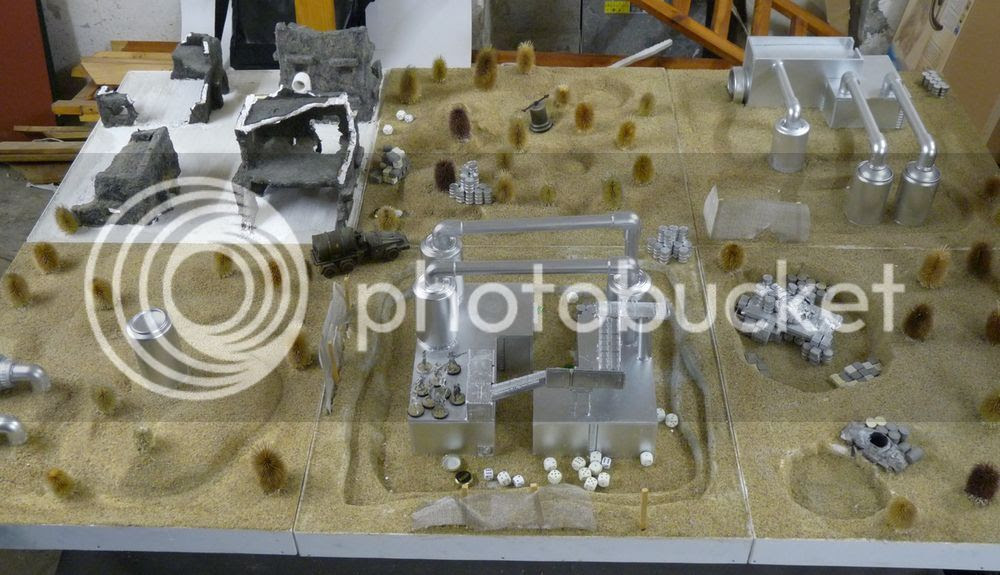 And speaking of the table - last Monday new module has been field-tested:
gang of Orlocks was trying to defend a water plant against horde of Scavvies. Thank to Deco's dice rollin' - badluck and great portion of training I applied on my Scavvies I managed to force him to leave the battlefield with one green juve dead and another captured.
And that means unless Deco can force his troopers to act veeery quiet my rotten-heads will be having Orlockburgers next weekend hehehe... ^^
Posted by demi_morgana at 10:44 PM No comments: