"In ages past gigantic birds of prey lived amongst the peaks of the World Edge Mountains..."
Another 2 models left (actually: flew down) the painting desk: pair of undead birds of prey - carrions. Army of the Undead has grown by 90 points and another unit has been finished!
I remember I got the these models yet during high school times but shortly later Vampire Counts were released so carrions were forced to retire... 😒
Back days whole unit ended up in the pile of shame: I didn't like paintjob and couldn't use them in Vampire Counts army. But years later, when the Middlehammer Undead Army was born, models were washed and I looked at them from the other angle. There were just cool.
Few years back 2 carrions were painted and now remaining pair joined their undead siblings. Despite models are bit goofy I like them a lot and I'm very glad they finally got paintjob. These sculpts bring back lots of memories. I am quite sure whole that Undead Army thing will drag out even more nostalgia. Funny feeling actually. This thinking about past is like I am summarizing my life. Preparing for something. Can't get it out of my head.
I also like the bases are a bit scenic - all those little details make model alive (or rather: living dead...😋 ) and therefore more interesting. Skeleton remains come from 2 or 3 skellies which ended up as parts donors during my years in hobby. Breast plate and left arm come from old plastics, which were bit smaller then multipart skeleton regiment. I'm really glad these two were taken out of pile of shame. Some more deaders next time 💀
So here they are - whole dead birds flock worth 180 points: 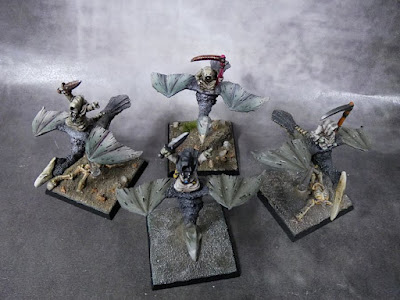 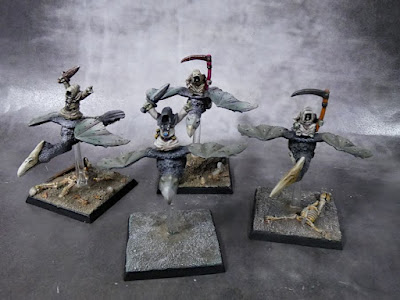 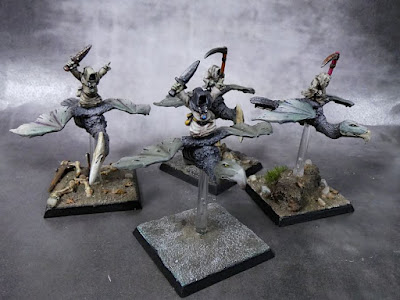 And the ones just painted: 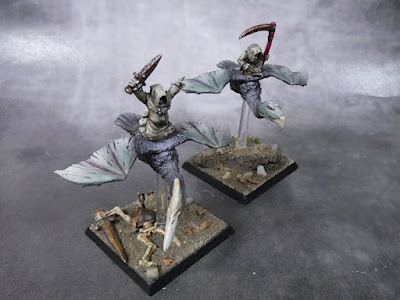 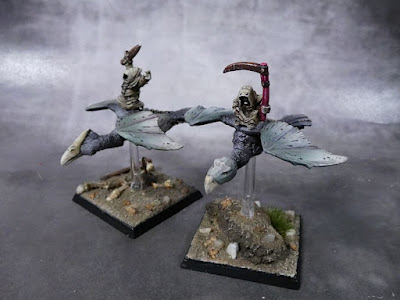 Hey again.
Right this moment some re-animated war machines are being painted for 2500 pts Undead Army project, so it's just quick "technical" announcement. While preparing some spare room for coming skeleton chariots and catapults I found this fella hiding in the glass case.

It's been brought to existence almost 8 years ago and since that time it's been pretty useless. In fact I'd like to wash it off and use hipogriff as vampire lord's mount, but on the other side that would be waste of solid (I think 😊) paintwork. The model is mount of Bretonnian king but for rider I picked Empire "arabian" character - no idea who it is, I got it because he looked just cool. Whoever he really is - it's just solid material for army leader or at least mighty hero.
So here's the idea. I can sure wash it off or try to sell but I don't like wasting decent paintwork and don't have to paint stuff for living anymore. But if any of you have spare old monster from middlehammer era (Griffon? Or zombie dragon maybe?) and would like exchange it for my painted piece let me know - maybe something can be arranged 😎 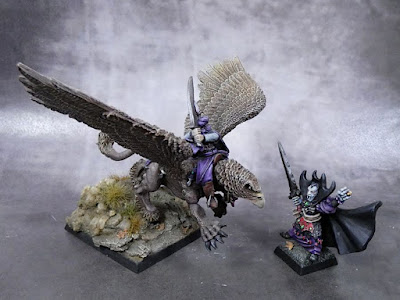 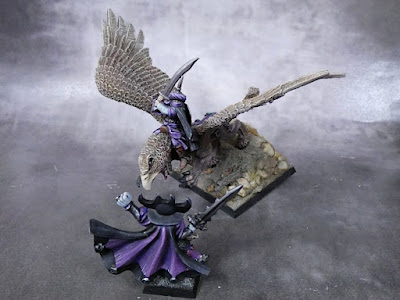 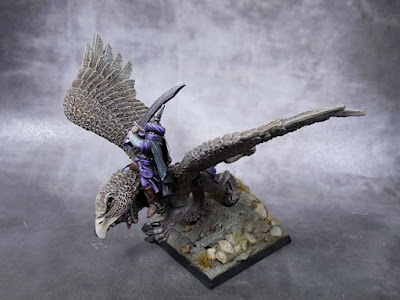 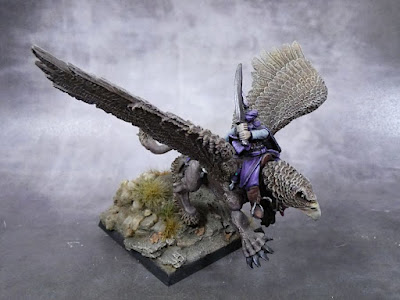 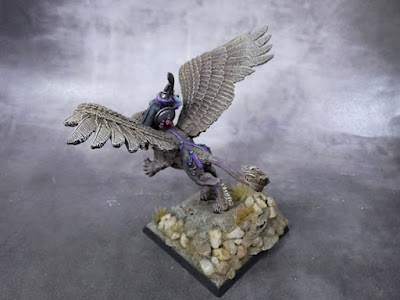 Just realized this year I've painted enough classic Warzone junk so I can move to painting other kind of old junk. While digging in the pile of shame I grabbed bag of WFB skeletons and decision was made to add little something to the 5th edition (-ish) Undead Army.

The army has already got some reanimated chariots, and now another machine arrived.
Must admit this kinda bought me back. When I was still into Warhammer Fantasy I never managed to field that one. Models were hard to get here, not mentioning it was expensive hobby (not that it isn't now...🙄). In fact I knew it mostly from Dark Omen game.

I got pair of these few years back and frankly had no idea for painting it more interesting then just bare bones (like this one) so they ended up in the pile of shame 😞 But recently I spotted undead catapult model standing on large base and thought this might be the key: bone-made machine based on dark ground and partly replaced crewmen should do the trick.
I like the final result - it's the first time I painted skellies with airbrush. Until now I was kinda sure it's pointless because there's not much to be sprayed on skeleton models. But looking at the catapult I think painting some rank and file this was should be good fun. Especially that I need "tar pit" unit for the army where vampire lord of liche can hide in the heat of battle.
Just thought back days I was convinced the screaming skull catapult was crappy weapon: causes just minor damage compared to standard cataput and unit hit must take morale check - who cares 🙄 That only proves I wasn't best player around: morale check after each hit! Supported by magic items like Staff of flaming death and spells causing more less the same and terror causing creatures staggering around means at least 2 rounds of testing morale before any real combat starts!
Passing morale test based on Ld 10 is not a problem but try to pass it 8 times in a row 😈
Yeah... I'd really love to see this army in combat once again... 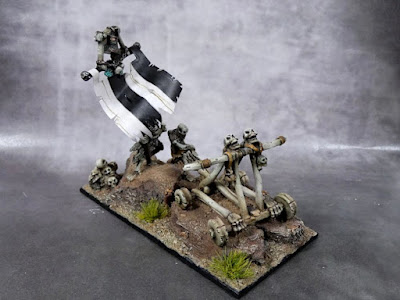 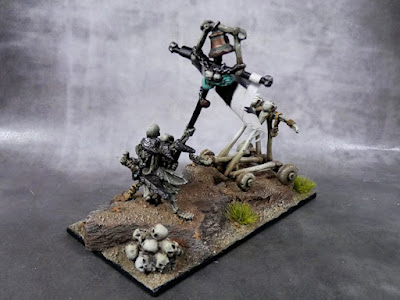 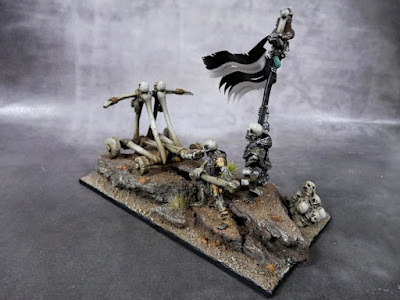 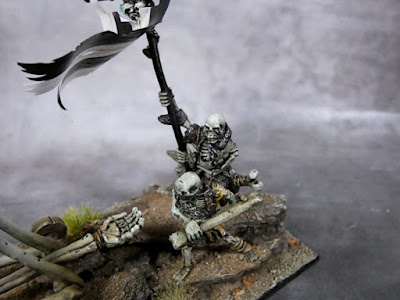 And artittery section at current stage. I am quite sure catapult painted earlier will be washed off, repainted and placed on large base: 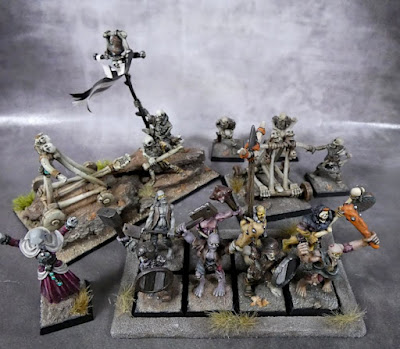