But first something more interesting: painted stuff!
For starters - my response for Rob Hawkins converted skeleton archers.
This guy definitely saved the model from being forgotten forever in small box in the darkest corner of my cellar, together with some more old and mutilated hobby junk.

Although paintjob is nothing special I am pretty satisfied of the conversion - it was fun and easy. I should check are there any other old undead in the lead pile, maybe it's high time for me to get Mordheim gang? Or I could try to assemble mixed regiment of skellies and zombies - blocks of troopers always look effective, especially dead ones... 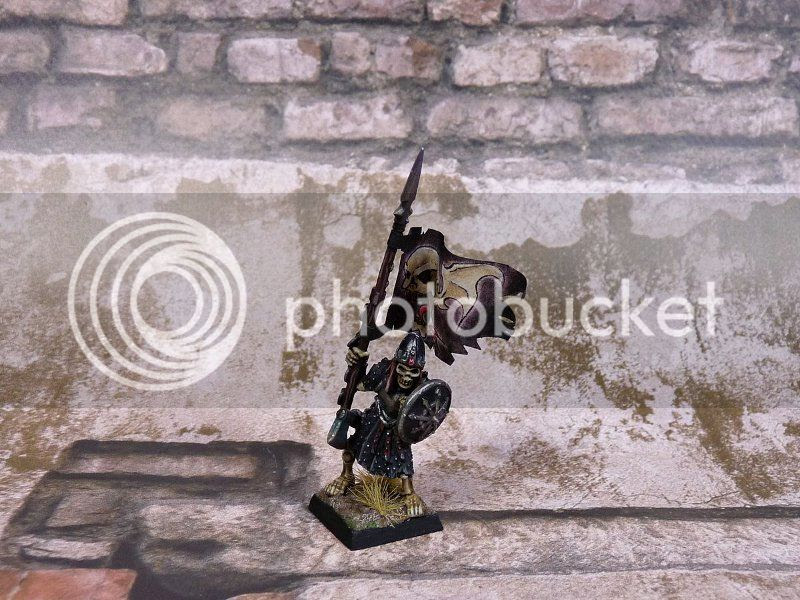 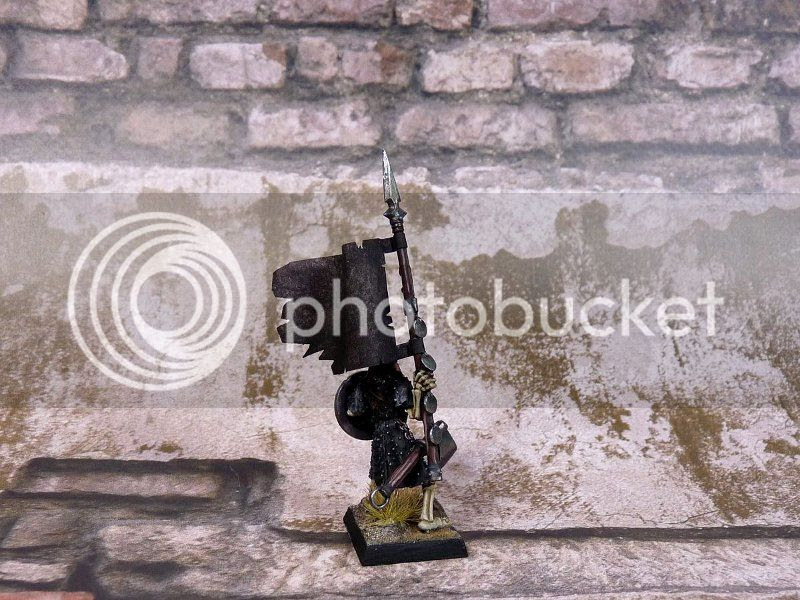 Another one is the second classic plague marine model.
I said it before - those old sculpts are just great, full cooperation with painter!
Bunch of servants of Rotten God will sure look great on the battlefield especially supported by minor demons, spawn of beast of Nurgle. Or all of them!

As for the marine it was painted using more less the same color palette as for the previous one (earlier post) but I tried to achieve stronger contrast. Still not exactly what I wanted so there's another one (the cult leader - mr Fabius B.) to improve. Hopefully. 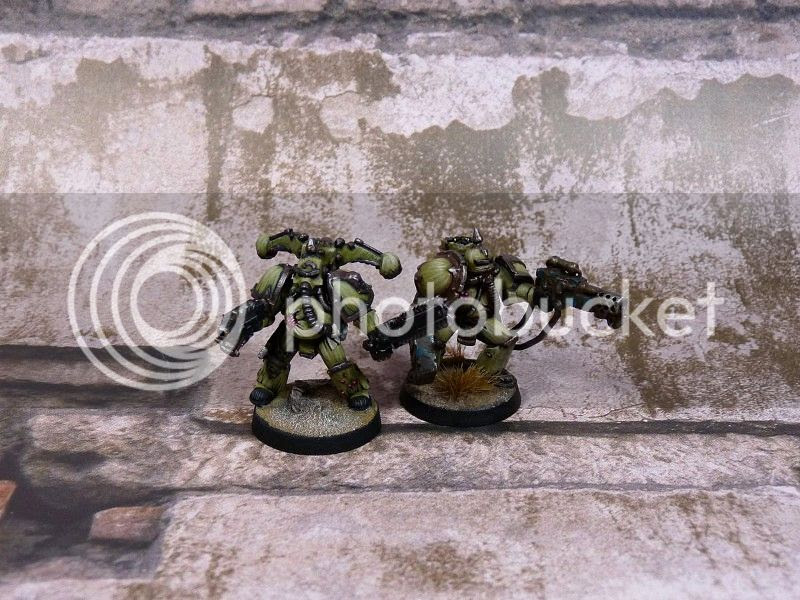 And the boring part - annual summary.
The chart says most of it - this year I painted 43 models - more than in the year before but on the other hand we played few less games - 17 only.
I want more - both gaming and painting but I also know real life can fuck just everything, especially such a fragile and precious matter as the miniatures hobby.
On the other hand I should be happy I can constantly play with toy soliders: I know some poor souls which cannot get even close my score.
Poor unfulfilled hobby souls - here's the candle for you: 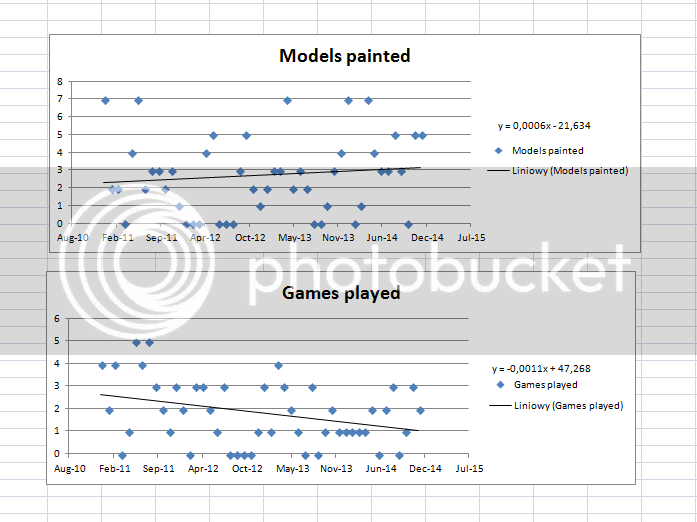 The reasons remain the same: my family life, some more work to do, my opponent's studies and of course - he got married so now he has to negotiate leaving the nest for quick game every time with his second half. Congrats again, bitch... ;-)

This time I tried to avoid setting some big, long distance goals to achieve to avoid disappointment in the end but if turned out I finally managed to paint all models from the Scavvy family. Sure, some of them were finished few years back but they will be getting fresh paintjob eventually. Probably after acting well on the battlefield. The first candidate is definitely Deadeye - the only scavvy with autogun:
2 games back he managed to deal with 3 pit slaves using only gun's butt and teeth!!! 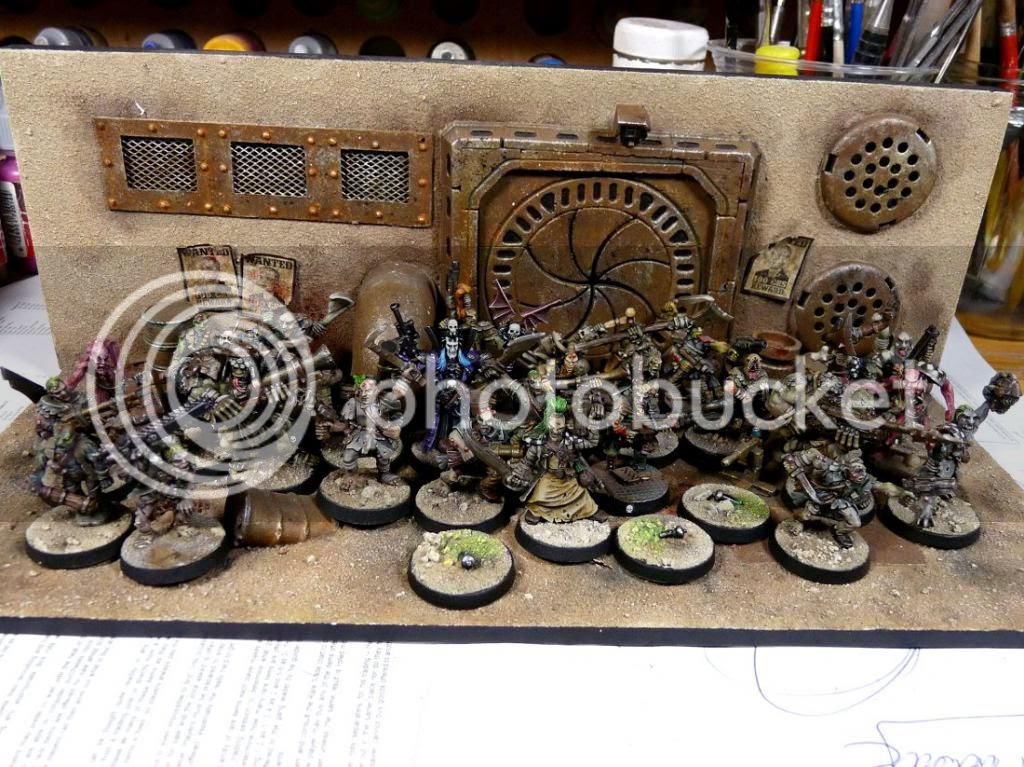 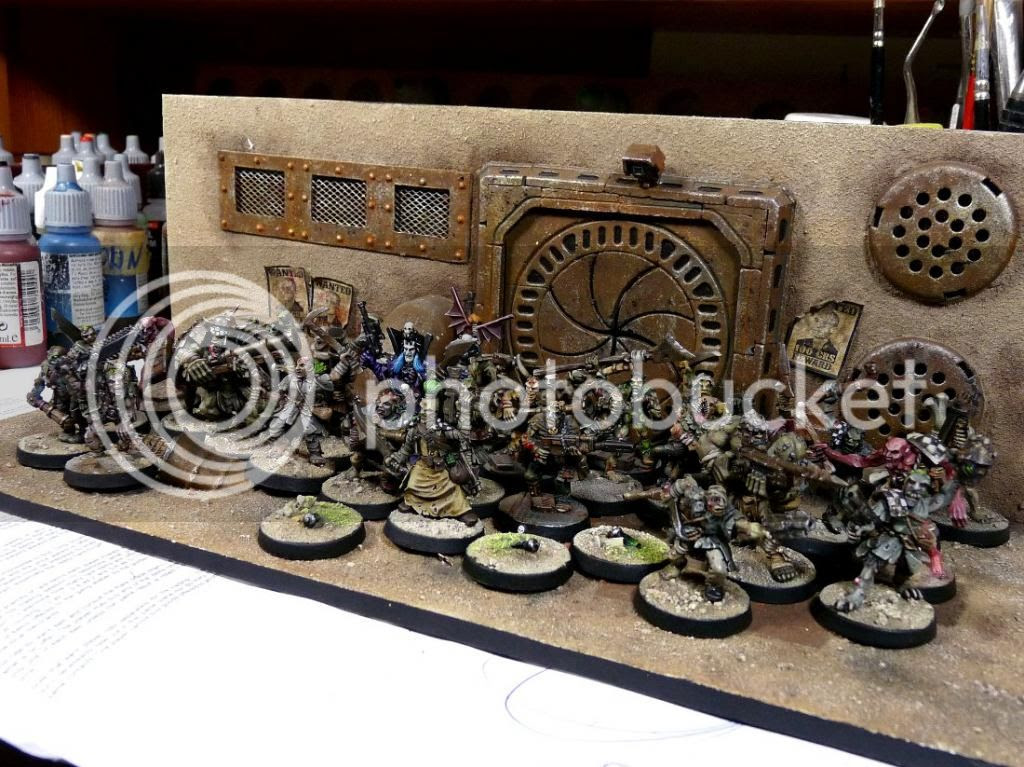 Which reminds me - we managed to find 2 gamer - candidates recently. They seem to be optimistic about whole gaming idea so there's tiny little chance to play BIG match in the coming year. That's what 72" x 72" game table was built for! Fingers crossed for that.

As for any hobby plans for the comig year - not much really.
I hope to finish some models staggering on the desk, build another photo background (the "vault entrance" is cool but I want some change), play more regulary and maybe start another gang - Ratskin Renegades or Redemptionists.

That's quite unexpected for me but it turns out I managed put some more models on The Painted Side! Looks like coming annual summary chart won't look as crappy as I was thinking.

So what's this time?
First: pit slave model. My opponent runs the gang based on cephalyx slaves models so I got some spare parts, built another ganger, did some paint slapping and another guy is ready to join the ranks of Underhive gladiators.
These fuckers are just pain in the ass to confront in close combat, huge pain in rottin' scavvy ass! Especially when you realize a single successful hit with shears can instantly kill your beloved models, no roll for serious injury!!! ><

Painting this one was nice change after zombies and chaos stuff. It took me about 2 late evenings but I like the result. My opponent should too - especially it's the only painted model in his war party...
As for conversion the only modification here was head swap and adding axe. I know pit slaves can apply same amount of damage with bare fists but I decided the gang begs for bit of variety: cannot stand 10 unpainted models looking more less the same charging scavvy - lines. Shooting them is just like doing them a favour.

These PP guys are slightly bigger than original Necromunda minis which I found a problem first (pic below - guy compared to swarming plague zombies). But when I saw how easily they can run through flesh and bones with buzz saws, drills, shears and everything else then managed to get in Obi I found the idea of overgrown, steroid - driven gladiators quite acceptacle. 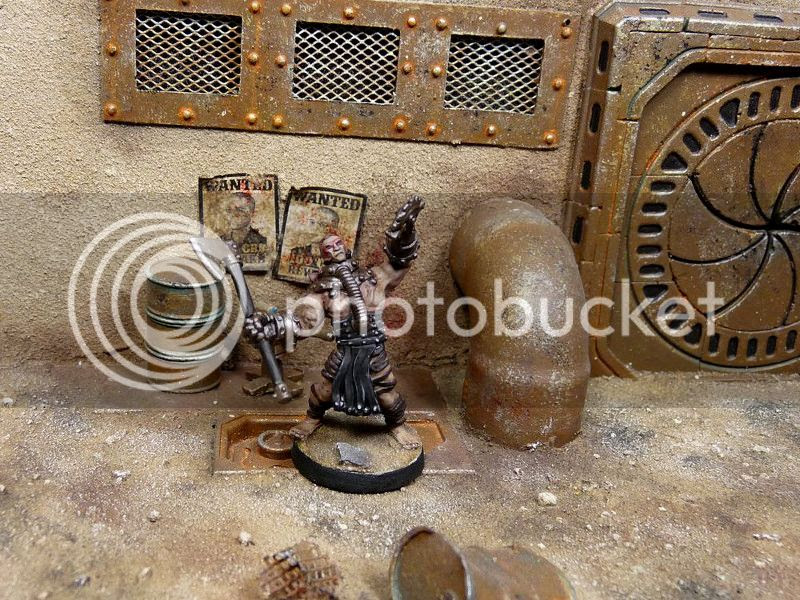 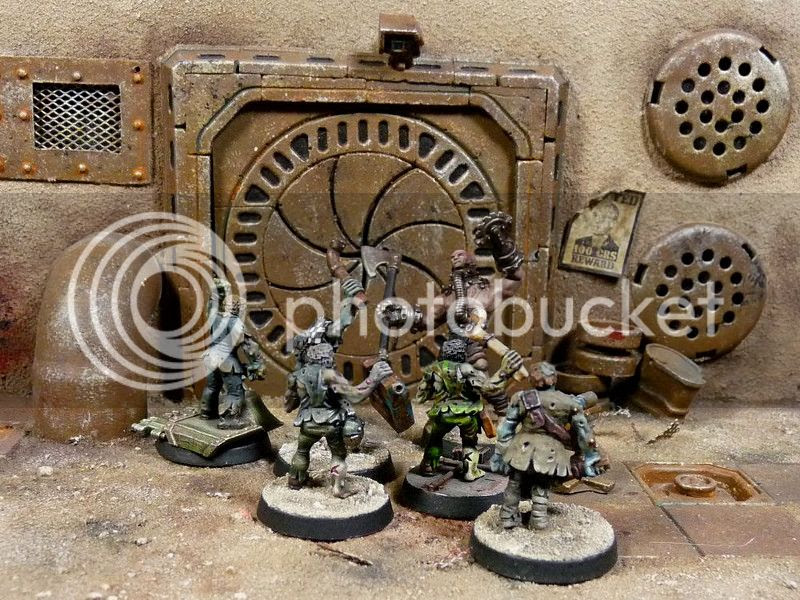 Which reminds me - last weekend Aarseth* managed to lead successful rescue mission so the captured scaly came back to the team. Such a loss would be very severe: that fella got nice a advance skill but also costed quite a lot of credits and as we all know - scavvies usually are just beggars.

There is something more painted, something I wanted to see done for a long time and something I am quite proud of: classic plague marine.
When I got the miniature there was a plan to build small chaos warband, more 40k than Necomunda but still something skirmish-like. I got some parts, did some conversions but all in all all parts were sealed in the box and put away for a long time.

No idea why really...
Last week the seal was broken, model was cleaned and about 3 evenings later was placed in the display case among Heresy blights. Me happy.
It the first true plague marine I painted evah, sure - I painted some placcy marines back days but let's be frank about it: only metal counts. As you can see the model was slightly converted so it fits Necromunda better. I really like the idea of Plague Cleansers: corrupted outcasts / cultists supported by some daemons. This should be very powerful NPC group to encounter during the campaign.

Color scheme is nothing original - initially I wanted to paint it with more striking tones (like bone white armour, blackish or striking orange corroded metal parts) but all in all classic color choice won the casting. The next one will be painted probably similar way, I might increase the contrast and test some oxidation though.
I tried to paint some texture on flat areas of the armour but since the pics are bit overburnt it's barely seen now. Lesson learnt: more contrast on this part next time. 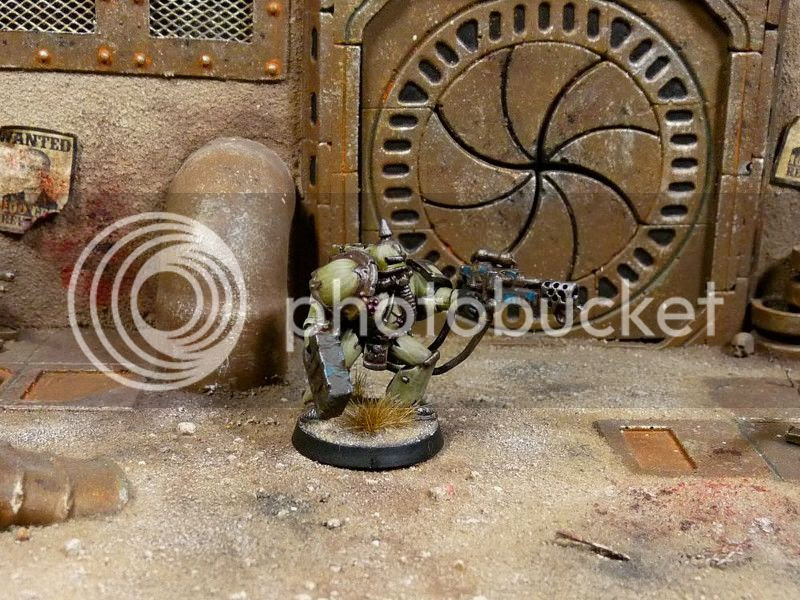 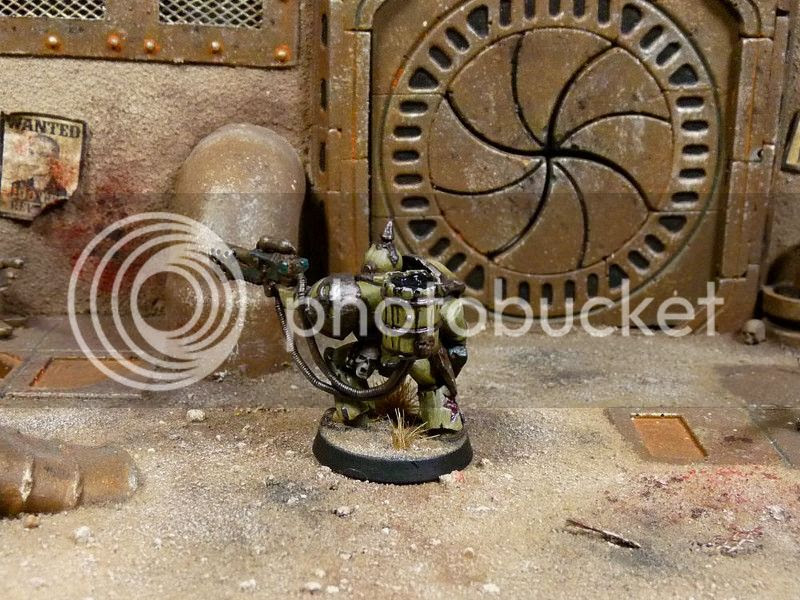 You saw the nice pics so now something extra:
my painting desk with some canidates for getting painted - hope to see 2 more finished this month.
On the left - lovely mutie raider from Gorkamorka. I really regret I never had a chance to play the game of get some more models (which reminds me - let me know if you have some spare / unused GM stuff). These fellas fit our ash-wastes-munda perfectly so I hope to add NPC characters to make campaign even more deadly and enjoyable.

2 guys on the right are plague marine buddies of the painted one: another original oop model (once again - if you have some unused oldie plague marines, you know what to do) and converted one. Don't remember the idea standing behind the conversion but it's based on ork body, terminator gear and some junk. I like it much less that back days so lets hope the paintjob can save it. 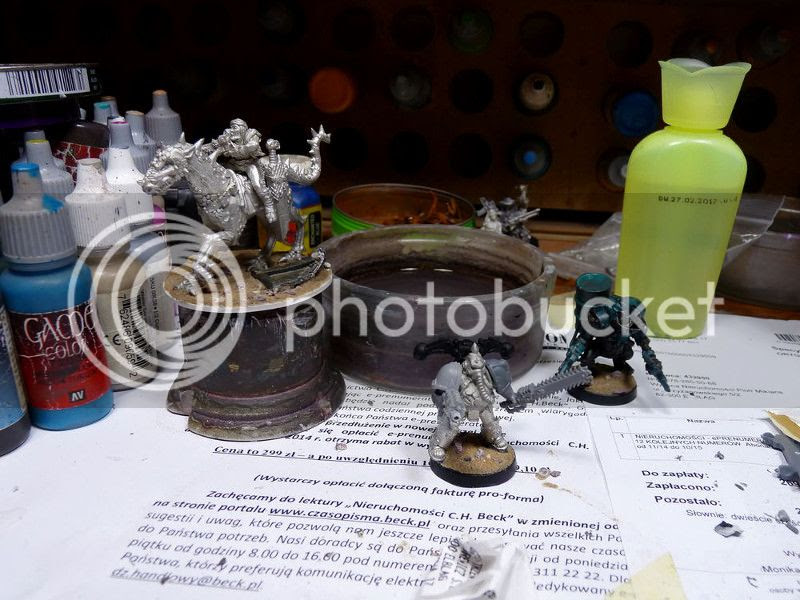 The last piece for today: skeleton standard bearer.
I wouldn't think about bringing the piece on the desk without Rob Hawkins bloggy. The guy did just excellent job on converting bowmen using old metal models so after I read it I realised there was one heavily mutilated skeleton model in the junk box so the decision was made to make it get up from the hobby grave.
There were no arms and legs so I added placcy legs from skeleton box, old metal arm from skeleton standard bearer (yes kids, in the old days there metal bits added for command group in box of placcy soliders). Remaining parts are: chain, oldie spear and chaos marauder weapons. You can even see wip stage of banner on the right.

I don't think painting this deader will take much time or effort but it should be fun - Undead was my first true Warhammer Fantasy army. I would like to see unit of skellies in the display case one day - too bad I have no gaming use for them. 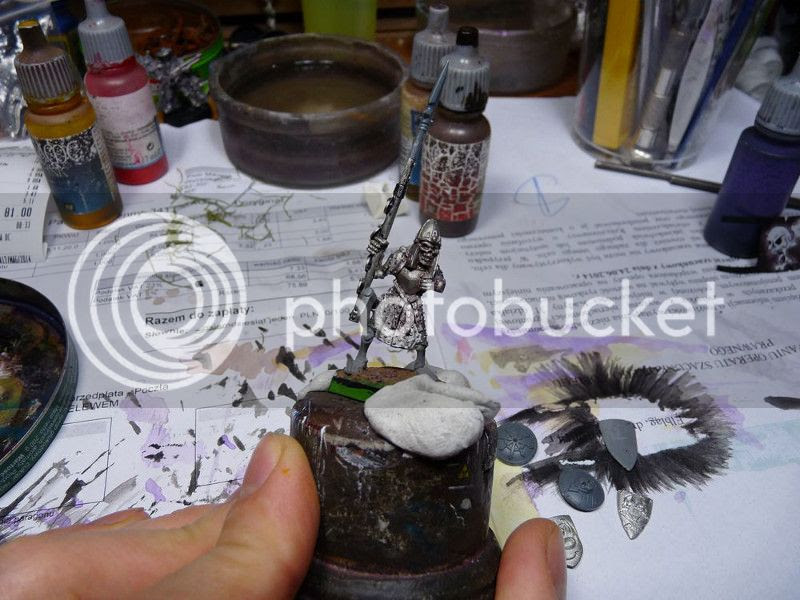 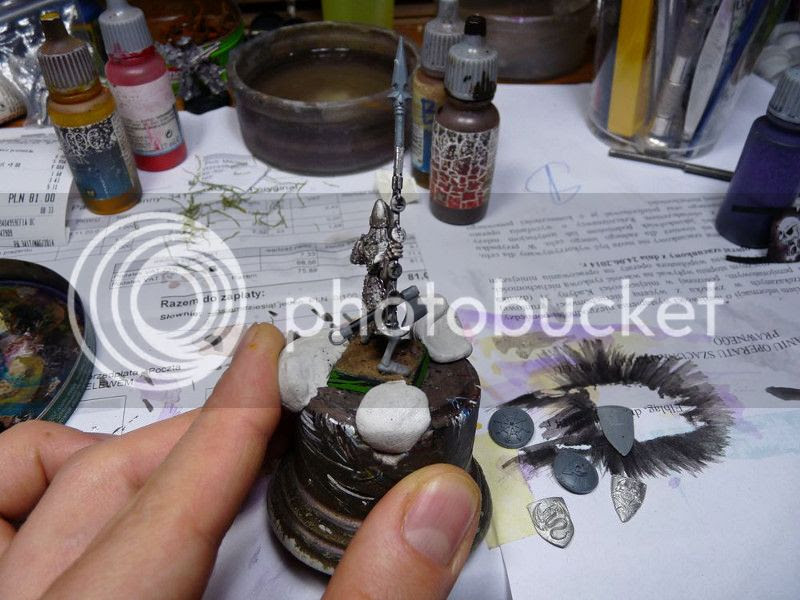 That's it for now, take care and try to not to step on tox bomb jar!

Karloth Valois has came back!

"The Redemptionists searched the Abyss for weeks looking for any evidence of Karloth's remains but found nothing. But, as every Underhiver knows, nothing can be found in the Abyss which does not wish to be found..."

That's right:  the anti - pope of the Underhive has emerged from the Abyss where he was thrown by those which - burning bastards so the time of revenge is close!
He is mean, bad and ugly which will make the vengeance even more devastating!

Especially because monsieur Valois is not very happy about paintjob recieved (fastidious bitch... ><). But he's at least a bit right - I am also not sure I like the final effect. It's the second or third attempt to paint the piece but it stays as it is.
The idea was to give him nice and fancy ritual robe so every Scavvy knows who's the big boss but I've always had problems with painting decent purple. Maybe adding stronger red hue would be good idea?
Too bad - wanted to use purple theme for my Redemptionists but I think I'll stick to bone white as the main color. At least it will contrast nicely with guns and other shit those holy drugs driven maniacs bring for the crusade. I can smell flesh burning...

Anything more to write about the model?
Not much apart from the fact I am very happy another Scavvy left gloomy dimension ov ye unpainted pile. Although the final effect is far from my expectations working on this beautiful sculpt was just a pleasure. I didn't have better idea for creating bigger contrast that's why the staff was painted the way you can see. Distracts attention from flat purple.

This cocker was painted just before Karloth Valois and it was the last spare plague zombie I had. Since I cannot field more than 6 zombies all doubled models were used in other projects (like Zombie Dragon base or this standard bearer painted for Vikotnik).

As for this one - after the last game during which my Scavvies were torn to pieces* by pit slaves gang and their fucking buzz blades and shears I decided I need a melee monster to respond to the slaves where it hurts the most!
Yeah... I bet fresh scavvy wielding close combat weapons can make the difference...

The conversion was quick and easy, which is something I like the most: the bone was replaced with chainsword, backpack was added and as a bonus: crux something from terminators sprue put on the chest. I regret I didn't replace the head but I thought about this just after sword was added - there was not much space to perform operation without risk of damaging the sword.

This guy might be cool to use in the field: it could storm enemy ranks together with plague zombies flock supporting them with:
1. superior weapon skill
2. superior weapon
3. grenade!
So without further introduction... Here's monsieur Karloth Valois and his trusty berserk - servant: Barracuda**: 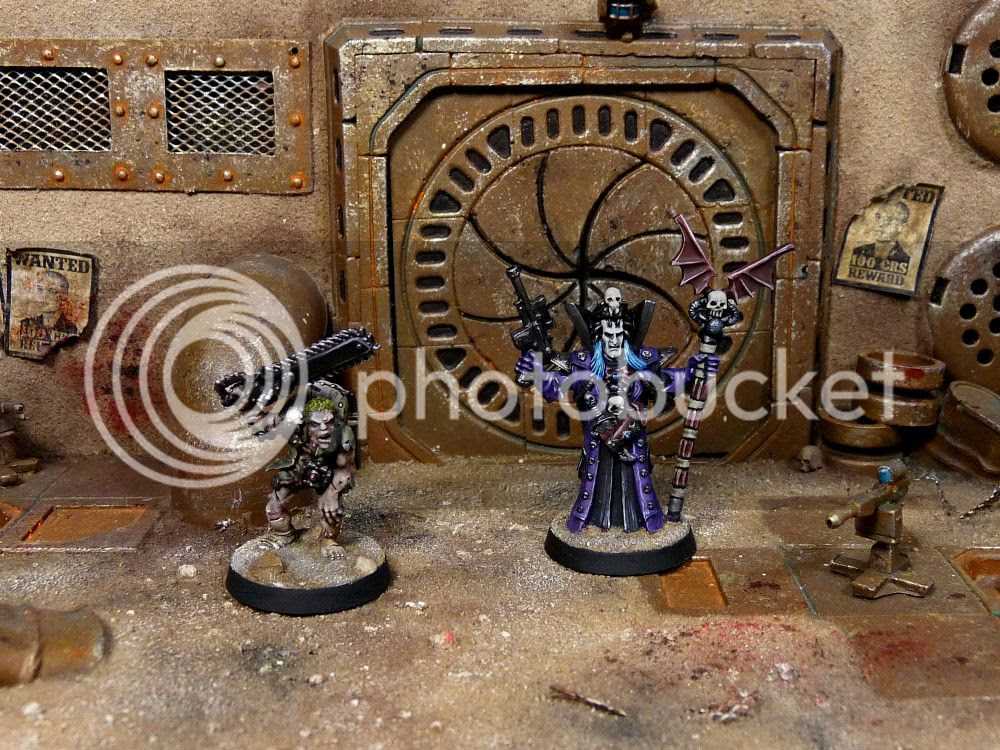 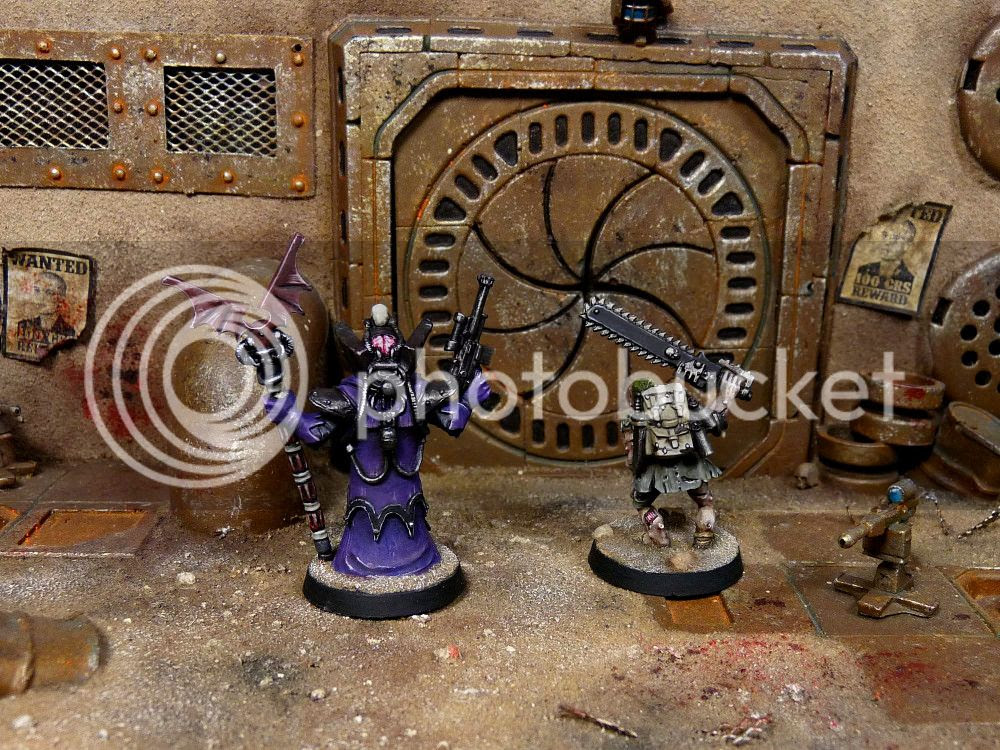 *one of scalies got missing after the bloodbath so there's recon & rescue missiion ahead
** that's right, every member of my gangs has the name