"When Egrimm van Horstmann was ordained as Grand Magister of the Order of Light he was acclaimed as the youngest and most gifted wizard to rule over a magical order. As he knelt down and swore allegiance to the Emperor, no-one guessed that his loyalty had already been given over to another, far more sinister master.

As an Apprentice Chanter of the ritual bound Order of Light Wizards he served under Master Chanter Alric, the Saviour of Apesto, who taught him many of the order's ancient secrets. But all the time he served the Order of Light, Horstmann prayed to the gods of Chaos for the power to defeat his peers. His progress was rapid. By day he studied Light Magic, and by night he pored over ancient manuscripts devoted to the lore of the Chaos gods. Daemons of Tzeentch whispered their timeless secrets into his sleeping mind and Egrimm's evil powers waxed strong..."

So it looks like I can finally cross another painting goals off my short list:
one of my favorite models ever is now considered painted therefore it's sealed and placed in the comfy glass sarcophagus.

All in all I am very happy to know I won't have to fu*k with it anymore but just like in case of my beloved zombie dragon I know I should've spent some more time on finishing the beast. It's the thing I hate the most in such models: they have tons of character, they were sculpted the way I like the most (~5th ed Warhammer) but they are also nightmare to finish properly:
- assembling is pain in the ass
- manipulating is pain in the ass
- there's lots of surface to paint so waiting for the result is (for a change) - pain in the ass.

Apparently I am just way too lazy git to give such models paintjobs they truly deserve nevertheless I felt stings of remorse painting the dragon the fast, just to take it away from the desk. There was much more fun painting marauders, the sorcerer and minis fighing in the tunnel below. And this is another reason to bitch about:
once again I was trying to make model tell the story. The idea was to show ye corrupted Olde Worlde where mighty servants of Chaos march proudly through Empire of men, and even very guts of Earth are being consumed by chaotic ratmen.

Now watching at the piece I think I should've probably dropped the tunnel idea, even tho I had some fun making it the dragon is just too tall now. Oh well, at least I tested sculpting mushrooms and spinning spiderwebs - these should be more than useful on the next big (dark and necro...) thing I am planning.

So with no more babbling:
here's the official, minblowing paintjob... 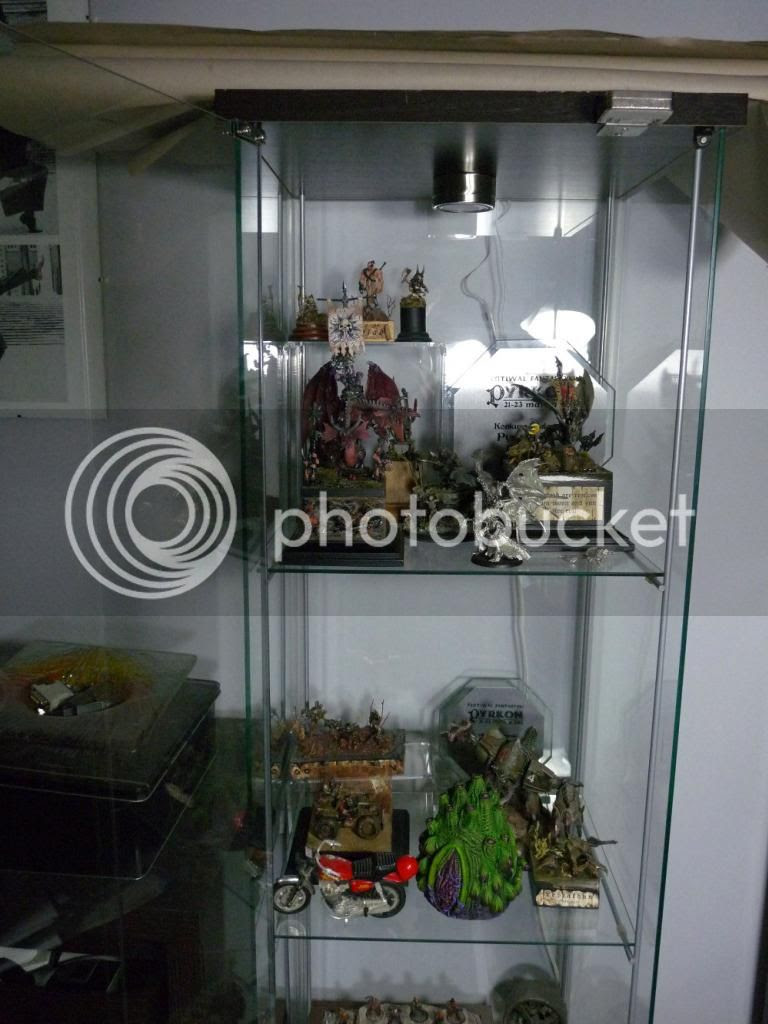 And here's the piece itself.
Oh yeah, taking the pics was also pain in the ass! ;)
Hope you like it! 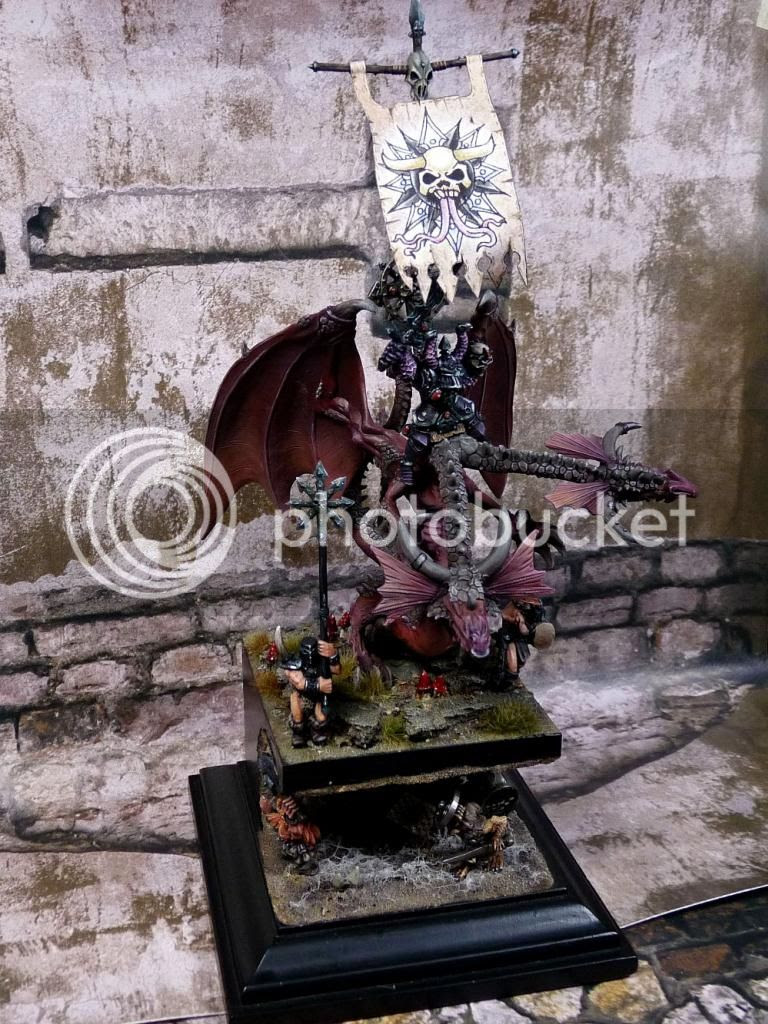 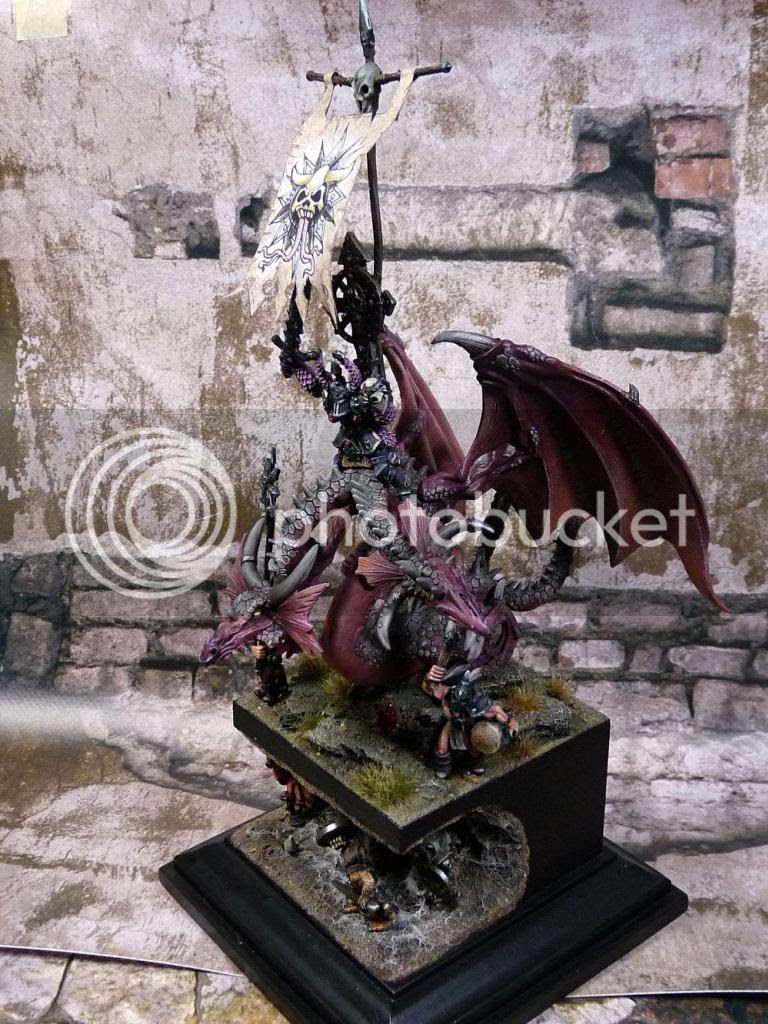 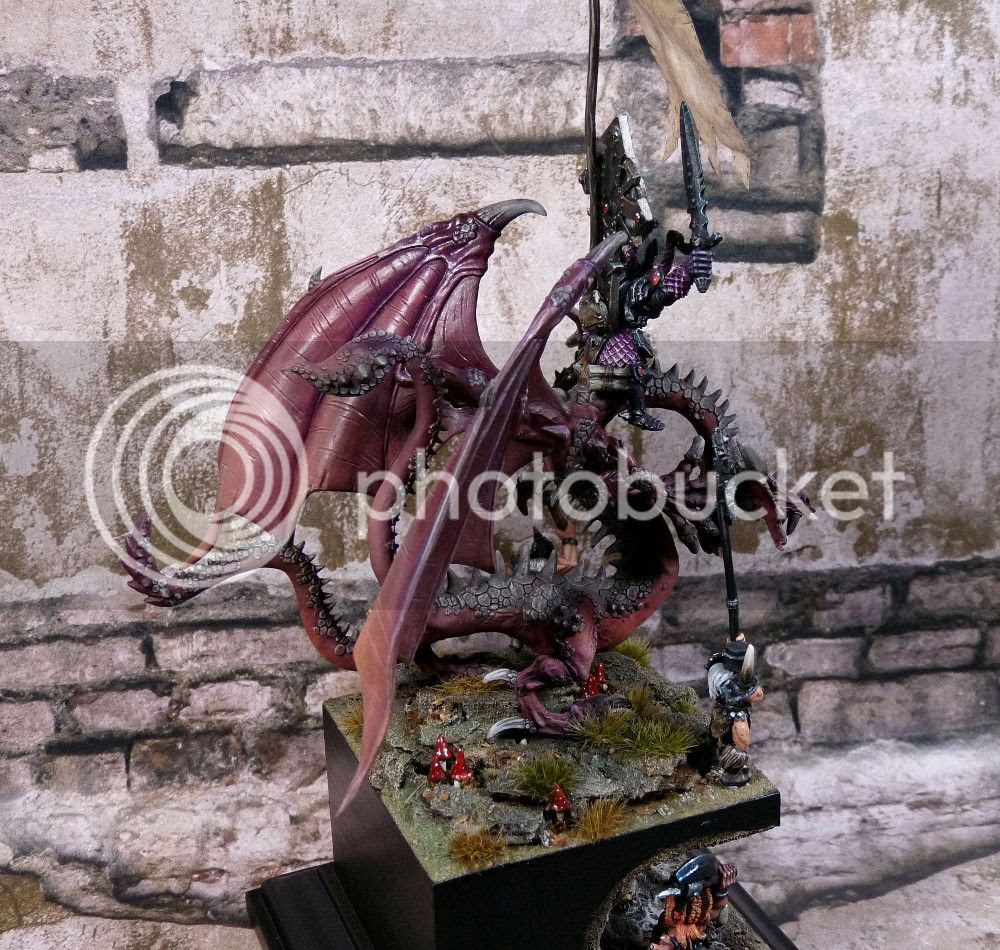 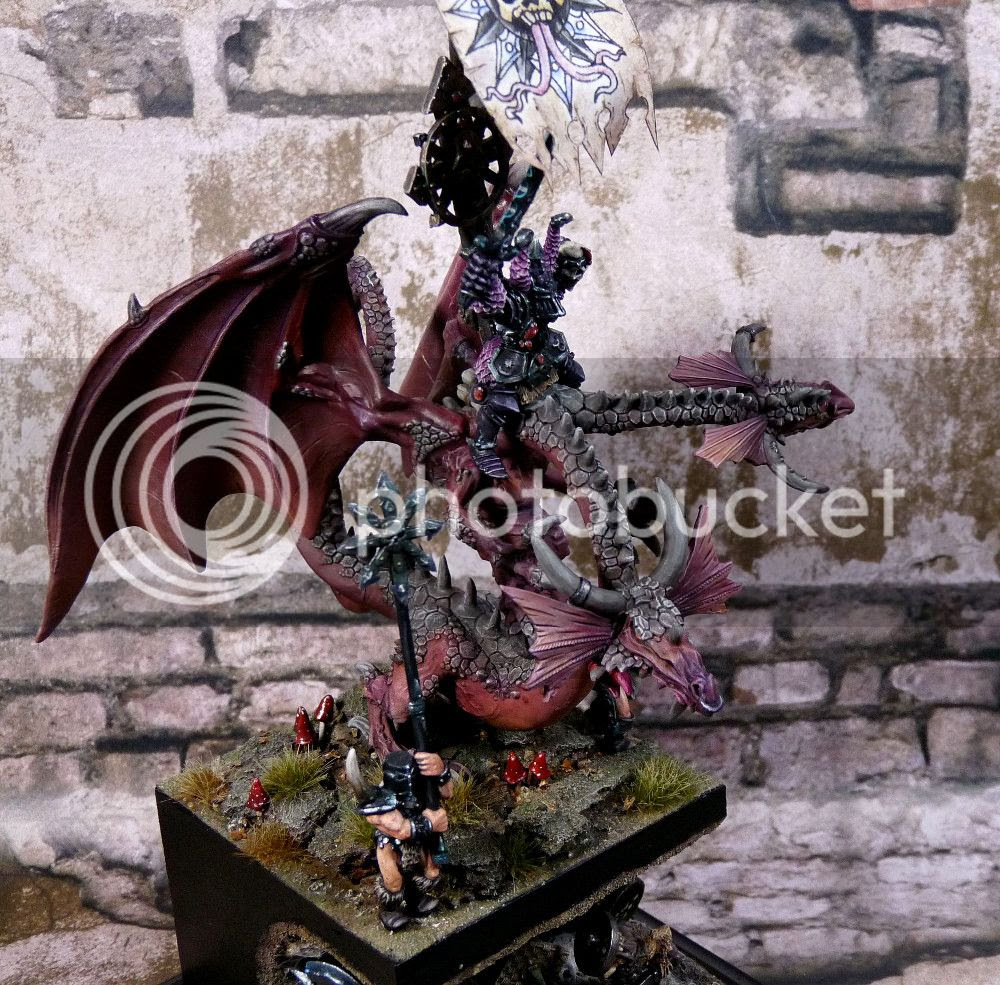 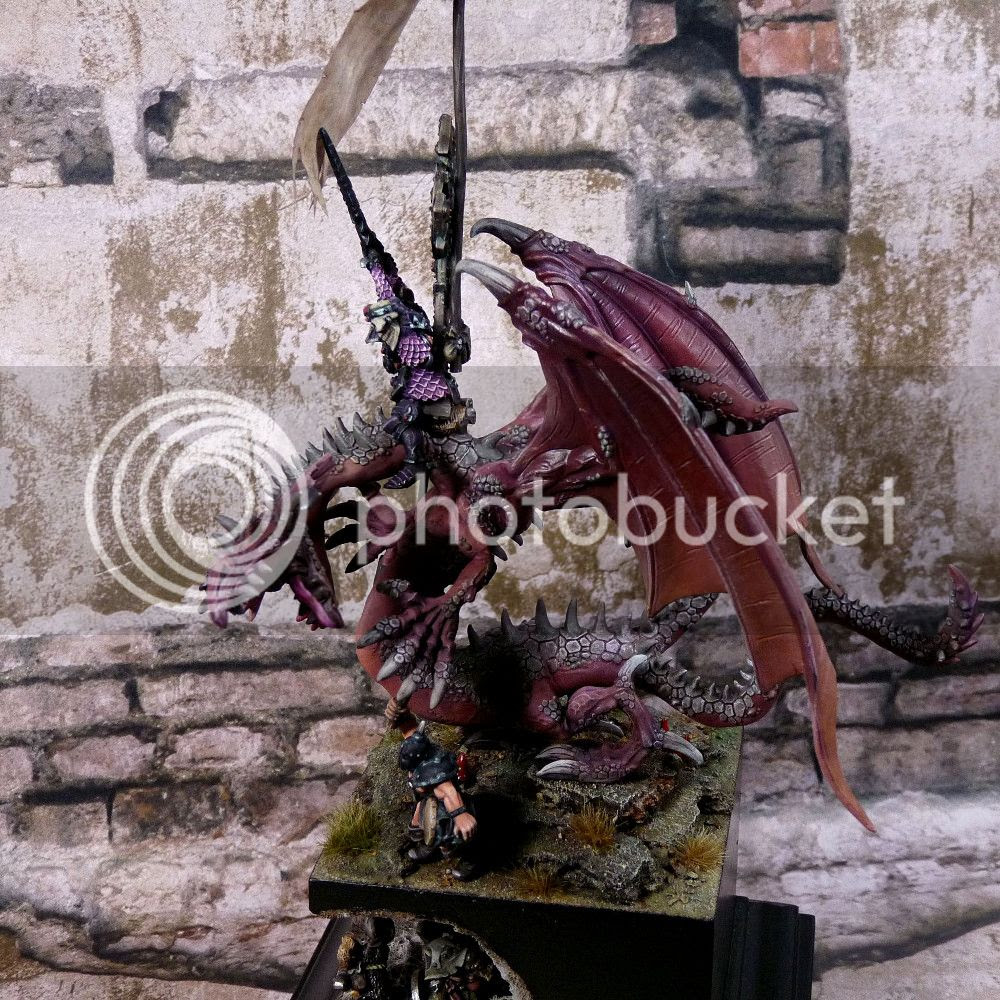 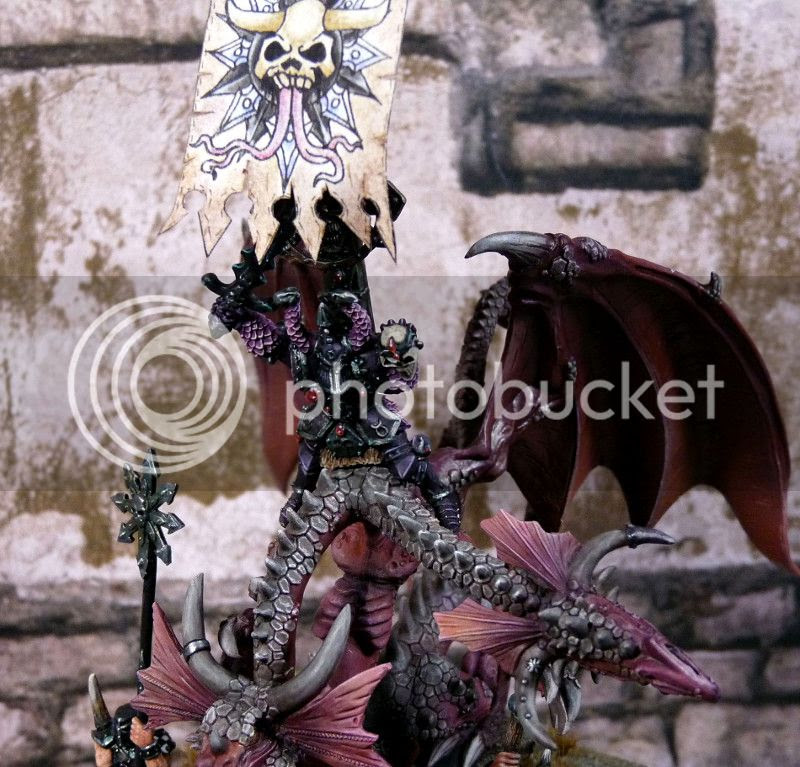 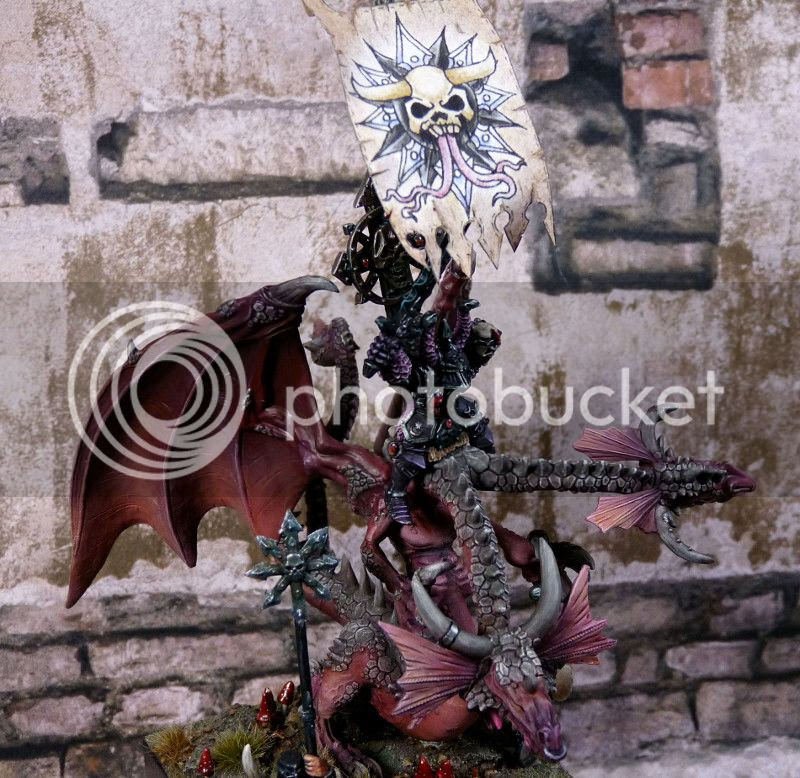 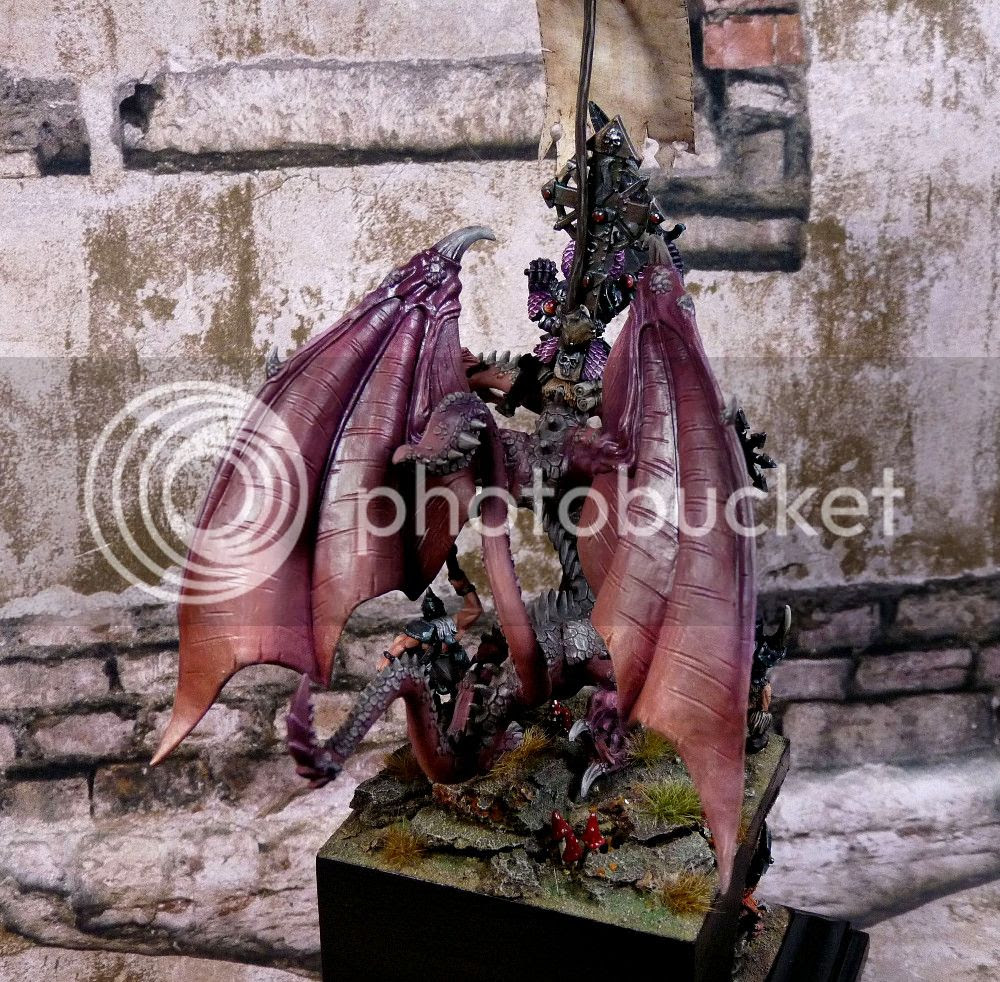 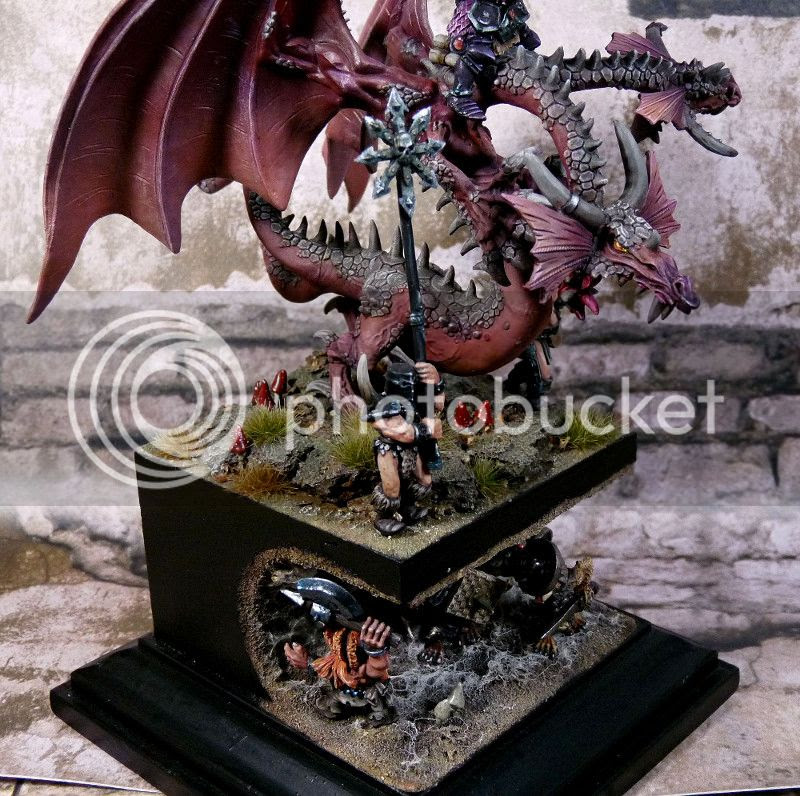 This time it's something quick. And delayed on purpose.

First - I finally decided to give a try to 15mm scale minis. Some time ago I got some scavengers and mutants from Khurasan Miniatures but sadl they have just been stored in the sarcofago. Until now.
The reason for digging them out were latest posts on Tales from far point bloggy:
the guy started sculpting stuff based on classic Warzone game! And since I am suffering from serious Warzone fever I simply could not resist!

So there was no other choice for me but trying to paint at least some of 15mm tinies from the junk pile. I had no special bases for the minis so human sized ones were put on small washers (?) while super mutants on standard 25mm round bases. Looking at the pic below I am seriously considering getting some 20mm round bases though...

I took the pic with Warzone nepharite of Algeroth for the scale purposes.
When I placed models next to each other I realised what the charm of small scale gaming really is:
1.you can carry whole battlegroup in the pocket,
2.standard size battlefields provide way more space for manoeuvres,
3.large creatures from other games grow now into huge monstrocities! 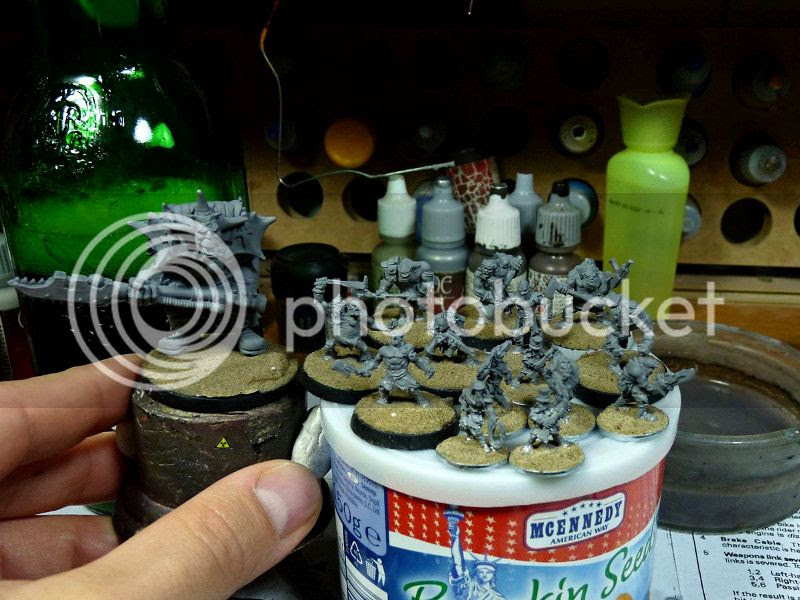 And now the reason of the delay: zombie!
But this one is bit special (well every zombie is special for me in some way): the model was sent to Vikotnik in exchange for some goodies I got a while back. I waited with publishing until the model reached the destination.

It was a nice change to paint a classic piece from Necromunda range. 2 models like this are already members of my Scavvy gang so didn't need much another the very same sculpt.
The zombie has been very slightly modified: right arm was repositioned so I could add a banner, I also added bit cloth on it to hide the cut.

Paintjob has been sealed with solid layer of matt Revell varnish, so it should arrive safe and sound. That is of course some frenzy driven postman decides to stomp on the parcel or something... I mentioned it before - Revell makes really brill sealer but it just ruins any metallics. I gotta find some other stuff for metal parts - satin varnish should do the trick. 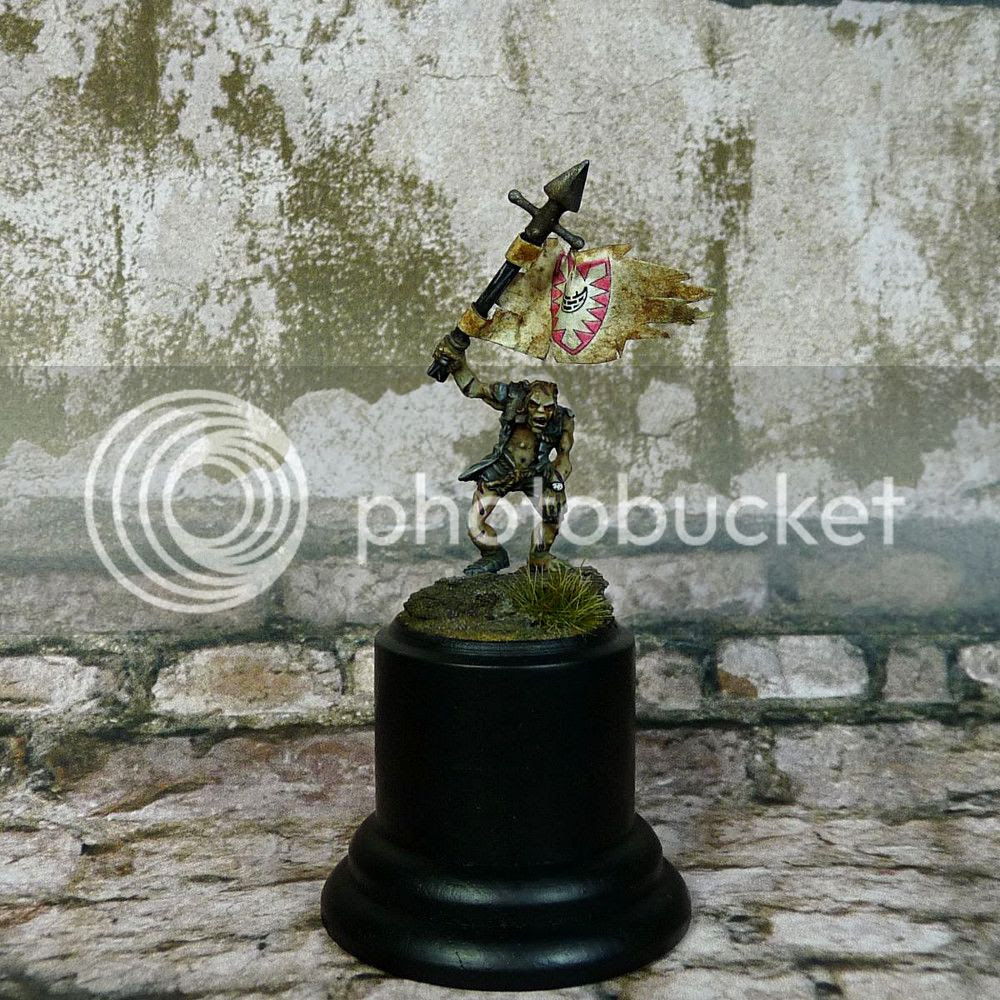