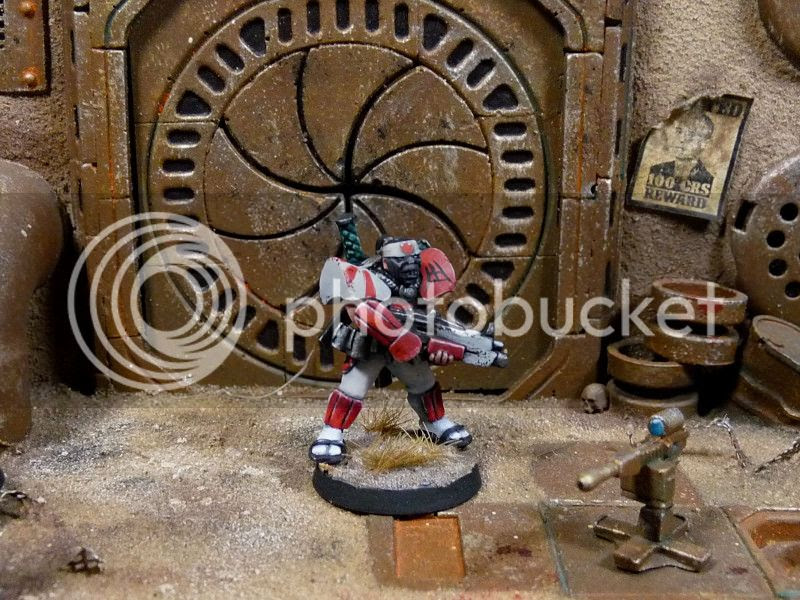 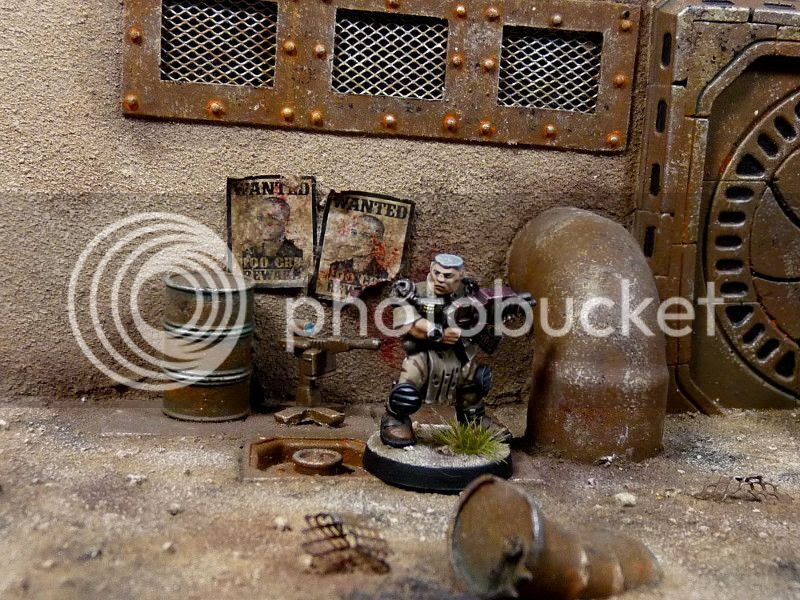 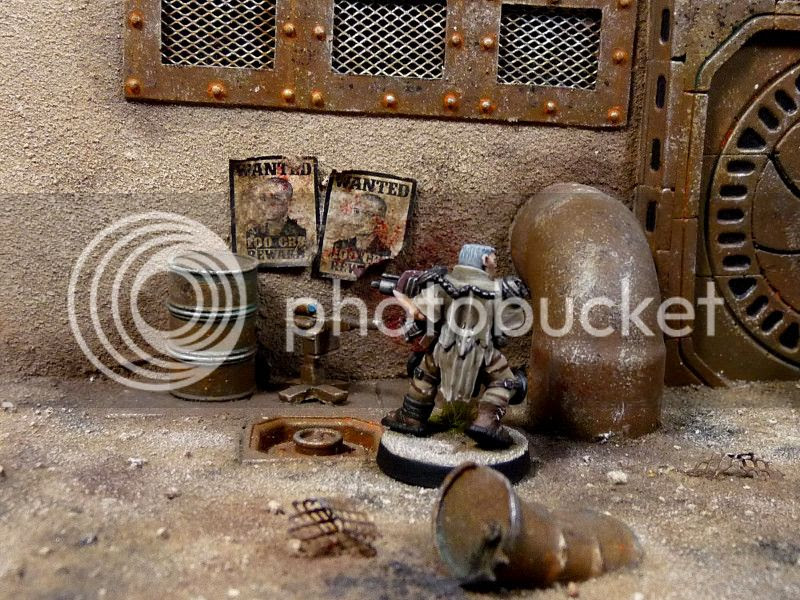 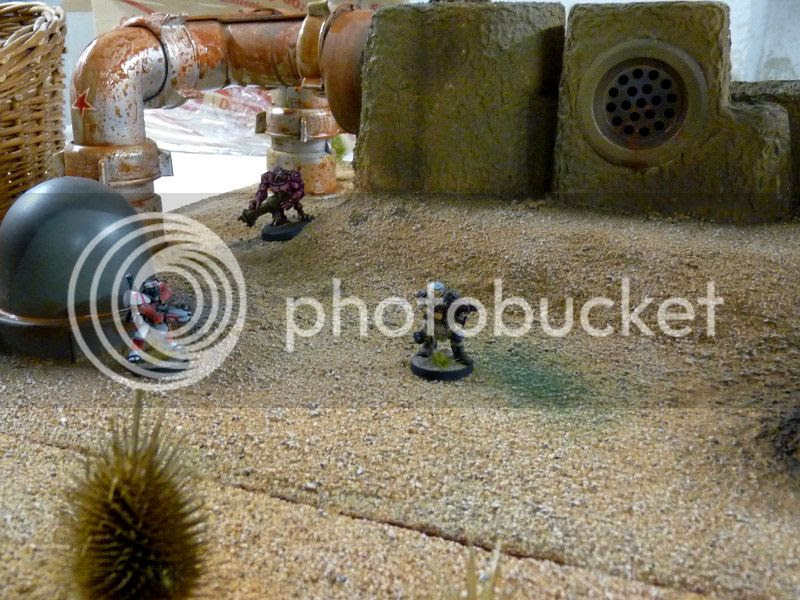 The question is important enough to get separate post.

I really like miniature exchanges.
I've participated in all ME's organized by Nameless on Chest of Colors forum (there were 6 of those) and from what I know everybody had lots of fun of it.

Unfortunately I don't think there's any chance for another exchange coming on the forum anytime shortly* so I've been thinking maybe there's enough of painters interested in such event among fellow bloggers?

At this point it's just the idea,but I'd like to know would anyone of you be potentially interested miniature exchange?
I wouldn't like to spend my time working on the rules if there's nobody to play with, heh.

*or just ever =(
Posted by demi_morgana at 5:11 AM 4 comments:
Email ThisBlogThis!Share to TwitterShare to FacebookShare to Pinterest
Labels: IABN, miniature exchange

Like a Monty Python's 16 tons weight.
Sadly in real life there's not much laugh about it.

But everything is moving on so hopefully sooner or later sun rays will dissolve dark clouds which gathered above me.
Right... let's go back to the hobby - this is not a weather blog after all.

Since the previous post there was something going on in the toy soliders matter.
I am glad with a little dose of self discipline (and dropping some sleeping time) I managed to organize a day so there is bit painitng time almost every (late) night.

So let's start with Full Thrust.
The game is constantly good fun, since the last blog update we managed to play 2 games. The innovation was using bigger board (200cm x 200cm) but I think we will reduce it (180cm x 180cm*) to make moving models slightly easier. Bigger board gives more space for manoeuvres bringing even more fun.

And since we're in the space there are 2 pieces added to my annual painting summary:
Kiang class light cruiser and cosmic station mounted on an asteroid.
The ship was another quick paintjob as the rest of my Full Thrust stuff (small scale stuff FTW!) - again I used the same paints so when the last model is finished whole group should look very decent, especially on the deep space background.

Building the space station was also quick and pleasant process:
I simply got piece of pumice, glued several chunks of it using green stuff and superglue and added various bits: these here are leftovers from T-34 (if I remember correctly) tank model** and some electrical junk. Whole thing was covered with base coat mixed with PVA glue, drybrushed and after painting the installations that was just it.
Quick and easy.

I still have some pumice left so if the base works fine during the game I think I will add one or 2 more stations. Each and every way to reduce pile of bits is acceptable. 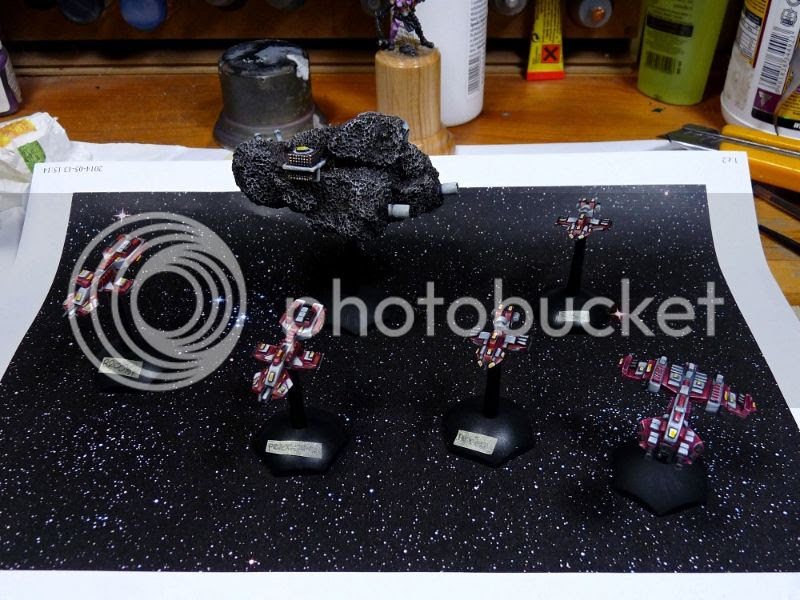 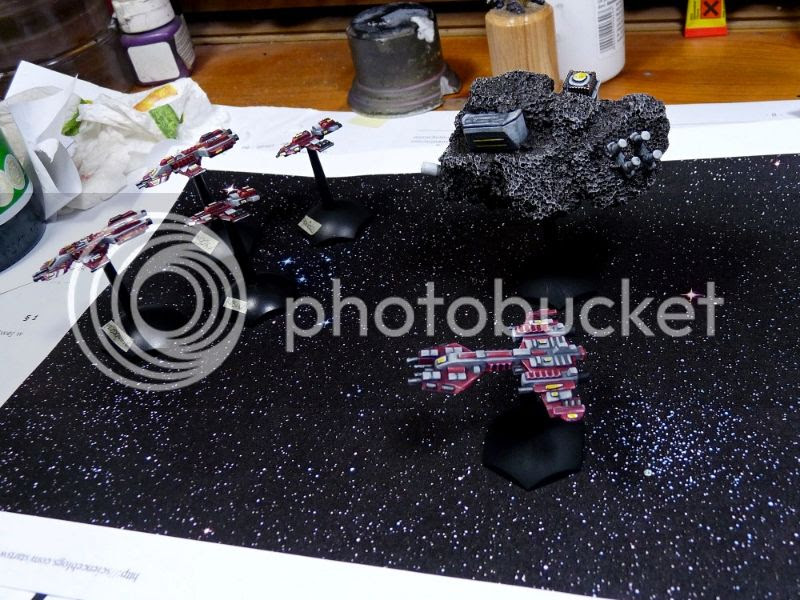 The reason it's been a while since the previous log update rides Chaos dragon:
Egrimm van Horstmann is finished!

Well... Only Egrimm... The mount is still waiting for some paint.
As for the rider I like the result - it's probably because it's one of models I wanted to see finished for a very long time (another old "beautie" is Dieter Helsnicht riding the manticore). Main concept was to paint it "bright" but now I think the darker version is even better: it will contrast nicely with the base and I can paint dragon's flesh pale so the sorcerer is even more striking.

The banner pole was slightly modified - 2 bars were added so I could use paper standard from old Chaos army book. Originally it was chaos knights' standard but I removed chaos stars and printed bit larger than the original.
Paper banners kick ass, especially in case of old school miniatures.

The next step will be filling all those damn gaps with milliput and I can start the job.
I'd really like to see it finished within reasonable time so I can bring it to some contest.
Any contest really, after this year's Pyrkon it turned out my models really enjoy travelling.

Pictures are damn bright even though I put filters on the lamps, so I am guessing I will have to ask somebody for help with taking decent photos. 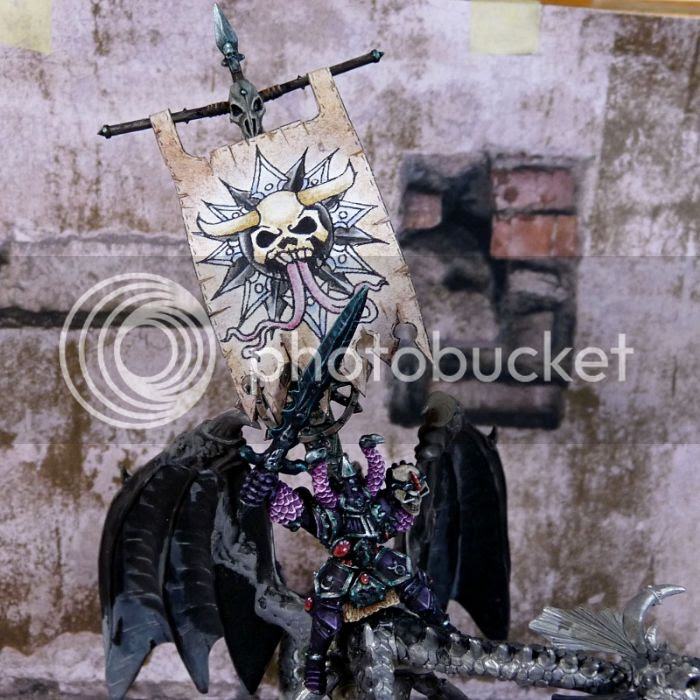 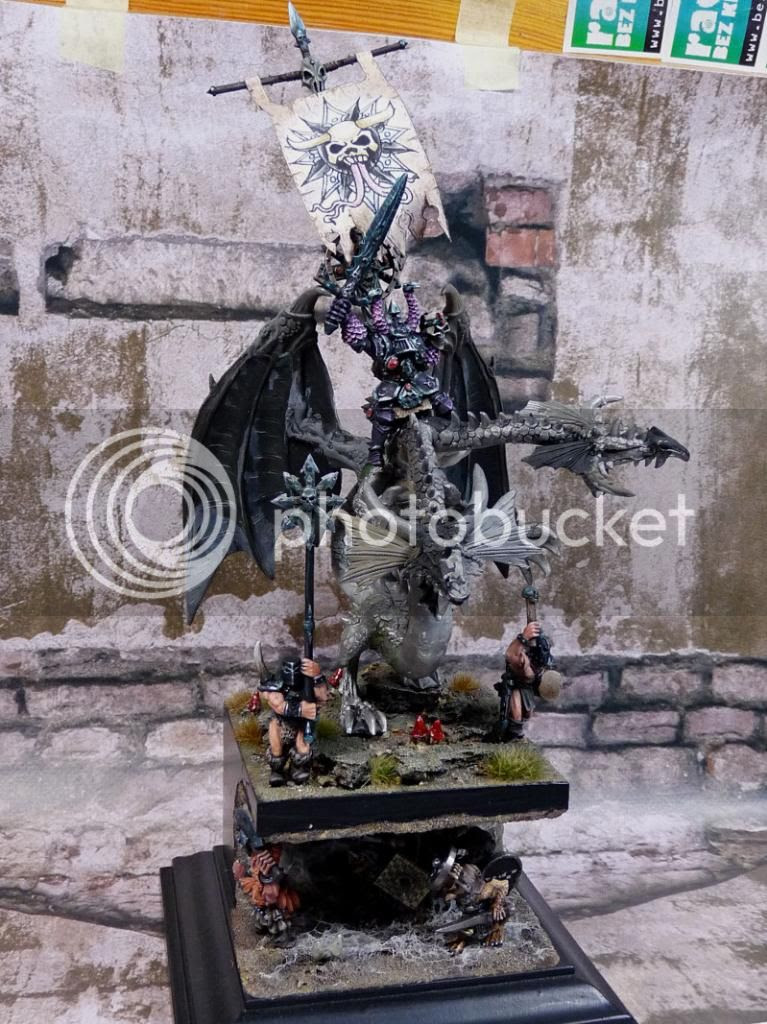 And the last thing for now - pretty surprising for me:
I finally managed to paint Necromunda Escher ganger!
I really have no idea what is the reason but even though I love this gang I haven't managed to paint any ganger (or maybe: gangress?) until now. The piece is the gift for my buddy from real estates appraisal branch, which makes the paintjob bit more special.

The model was painted using colors I'd like to see on my gang: leather, spikes and pink here and there. Classic look of a pervert ^^ from 40th millenium.
Or any other millenium.

Anyway I had fun working on this toy so I hope to paint few more sistazzz shortly.
Maybe after the dragon is done? 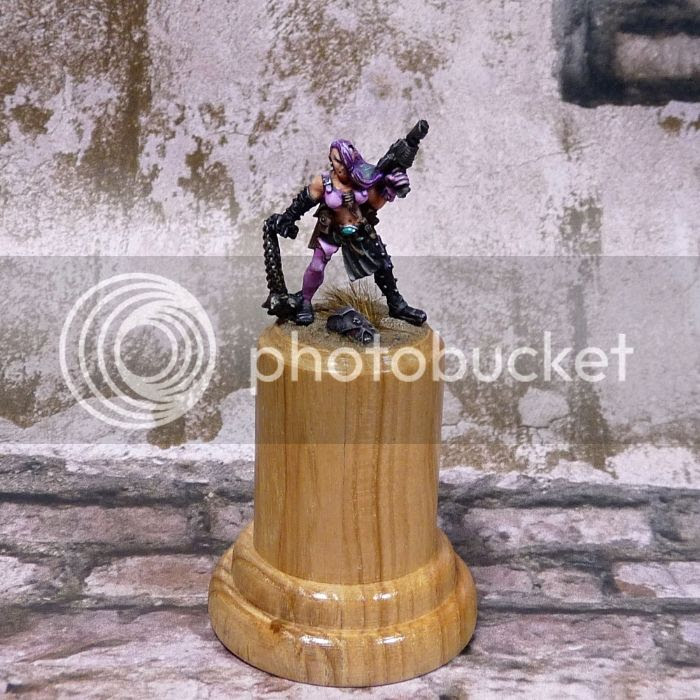 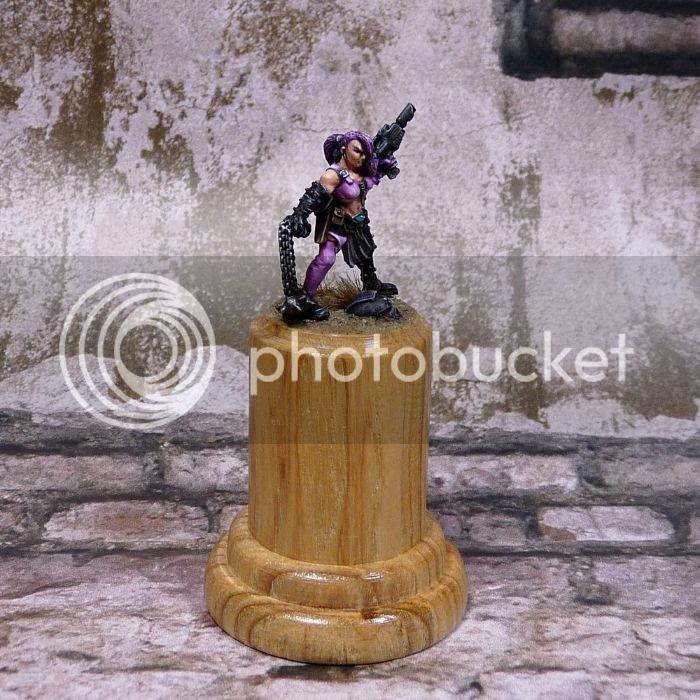