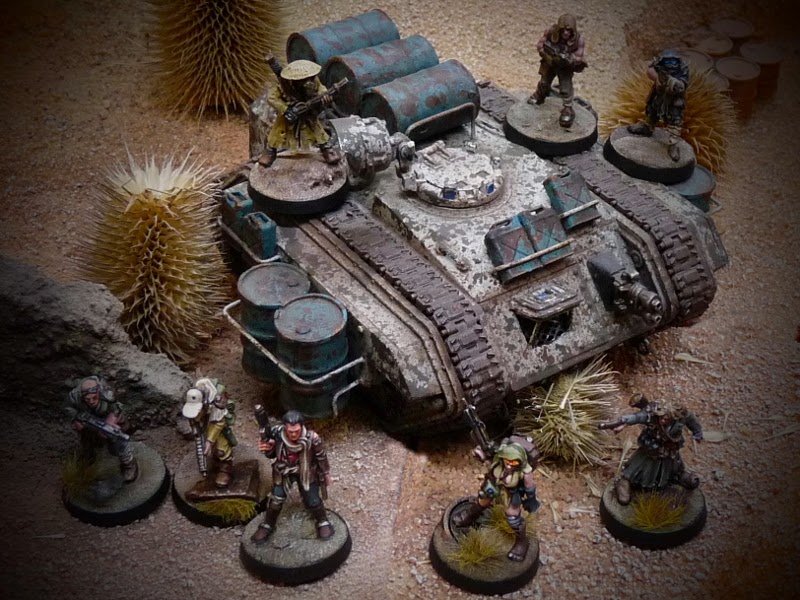 The previous battle report turned out to be quite a success so here's another battle of the fresh campaign: Goliaths vs Orlocks.
As mentioned before we decided to modify some rules and add some other to make game more enjoyable and spicy. After last post I was asked to present gangs so here they are.
The game started with budget of 900 credits per side. We play 100% WYSIWYG so there're no heavy weapons, there's only one flamer on Goliath side. I think the fact there are mostly basic weapons, knives and grenades in use makes the game more exciting and brutal.

After last battle report I was asked to present the gangs so here they are.
Remember these informations are semi-classified so let's keep it just between us and rest of internet. Lucky me not many people reads my stuff...

In the first game both gangs lost a juve - Goliaths buyed it back (fattie named Pixie 2), Orlocks invested in some gear (infra red googles for Cancer and screamers in case of rescue mission, from my experience: if you can get screamers and stummers - take them!):

This battle is continuation of previous struggle:
during last match Orlocks managed to take over Chimera, but were not able to start it and leave the battlefield covered under vehicles thick steel plates.

So now the game set up and some home rules:
- scenario is based on normal gang fight mission (for purpose of gaining experience, bottle test etc);
- treachous conditions apply of course, TRUE playazzz fight on level hard biatch!
- Orlocks defend the haul so they start around the Chimera: one, randomly determined model doesn't fight - he is inside the carrier trying to start the engine;
- we have some general ideas about moving tank and performing actions but it's to be tested in the field first (might come handy later - I have another tank to use after all);
- Goliaths are ambushers - last time they bottled out only to reload shotguns and grab some more grenades, models can be placed along any table edges;
- Orlocks set up models first;
- starting player is randomly determined;
- I thought it's good idea to switch gangs (to make players avoid stupid, suicide actions) so this time I am running Goliaths;
- mission objective: either killing each other (gang fight scenario) or starting the engine and driving Chimera off the battlefield;
- the idea is gangs didn't expect to find a tank not mentioning - in working order, so they rather want to grab it's (most probably tasty) content instead of blowing piece off; therefore there's no anti-tank weapons, melta bombs etc - nothing to destroy Chimera, the best you can get is breaking tracks with frag grenades (we still have to work out the procedure). On the other hand flamer should also be fucking deadly for tanks: burning gasoline getting into exhaust system or vents is just more than nasty...
- my bro dropped in when we were playing so he got some plague zomebies and scavviesto run NPC. The story is: something bad happened in toxic waste dump where scavvies had camp. Some glowy goo leaked from old drums straight into zombie farm making them pretty restless. Restless enough to make them runaway to the desert (surely they smelled fresh meat). Scavvy boss assembled partol which was sent to make sure they either come back where they belong or be put down.
Long story short: plague zombies enter random table edge in 2nd round, scavvy zombie-sitters - the following round.

That's more-less it.
Anorther new thing you're probably noticed are photos:
we spent some time working on photos taken, and my opponent did great work adding the background and special effects. There're still some bits to work out but I think we're going in the right direction. Let me know what's your opinion about the effect achieved.

The roll for treachous conditions for this time is long shadows - extra cover bonus for models behind cover (saved arses of my 2 gangers).


So here's the start:
my team started in the very middle of the board, around Chimera apc.
Cancer (ganger wearing strawhat) started inside the tank trying to start the engine somehow. There was no mechanic or anyone from tank crew so we decided starting the machine and making turn was after successful 5+ roll. 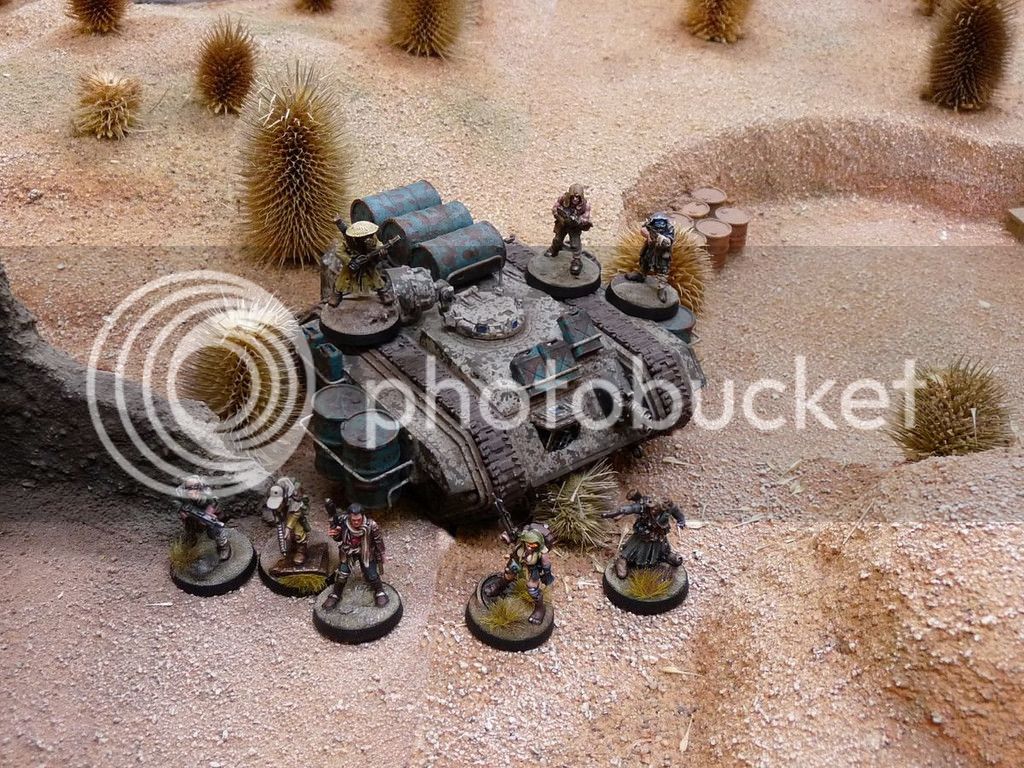 Goliaths were the ambushers this time:
they came from the ruins which provided lots of places to hide. They were really close - after round of advancing my men (and the tank!) would surely get withing frag grenades range.

I got the first round:
didn't expect to see much shooting from Goliaths but since there were only 7 men in the open field all moved either to get some cover or to get better shooting positions. Not mentioning the fact Cancer somehow managed to start the Chimera in the very first round of game and even made 90 degree turn toward edge, where driving was possible. At this point things were looking really sweet for Orlocks.
But there was some strange and reaaaly nasty smell in the air... What could it be?
Probably just those damn savages, Goliaths, nothing to worry about... - said Orlock boss.

Goliaths time! Time to get back what's ours! There is ammo and fuel in the tank ahead!
Whole gang advanced fast and swiftly, finding fine cover behind bushes and ruins (well, not exactly whole gang: Sinatra got head wound during previous battle so for most of the time he was staggering in the corner building or just babbling to smart looking stones).
Stiglitz, Jason and Pixie 2 moved closer on the steel walkway. They were damn close and well covered - the next round I could expect clusterfuck raining down on my positions.

Round 2 began with a surprise: group of villagers came from the side Orlocks were heading for. They must have been pretty tired and hungry. And probably injured...
They were walking kinda weird... And dirty for sure... That smell...
- Boss?
- Yeah?
- Is it just me, or is that villager in the front missing half of his head?
- What the fuck are you babbling about? What... The... Fuck...
- ...
- PLAGUE ZOMBIES AHEAD!!!

That doesn't require comment: those things were coming. Really quickly (modern time zombies after all) and extremly dangerous. And that's not because we forget a bit about their special rules and decided only head shot can take them down: total immunity to pain.
Definitely result of toxic goo accident... Damn Scavvies...

There were lots of targets for Orlocks to choose:
main threat were zombies getting closer and 2 Goliaths on the hill preparing frag grenades. Spectre (guy in the crater) aimed at the first deader while Sanders and Bad Larry moved out from tank's path and tried to deal with advancing savages.
I was lucky again - tank driver not only managed to make successful turn but also advanced slowly. I was hoping to simply run over plague zombies next round and leave the battlefield shortly after.
Rest of my men prepared for the coming battle - 2 gangers moved into the ruined building, the other 2 were waiting for Goliath boss to appear on the top of it.

Spectre aimed well and put a bullet straight into closest zombie's head - this one ain't gonna bite anyone ever again. Guys close the Chimera were less lucky - both missed!
I was hoping the grenade shrapnels would scratch at least one model to cause panic test but apparently I run out of my share of luck for this engagement.

Golaths attacked with all they had. That was just horrifying!
Stiglitz and Jason attacked from above but they only made my juve pinned! And Jason run out of grenades! The boss was trying to finish my model off but this time long shadows came in handy - another miss! There's no way to finish the game nice and easy...
Gangers threw frag grenades on men - first one hit the tank and damaged only, rusty track, Chimera was now immobilized! The other Goliath was less lucky - grenade slipped out from his hand and exploded. Model was pinned but nothing worse happened.

On my back Pantera was trying to take down either Orlock boss or his living shield... eee... sidekick, but his manstopper shell missed. High time for Orlocks to regroup and run for the hills when all gangers are still alive and able to run...

Time for Scavvies to move:
at the beginning of the turn 3 zombiesitters arrived - straight ahead of the smoking tank. They were quite smart so all took cover behind ostropests after advancing cautiously.

Zombies weren't into more tactical moves though:
all the rottenbrains shuffled towards warm meat - 3 of them put their damn dirty hands on Gravel and Spectre, the others weren't so fast. This round...

The result of that charge was quite easy to predict: Orlocks are way better shooters than melee fighters. Worst thing was I had to roll for infection during post battle sequence, but both gangers were clear. Not mentioning serious injuries...
Shit got pretty thick for Orlocks: enemy getting closer and not much chance for safe escape.
Bad Larry pulled out stub gun trying to take down Dexter (on the hill), Cancer left the tank and also aimed Goliath scums, the boss and his aide aimed at command team on the floor.

I had some more dirty tricks for this time:
Prozak left the building taking enemy from behind - autogun and grenades will be more than useful, while Gillian fired at Pantera. Was deeply hoping to get rid of half on Goliath gang withing seconds and make them flee.

Everything started really nice:
grenade tossed on the floor missed but scattered only 2" away: Golath boss got hit and went down, ganger standing next to him fucked nerve test and runaway.
Sanders fire at Pixie2 - he was hit, wounded, failed initiative test, fell down, got another autohit and was taken out of action. Phew!
As the same time Gillian fired from the building and wounded Pantera, his buddy was pretty controlled and refused to runaway. Bastard...

The same time Prozak put a bullet in the back of Goliath chick head.
Those bastards were hit pretty badly so I was hoping they will either leave the battlefield voluntary or screw bottle test - the leader was down after all.

They didn't.
The test was passed so Goliaths decided to take as much opponents to hell as possible, before plague zombie wave consumes all.
Haig finally got opportunity to give flamer a try: the shot costed whole fuel supply but nearest zombie got hit and started burning! Field medic, Angel, tried to unleash shrapnel hell but grenade turned out to be dud.
In the centre Rip charged Bad Larry taking him down with ease. Bloody savages...

I had some ideas about coming future but it was Scavvies turn:
zombiesitters advanced hoping to deal some damage with their shotguns (whatever Scavvies carry) while plague zombies charged towards fresh meat engaging Rip only.
We all know Scavvies aren't marksmen gang, but it was no problem for Spike - he took my ganger off the tank in big style.

Rip was pretty experienced fighter but he only managed to defeat only one zombie, the other one managed to inflict serious bite taking ganger out of action. Facing those enchanced zombies were fucking nightmare!

Orlocks turn:
the boss lokked around, saw half of the gang bleeding so the only wise decision was leaving the battlefield. It's a campaign game - sometimes it's better to drop extra 10 experience points to avoid even more serious injury tests.
So below the field of glory from the necro-drone. The game was fun, I am hoping for revenge shortly.
Also hope you like new enchanced photos.

That's it - till the next time!