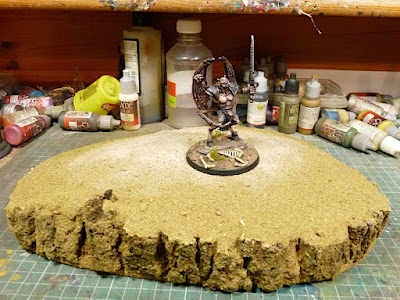 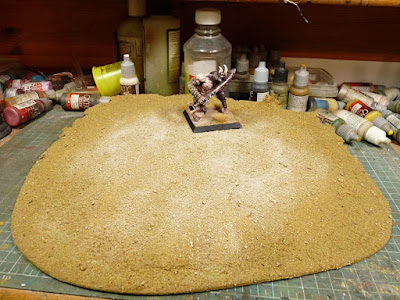 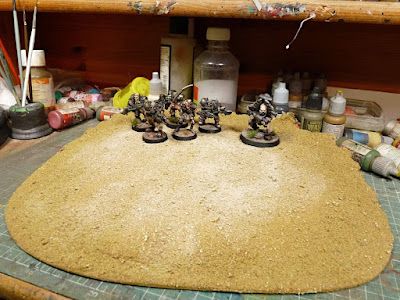 This time something rather quick, easy yet essential for proper gaming: terrain piece.
Actually there are 5 pieces 😊 I got these after Road to Berlin event but somehow until now didn't find enough steam to bring them onto painting desk. But since we're about to play annual Warzone game (HUZZAH!!! 🥳), finally with both armies fully painted and on brand new battlefield, decision was made to upgrade it with some line of sight blockers.
As mentioned above it was tournament random prize. As for product itself it's very decent stuff - nicely casted, no miscasts found, came ready to paint straight from the box. Micro Art Studio did good work on these barrels.
As for painting it wasn't much complicated but was rather time consuming because of the oil paints I used plus pigment binders, but the final result is acceptable,even though I've overdone applying pigments. I had that idea to add biohazard or radioactive signs but dropped it, since these are also be used on world war 2 battlefields.
Warzone stuff for the scale. Hope to paint few more heretics before Cybertronic arrives for some serious necro-spanking from Nero 👾 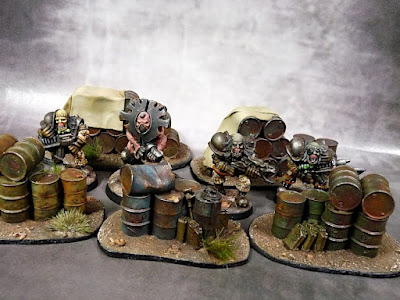 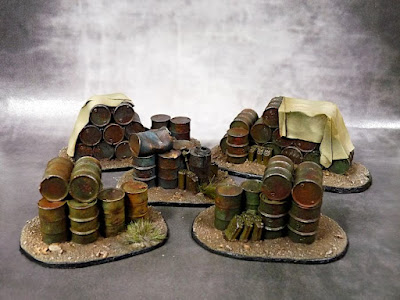 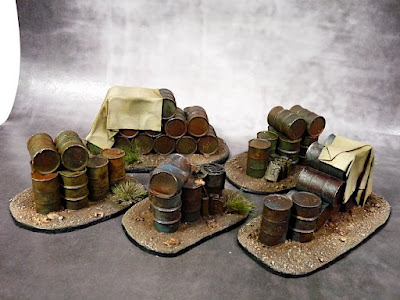 As you can see above I need new, wider backdrop... 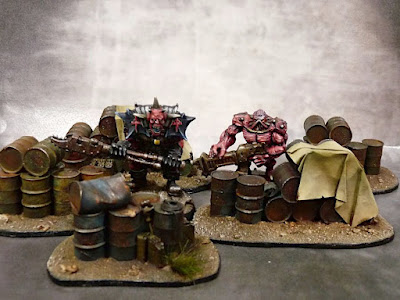 So recently I've painted Semai's heretics trio to provide Dark Masters some more power for the coming Warzone game. My One True Foe is now waiting for his Cybertronic canned meat to be painted so I hope to see brutal battle within 2-3 weeks in Elbląg outskirts area 😊

I remember while finishing my necromutants band I was wondering about painting faces similar way but thought that might look just silly. And that was until I've spotted Marijn's post. I liked his result so much whole team got plastic surgery right away! 😁
Looking at them now I am sure it was right move - such vibrant color in the middle of the model surely catches attention. Now back to painting oil drums... 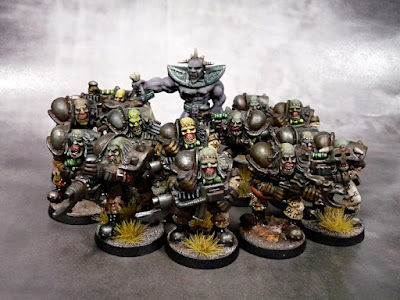 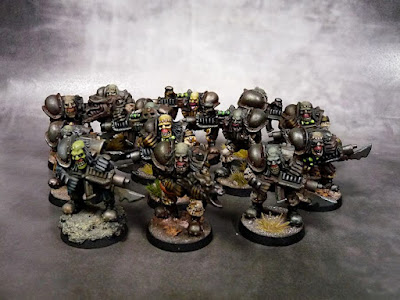 And as for reference materials I've mentioned earlier - some ideas if you want to take your models to necro-dentist, veterinarian or whoever provides them health care 😁 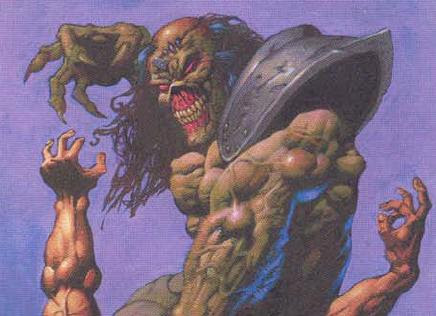 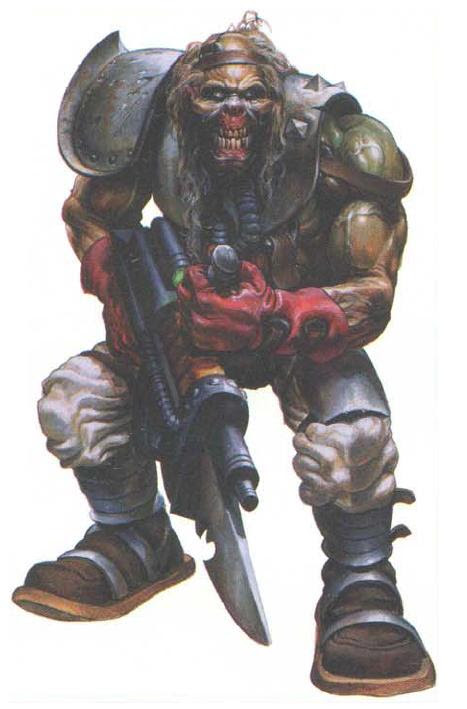 Since I am STILL WAITING for some heavy support for my Bolt Action Hungarians, decision was made to take one more trip back into origins of my hobby: mid 90's. Like 2 weeks ago I gave a try to new way of washing paint off the miniatures and these guys below were test subjects. Heretic legionnaires are Semai's cannon fodder - trusty grunts of Lord of Lies...
Nice story, but sadly only 2 poses were released, of which one (with rifle) is just stupid... 😒 Despite their age I still consider the one with knife & gun cool - even for modern standards.
But there's special place in my heart for old Warzone stuff so each model from this range deserves to be painted. Besides we're about to have annual classic Warzone battle and I need some more cannon fodder - every heretic counts for war effort and Greater Evil!
As for painting I've never liked plain uniforms so tried painting some simple camo using mostly "blu tack" and airbrush. It's not exactly what I expected but still looking decent especially on gaming models. One of models lost it's knife, so it got assault gun from 40k - more DAKKA! for the team. 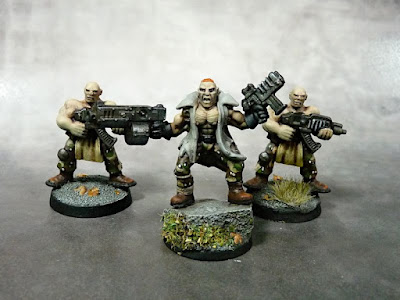 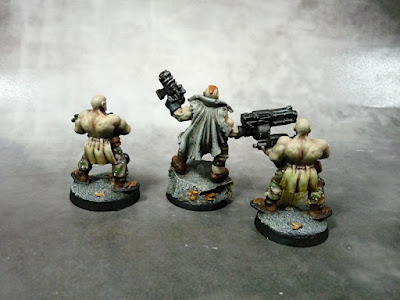 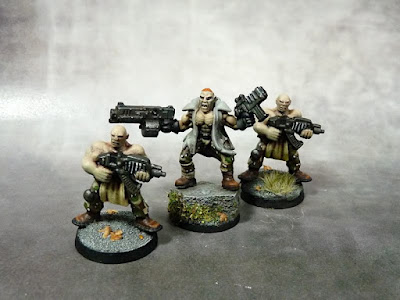 Hope to dig out something much more decent for the next painting... ^^
Posted by demi_morgana at 11:51 AM 8 comments:
Email ThisBlogThis!Share to TwitterShare to FacebookShare to Pinterest
Labels: Dark Legion, heretic legionnaires, nostalgia, Semai, time travelling, Warzone

Eeek! Eeek! 🐭
As mentioned after finishing ogre mercenary clubber I was considering starting Blood Bowl team and there's quite a big chance it's going to be Skaven team. Although I've played the game only once, I deeply believe I can play any game as long as I like the models.
And those stinky, eeking, sneaky creatures are just so damn cool...
But before purchasing any new model (skaven or any other) I decided to paint a test piece just to see what can I achieve to support the Blood Bowl league. Few years back I got pair of placcy rat ogres. These were supposed to be base for some sci-fi conversion, but it turned out I hated these plastic crap so much they both landed on the top of Pile of Shame.
Until last week, when one of these has been excavated...
Not sure this one's going to become a player, but I am sure I wanted to test some colors planned for the team. Skaven are pretty dirty (and stinky...) creatures so to provide some contrast I picked white for clohing and yellow for armour. That should look pretty effective worn by gray-ish creature standing on green grass.
At first I wanted tu use static grass applicator - haven't tried adding static grass on normal size base yet, but it turned out it got broken during last moving. Started digging in the hobby box and found some old modelling flock. It's really old - I guess I got it like 10-15 years ago?
It's nothing like static grass, but looks just fine as Blood Bowl field.
Add green base edge to this and we're back into 90's again! 🥳
I am pretty pleased about this test piece. Apart the fact generally I hate plastic models I could use is for gaming. Looking at the pics and model in th flesh there's something missing. Some strong, focal point. I was thinking about some fresh blood on the claw or on bandages (or on both) or maybe some reddish dirt around bandages.
I'll think about it - there's no need to be hasty while painting miniatures. 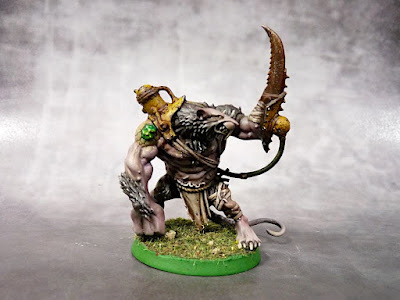 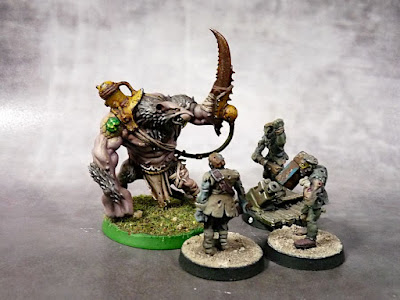 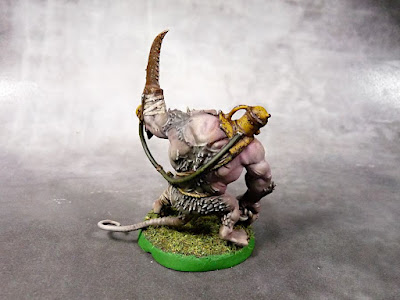 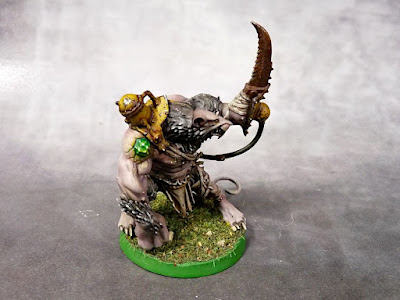 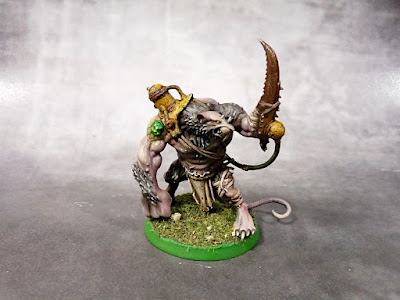