I was planning to post post it bit earlier, but finishing half of the gang took me bit longer than I expected. What is this anyway?
Few months back the friend of mine proudly announced he ordered 3 or 4 warbands for Dracula's America skirmish game. At first I wasn't much keen on starting new game, especially taking place in a world of cowboys and Dracula's depraved minions...

Everything changed when I learnt there's also Church of Dagon posse, and somehow whole fluff wasn't silly any longer.

What I like much more is miniatures range: these are metal (no plastic / shitecast bullcrap) and very characterful pieces. Perfect for pulp gaming as well as for RPG characters (Call of Cthulhu 1920 that is). Working on the models was total fun and really cannot wait to see remaining gangers done.

The box contains 8 models which is just complete gang, but since it's Cthulhu stuff I also dug out and added to the group 2maniacs from ancient RAFM range.
These pieces might not keep "modern standards" but still they are one the best miniatures from CoC range I'v ever seen. (There one one more model in the set, axe-man, but some time ago it was drafted for my Scavvy band).
Hope you like them: 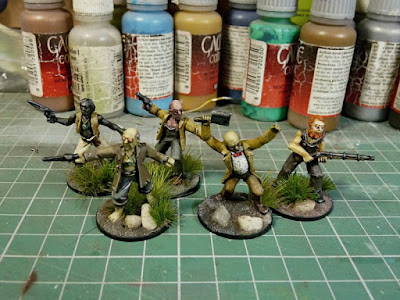 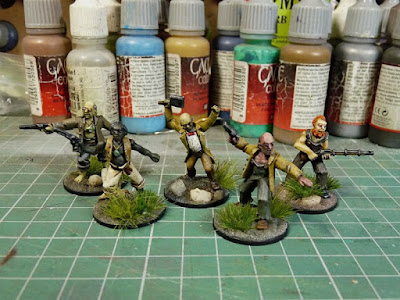 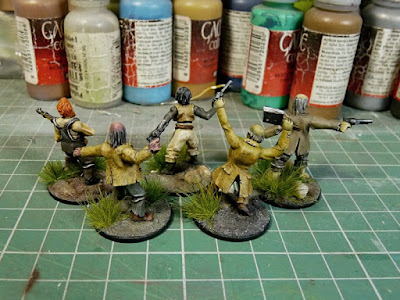 And since it's about Greater Evil I am proud I can boast about finally getting copy of Call of Cthulhu 5.1 RPG. For the second time actually...

Whole thing was line time travel for me.
Back days, when I was like 16 (?) roleplaying games became available in our shithole. Most guys were playing Warhammer Fantasy and Cyberpunk but I chose thay green, mesmerising cover.
I remember the bookstore then I got the book, studying it 'till late night and long preparations before the first game as Keeper of Secrets.
During coming years we played it and had lots of fun but later the group fell apart so I thought I don't need it anymore - so sold it together with all supplements and stuff.

Which was so fucking stupid!
You don't sell your past, nevaaah!!!

Anyway some time back I spotted this jewel on auction and really didn't think twice before placing a bid. 3 days later it was in my place. Even though I don't think we'll get an opportunity to play again, I feel much better having it in the collection.
It's kinda like finding long-lost puzzle. 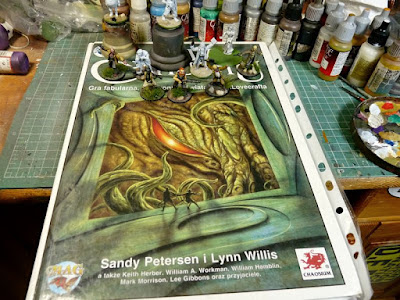 I do not fit to this world.
It's not mine.
I am tired.
Posted by demi_morgana at 12:12 PM 2 comments:
Email ThisBlogThis!Share to TwitterShare to FacebookShare to Pinterest
Labels: Call of Cthulhu, cultists, Dracula's America, North Star, RAFM, RPG
Newer Posts Older Posts Home
Subscribe to: Posts (Atom)