This time it's something wet and nasty...

But before you get some miniature-pr0n here's something much less juicy: Capitol hero.
This ugly... eee... I meant classic piece of sculpt was painted as another member of the Doom Troopers team I'd like to see sometimes in the glass case.
I tested different camo colors here and it's acceptable for my rotten taste. There's no punisher blade on the back because I fu**ing lost is somewhere: I had just a single blade, got it primed and the next day it was gone. Main suspect is one of my cats but since there's no evidence so far...
I will find that piece or find some replacement shortly.

It was nice to cross that model off the 'uuge-junk-pile list, and it's always pleasure to see Warzone model painted. After I find the missing piece model will be sent to one of guys we started the whole Warzone deal here. The old chap was once wargamer and RPG player and now he's a monk =|

And no - nothing cool like monk from Diablo game. Oh well... 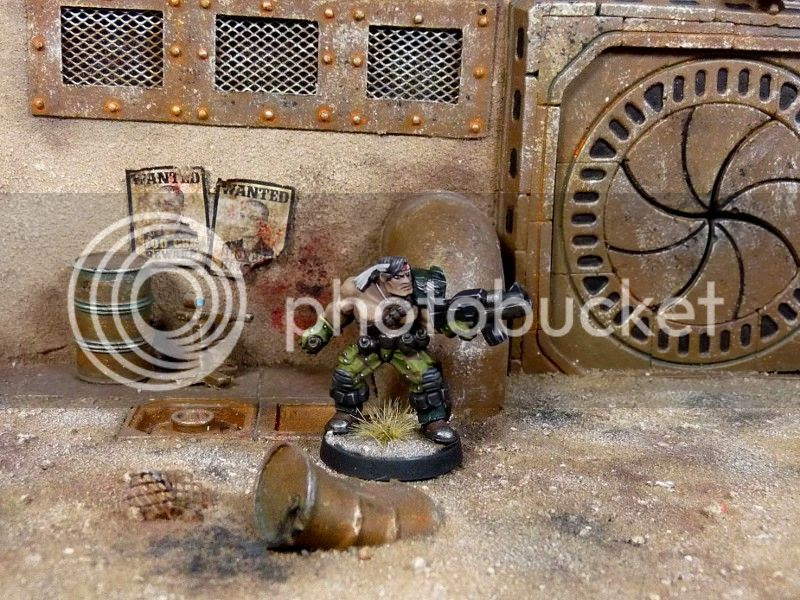 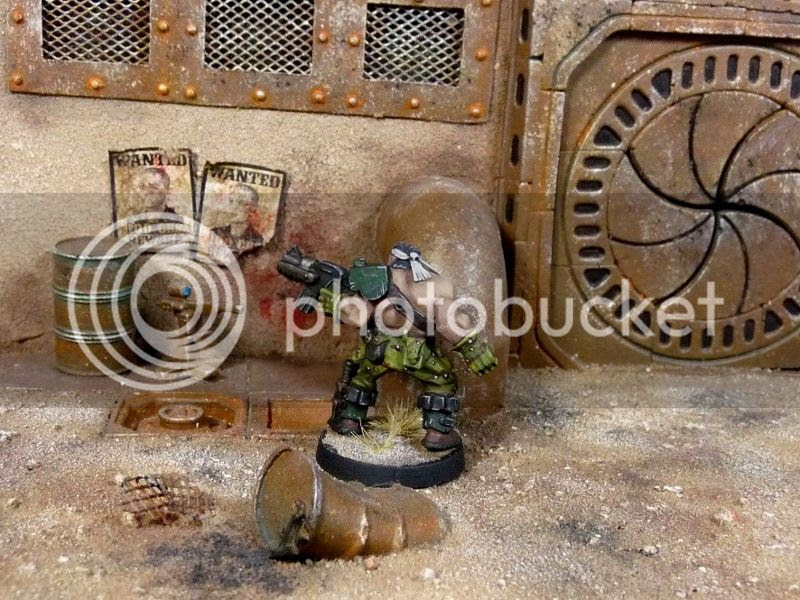 Now it's tome for something nasty and for adult wargamers only!
That's right, tell the kids to watch tv, play football or just get out ^^

I felt bit weird while starting painting the Carronande.
I know some old Warzone models look silly or funny but this one is just one big, fucking disaster. The only bits I like are original crewmen - they are now part of another undead legionnaires squad.
The cannon spent many years in the junk bucket since our Warzone group fell apart so I feel even bigger satisfaction it's finally painted. No matter how ugly it is. As you can see I replaced original wheels with resin ones. Despite my whole tolerance for ugly... eee... CLASSIC (gotta remember about it) minis I just couldn't stand the original parts.

At first I wanted to paint is similar to original artwork (dirty browns) but since the obvious reference to penis of Algeroth I decided to use more organic choice of colors. So here it is - ready to bombard mortal armies with pure semen of Evil. 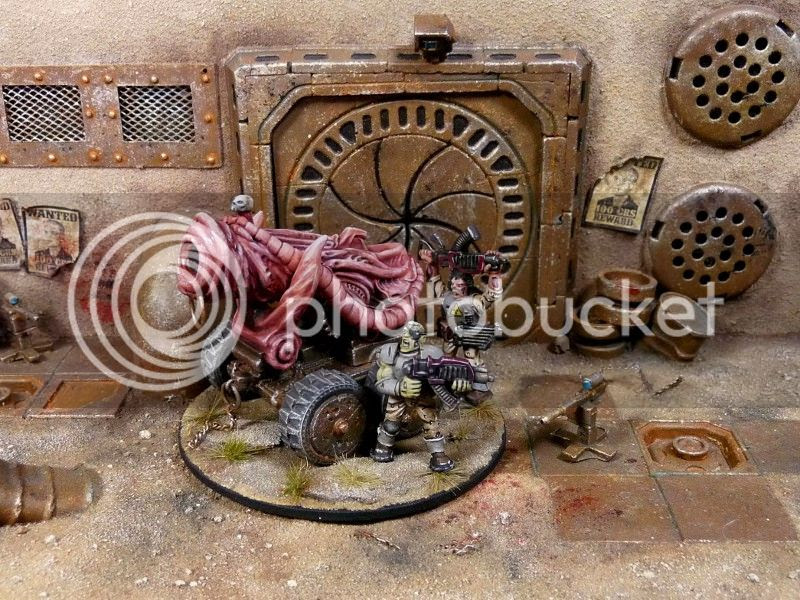 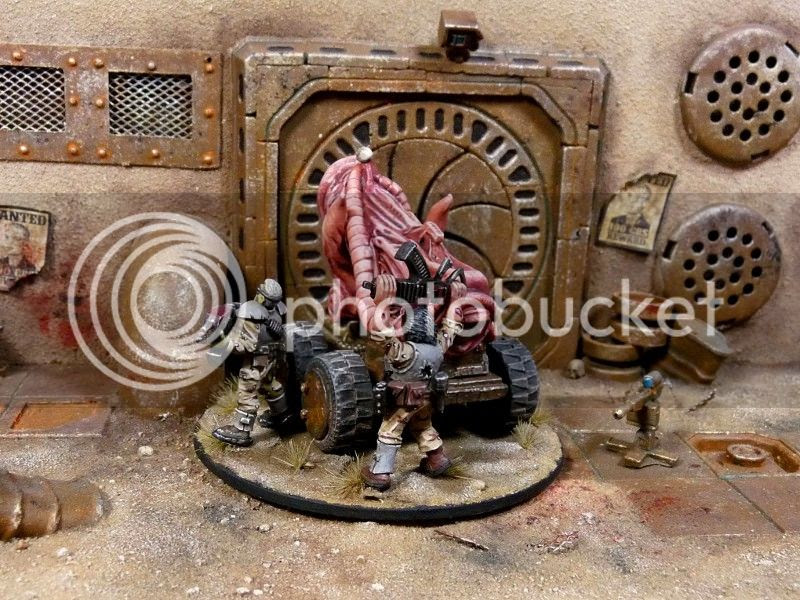 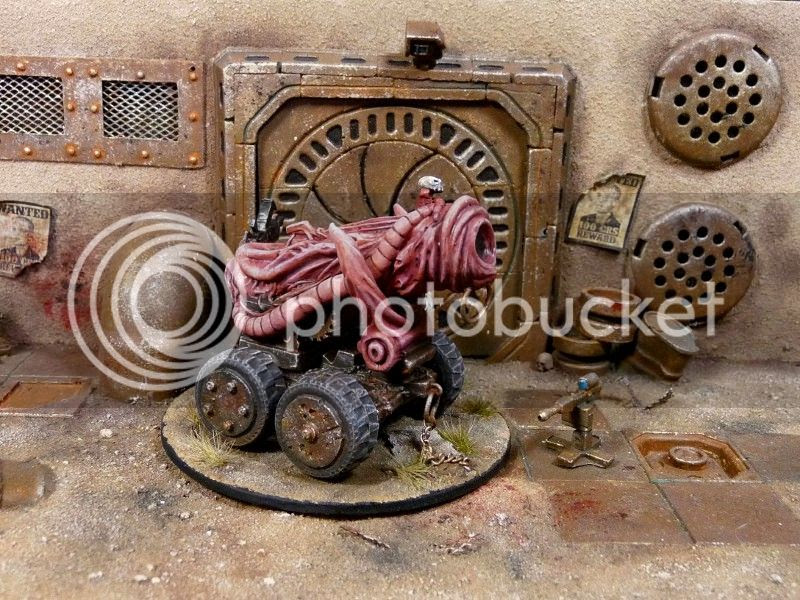 And since there's never enough hobby pr0n here's another something.
Wet and nasty something which should probably come from Ilian (Warzone speaking) but which actually came from Navarro - if you ever had anything in common with Tyranids you should hear about the guy.

Some time ago I was trying to build a drop pod for my pretorian stalkers - according to some unofficial rules we use these guys can start the game deployed behind enemy lines. Since my sculpting-fu is really weak I asked Navarro for some advices about creating alien tissue - there was a cool article about it on Chest of Colors by the way.
So after exchanging some emails he offered to send me his drop pod, which was Santa visiting me in the summer!

What I got was a cast of pod sculpted for Secret Weapons. And it even came painted!
Check this and feed your eyes.
Thank you Nav, thanks a lot! 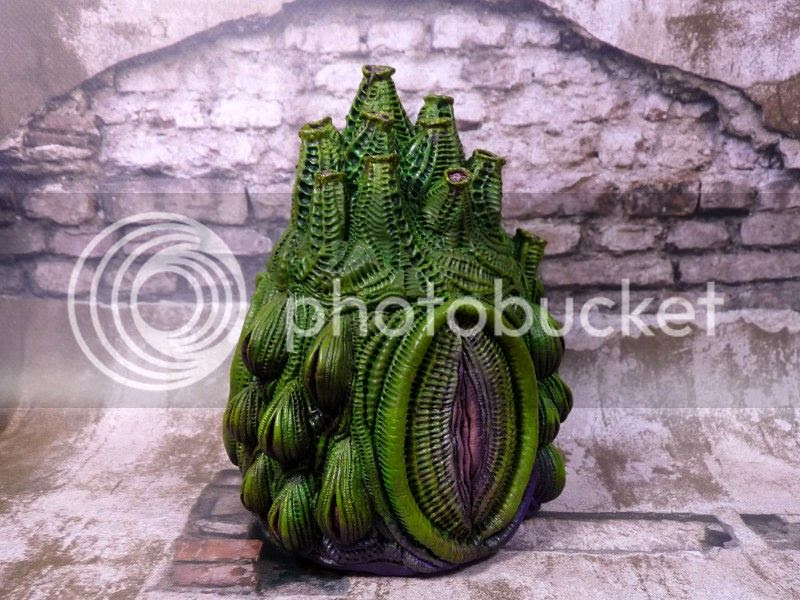 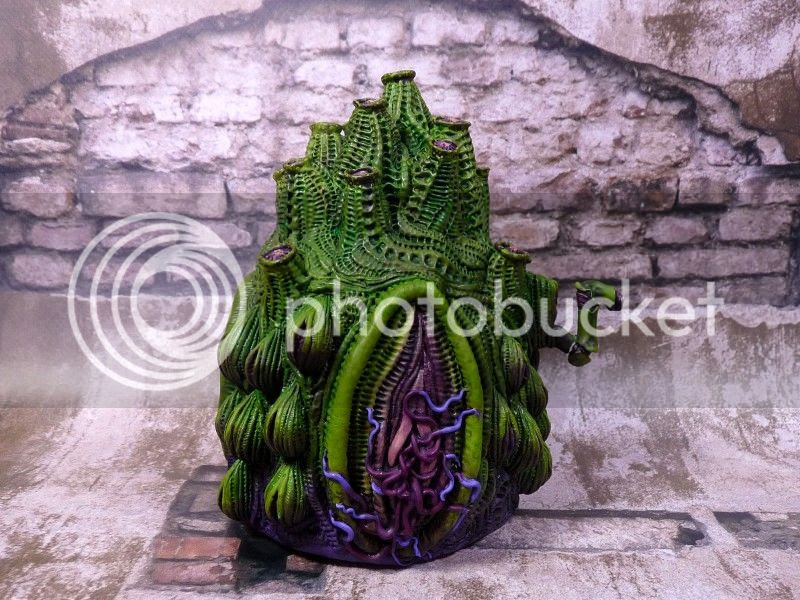 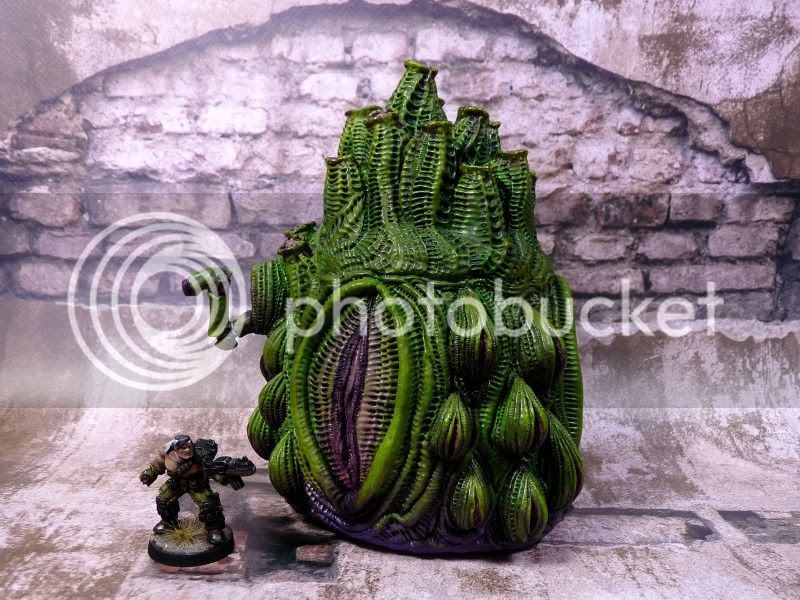 Not much surprise this time - the title has spoiled content of the post: old Warzone Ezoghoul has been marked as painted and placed into the glass case among other Dark Legion's slaves. It's great to see this ugly bastard finished at last!

But first I'd like to share little (and ~18 years old) surprise I got last afternoon.
Old buddy of mine came back from the wedding travel just like 2-3 days ago and dropped in my place with something to take the curse* off the gaming table. At least that's what he texted me. He appeared with Angel of Death model - open top Brotherhood vehicle.

I never was the fan of the model, probably because I was Dark Legion player only (despite the fact I have still unpainted army of Brotherhood). But when I opened the box, put the clumsy pieces together I changed my mind: this thing kinda sums up style of most early Warzone sculpts. It fits really well junk I've been painting recently and should look fucking fine on the battlefield if painted in original colors.
So here it is, another piece of wargaming history. Should probably be stored in some sort of museum, but it found new home among other old timers in my collection. 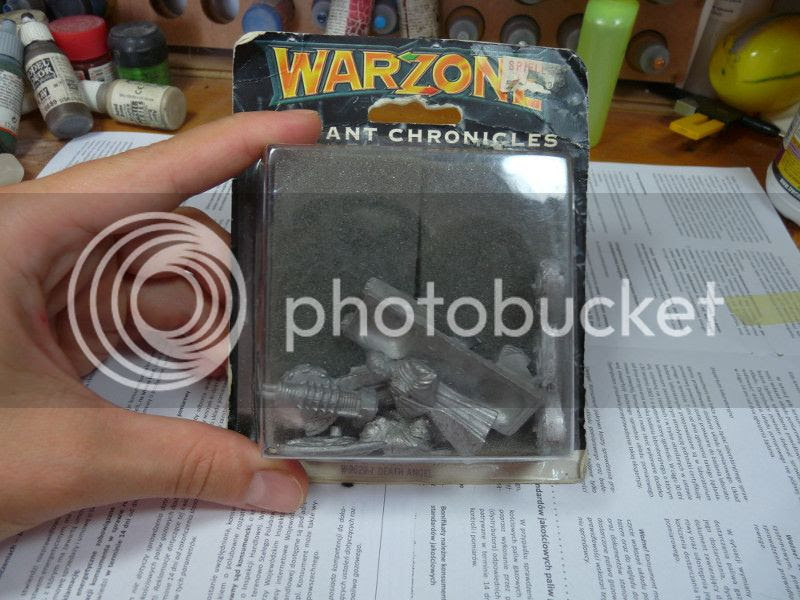 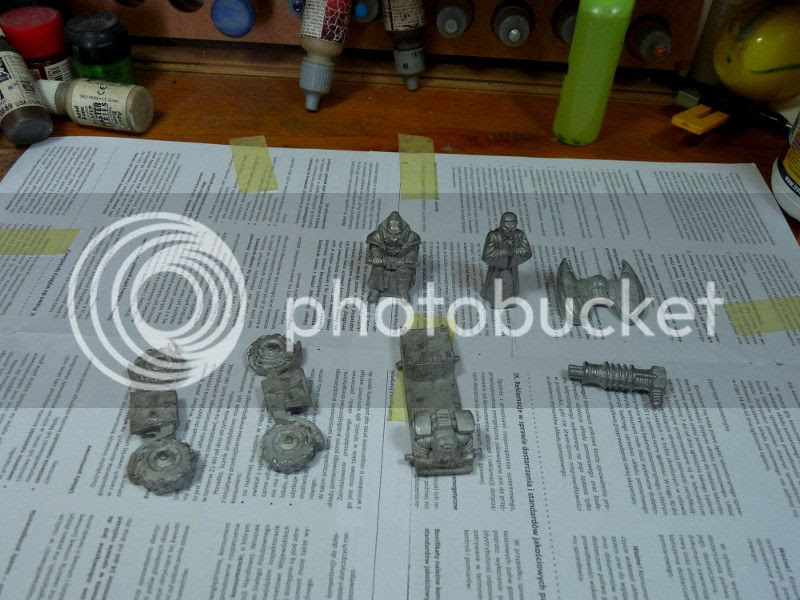 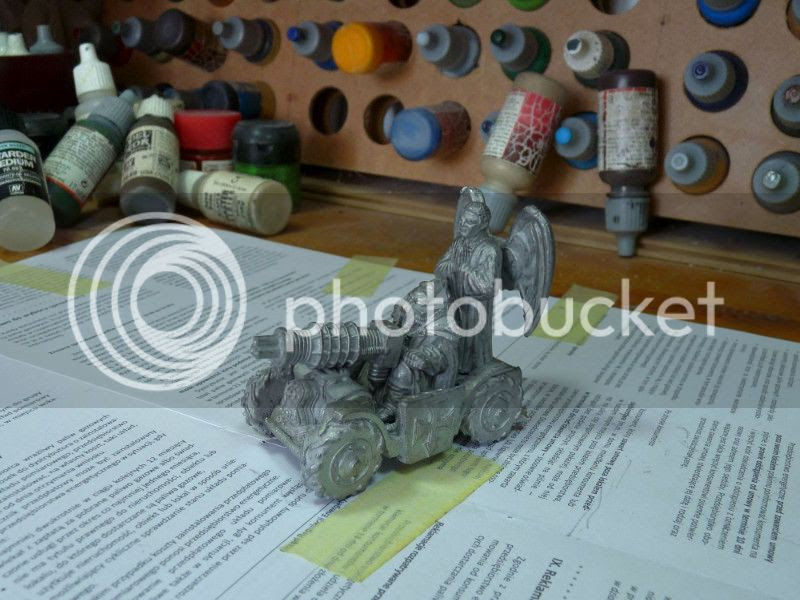 Now we're getting on the topic!
Painting Ezoghoul also created the occasion to finish some undead legionnaires.
These guys were quite unique: they were released in 1999 while original legionnaires are from 1996, they seem to be better sculpted and Cthulhu knows why - there were only 3 models in blister instead of 4 as usually. I'd prefer to see them standing on separate bases but in the end the decision was made to base them together with pony of Algeroth:
I painted them with bright tones (contrasting nicely with Ezoghoul) and besides they are slightly smaller than other deaders so Ezoghoul looks even bigger.

Nice and pleasant work: these two is just some flesh and a gun, so finishing each of corpses takes ~2 easy evenings, with a cold beer in the True Detective in the back (got to find myself other series to play during painting, any suggestions? Sth creepy? Dark future?) 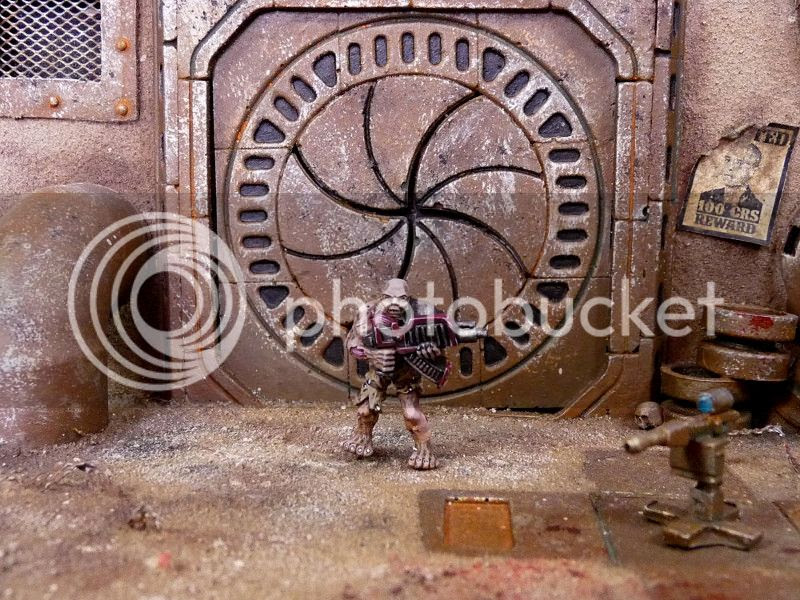 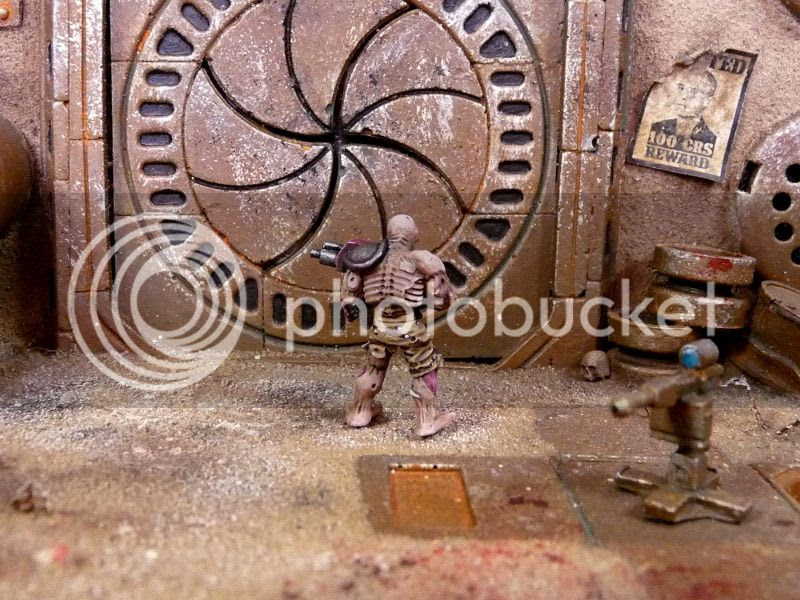 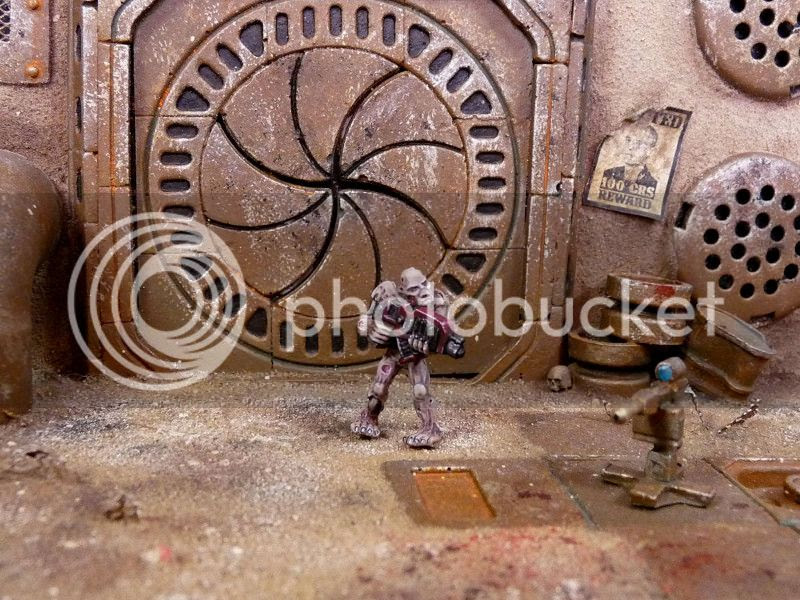 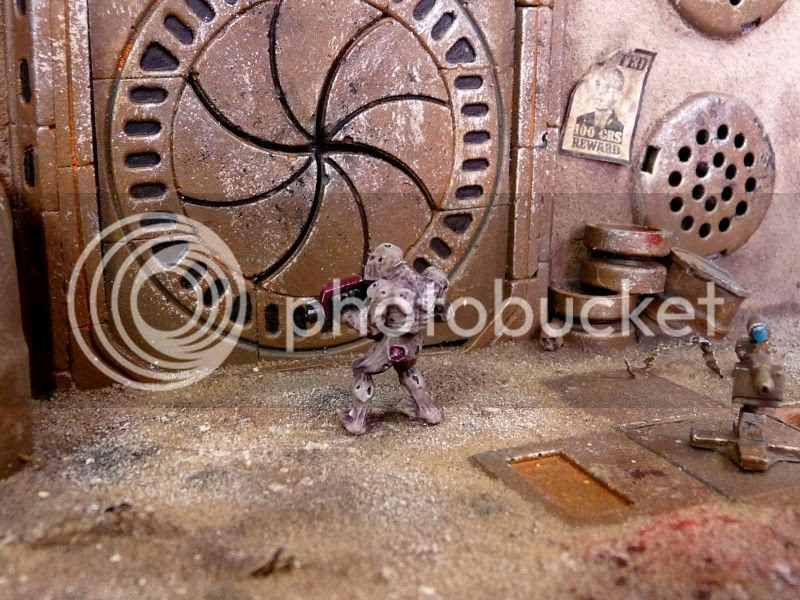 And here's mister superstar.
If I haven't mentioned it before: I am very glad to see it painted after the thing was saved from the junk-tomb. It's a bloody miracle during years of hibernation and 3 movings no parts are missing and the only damage is the barrel (I screwed it with my unskilled, early drilling and therefore replaced with placcy meltagun's) and sword's crossguard.

I was trying to paint it similar to original artwork - with natural colors (if we can say anything in this monster is natural). After taking the pics I can clearly see the highlights should be much stronger - it's necessary if you use heavy supermatt varnish. But I like the final effect a lot - hightlighted properly or not and not going to change it.

On first pics the beast is standing alone but later you can see it with undead handlers / pooptakers (Algeroth likes to have his grass clean). We have planned the game for tomorrow night so we will see if Ezoghoul is anything more than just bullet magnet :) 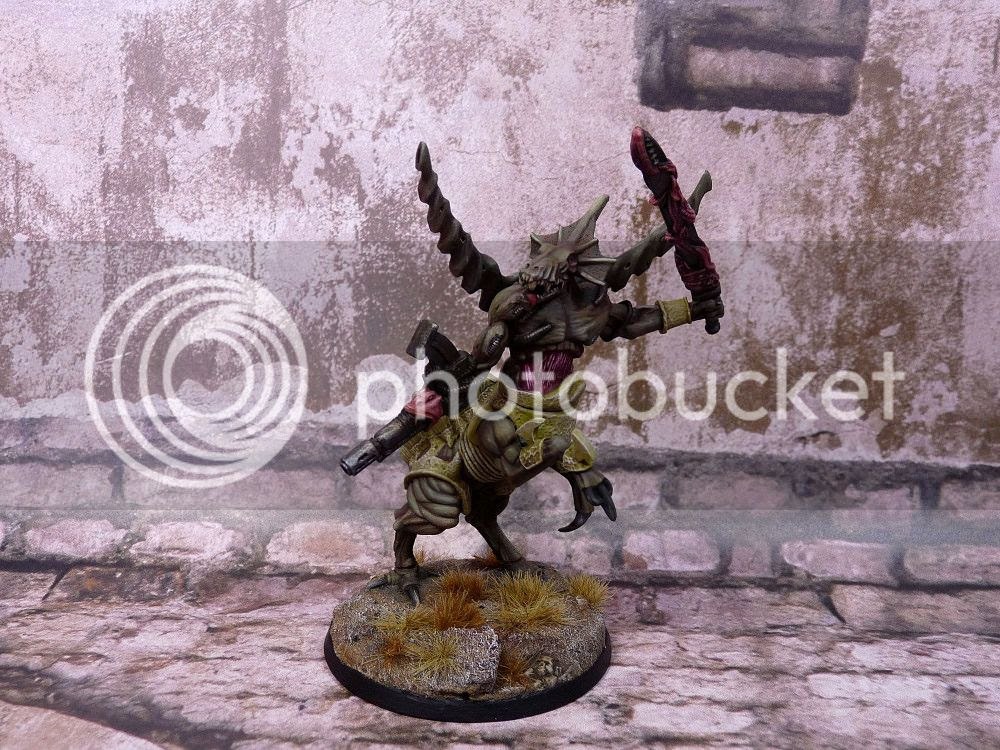 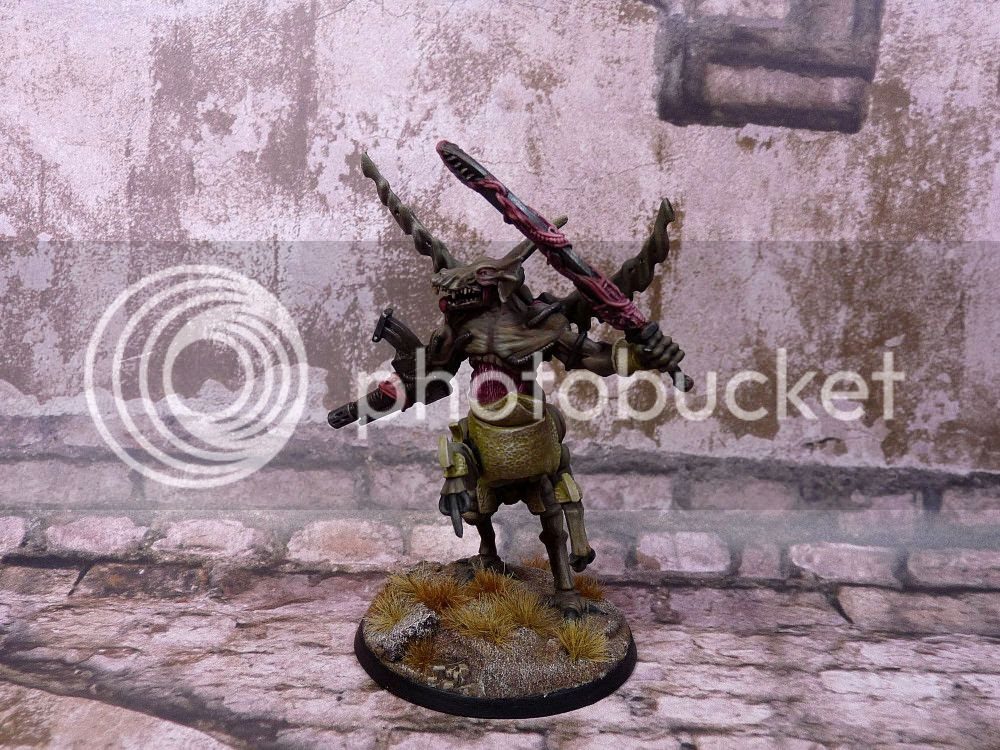 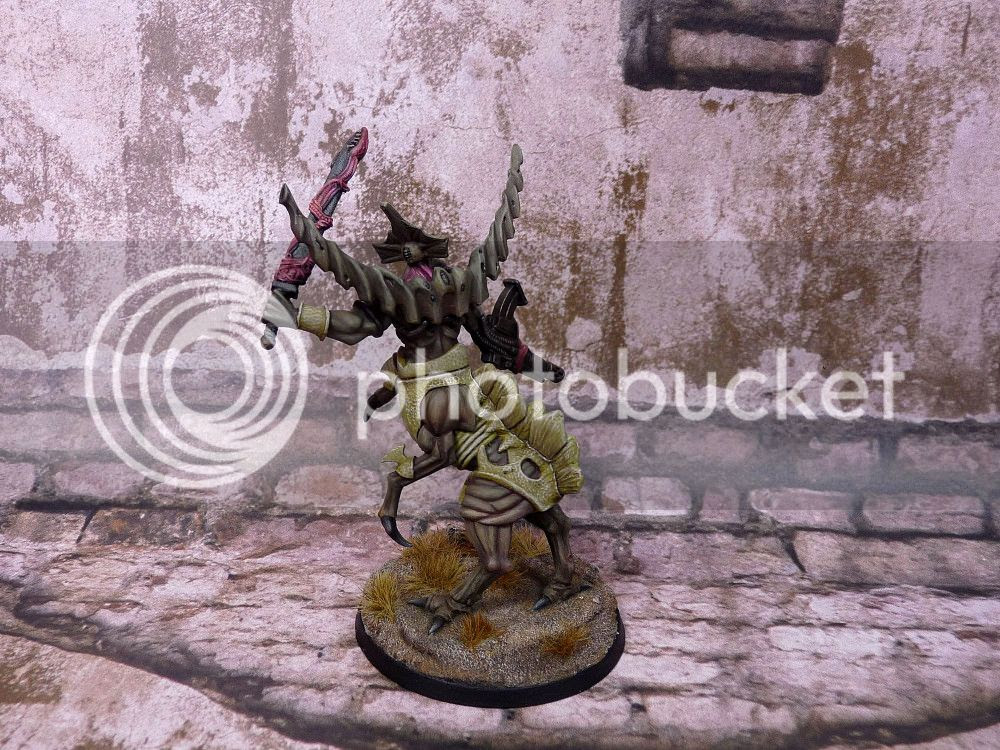 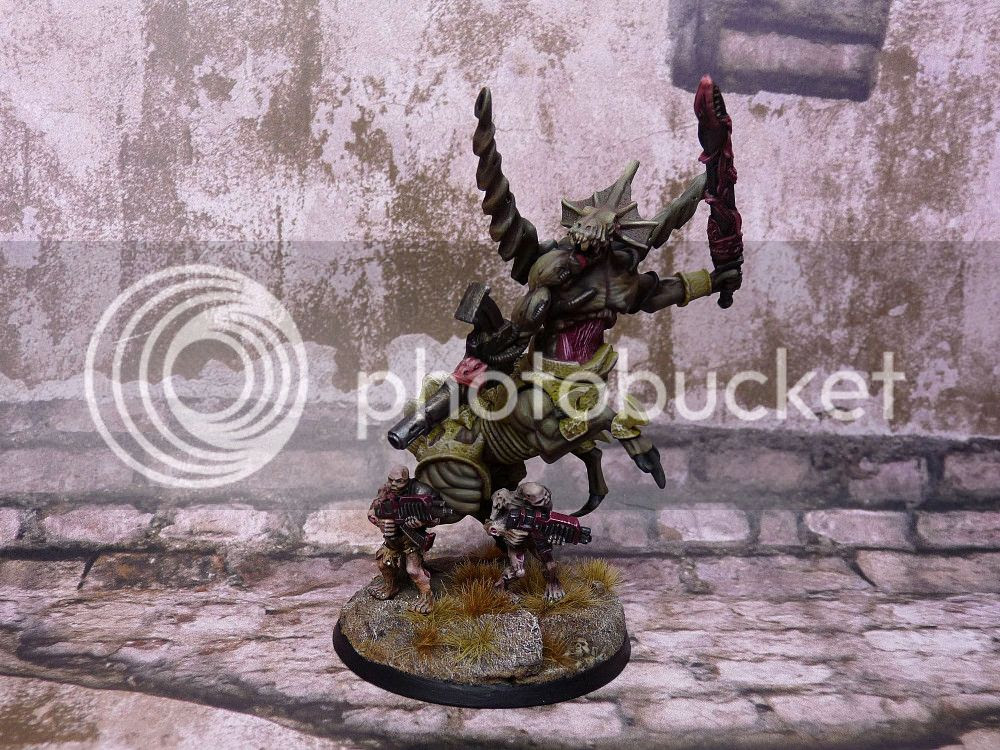 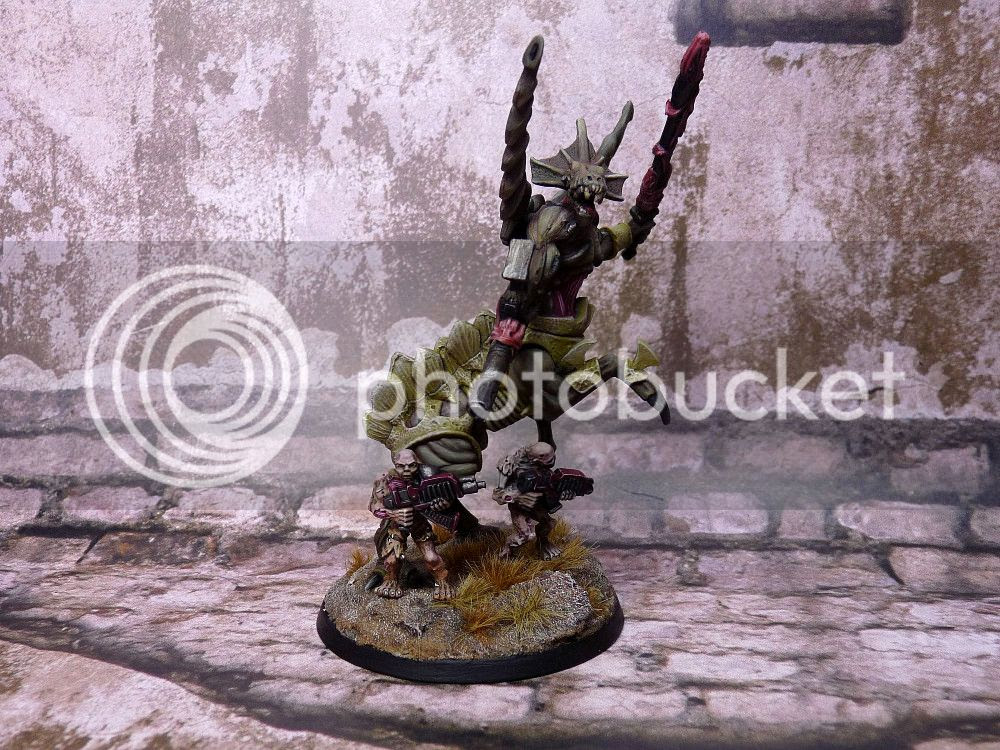 *oh yes, curses actually work, haven't realised how to dispel them yet though.
Posted by demi_morgana at 12:22 PM 2 comments: