Last Saturday night something happened.
Something BIG. So big I had to take pictures during the event so no one can say I am lying.
We played Warzone.
WARZONE 1.0!

Only base, unbalanced rules and units!
Last time we played that thing was like 15 years ago? Back then the battlefield was piece of carpet and most of terrain features were made of boxes covered with (mostly green) rag. As you can see our gaming conditions developed slightly since that ^^

Anyway the battle was quick, test 500 pts combat between forces of Algeroth and Capitol patrol. It was lots of fun and like after 15 mins since the start I recalled all those stupid rules and overboosted characters.
Some pics were taken but I definitely need another lamp or two exactly over the battlefield: camera's flash makes most of them just overburnt and further GIMP manpulation cannot fix it. I also think I will cover the table with layer of very diluted pva mixed with olive pigment so the surface is less reflective.

So here's the field of glory.
In the back left - my bike (now I can see these shiny bits make me much more visible while riding in the night), in the back right: 2/3 of my oponent. 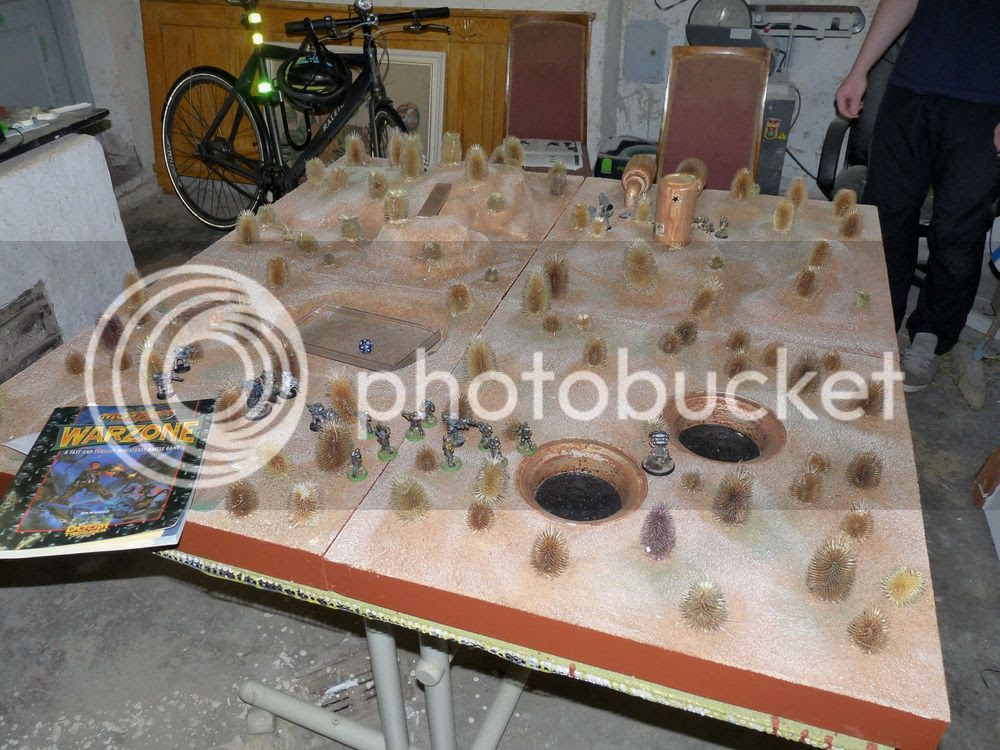 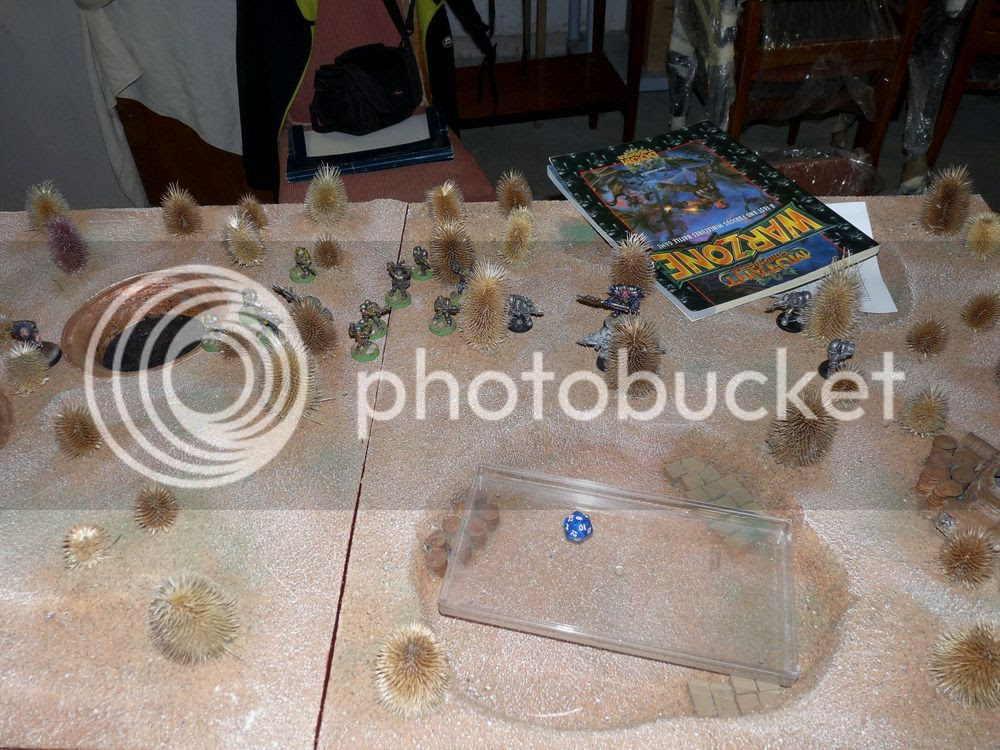 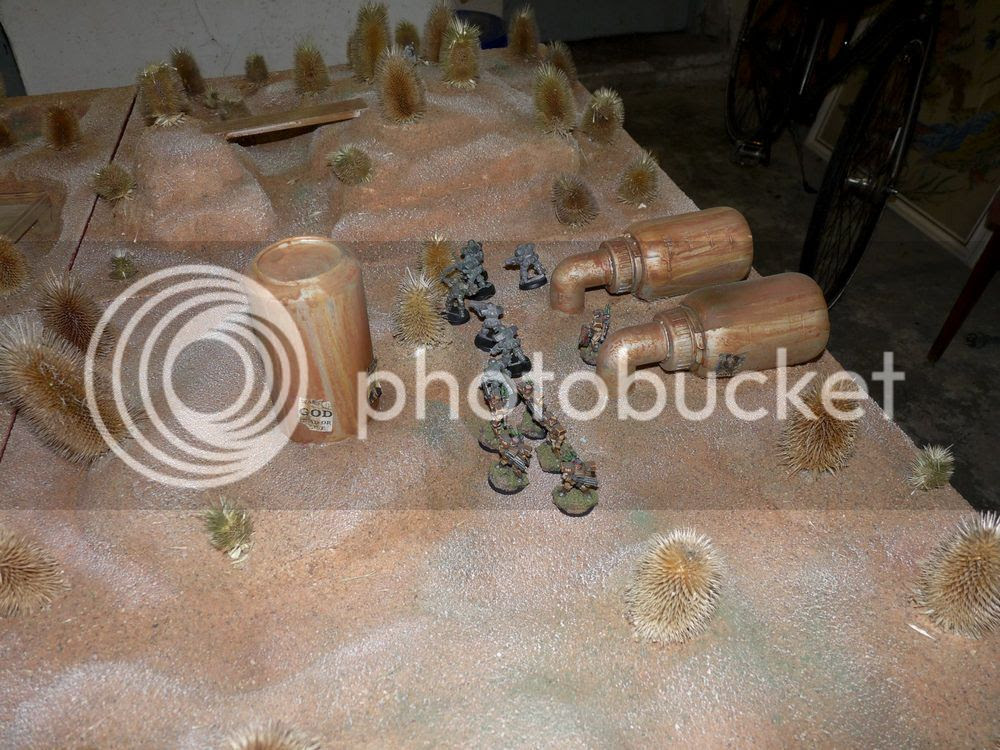 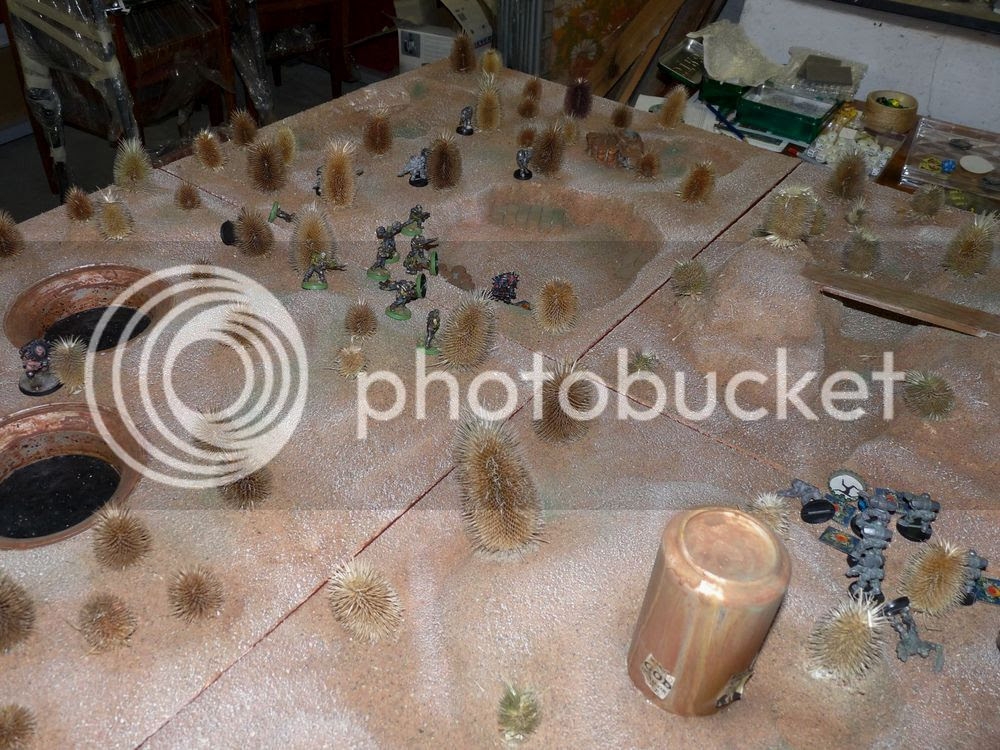 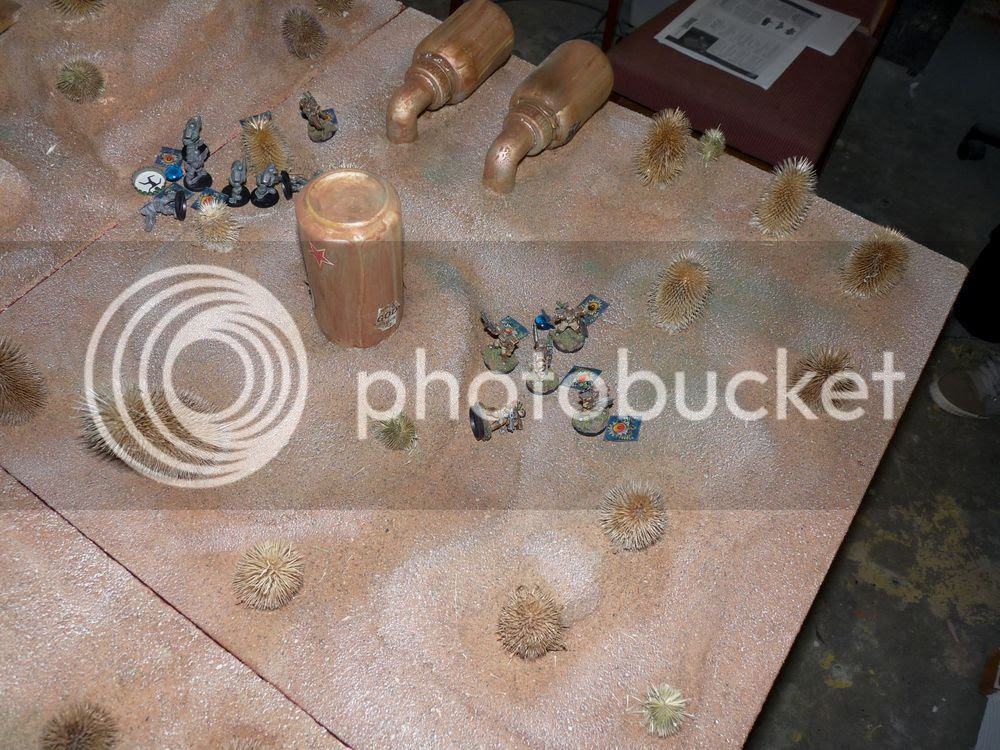 Capitol forces taking defensive positions: all those motherlovers are hidind and the hero controlling the hill is on overwatch. That sneaky bastard called airstrike over my forces so several zombies and necromutant leader were sent back to Algeroth. 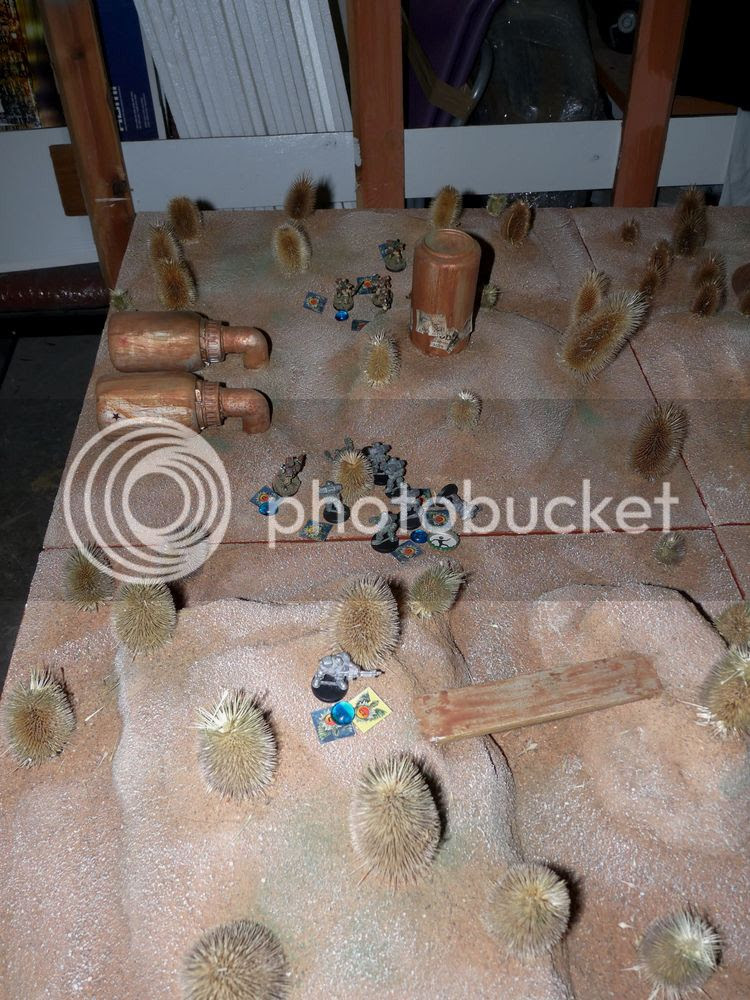 Aerial view from the necrodrone. 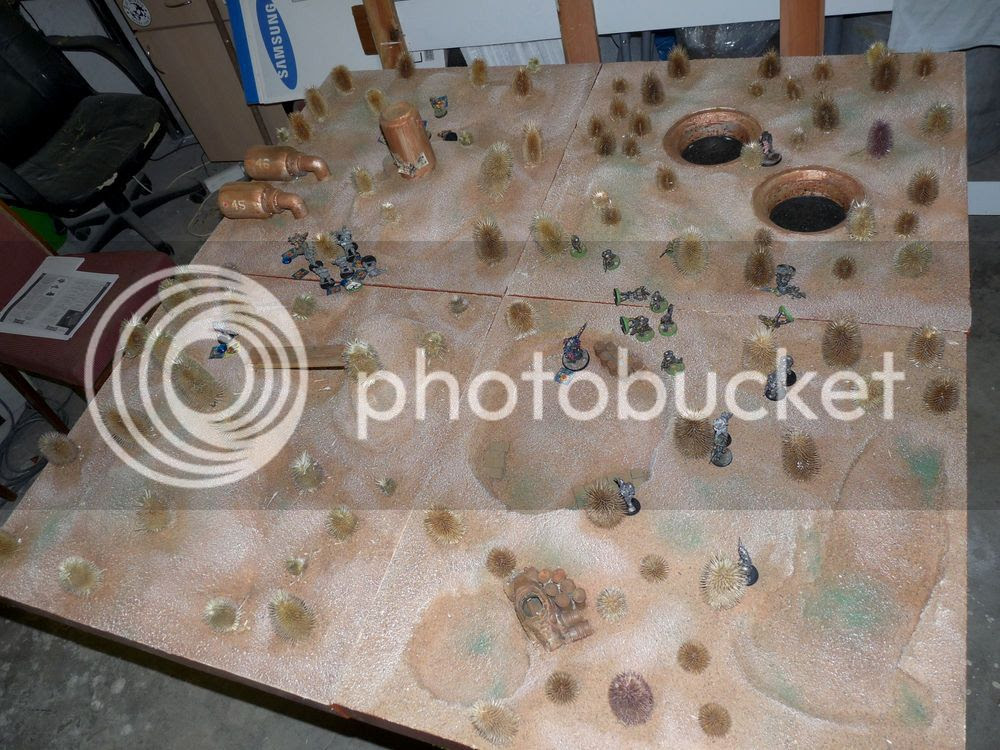 My turn to play nasty!
Since I really enjoy playing WYSISYG my nepharite was melee monster (too bad that goddamn Sunset Striker badass wasn't much worse...) so in the following turn he casted compression spell, launched from the trench into infantry group killing 3 soliders (and making them run like bitches) and wounding Strikers hero and that was it.
On that moment  I didn't see brutal retaliation coming... 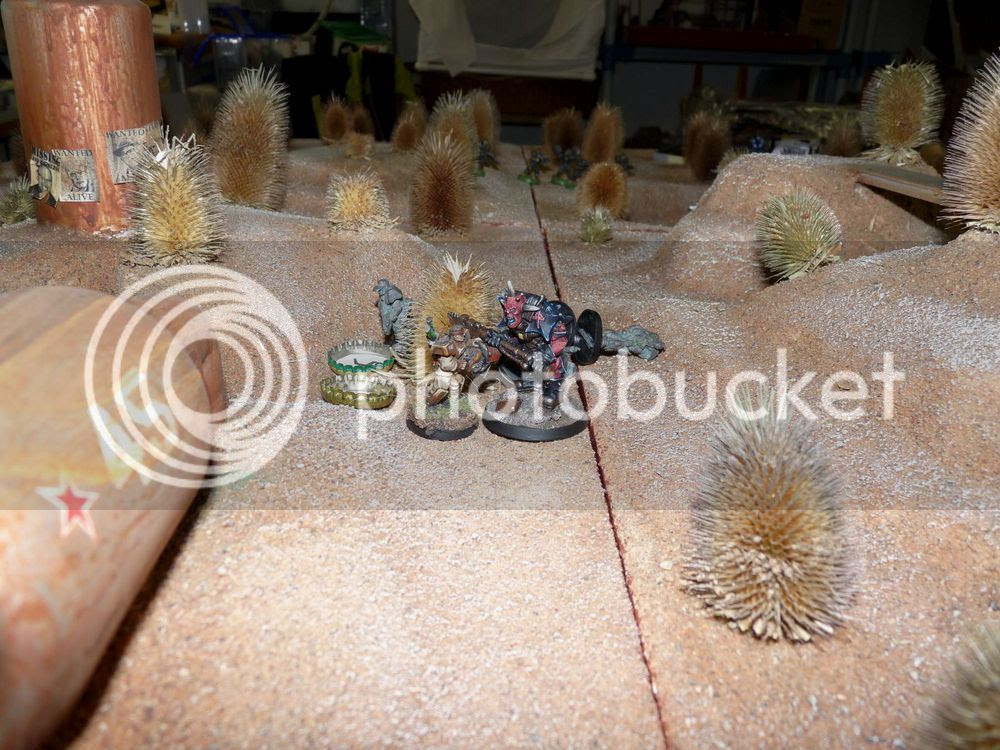 Necromutants commando advancing to take down hero from the hill:
that fucker was calling bombardment every turn destroying my precious zombies.
Didn't he know how expensive re-animating fluid really was?!?!?!? 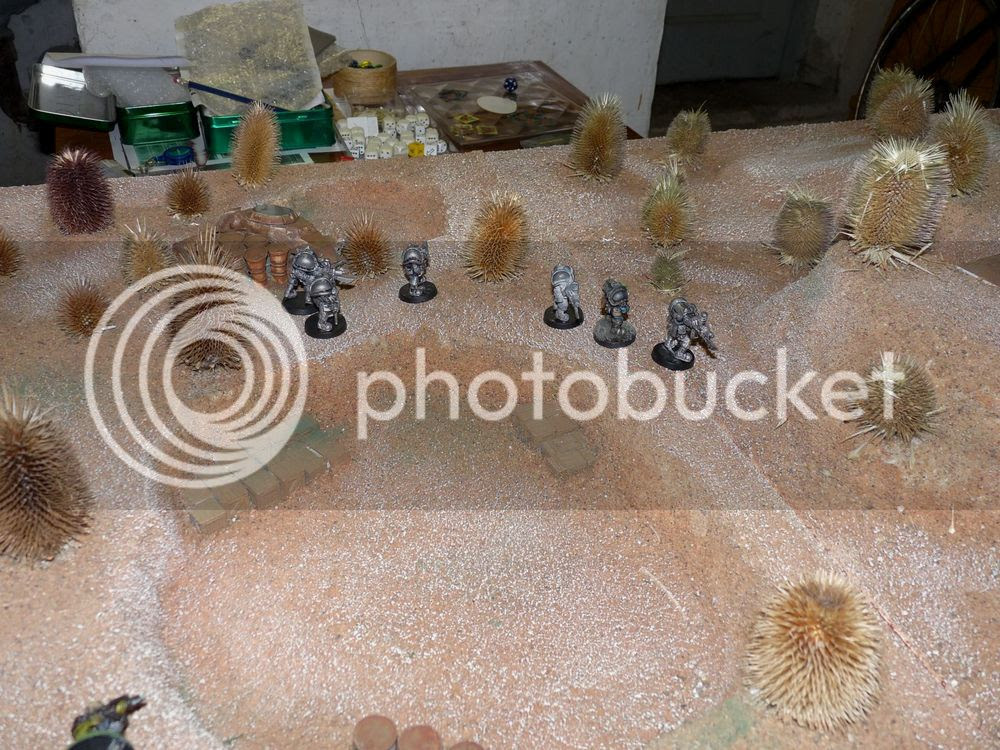 Like down below:
direct hit and 4 more corpses cannot carry their guns anymore. 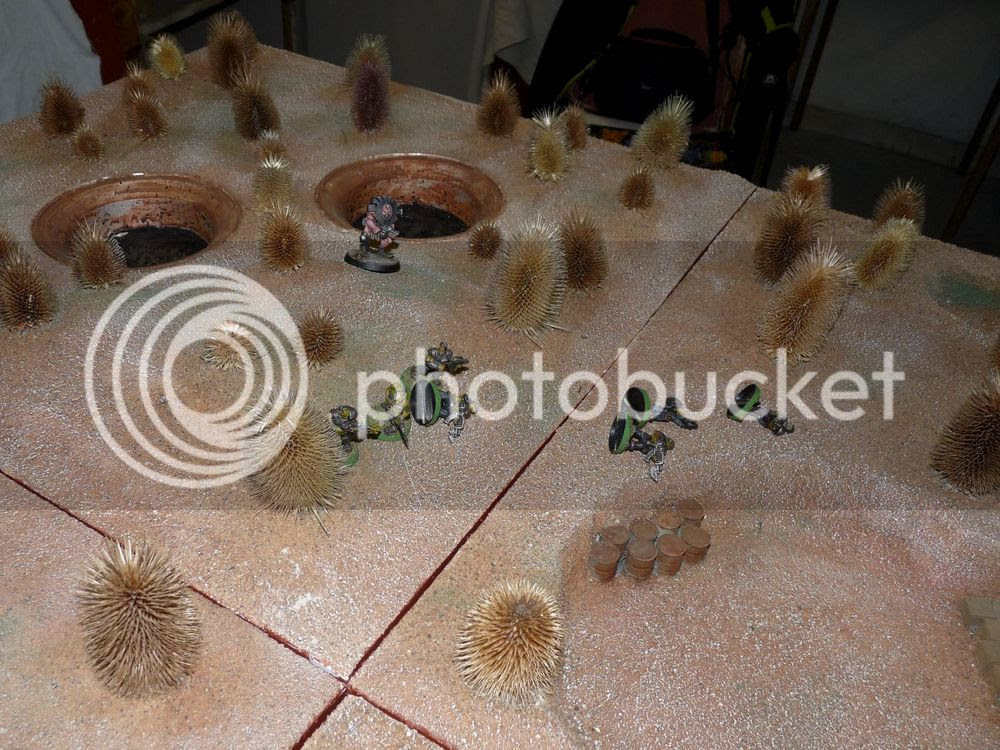 On the oppisite side of the battlefield Strikers are getting closer to deal with remaining legionnaires and immaculate fury - didn't expect that model and not nepharite might survive the battle. Ooops! 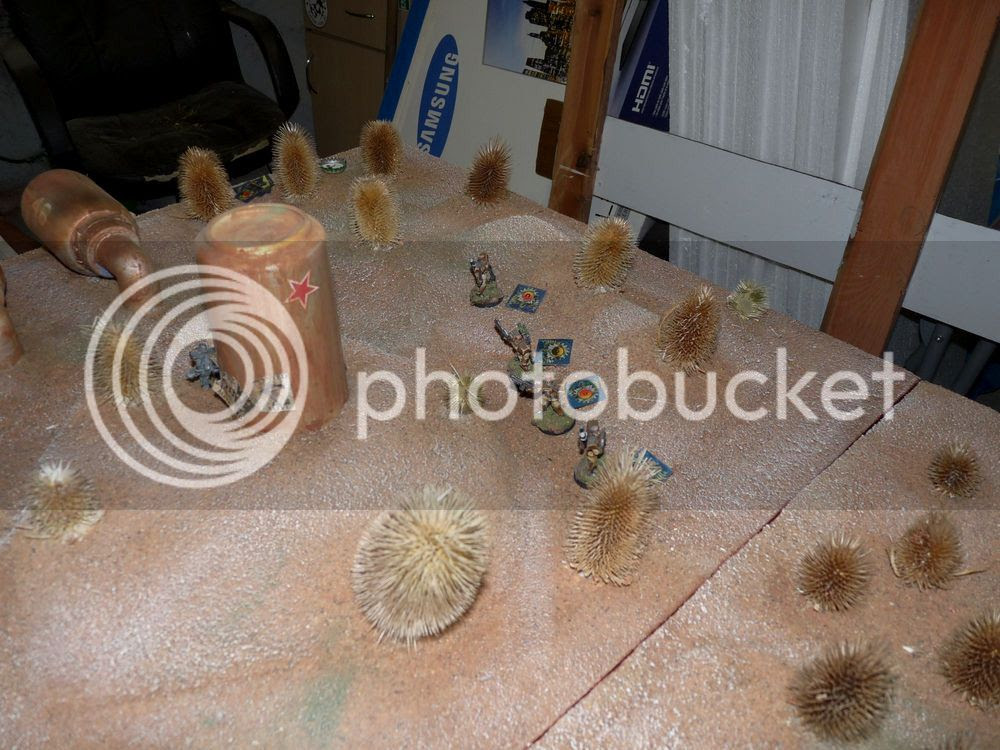 Another round of epic duel:
Striker is still alive and spawn of Algeroth got 2 wounds! 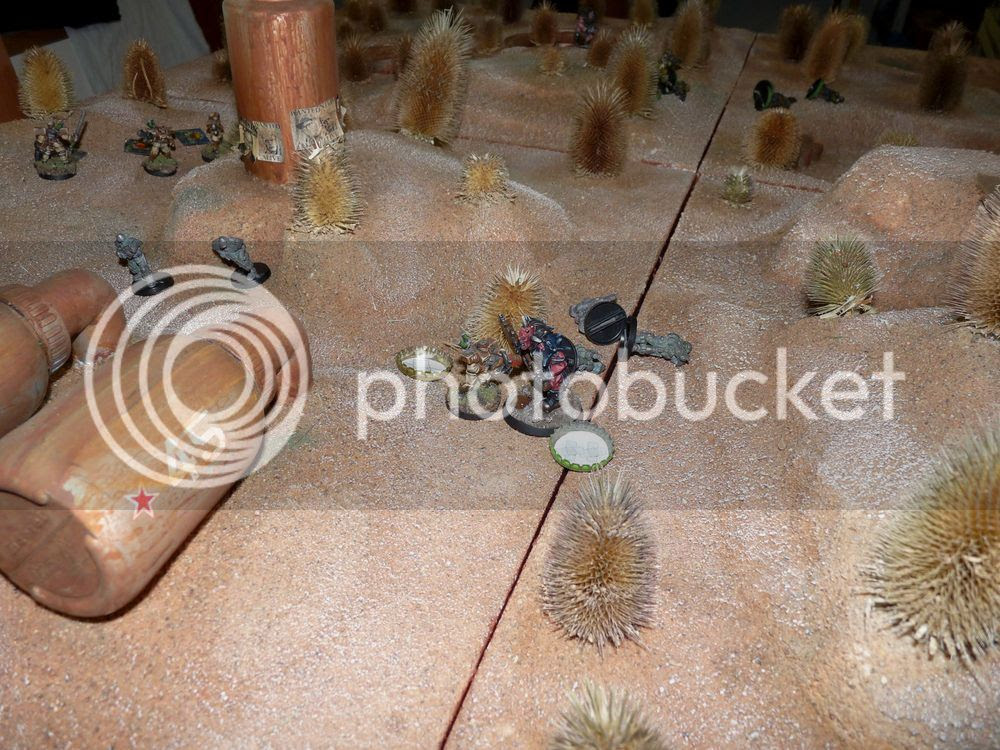 Good news is necromutants managed to take down Capitol hero even though he was wearing armoured skin implant! Bad news is in the back: nepharite is down... 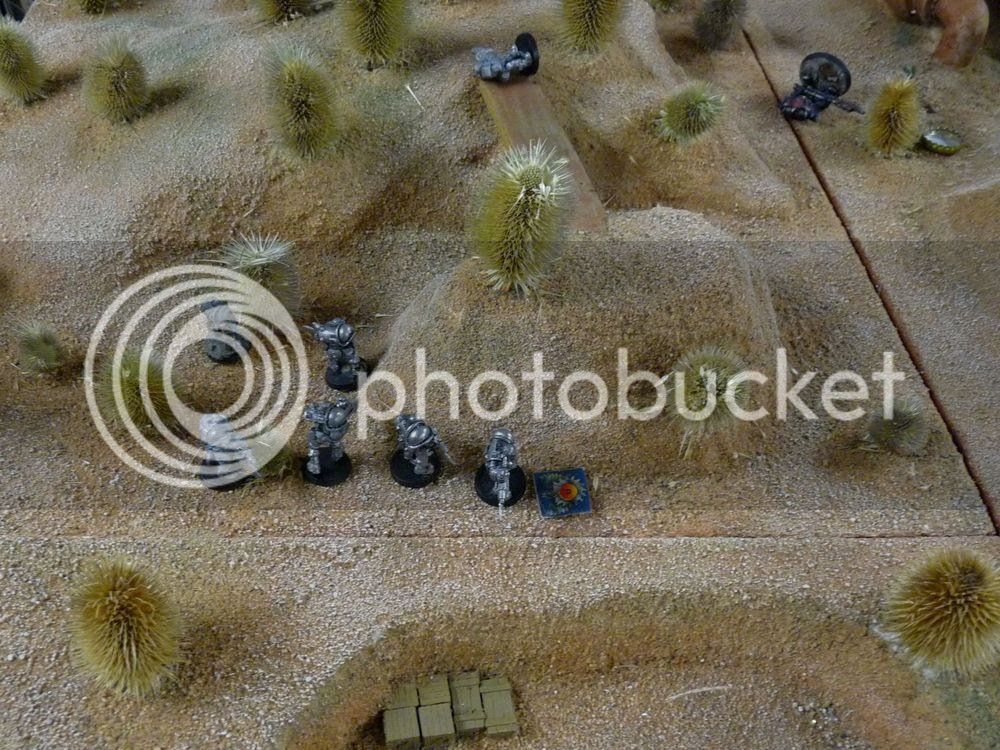 Immaculate fury is taking command over remaining zombies and preparing for the Sunset Strikers assault. Necromutants are trying to get some tigger time as well - boosted by previous success. 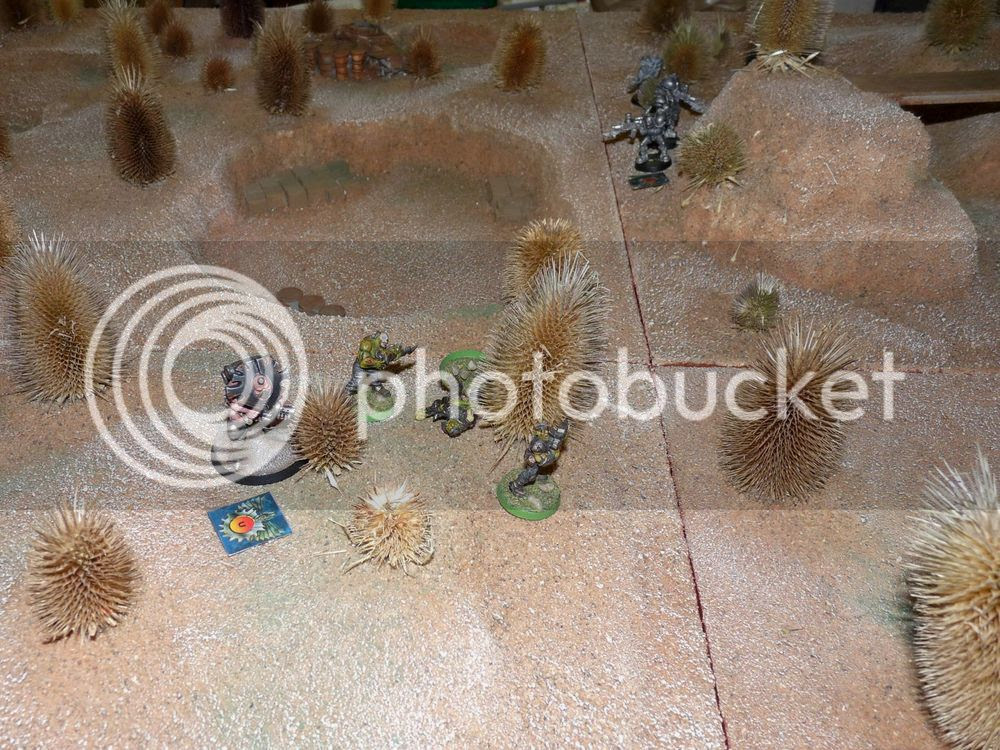 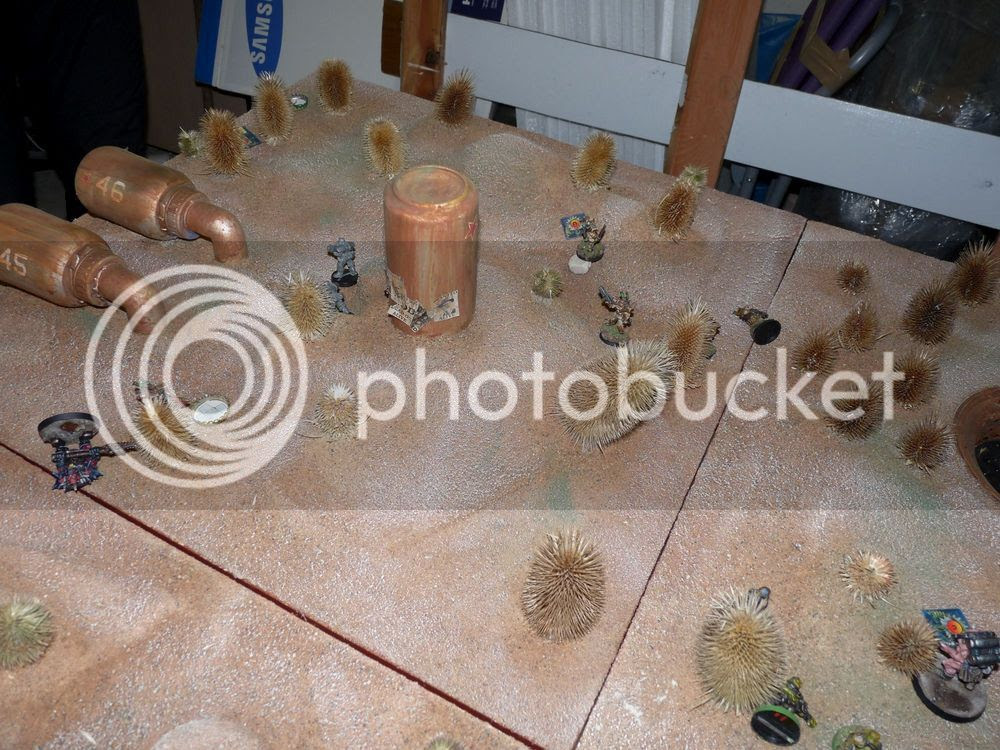 Another snapshot from the necrodrone:
legionnaires were taking down by well aimed Strikers' shots. Half of necromutants squad was burnt to stinky ashes by Strikers hero - who earned piece of lead between ears seconds later. Once again immaculate fury proves itself worthy bearing badge of badass of the match! 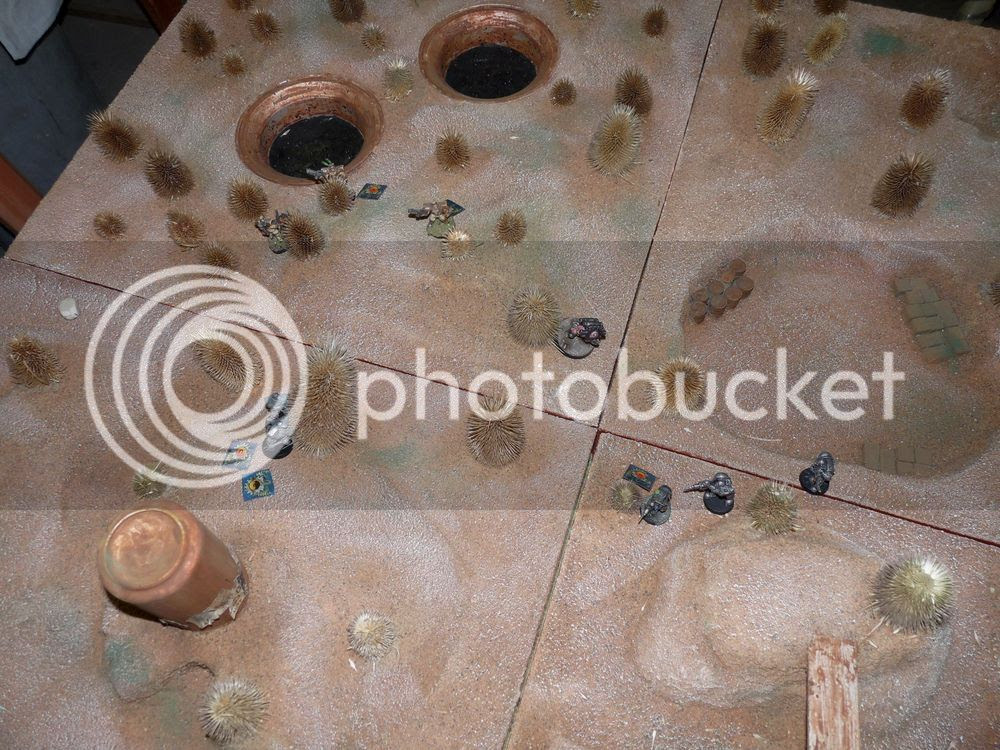 And the final pictures:
the last Sunset Striker looked at advancing enemy and since his charge range was shorter than Legion's ranged weapons, he decided turn back (with class of course) and easily, not running at all, leave the desert to report what happened. 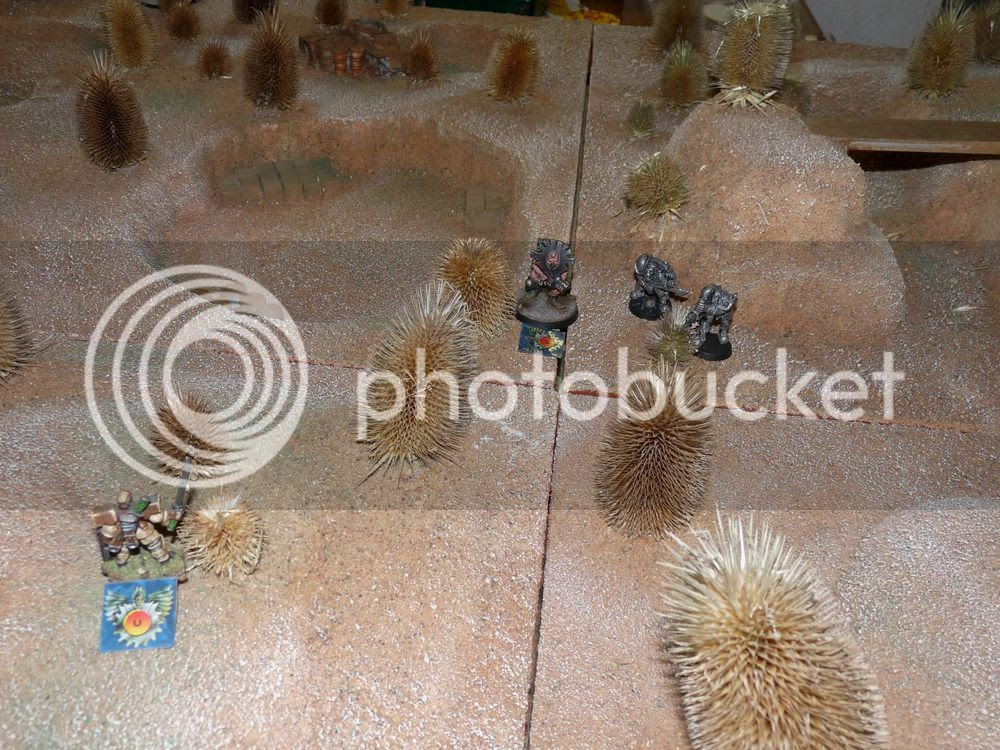 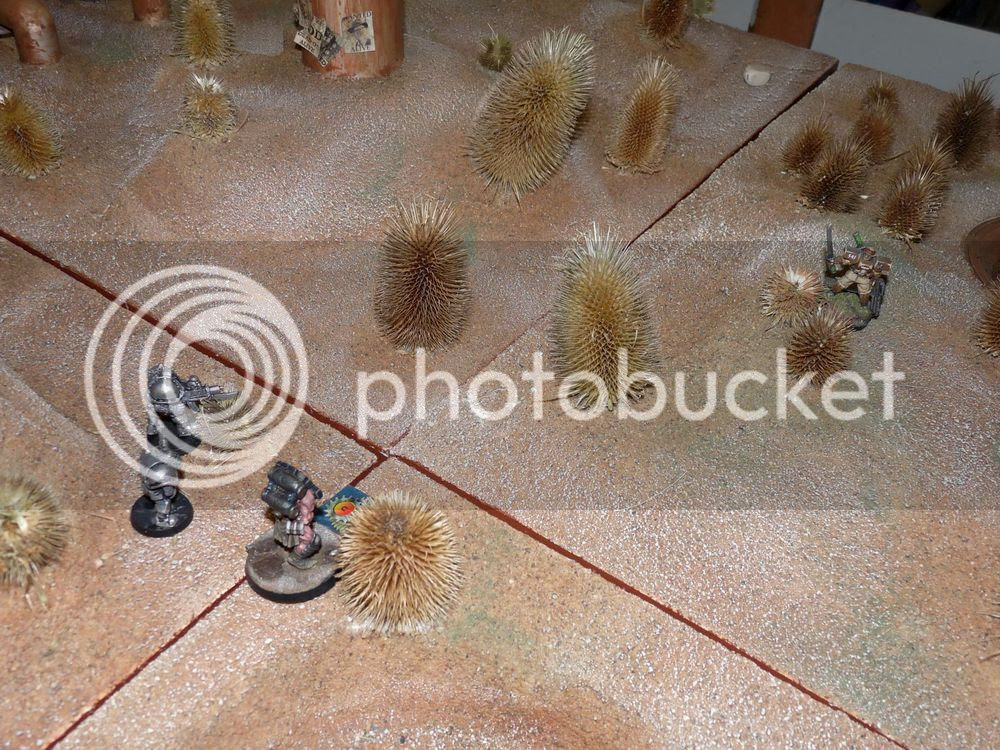 Dessert time!
I've finally managed to finish one of the first models purchased ever: these were immaculate fury and Valpurgius (that one was painted by Dead Dogg - I didn't manage to deal with that piece despite several attempts).
I was always sure the model was cool but sadly it's just best of all 4 furies released - apart from sentimental value it's just what you see. And of course it survived the last game. 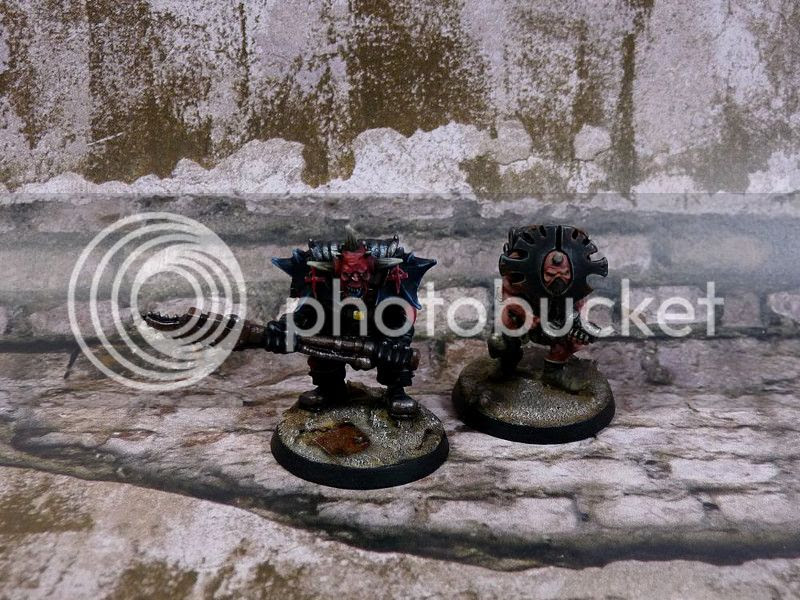 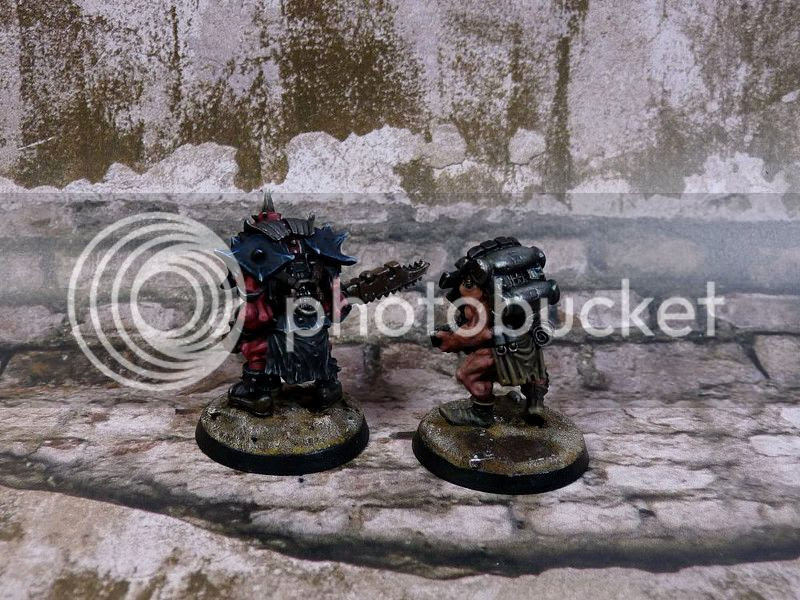 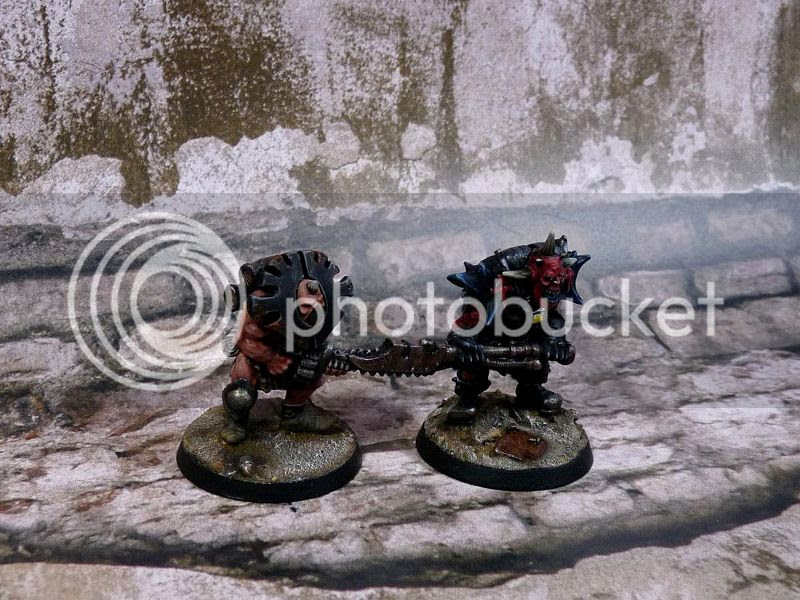 Pyrkon is over so we can go back to the blogging routine.
Just before going to the event I finished oldie tekron model. As it was written before those old, ugly farts can really appreciate a bit of attention and fresh paint.
Sculpt itself is just damn ugly but after the painting was done it was immediately promoted to badass boss for the campaign game. 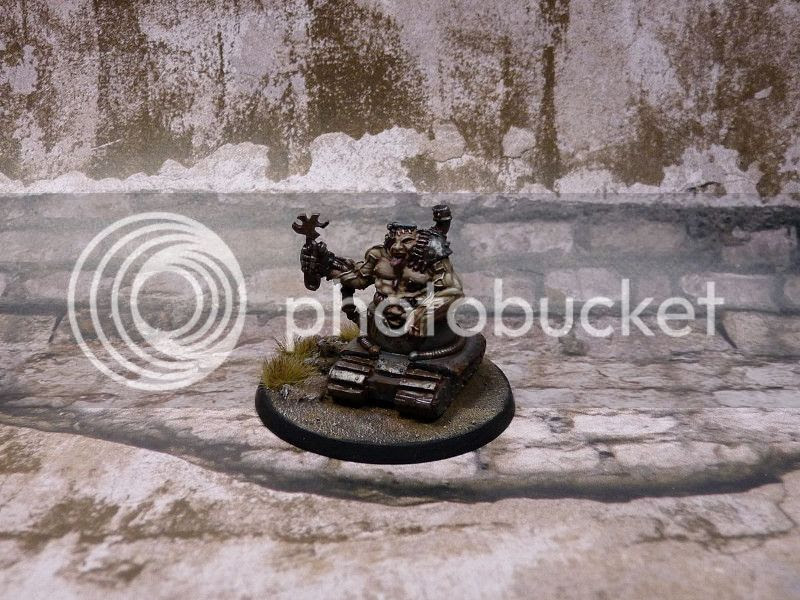 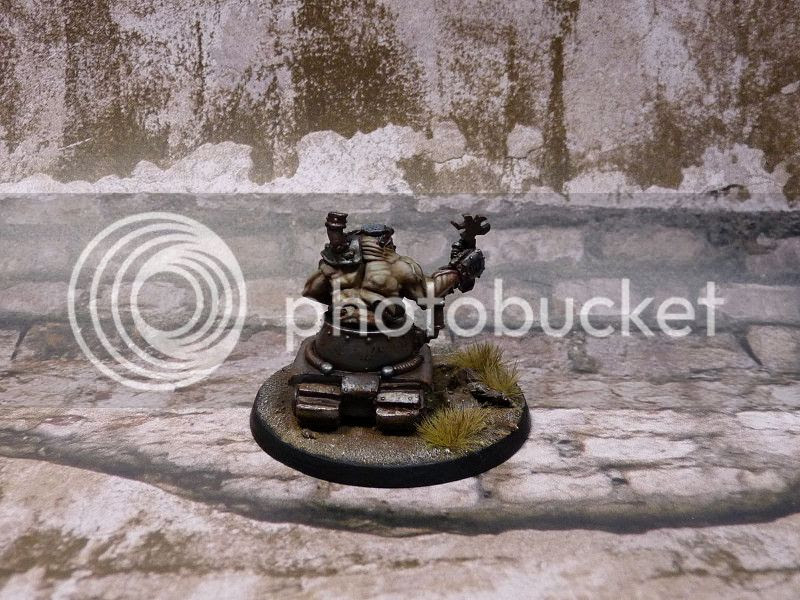 No boss, no matter how bad, can operate without trusty servants:
especially master of necrotechnology and Dark Harmony.
I have most of oldie Warzone zombies but recently got 2 missing ones: kadavers. I've never have occasion to field them when I was still into the game - stats amd rules were nothing special and models are just crap. Horrid even for my classics standard. But such animated corpses they fit tekron quite well. Besides they are quite funny: one with brain exposed and other with skin tissue ripped off the back. Necro-funny ^^
Also I also tried new green / brown camo pattern but definitely prefer khaki (will use it on necromutants squad). 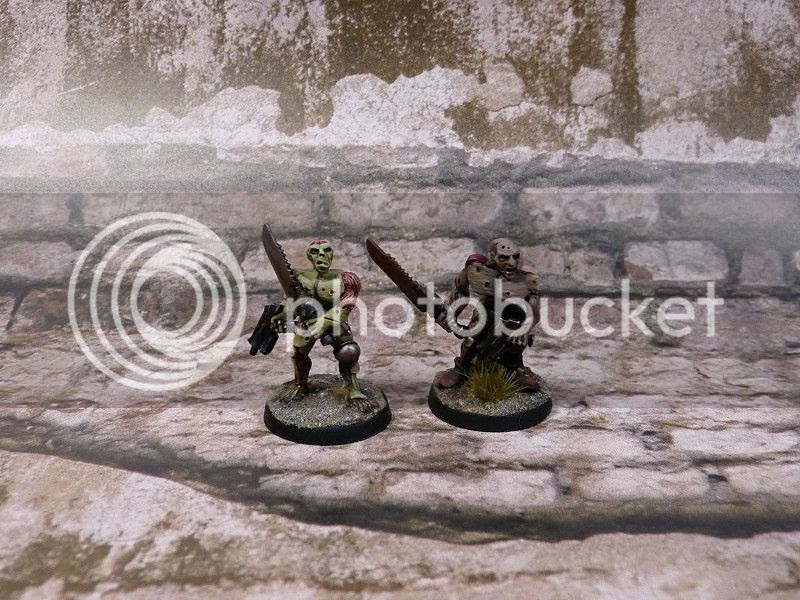 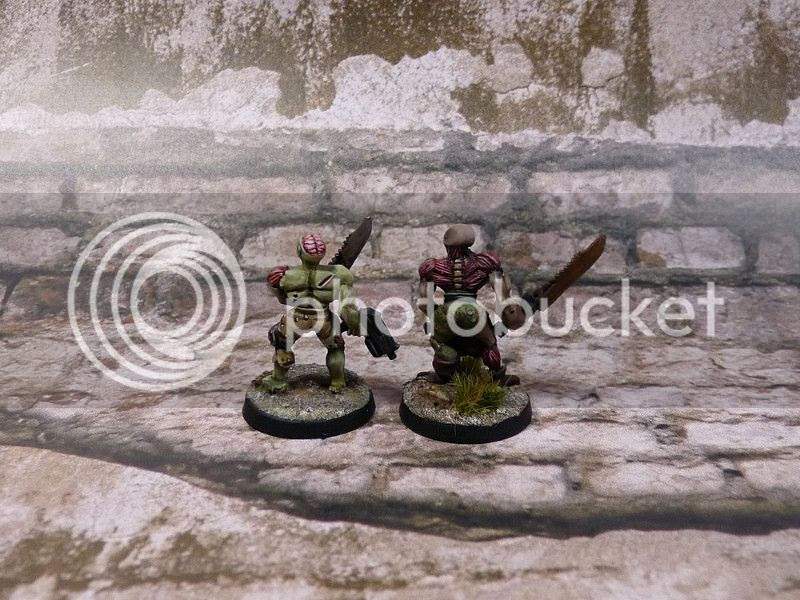 And the family picture. 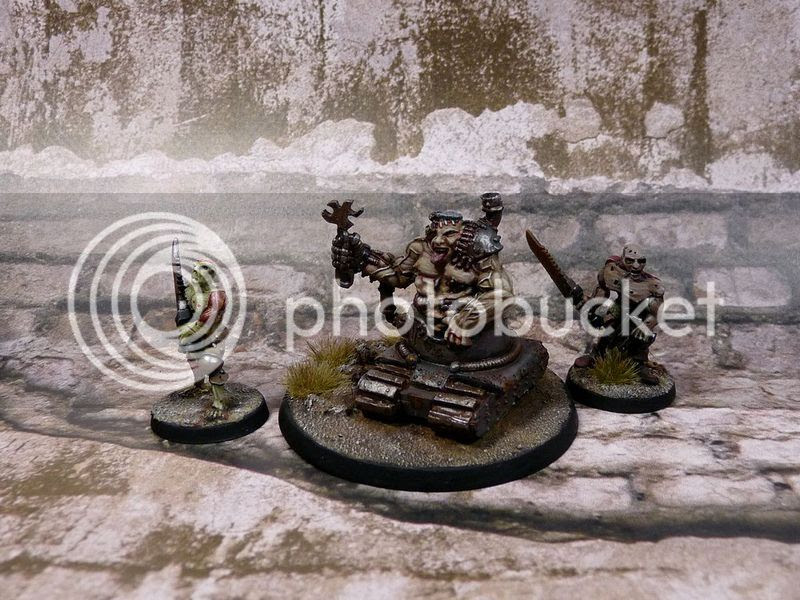 Oh, and the last thing about Pyrkon painting contest: Sławol did just great job and managed to take great pics of all pieces displayed on the contest: if I remember correctly there were 65 entries!
Nurgle daemon beast (whatever) was just stunning - as well as others - check all the models.
Of course there was also group shot ov da winnerz: try to quess which of them is good ol' always positive as hell Demi ^^
Thanks all for great fun: organizers, judges and painters who dragged their precious toys to the spot. Hope to see at least some of them in 2016. 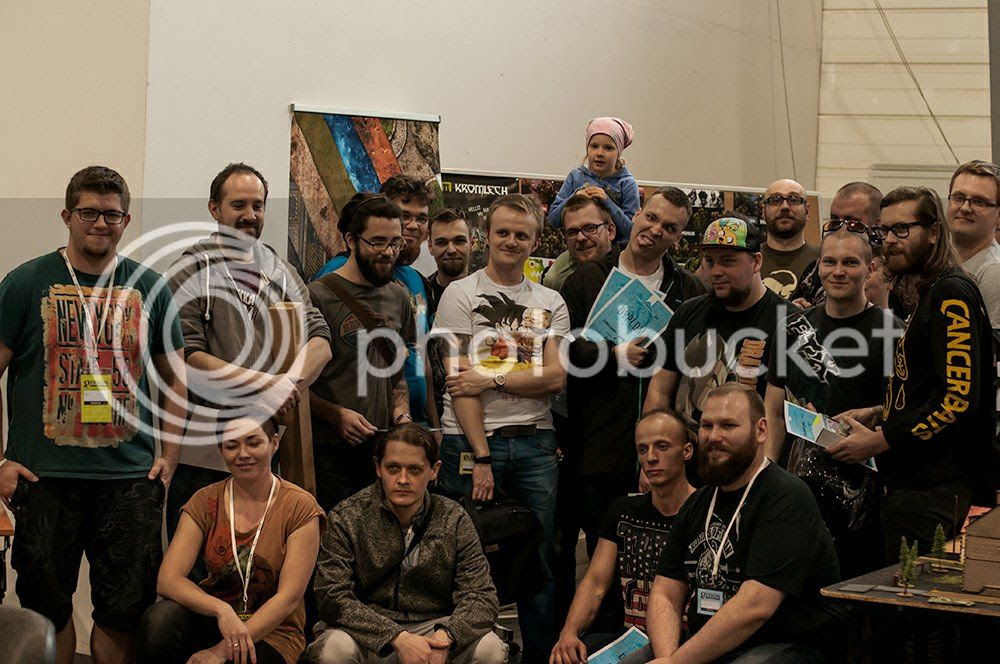