Recently I came back to painting oldie Undead models - those from the very beginning of my Warhammer adventure (mid 90's that is).
While digging through the remains of the collection lots of warm memories woke up in my corrupted brain. Warm enough to make me start another long distance painting project.

Anyway after paitning Nagash I though it would be nice to see fully painted army of the restless dead once again especially after browsing oldie Undead army book.
The big plan is to bring 2500 pts army, based on tournament rules (no special characters, 50 pts magic items limit etc) to existence.
First thought was to give it shape and colors of Undead force from Dark Omen game (which was supercool), but I think I'll rather try something more colorful, something more into original Undead army book.

And yeah, I want to raise Undead force, not Vampire Counts, which means there'll be carrions, mummies and hopefully chariots. I've never fielded unit of mummies but always loved the idea of these shambling, flammable monstrocities.
And the pyramid standing in the middle of "medieval" Heroes of Might and Magic 2 Necromancer Town was sooo damn funny!

So without further introduction here's the basic shape of what I am hoping to see in the end.
Hoping, because part of models is yet to be hunted.
Final shape of the army surely will be evolving during the progress but here's the starting list, including magic gizmos:

And for good start I managed to paint pair of oldie carrions (90 points in total!).
I still have mixed feelings about this unit: gamewise is't ok, the drawing in WFRP book is cool but as for the sculpt - you gotta love old/middlehammer to field it I guess. Apparently do so...
I am still not sure about ghost riders wearing bright rags, but I think it provides nice contrast to rather boring mounts: 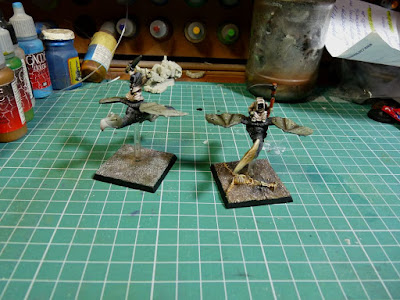 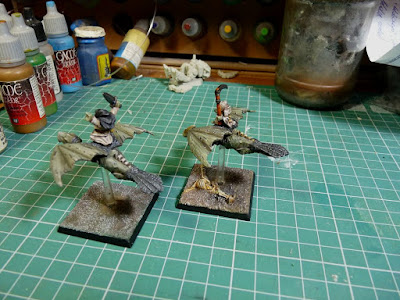 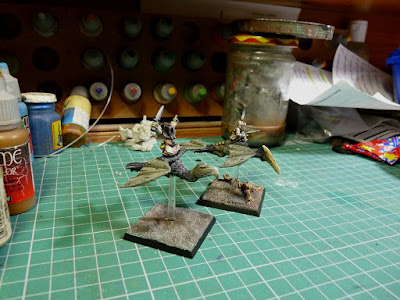