I can smell something's rotting...

Looks like the "normal" job is taking more of my time than I'd like so here's something which has been waiting for photos a while.
Since the last post I managed to get some bits painted and also we managed to play 2 Warzone 1.0 games.First piece is oldie Cartel agent. Kinda test model - I got some more mecenaries (Warzone, EM4) and they all should look decent together as NPCs in the game.
As for this specific one I leant applying 2 coats of supermatt varnish ain't good idea.
Not sure why I did it (pros and cons of having beer while painting...) but the second layer took pretty much of glazes used. Or just maybe I should finally start painting with stronger contrast instead of bitching every second model?
Lesson learnt anyway and here's the first one: Cartel agent, nickname "Hannibal": 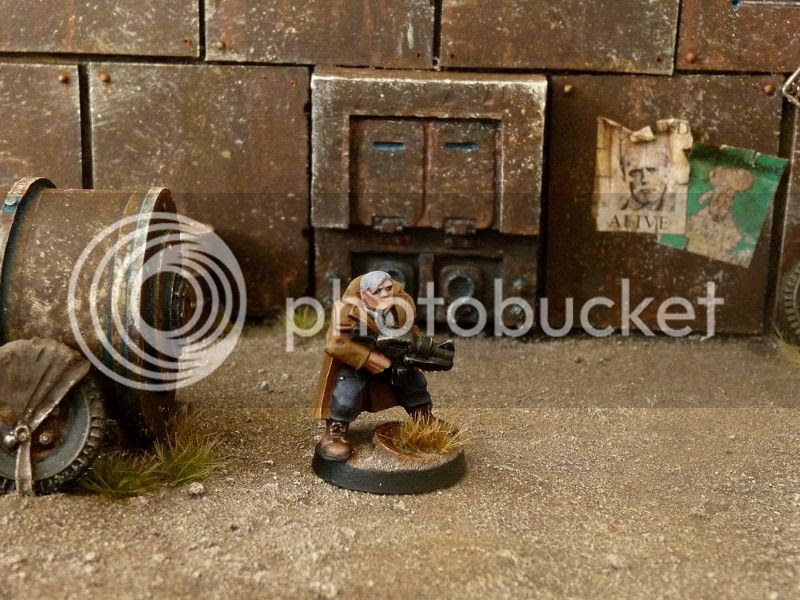 Right:
wimpy 'uuumies no more, time for something decent!
It's my big personal achievement because so far I've been trying to get this model finished like 4 times? 5 Maybe? So glad to see it together with the rest of the painted crew.
Painting is nothing original - it's based on the "official" paintjob, Bonner's beautiful artwork and painting I saw in Mutant Chronicles zine.
I also got 2 more versions of the model so when they're done group shot should look really nice. Besides blue flesh contrasts really nice with the background and might be reason pic didn't turn out total crap (although the base looks brownish here while it's deep, matt black).
Hope you like it - this charmer was one bit pain in my opponent's ass during the lastgame. 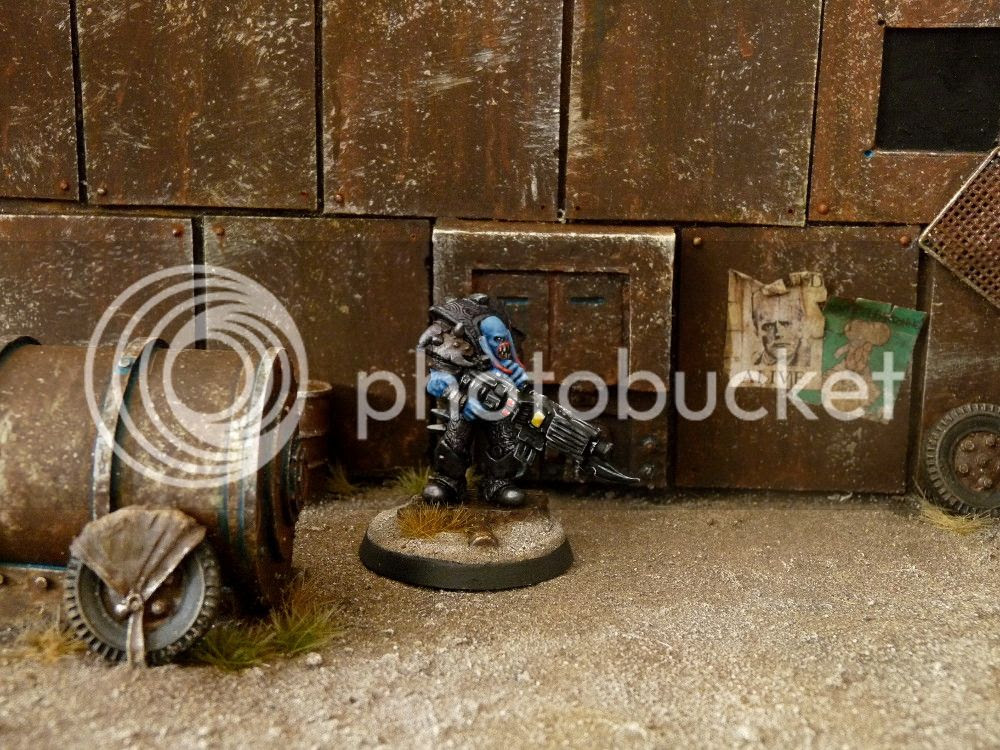 And something fresh. Well... Recently  rotten. And definitely underestimated: Demnogonis' curator (and centurion proxy in my small force).
I remember when I got the model looong time ago - highschool times, I tried to paint it, failed, marked the piece useless, cut off the head and gun arm (for conversion purposes - failed is anyone interested) and threw remains into the bits box.
Got this sculpt a month or two back (thanks a lot Jolanta! ;-) ) and decided to give it a try. I was having lots of fun working on this dude. It has so much potential I almost regret I don't have another one - although it would be nice to get rid of that Satandamn, bendy blade.
Hmmm... I wonder is there a chance to find that oldie, mutilated remains in my torture chamber... Eeee, eeee, eeee... Gaming spot! Yeah, I meant gaming spot from the beginning! No headless corpses there! No need to check the strange smell or call the police... 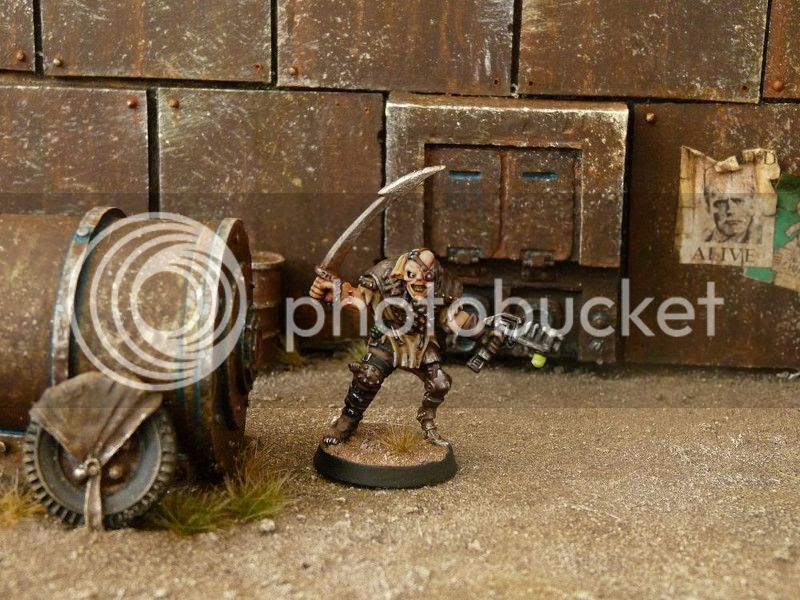 And some family photos.
I must say this time pics turned better but there's still lots to work on (for example brown - black bases I mentioned above).
I gave a try to sth new: no artifical lights were used and also I placed another filter over the minis. Looks like summer light was the reason of recent photo-problems. 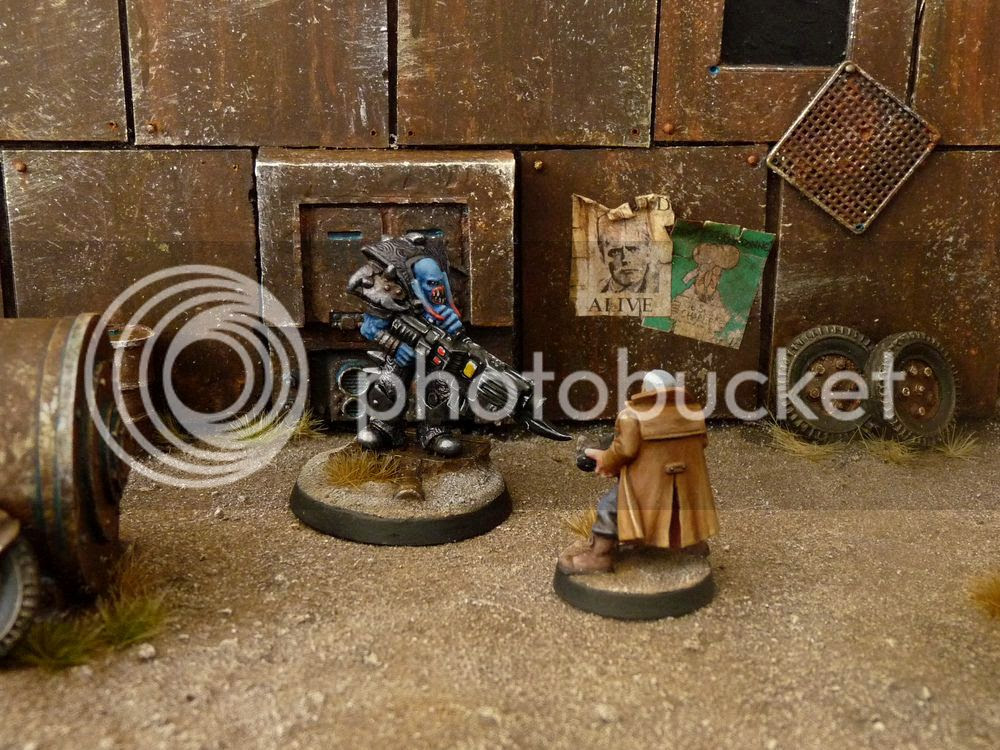 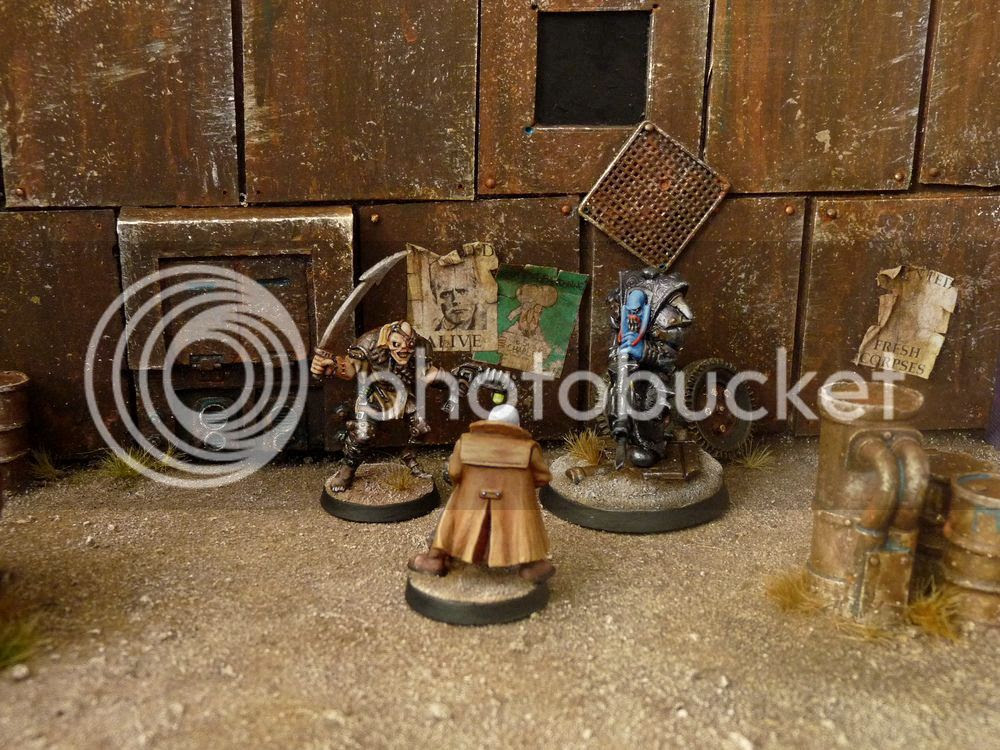 And last but not least: some (bad quality, smartphone-made) photos from the battlefield.
Last weekend we had a 1500 game: Dark Legion vs Capitol.
This time this was REALLYfast: after the table was prepared and deployment zones marked my opponent said all Capitol forces either use advenced deployment rules or will be dropped from chopper hovering over the battlefield...
Nice, eh?
So the only thing I could do was setting up more-less varied defensive line and wait... 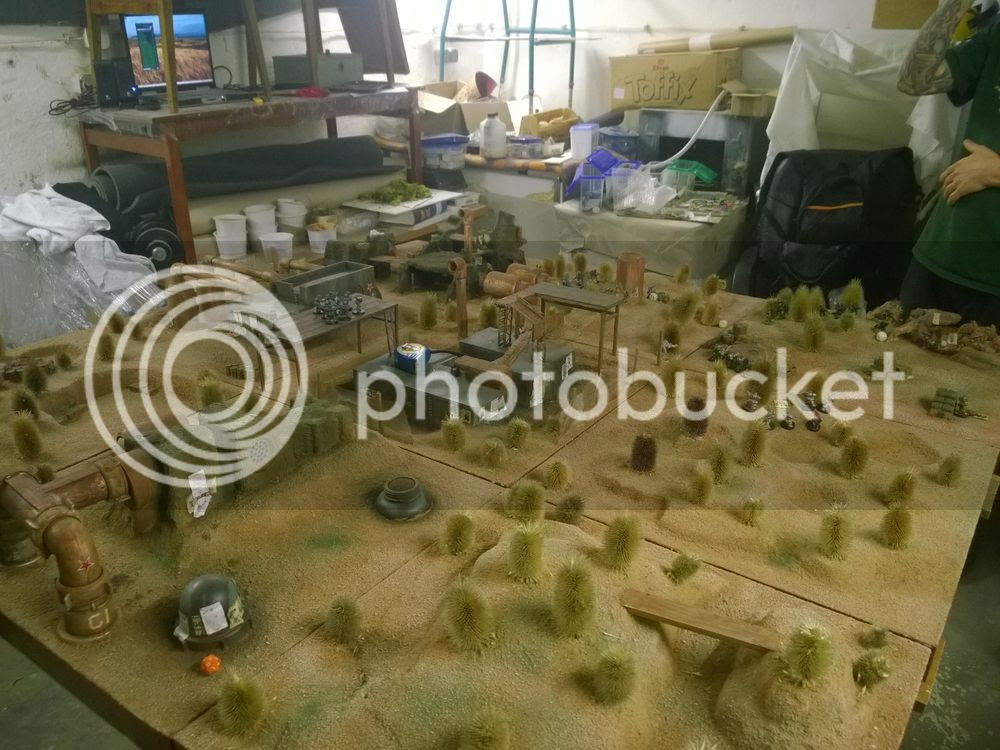 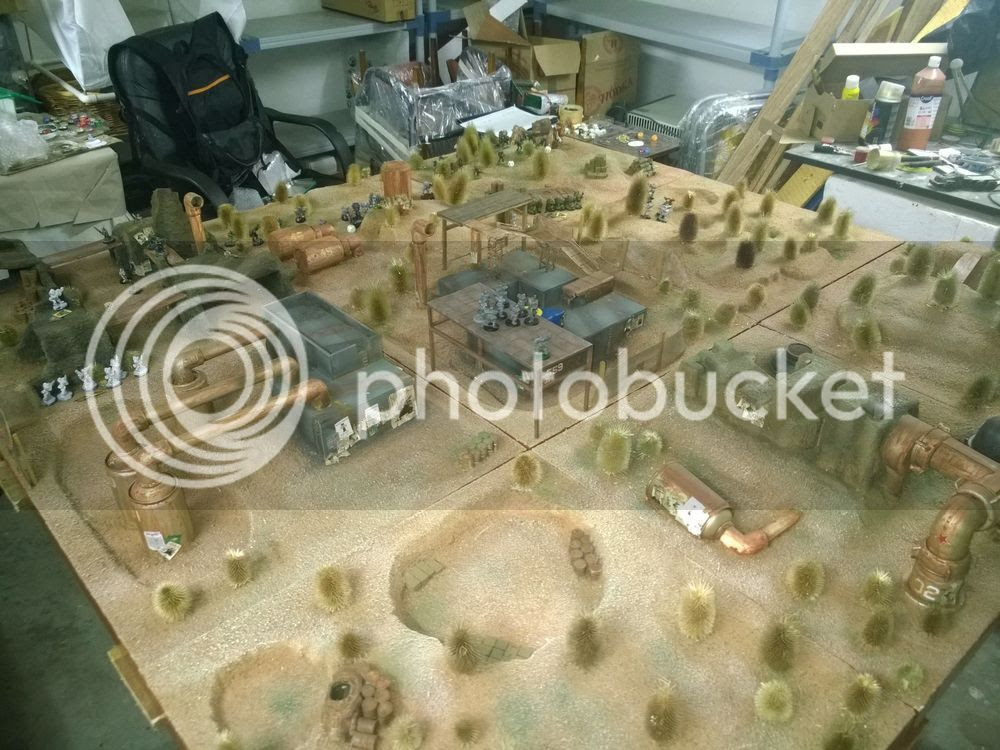 See? Those bastards were deployed just in front of my face, hidden, full metal jacket.
Therefore the game was really fast for WZ 1.0 standards:
all I could do was trying to leave the deployment zone and avoid napalm shells. There were lots of dead bodies piled fast so we had lots of fun.
Not enough for battle report but until we get more light in the gaming spot and until I start bringing my camera for gaming this is the best we can get. 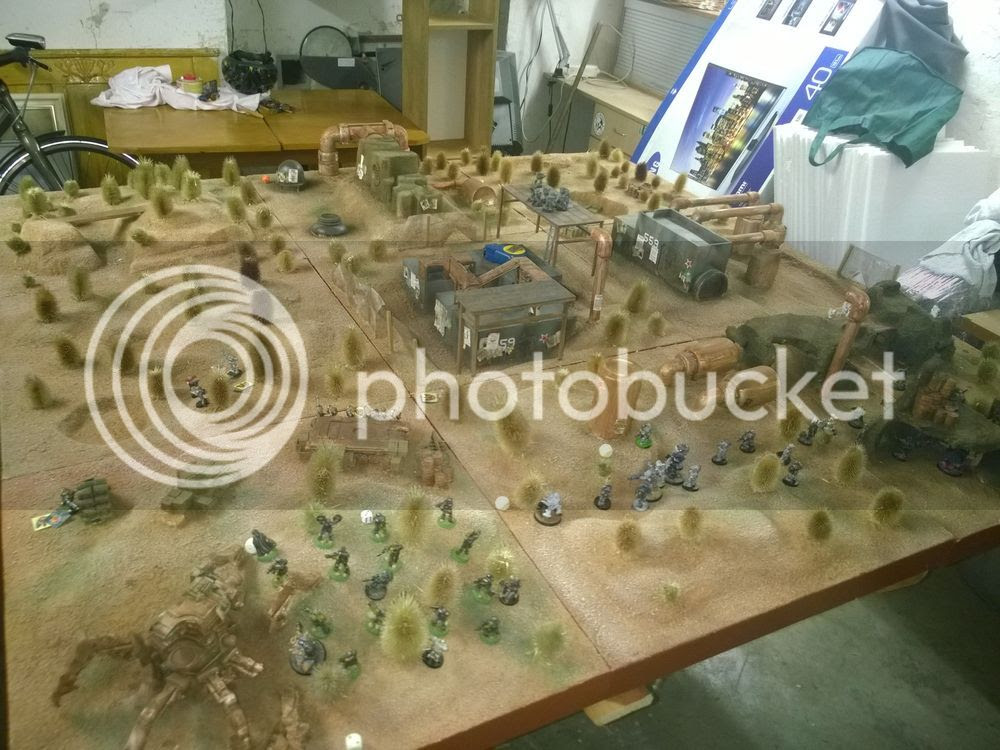 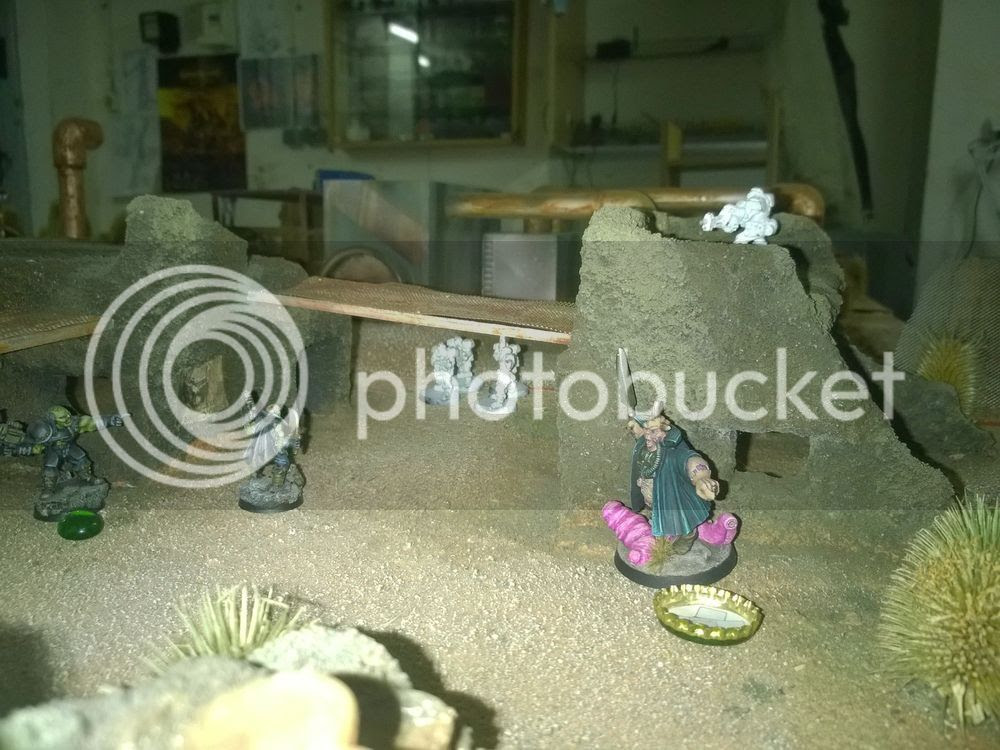 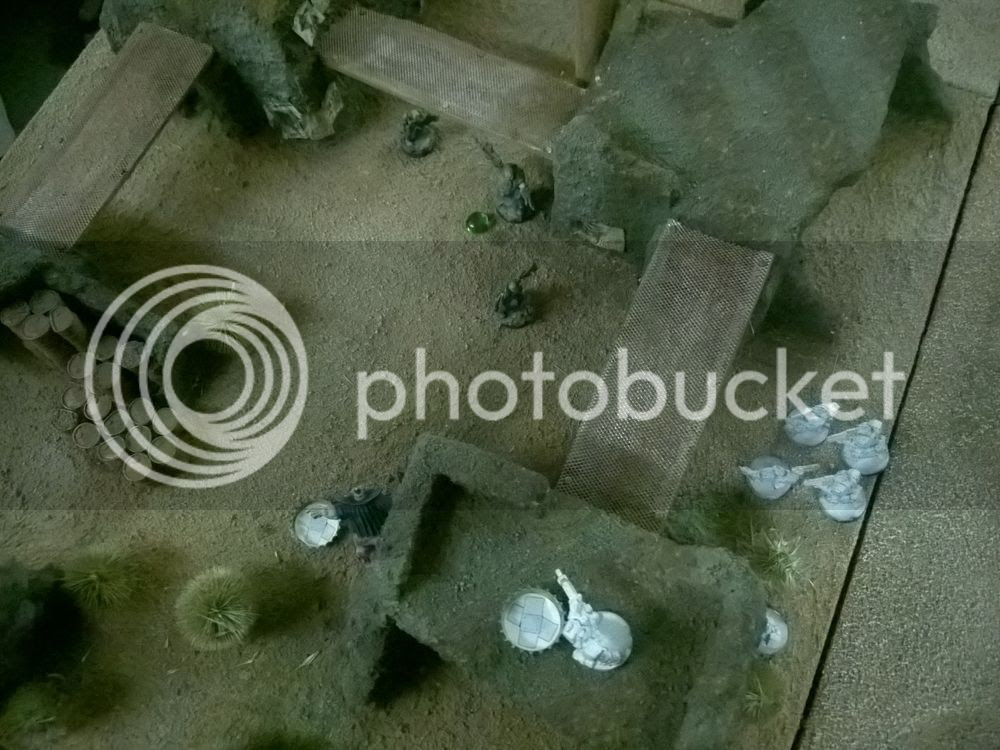