Apparently I must be really fed up with winter, COVID and life in general, because my painting got pretty weird and colorful recently.
And if pink Autoblinda was weird even for my standards, that Carnifex is just acid! 🤪
Acid or not - I like the final result: good acid...
So is the model: it's true eyecatcher in my mostly monotone display case.
In fact I wanted to paint this model for quite a long time. In my opinion it's one of the coolest piece from old Tyranids line:
massive, menacing, fu#king badass! Not even mentioning that cutie-cutie mouth! 🤗
I had some ideas for painting the thing but after spotting some rainbow crabs photos decision was made to follow the path of Slaanesh. Which actually brought the model pretty close to the official paintwork from the 90's.
The model is big and colorful so I gave it bright, beach base for stronger contrast.
To present the scale I added tank turret from M4 Sherman tank (parts from proper 40k vehicles run out long time ago - most of them were used for Dagon,  Mjolner and Beast 666). Fluffwise I imagine if leaving the nest / den / whatever is where these bastards live, to examine what emerged from the ocean of sand:
there still might be some meaty snack inside after all! Told you it's cute! 🥰
The base is pretty large, but the model definitely deserves it. Not mentioning the fact it prevents if from falling, during the heat of battle (I really hate fixing chipped paint). I got the base with M2A1 howitzer - it was too large for medium  artillery piece (didn't fit ruins and buildings) but it's perfect for self-respecting alien creature.
So here it is, hope you like it: 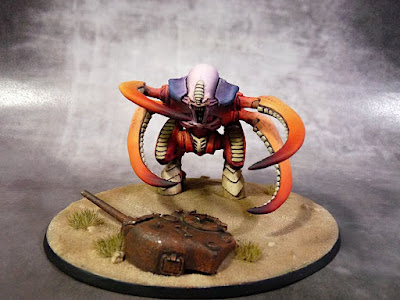 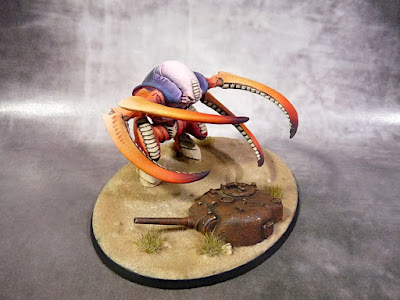 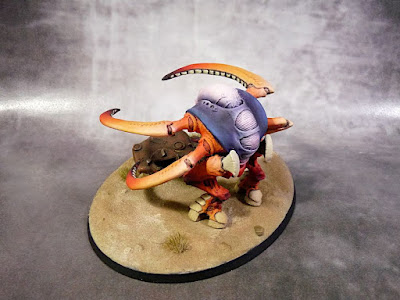 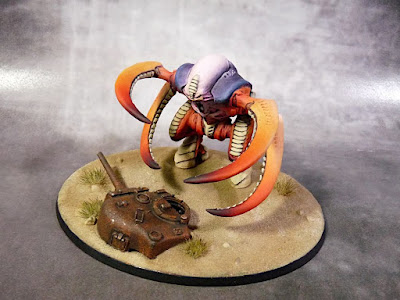 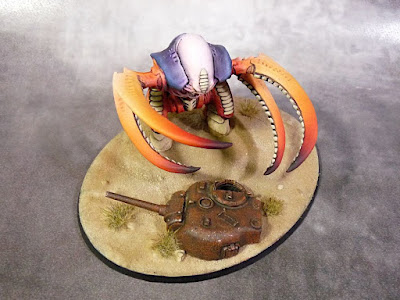 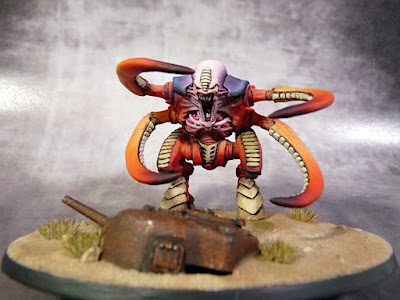 After uploading the pics I see the bone parts are way too clean and flat - they are getting additional layer of wash and pigments for stronger contrast. I also realised I run out of gloss varnish / water effect - it should be used on underbelly and mouth - crabs (and cosmic crabs in particular!) should these areas  seem to be wet.
Added to the list...
Posted by demi_morgana at 10:03 AM 11 comments:
Email ThisBlogThis!Share to TwitterShare to FacebookShare to Pinterest
Labels: Carnifex, chimera, hellhound, M4 Sherman, Middlehammer, Oldhammer, rhino, Tyranids, warhammer 40000

Apparently I had to vent after painting some more green models for my US force recently, so decided to achieve that by painting something as far from olive green as possible 😁
I got this model quite a long time ago, but is was just collecting dust in the glass case - there's not much fun of military model which cannot be used in Bolt Action (it's 1:48 scale).
So since I wanted to paint something eyecatching and practice pink/purple before starting some Purple Hand cultists, that pink monstrocity has been spawned... 😈
Looking at it now I think such models are just very good way to turn attention of little wargamers' daughters from magic ponies, cute princesses, care bears and other similar crap to military wargaming. If any of you have a small daughter - feel free to borrow the idea.
After all: ain't war hell? 😋 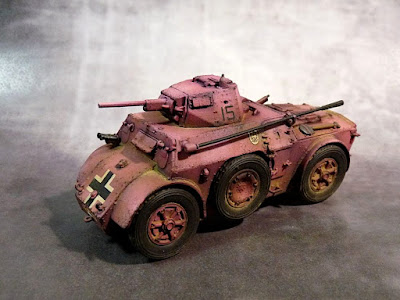 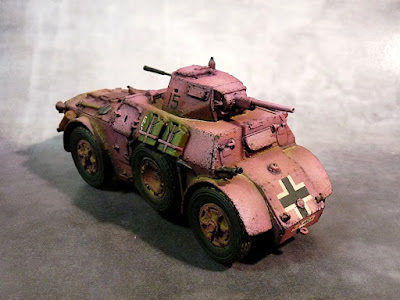 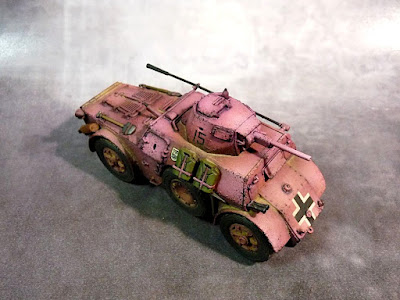 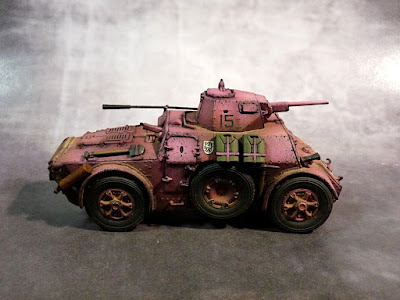 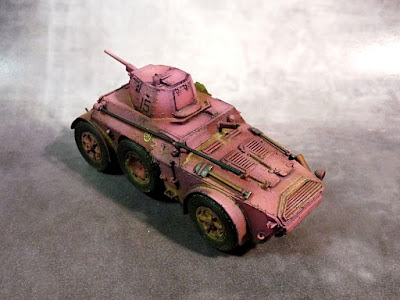 Posted by demi_morgana at 9:47 AM 6 comments:
Email ThisBlogThis!Share to TwitterShare to FacebookShare to Pinterest
Labels: Autoblinda, Italian army

Hey again,
This time my US force got some new toys to deliver flamethr...  Eee... Eee... Democracy! Yes! Democracy! To deliver democracy even faster!

Recently I got some more fresh prints from Warpainter - this time it was US army Jeep bundle. It's the third attempt to paint models from this manufacturer after M12 GMC and Renault FT 17 and must say I am very pleased about this stuff. Printed models sure have pros and cons but it's just great source of models unavailable from the major players.
Especially if you plan running army of Italy or Hungary... 🤩
Below is what you get in the box: 3 Jeeps including armored one and one with tarpaulin. Models require little cleaning .and because of simple construction painting is pretty fast: it took me 2 evenings to paint each of these.
As for cons - these wheelers have no crew 😑
On the other hands the intelligence reports some works about it have already been undertaken so you just better check Warpainter's site once in a while... 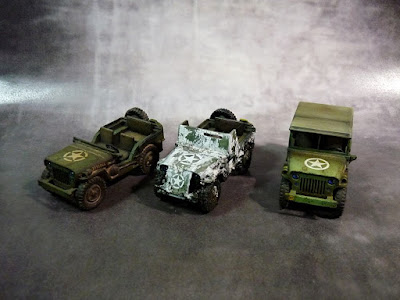 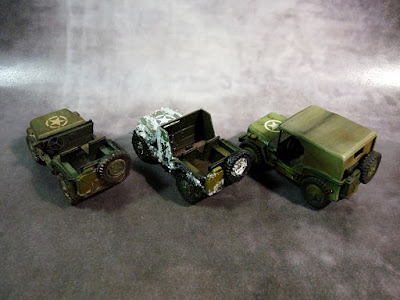 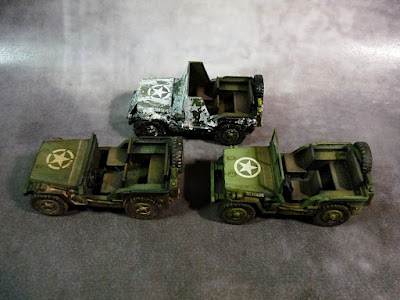 And the Jeep family alltogether: 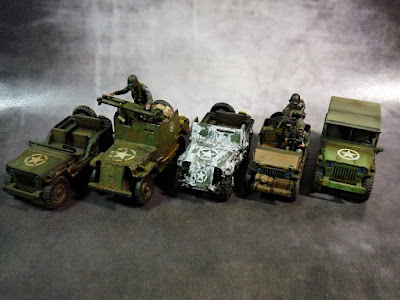