Looks like Mr Omicron got me good, so I've been grounded for the past few days. After re-launching trusty Fallout 3 and reading some books decision was made to improve painting statistics, therefore squad of Chasseurs was dragged on the painting desk.

I've never commanded Cybertronic force so these are supposed to join post-apo neo-soviet force I've been building recently. They all look like clones of Ivan Drago from Rocky 4, so:
genetic engeneering + cloning + steroids = Cybertronic.
I really do not like painting whole units at once - no matter how hard I try the final paintjob quality is worse then painting one model at the time. And that's what happened here, but it's much faster way to get the job done and I wanted to see them ready for action yet before the isolation  ends. Trying to make them fit the NBC suit squad pants were painted flanker blue. Looking at the photos this element is pretty dull - adding some tearings could be good idea.

Sculpts are pretty simple so I added some decals (squad marks, trendy vintage tank top and tattoo) and contrast bits like Casio-like organizer screen (or maybe they carry Game Boys to battle) and of couse - red visors. They are neo-soviets, so they sure see the universe red... 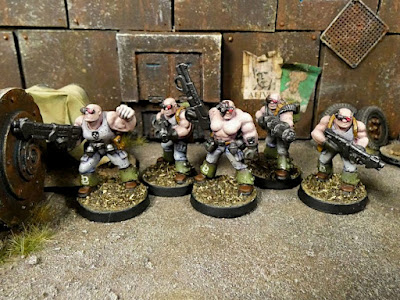 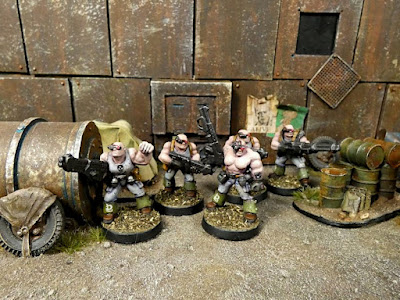 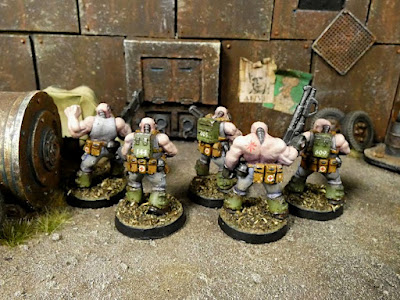 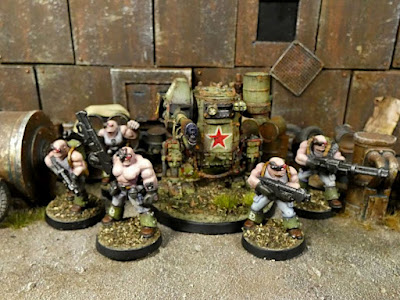 And whole warband infantry at this stage. Must find proper commander for them, probably with big, red officer hat. Should still have spare oldie Valhallan commisair somewhere... 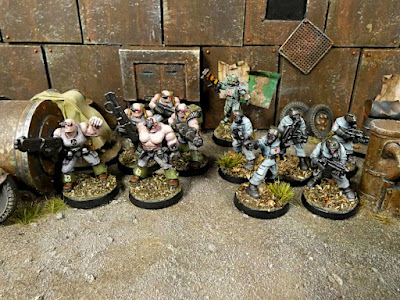 In the previous post there was a music piece and while I was varnishing the squad another one came to my mind. I am seriously considering naming the squad leader Russel... 🤔
Posted by demi_morgana at 8:55 AM 4 comments:
Email ThisBlogThis!Share to TwitterShare to FacebookShare to Pinterest
Labels: COVID-19, Cybertronic, EM4, killa kan, post-apo, terrain piece, Warzone

Gripping the wheel his knuckles went white with desire
The wheels of his Mustang Exploding on the highway like a slug from a 45
True death
400 horsepower of maximum performance piercing the night
This is Black Sunshine.
After having the first test game of our home-made post apocalyptic system, neo-soviets were sent back to barracks for recovery. While waiting for rules upgrade, I was browsing FB looking for idea for the next paintjob and then I spotted some Carmageddon / Mad Max cars. Turned out these were warbands for Gaslands game. I haven't seen that before but after checking the rules the game seemed to be intersting enough to make me paint the model 😎
The game uses customized Matchbox / Hot Wheels cars. Luckly for me my son left his old Hot Wheels Corvette at my place, and since he's now totally into video games, decision was made to give the model new life.
To get it prepared for the carnage, I got North Star's Gasland conversion kit. There are lots of really cool parts like machine guns, harpoon, dozer blades, engine upgrades and such.
At first I wanted to add as much junk as possible on the model, but then I thought I don't want to make it look like some some stupid WH40K vehicle.
So in the end I only added extra exhausts, engine block upgrade (whatever the hell it really is - I know sh!t about cars, except how to drive) and replaced fronc and sice screens with mesh. That makes car look pretty cool and yet credible.
At first I wanted to paint it bright - like white body with blue stripes. On such basecoat chipped paint would look just great. But then good friend of mine said: "Paint it graphite!".
Didn't like the idea but then I recalled Death Proof and Black Sunshine badass cars and decided to give it a go. Must admit the final effect is better then I expected - silver scratches plus bright dust provide nice contrast. I added some metallic paint to the mixture but it's barely seen now under 3 layers of matt varnish (Revell run out so I had to use Vallejo Air).

So here's the beast.
The model behind is out of scalebut it's just perfect candidate for post-apo road warrior 💀 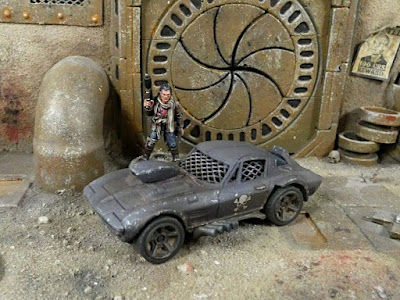 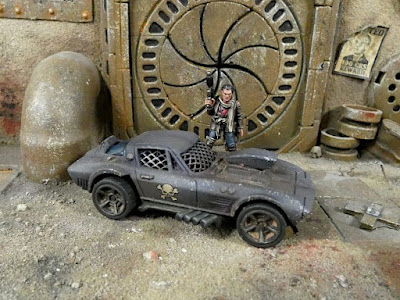 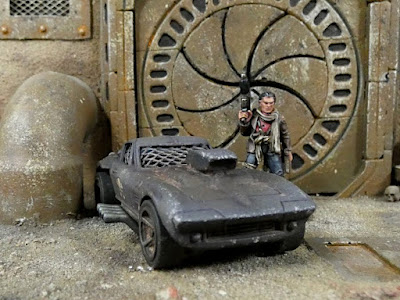 Obviously it's the Devil's engine... 😈 And the freshly stripped model with some add-ons: 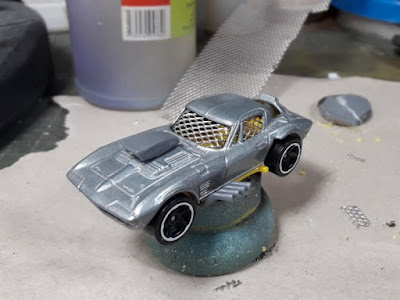 And this is for all those who haven't heared White Zombie's masterpiece...
Posted by demi_morgana at 11:55 AM 5 comments:
Email ThisBlogThis!Share to TwitterShare to FacebookShare to Pinterest
Labels: EM4, Gaslands, post-apo

I was actually supposed to paint something else but while digging in the Pile ov Shame recently this guy emerged to the surface so I decided to bring it to wargaming life.
As for it's story I got it few years back (cannot recall where) but the model ain't young for sure. If I remember correctly it was released yet before Fallout skirmish game. Back days I used to play Fallout on Playstation lots of time and was big fan of the game, universe etc. Still think Fallout series is one of the best games released ever.
Anyway when the model arrived is was washed, cleaned, assembled, undercoated and then realised I have absolutely no use for it so few days later it was casted onto the Pile...

Shame, shame, shame... 😔
And it's been just like that until the end of last year, when I started adding additional members to the neo-soviet generic warband. There are 5 infantry models at this moment, so the power armour dude is supposed to provide some heavy support.
In theory they are the same scale but the new one is more like 28 mm then 25 mm which makes power armour even more credible - there's a neo - soviet locked inside after all! 😉
Must admit whole this creating generic warband is lots of fun. In fact I am planning to add several oldie Cybertronic chasseurs - they are MUCH more bulky compared to EM4 models but that makes them great candidates for steroid-stuffed androids. Hope you like it 🤖 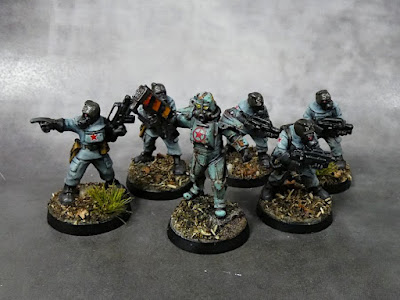 About to deal with bunch of scavenging scums: 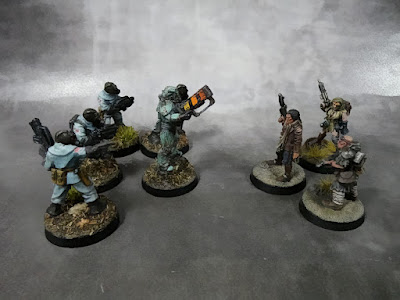 And Mr Powerman himself: 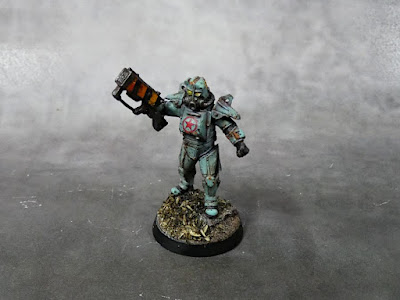 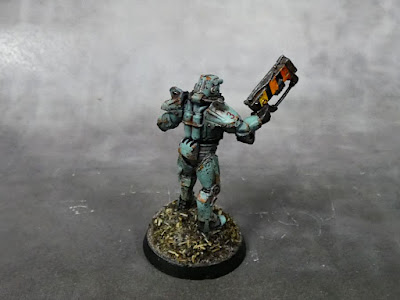 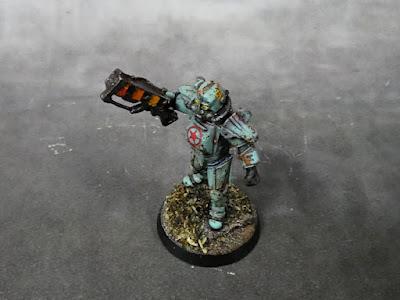 While waiting for Warzone Eternal project to be launched I decided to bring another oldie from pile ov shame darkness to light: Capitol's Great Grey skimmer. Back days, when the first edition was still alive I've never seen in action but I accidentally got the model a month or so ago. I am no sculptor, so try not to judge others' greenstuff jobs (like: don't like it? No problem, but instead of b!tching about it grow some balls and sculpt better 🙄) but this one with no doubt is one of the most screwed up models in the original Warzone line. Actually the vehicle is acceptable but it's operator is just abomination.
It's almost as horrid as infamous Imperial Barracuda... 🤢
But I have lots of heart for such pieces therefore I think every model deserves nice paintwork - no matter the sculpt. At first there was an idea to replace the head with closed helmet but all in all decision was made to leave it in original shape. No matter someone likes it or not.
As for the color choice the combo is result of mini poll I put on FB a while back. It's clearly based on "Flanker" color scheme. Pretty striking, especially over Mars-style base.
Hope you like it. Ladies and gentlemen, I present you: the war dolphin! 🐬😁 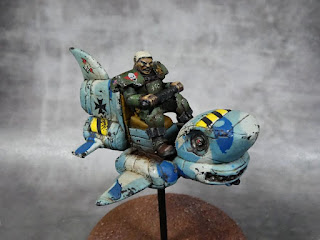 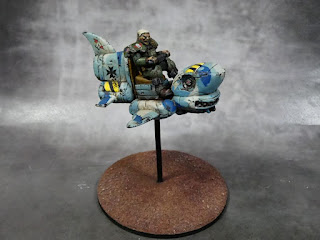 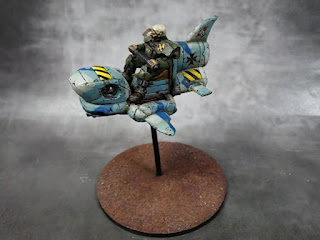 I do not like the way exhausts turned out - they were much brighter but in the end I decided to hit it with yellow filter and that's the result: 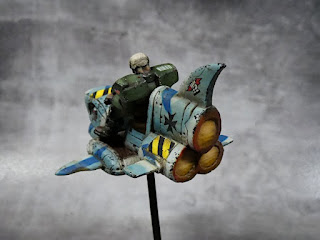 But I definitely like the scale shot. The Capitol skimmer below is either evading patrol of undead legionnaires or about to gun them down with on-board weapon: 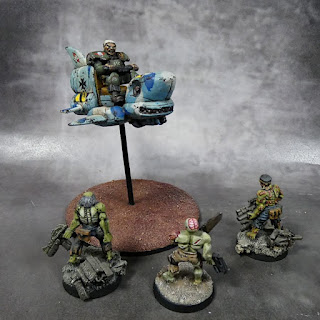