Oldhammer Weekend Poland 2022 project is nearly done - just a few characters left to be painted and replaced. Among them there is a wraith champion.
I really like those floating housecoats, but I have dilemma about choosing color scheme:
should it be 90's color combo or maybe ghostly-white - for strong contrast with the army.

I posted short poll on Middlehammer FB group to help me make that crucial decision and I was asked to show the rest of the army to make voting easier. So here it is.

I have no idea how to take decent pics of such size - I think large backdrop sure would be helpful. But photos give overall impression what is under command of my Lords of the Dead. There's still a lot to be painted to finish WHOLE army:
cavalry, another screaming skull catapult, metal skellies, more zombies, wights, wraiths, wight lord on wyvern, Dieter Helsnicht on manticore and more characters... 😨 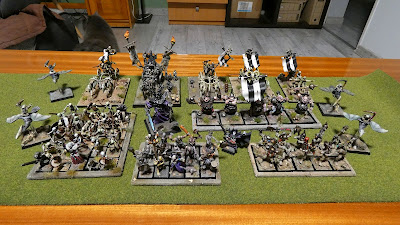 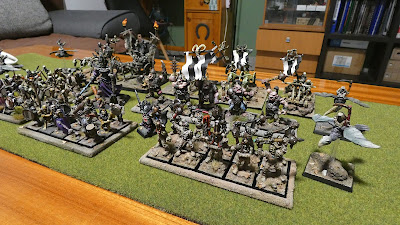 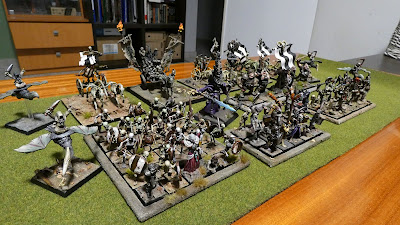 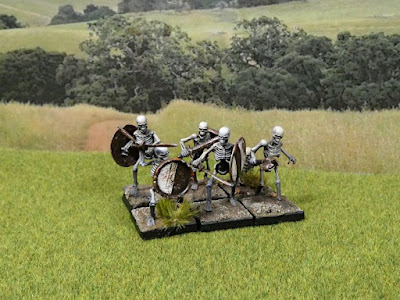 Apparently basic shape of Undead Army is ready for Oldhammer Weekend next month! 😏
As mentioned in the previous post skeletons can be painted with lots of colors so this time I gave them blue glaze. They turned out fine and provide some vatiety to the army's main regiment. After posting the previous bunch of skellies I was asked about my way of painting shields and since it's no state secret - here it is.
As for shields I picked some fresh ones from the unit box but also decided to recycle some oldies from my beginning in hobby. From the very bottom of the bits box...
You can still see some original painting from over 20 years ago. Hard to admit back days I considered it decent and skull white + flesh was combo was the best discovery since inventing toilet paper 😁 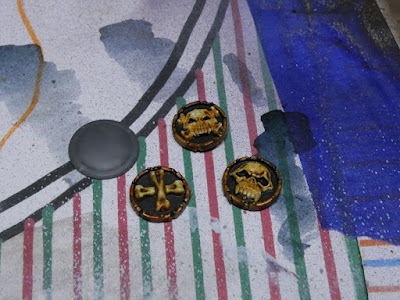 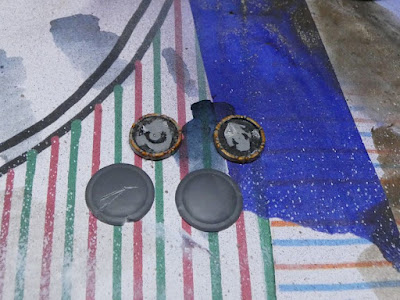 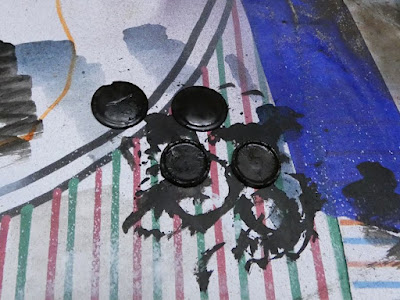 As you most probably spotted I like black and white stripes pattern on Undead models so solid layer of white was applied in the middle: 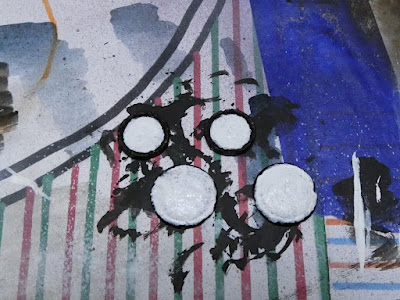 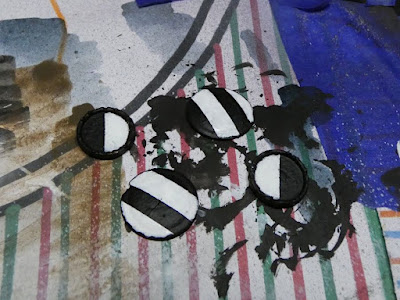 Crude chipping applied with bit of spare sponge. I used charred brown, beasty brown (?) and parasite brown. I think any brown colors will do the job right as long as you use at least one tone similar to orange: 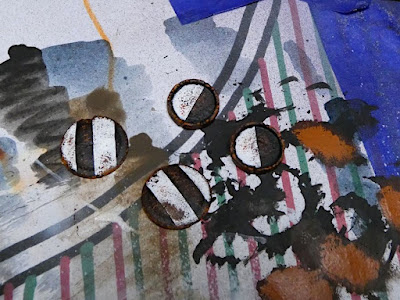 Some further chipping with steel silver: 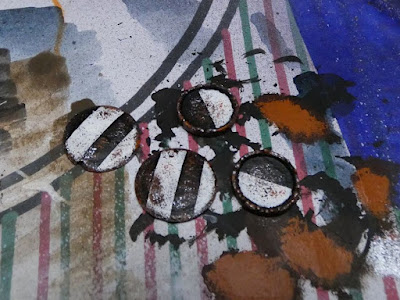 I didn't want these to be too dirty so I added just a little bit of brown wash and few streaks of smoke ink: 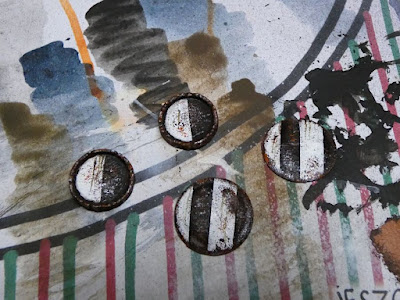 Shields attached to the arms and waiting for varnishing: 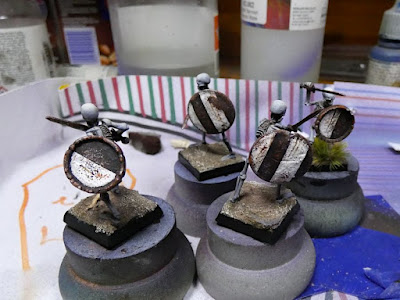 And here they are - more candy pictures!
Skellies might be too small on the picture but it's also test shot of new photo backdrop. Hope to build and add some small terrain pieces (wall? hedge? tree?) to make the scene more realistic but even without them I really like the pic - strong 90's vibe.
The only thing missing here are goblin green bases and red armoured chaos warriors 😊

If you like the green grass on the photos and want to upgrade battlefield with some brilliant terrain - check Terrains 4 Games offer.  It's the second grass mat I have from these guys and really like their stuff 😎 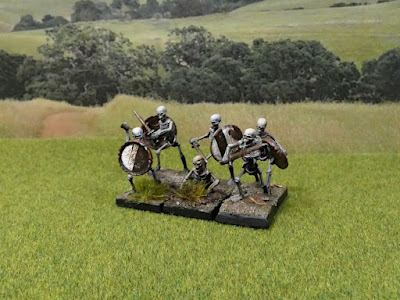 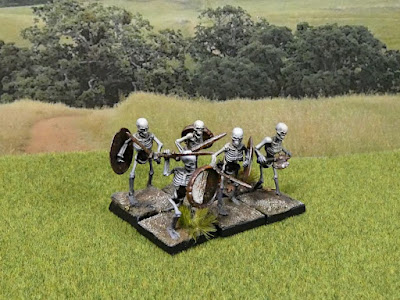 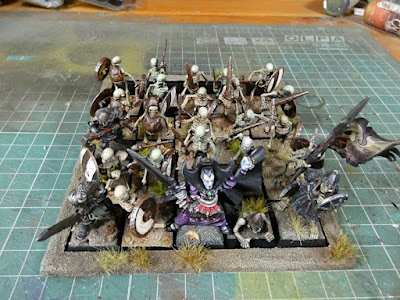 And that's mostly because it turned out there'll be 1500 points Warhammer Fantast Battle 5th edition campaign during this year Oldhammer Poland event and I deeply hope to move my ass there to re-charge hobby batteries! Really cannot wait to see the army assembled and waiting for the battle on grass-green field of glory.

Although don't think there'll be much glory for my Lord of the Undead:
I dropped this game over 20 years ago (still think WFB rules are just stupid) and have never used part of models prepared for the game 😁
Back days couldn't reach or afford (or most often: both) most of models I liked but managed to collect them during years in the hobby. Mostly by total accident.

Still there should be lots of fun so I'll do my best to field 1500 pts worth corpses!

I am fielding old Undead army, not Vampire Counts, so the main unit is ~30 skeletons led by the Vampire Lord. So much bones around should provide him enough cover against ranged attacks so he can hopefully engage something (anything!) in melee combat.

At first I painted test bunch of 9 skellies. To make final unit less boring I decided to give each "bunch" ditterent hue - corpses look different decomposinging in different enviroments after all. So first group is olive/green (apparently it was damp where they died).
To provide more variety I added parts from old GW skeletons and zombies and some bits from (most probably) Mantic Games. The scale doesn't fit perfectly but apparently the necromancer wasn't picky (or was bit drunk) while getting parts to assemble and reanimate.
There was no complaints so far anyway.. 😁 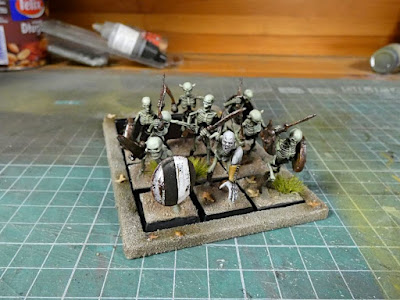 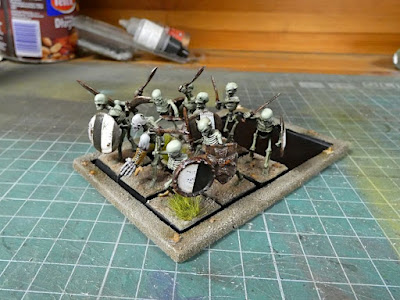 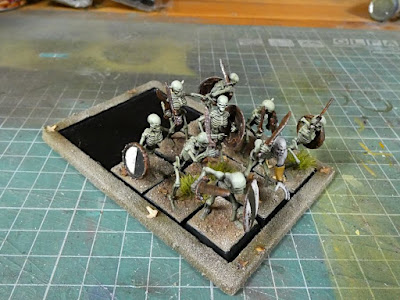 Then another group joined the Vampire Lord.
This time these are classic bleached bone dudes. I also found some damaged armour plates in the bits box and 3 guys got light armour. Once again - everything for bigger variety. 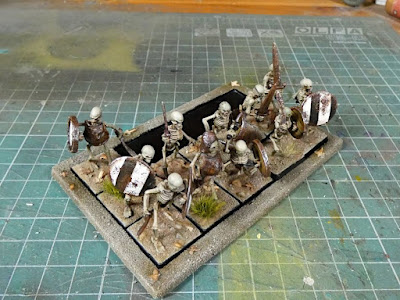 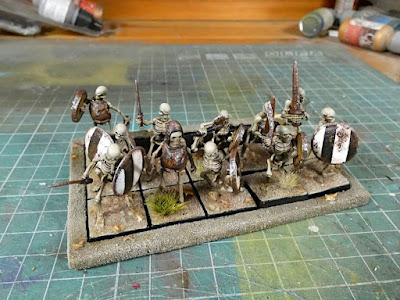 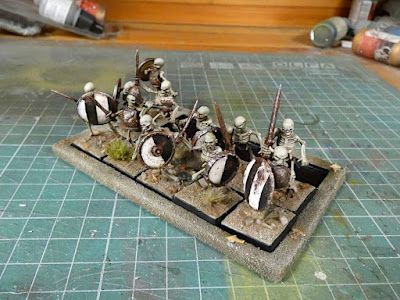 And the main unit at current stage. I still need several more walking dead - this time I think they'll get grey/blue hue. Standard bearer is an old conversion and I hope to build new version of the banna-wava this time carrying proper black and white stripes banner.
Diablo game is good source of colors for deaders btw. After the army is finished I'd really like to assemble supporting unit of skeletons painted red - something like burning dead. Personally I think painting skeletons red is silly BUT whole unit of these should look just great on the battlefield among "normal" deaders. 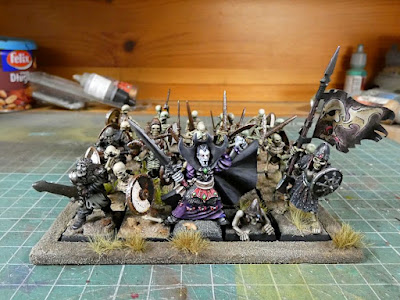 And the last thing. As I wrote earlier mummies got bigger bases and some cork to make them look more massive compared to standard undead infantry. The trick did the job I think:

I've just came back from Khemri and because some Cryx models are still getting ready in paint stripper spa, decision was made to rescue something else from the very bottom of paint stripper container.
What you see below is Raze from Dark Age range. From what I can see I got it almost 10 years ago but somehow never managed to make any use of this model. Must say I got Dark Age materials + some models just because of Brom's artworks. These is really coor but also really weird sh!t, so that's probably the reason I painted only 2 minis from the range so far.
The fact game rules aren't anything special also could have something to do...
It's my 3rd attempt to paint this models and I'm really glad I can finally see it painted and sealed. Had some ideas how to paint it but once again I feel just best using natural tones. I am still considering adding some blood on the piece. Not sure is the "pizza cutter" the best place for it - it's rotating blade so my guess is if such a weapon hits the flesh - the blood should cover just like everywhere, and I am rather satisfied of the paintwork... 😁 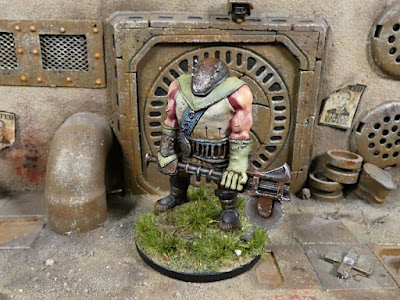 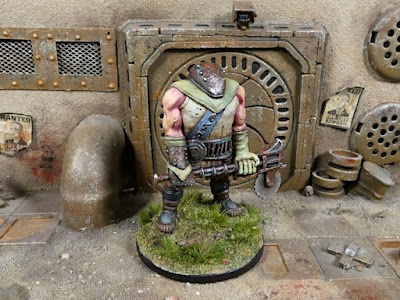 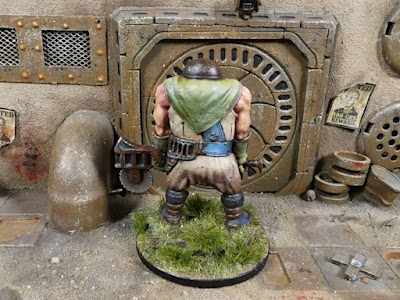 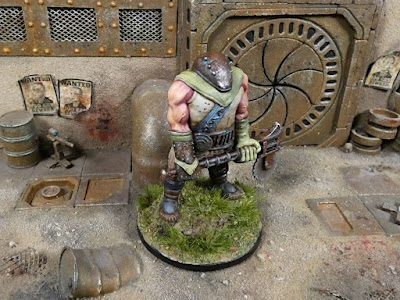 The model is pretty unique both by design and size - probably that's because I couldn't find any use for it on gaming table. Looking at it compared to other models, it could proxy Chaos Dreadnought with ease. It's makes Skaven rat ogre look like a kid, not even mentiotning human size miniatures (on the pic - Warzone Cybertronic chasseur hero).
Really happy to see it crossed off the shame list. Time to wash off sth more ordinary... 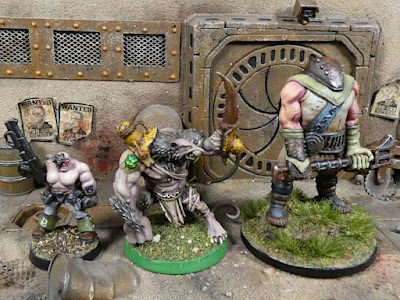