Demons to some, angels to others.

I didn't expect to paint as much this month (yeah, yeah... 4 models is pretty much paintjob for some) but apparently miracles happen sometimes. Not mentioning I had not much appraisal work in November.

Anyway I didn't plan to paint anything particular after the griffon so I simply chose oldie metal EE ghoul. I was supposed to be painted a'la feral ghoul from Fallout 3 - reddish, radiation burnt and pain in the ass. I liked the effect so another one got some paint slapped on so I could add them to the Scavvy gang. So there were 2 slaves but no master. Luckly there was metal haemonculus model from dark eldars which was just perfect candidate for such a role (strongly inspired by Hellraiser movie series if just not a rip off - which would be quite funny in case of GW).

I must admit that sculpt was so underrated it took several years for me to even try to paint it. Whoever was the sculptor (any ideas please?) he did marvellous job: the piece is just packed with spicy details and with the alien head it's just perfect for badass character. I am considering repainting other ghouls I have to fit those below so I can have alternative boss for the gang and some close combat scavvies (who need a gunner with BS2 while I can get 2 melee cockers instead, right?).

I remember there was a plan few years back to build Slaanesh cultist band using some Warhammer models I liked (among them ghouls and haemonculus) but all in all they ended up in the string bag. There are still ork based mutants and a daemonette or two (ugly ones with overgrown claws) which might be converted and painted when I find any use for them in Underhive / Ash wastes conflict.

So hope you like this small addition to the still growing gang of the worst you can meet in the Underhive. I have no idea what will be the next one but I think something from oldie Warzone or Necromunda range is the most certain candidate - we're having the game tomorrow.
Speaking of which - we got another gamer!

So there are 3 of us for gaming now!
All those years have finally paid off! Not sure is that a reason to laugh or cry though... 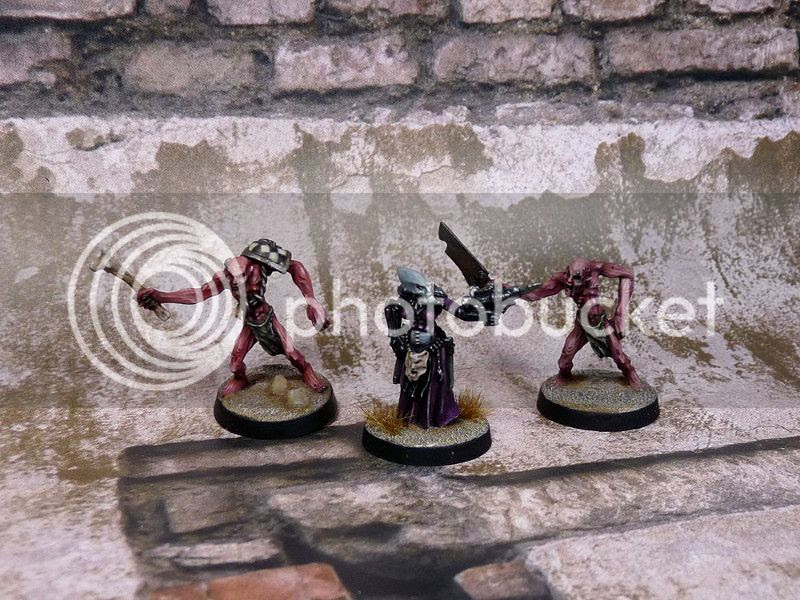 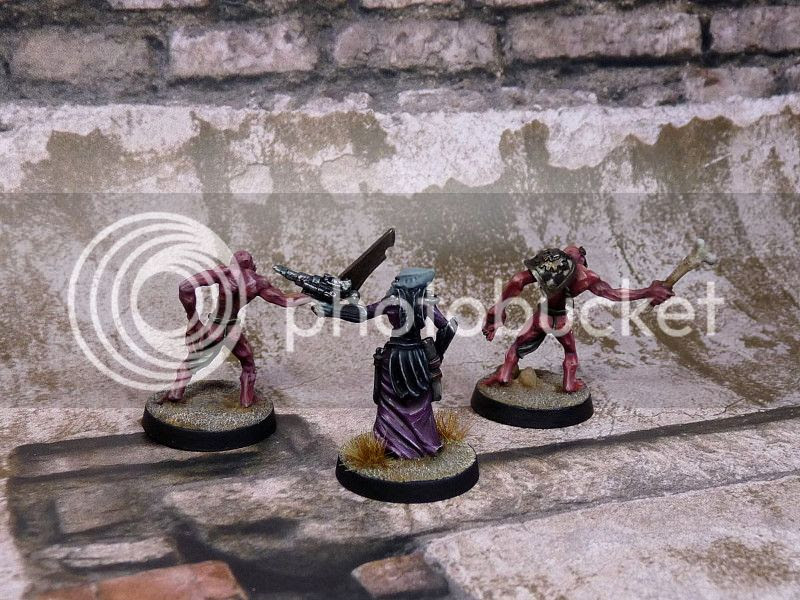 And now something completely different: hipo-griffon

Past time was pain in the ass for me - work issuses and flat renovation (4 bloody weeks...) managed to keep me away from the hobby but I hope to be back at least for a while.
Or for painting some zombie models...

Nevertheless there's been something going on:
first of all I sold most of my Brotherhood models from oldie Warzone - bit over 60 pieces. I got probably whole army few years back but all I did until now was opening the boxes. I am glad they found new home. That lead pile would never see any paint in my place.

Buuut since there always must be balance in cosmos and in the miniatures hobby I also got myself dozen or so minis. To compensate suffering caused by the renovation... And because there's always some room for more zombies.
First bunch was some old Warzone models from Dark Legion - nothing fancy but they were just the missing bits. I also got nice discount for Heresy models: blights and zombies. Always like them but never got any solid reason to get them. 'Till now =]

And finally - pictures!
I mentioned some time back I got second hand griffon* model from Empire range. Never played Empire but those old sculpts are just fucking sweet. The model was sold with no rider though so I decided to put Dogs of War character on it. Suleiman al something.
Fitting the rider onto the beast was bit tricky but with little help of greenstuff, Dremel and frothers the operation was successful.

Long story short - I decided to made it leaned forward so it looks more aggressive, like just about to attack. Also because of new pose rider has a chance to hit the enemy (the last pic) and doesn't look like trying to chop griffon's head off. The pose was also the reason I had to add all those bloody rocks on the back of the base - without additional weight model was falling on the beak non stop.

As for the color choice I had some ideas (also very stupid ones like starting small Border Princes army, led by corrupted character) but all in all I just wanted to see this cool sculpt painted and marked off the list.
So I chose natural palette for the beast and purples for it's master - just for the contrast. That model is not something I like to paint most (haven't seen zombie griffon yet btw) but I am very glad to see another piece from old Warhammer Fantasy range behind glass of my display case.
Hope you like it as well! 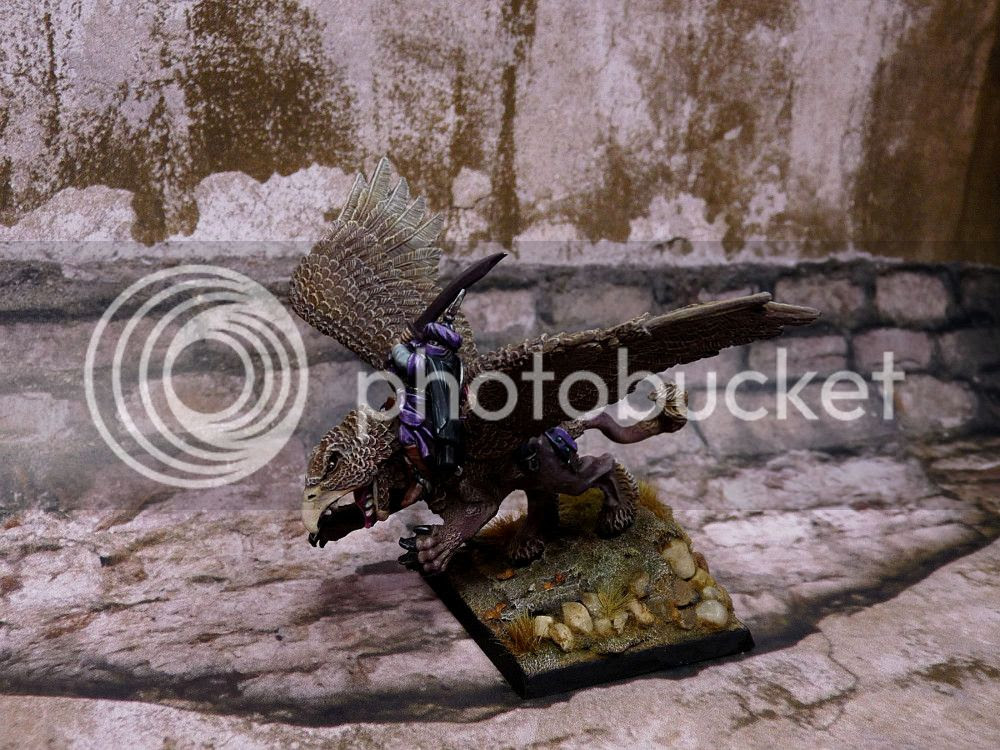 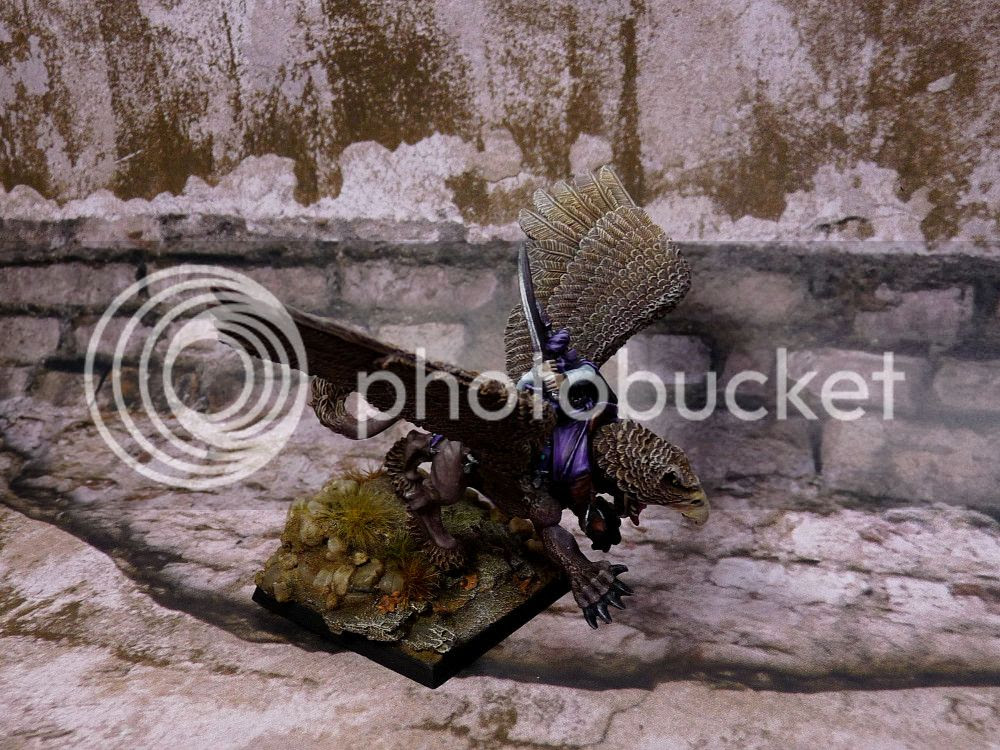 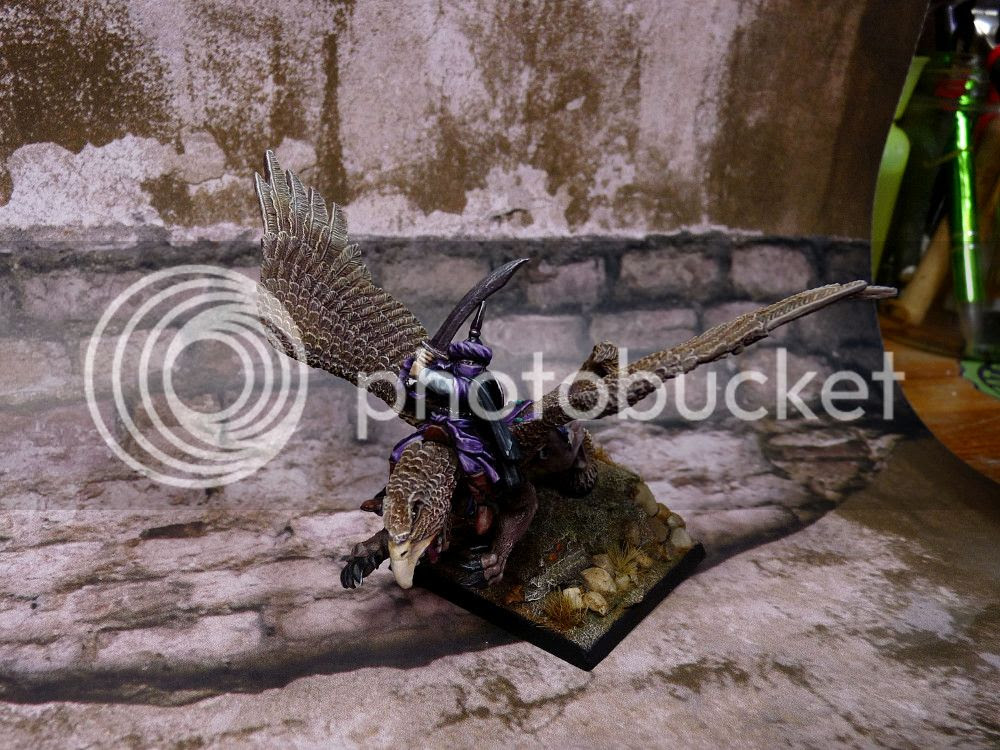 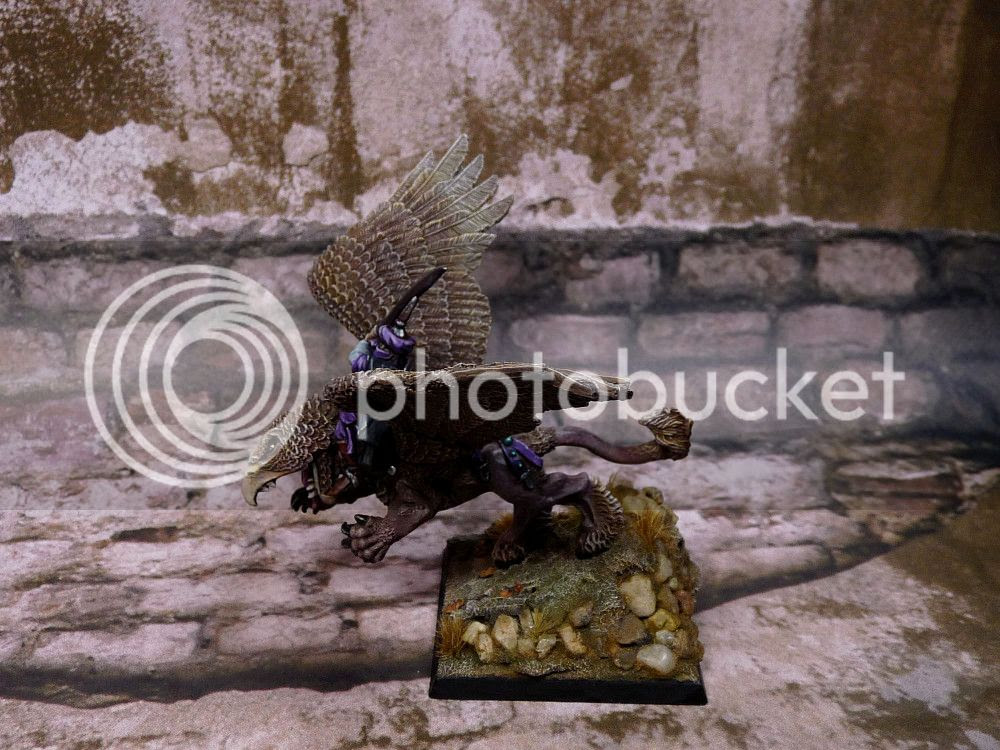 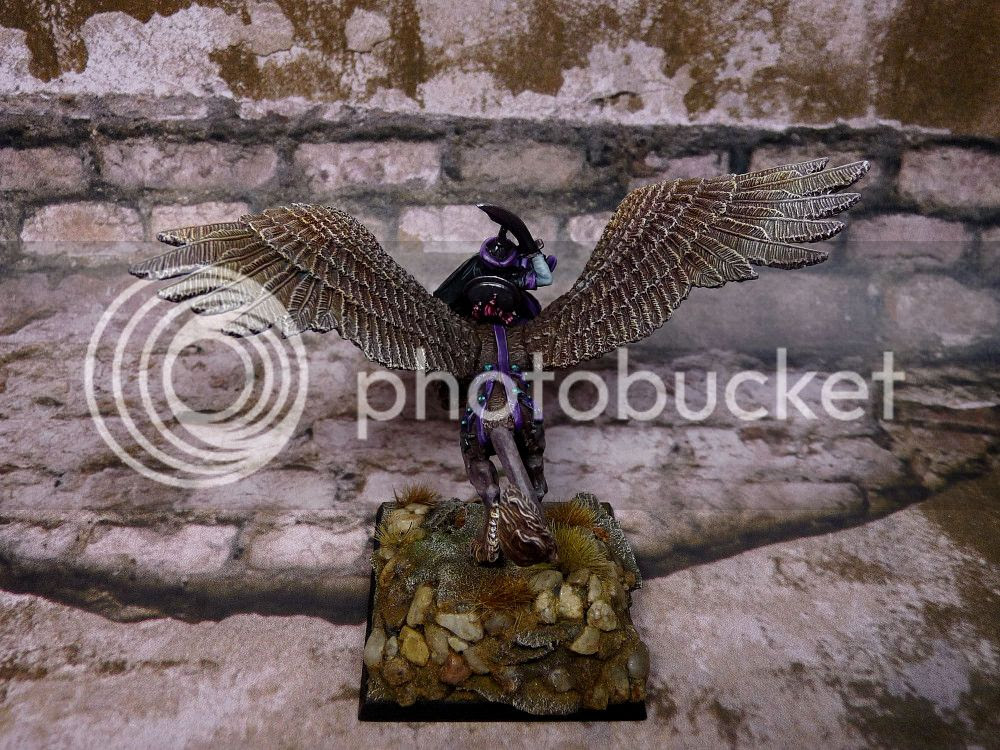 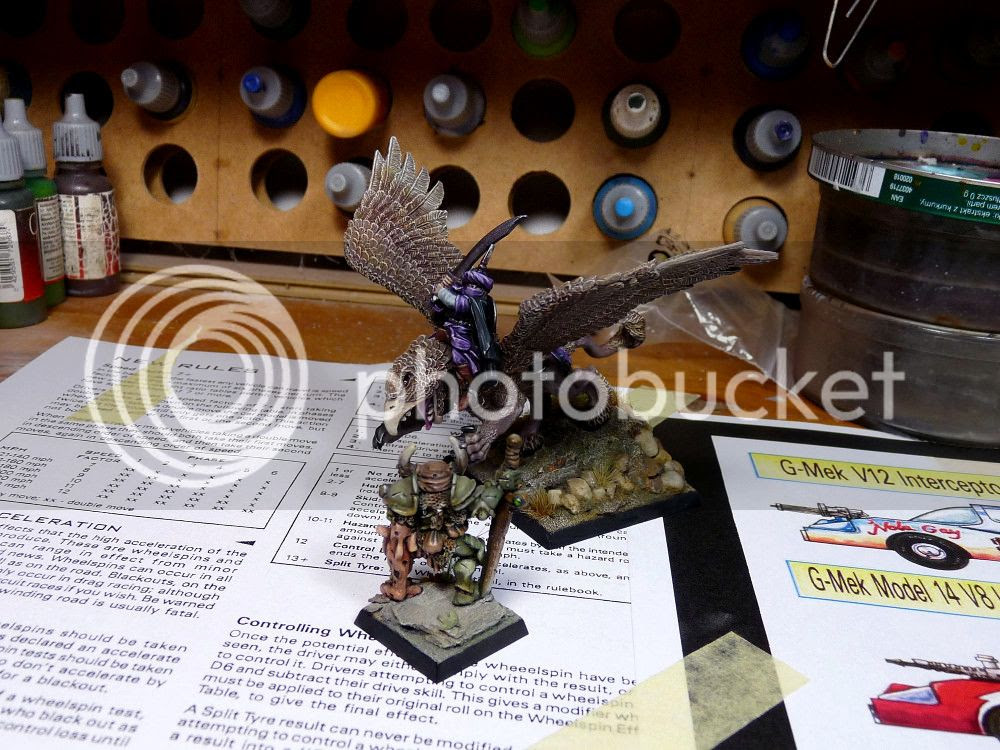 *all in all it turned out it's not Empire griffon but Bretonnian hipogriff...
Posted by demi_morgana at 12:02 AM No comments: