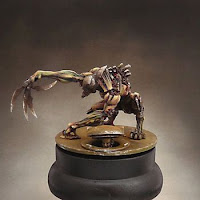 So the time has finally come: spring arrived with full force (24*C last Friday!!!) and with all consequences - spring clean...
Yup - I hate it but such things just happen and any resistance is useless. So today best time for painting was brutaly consumed by cleaning, vacuuming and repositioning furnitures. Spring clean was also applied to the blog - as you can see I am still changing layout elements and improving my HTML/CSS skills.

Fortunately only one day was ruined by cleaning and rest of the week was pretty successful for me - and of course the hobby!
Without more unnecessary introductions - the biggest hit was finishing Rackham aberration!!! Taking pics was a bit tricky but all in all I am satisfied - pics ain't that bad (could be much worse) and the model inself presents just sweet in my glasscase. Ladies and gentlemen - here's my baby:

I want to thank to Chest of Colors users for all constructive feedback I got for the model. I know which parts could be done better and I hope to use all the advices while painting the second aberration - this one will be much brighter and probably based in more natural scenery although it's just at idea.

Speaking of Rackham stuff - once again this company dominated my hobby activities:
yesterday I managed to assemble another sweet model from Dirz' Alchemists: dasyatis clone. I even started building base for it but it turned out to be too small - this close in one big badass! But no worries - the base will not be useless for a long time.

In the middle of the week I also managed to assemble and prime Mid Nor war staff. I'm quite sure I'll be having great time with painitng these deaders. I hope to give them fancy wooden display base but I'm still gathering materials - finding proper wood ain't as easy as it might seem.
Some time ago I thought if this squad turns out fine I'll take recently painted Rackham stuff to some painting contest - I haven't won anything for ages and I thing these minis are examples of my better paintjobs. Once again it's just a thought.

The last thing related to Rackham is the fact last night I managed to contact with the mysterious provider of my Rackham stuff (heya Alek ;) ). There's a chance I will get some more sweet stuff in exchange for some painting services. We'll see...

Unfortunately not whole world spins around Confrontation minis so sometimes I paint other stuff as well. Enchanced by success of Chaos Lord put on Ebay 2 Thursdays ago I painted another yet another CSM character which was just getting dust at my place. The Chaos Sorcerer will be searching for new owner on Ebay for the next 10 days.

It was supposed to be Nurgle Sorcerer (that's why I put the maw on the right shoulder pad) but I believe he would fit any other legion of Chaos. Besides some time ago I painted whole squad of Chaos Terminators so who knows, maybe the client will decide to add another character to the detachment.
Since we're at Nurgle models - last Thursday I ordered champion of God of Decay and I hope to recieve t just after the weekend. I must say it's one of the best imo Nurgle minis GW "recently" released so I hope to paint it fast, have some fun and put on Ebay before current auction ends. I'm curious if fantasy models are equally popular as science fiction. There's no better way to check it that start painting!

What else? Last evening I started building display base with forest theme on it. Initially I wanted it to become base for fantasy Nurgle model but then I thought potential buyer might want to play with it so such base will be used for another project. I have to paint a miniature for a friend and despite the fact the model hasn't bee chosen yet I can build and paint the base anyway.

And last evening we finally managed to play Arkham Horror game!!! If I remember corectly about 1,5 year passed since we were trying to keep Ancient One it the slumber not mentioning about saving the world (well at least Arkham city). But last evening stars were placed in right constellation so 3 adventurers were hunting down Mythos Creatures on streets of Arkham in order not to let Yog Sothoth wake up. Too bad there's not much negotiations with this Ancient One and very shortly after he opened one of his eyes (or whatever else Yog Sothoth sees the universe thru) we were all dead. We were still lucky though: we managed to survive 2 rounds of combat!

See ya next week!

Posted by demi_morgana at 5:41 AM
Email ThisBlogThis!Share to TwitterShare to FacebookShare to Pinterest
Labels: Ebay auction