Apparently my COVID isolation is getting over tonight. I've always considered myself homebody, but being forbidden to leave the flat was getting annoying... 🙄
Nevertheless I tried to spend that time the best way possible, best way for the hobby that is. So after finishing M8 Scott howitzer for online painting contest decision was made to finish pair of oldie praetorian stalkers for oldie Warzone game.
While preparing this post I realised ramaining stalkers were painted over 5 years ago! Therefore I am more than happy I could finally make the family of evil complete... 😈

New (or rather: "new") models are much smaller than stalkers painted already. And that's because these come from Target Games' RPG which was realeased even before Warzone game. This makes these two true gems in my collection - pieces of hobby history!

Hope you like them:
both those old and those older 😉
Behold! Algeroth's finests led by mightly nepharite! 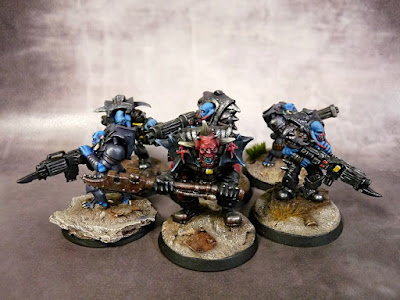 Latest addition to the evil force: 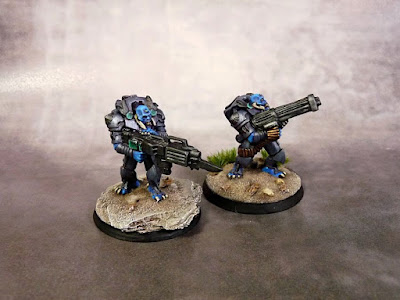 And size comparision. Models from RPG are not only smaller (about size of ordinary human model in Warzone) but also are much less detailed then later version: no carving on armour, much less details on the gun and face: 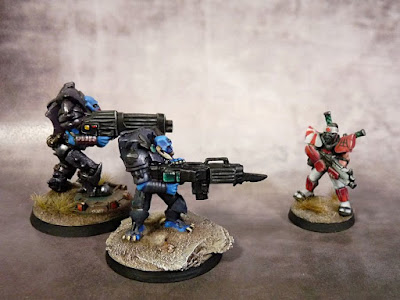 While working on these praetorians I was also having kind of time travel - again actually...
Back to the careless mid 90's when I discovered the hobby. Praetorian stalker was one of the very first models I've seen ever so these have special meaning. I spotted it in Polish edition of Mutant Chronicles zine, added to old fantasy magazine, which my bro used to read. I still keep Warzone dedicated pages!
In the winter 1995 there was a tutorial about painting the stalker and Bauhaus seregant - maybe one day I'll try to paint another praetorian, much more colorful, based on oldie tutorial.

But that's plan for another time travel ⏱ 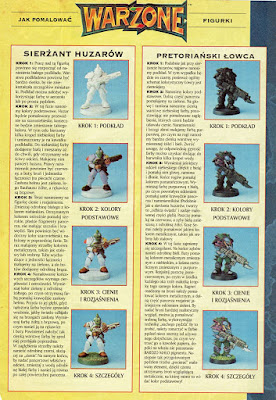