Lich Lord (not Lichemaster though) - review and walkthrough, part 2

So here's the second part of my adventure with painitng Lich Lord.
Painful adventure as it turned out...

The next step is basing:
in case of "ordinady" models (that is: minis which cooperate with me instead of just being pain in the ass) I prepare the base, mount model on it and even sometimes - paint it first. The matter of personal taste that's all, basing is just fun.

In case of this one everything was more tricky:
model is made of several parts, it's pretty unbalanced and heavy which made painting it already based impossible. Assembling it also wasn't easy (lots of greenstuff was used to fill the damn gaps and make bits stick together) so in my opinion painitng the parts separated and assembling them later would not me a good idea.
So the decision was made to paint a pony and dead girls already on the base and other parts - separated. Base itself will be painted as the last thing.

As you saw in the first part of the walkthrough I used placcy GW regiment base: it's big enough for a chariot and it also has borders around so it's fine for applying artifical water. Weird thing: I was taking pics from the very beginning but when pics were downloaded it turned out some of them were missing and other - very blurry. By some mysterious way autofocus was off. But I should've expected paranormal activity - it's lich after all...
Paranormal or not - I managed to save only pics below so as for stuff you cannot see you'll just have to believe in my babbling.

First the base was filled with cork (around place I chose for the "pond" to get irregular, natural edges) and ~5 mm thick foamcore. I must admit I chose foamcore only because it was easier to fill the space than cutting and assembling cork. Then everything was covered with 2 layers of white glue and sand. 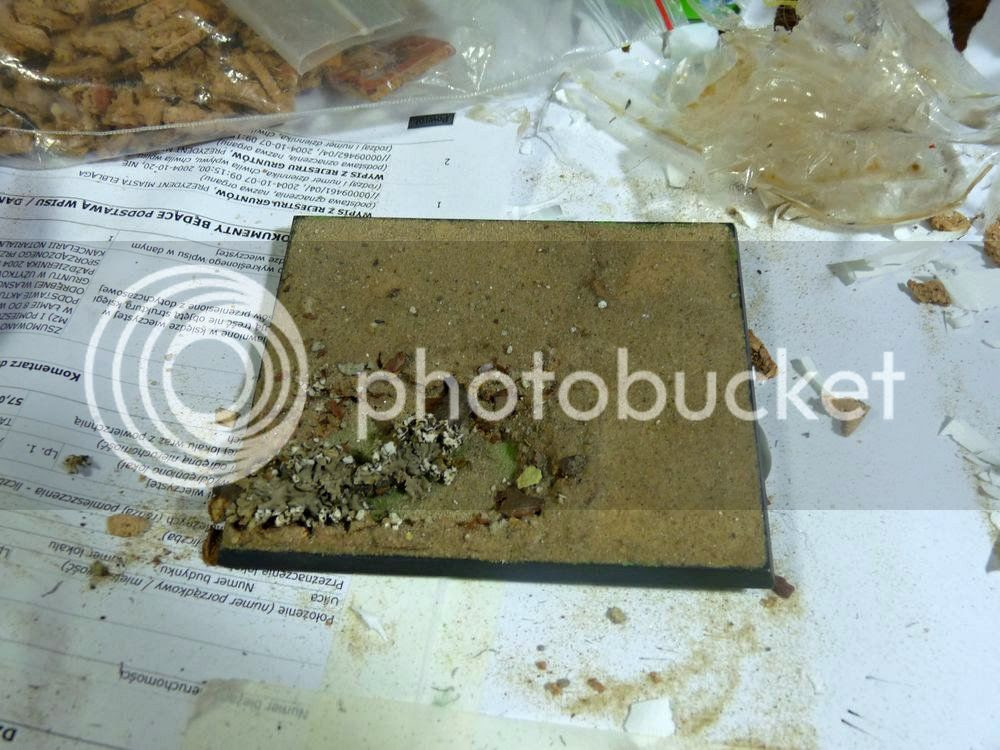 Then I realised a wagon filled with dead corpses crossing swampy area would surely leave deep tracks rather than just gently step on the very top of sand layer.
Like some sort of wicked necro-ballerina... Jumbo size...
Carving thick layer of sand would be pretty hard so just made 2 brownstuff "sausages" and made the tracks on the sand layer. In the end there will also be some vegetation, foliage and fallen leafs (lots of damp trash) so it should be no problem. 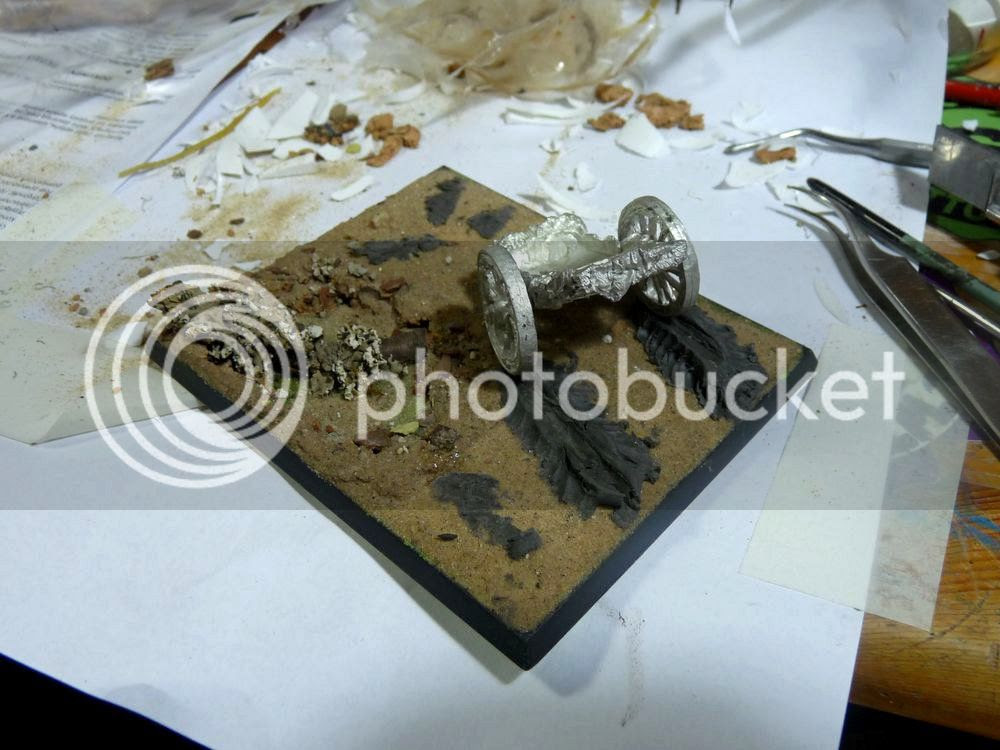 Everything as covered with sand again.
Damn you lich, damn you and your autofocus sabotaging!!! 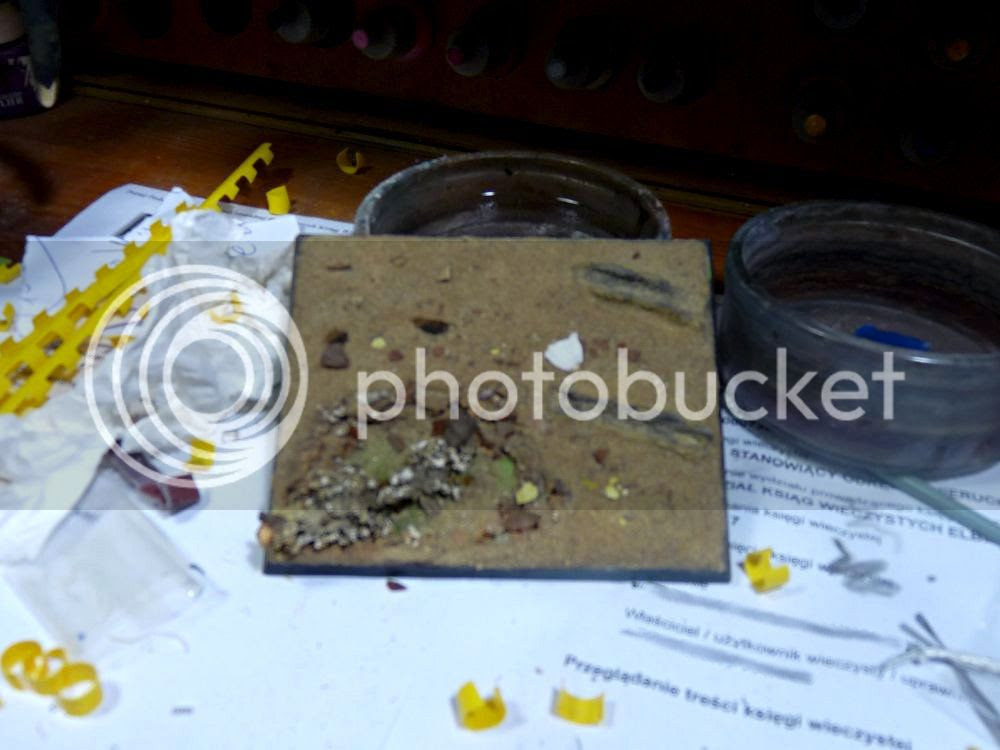 I marked places where models will stand and drilled holes for the bars.
At this stage I was really happy I chose foam board: it's easy to work with but it's just great for pinning models into. Except in this case there will be not much pinning. Gamezone stuff I got is really thin and fragile I am quite sure any attempt of drilling would simply break the limbs. Pain in the ass. 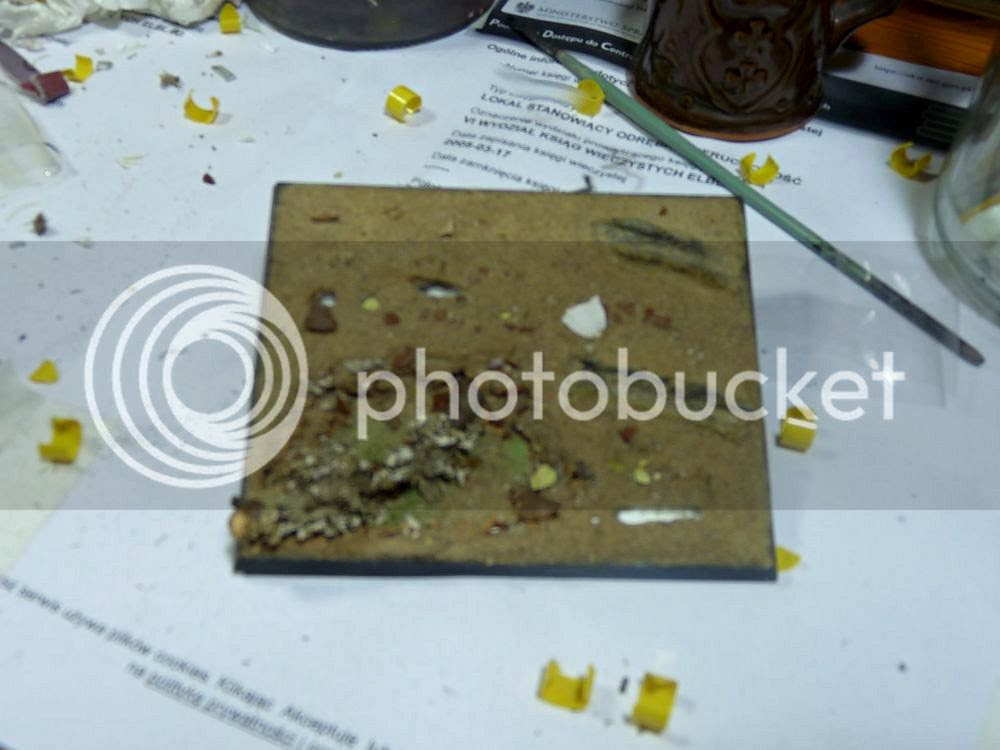 And here's the first painting-patient: dead girl.
Pretty wicked idea - you cannot see it on the pic but this litle lady is carrying skeleton doll on it's rigth arm. Some greenstuff was put into the hole in the base, then superglue applied, models was pressed into this and surface was masked with sand. Bulletproof bond.

This model will be kinda test model for swampy colors to be used. I want to keep whole thing in rotten / greenish hue but we'll see whan happens. Whan I know for sure is I will try to paint very dark, deep shadows on the chariot to hide all gaps I didn't manage to cover properly with greenstuff. Wish me luck. 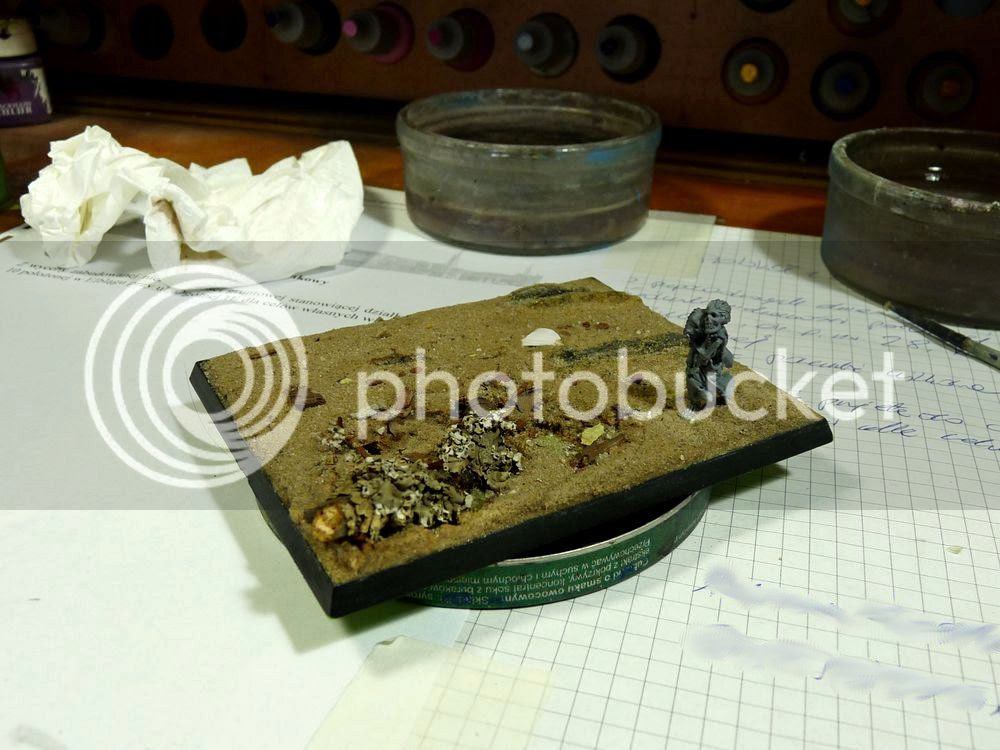 Posted by demi_morgana at 1:48 AM
Email ThisBlogThis!Share to TwitterShare to FacebookShare to Pinterest
Labels: Gamezone, IABN, lich, Oldhammer, walkthrough