After finishing Undead wyvern it was good idea to take a step back from classic fantasy theme to see what's going on in the good old dark space...
Turned out there was actually lots of going on in that matter.
Last weekend we managed to play another Warzone game. It was probably the 3rd game this year so it was quite an achievement especially given the fact Warzone is supposed to be dead system for quite a long time. Luckly for the game what is dead may never die! 😁
And luckly for us this time instead of sever rules modification we added scenarios from 3rd edition of Warhammer 40000 and must admit it was a blast. It was actually so cool we decided to use these rules during another match - hopefully maybe even next week.
One of most deadly models during that game was my opponent's Cuirassier Attila. That deadly clanker managed to eradicate most of my undead legionnaire squad with a single rocket missle. It was huge pain in the ass until I managed to reach it with my long range weapons. The model my opponent brought to the game was painted with just few base colors so I decided to give it some fresh tones - such a model deserves looking nice.
Must say I've always liked this sculpt - since the time my buddy introduced Warzone to me - at the beginning of high school. It's just damn cool: cold blooded (cold oiled) killing machine, equipped thick armour and big gun. With no skulls, spikes, loincloth and other useless crap models from most popular miniatures company on Earth wear... 🙄
I was asked to paint the model using more less original color scheme. But I was also asked to keep the head (face mask) gold. There's a story behind it:
Back, back days when we were starting the Warzone thing there was group of a few playing but none of us had any painting experience. In mid 90's my city was dark shit hole as for hobby. As for other thing most probably too. We brely had any painting tools and paints - I even remember I was also using those stinky, toxic enamels to paint first models ^^
My opponent (that time collecting Brotherhood) was trying to paint his units but I remember he had only 4-5 colors at the disposal: blue, red, white and brown (probably) aaand gold...
For some mysterious reason he decided to paint bald head of the seregant with gold which was just utterly stupid idea. It you cannot imagine it - check this guy 😋 (the band is pretty good actually). So to give the honors to the old times and bring out some cosy memories of careless times Mr Attilla got some gold to shine in the dark, cold, cosmic abyss.
Below - supporting squad of Chasseurs (some more pics of this unit here): 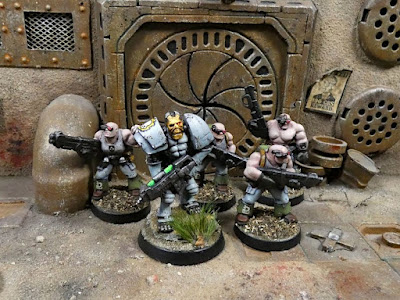 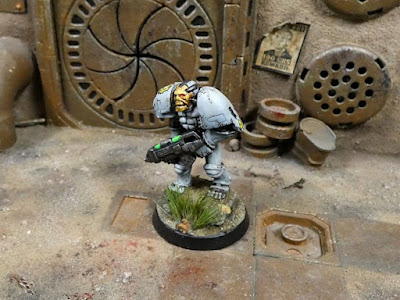 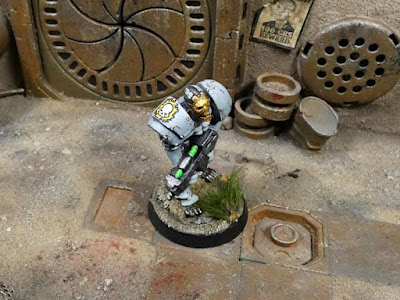 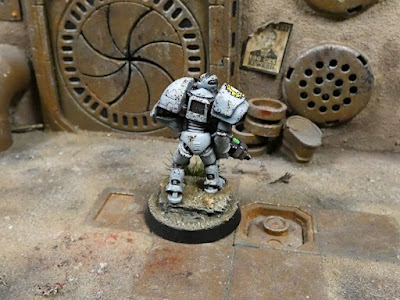 Thanks for reading!
Posted by demi_morgana at 1:05 PM
Email ThisBlogThis!Share to TwitterShare to FacebookShare to Pinterest
Labels: Cybertronic, nostalgia, Warzone