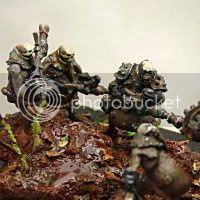 So hello again - this time I hope to finish posting before my PC collapses...

Anyway the passing week was full of big hopes and plans confronted against brutal realiy. As we here say: "I wanted to do it well, it turned out just like always" (or sth similar).

So lets start with the big plan: we were told some time ago the will be some nasty test on Univ (last Friday evening). So as a good student I was taking Univ stuff to my workplace and was trying to master this arcane knowledge - learning at home is hretty hard with all this nice Rackham minis waiting for the paintjob (damn you Alek... ;) ).
I thought I can take week off to prepare for the test - which I did...
At least the first part: taking week off ain't the problem, the problem is using it for sth anything else than hobby stuff!

I spent 3 days in a row playing this damn Civilization on PS3 - the game is much "easier" than it's PC version but it's still lots of fun! At first I didn't like the idea the game universe is MUCH smaller than it was on PC but then again you can finish the game before it starts getting boring.
The game fistracted my attention so much than on Wednesday afternood I decided I MUST do anything else but once again - it definitely wasn't learning!

The Archaon model has been prepared for painting last weekend so I started paitning the guy.
All in all I confirmed that painitng a single man-sized ~28m model takes me about 3 afternoons/evenings: by the Saturday the rider was finished.
As you can see the model was slightly convereted - there are manyArchaon painted so far and I wanted mine to be rather Lord of Nurgle (Ia, Ia, Ia Papa Nurgle!!!) than just Archaon.
Besides I think General of Nurgle has batter chances for finding new owner on Ebay than Archaon - I hope to check it soon!
Picture below is of course wip and as I promised last week - it's clickable!

At the beginning of passing week I presented my entry for "Gone Muddin'" painitng challenge to COFC guys and as always I wasn't disappointed: I got constructive feedback so fast that a day after base of my entry was repainted and even more water effect added. I really wasn't 100% sure of making that but after the paint was dry and pics takes - I must say The Forum was right: I like new look much better. I just hope the judges will also appreciate my efforts and bile thralls will be printed in NQ#31 ;) 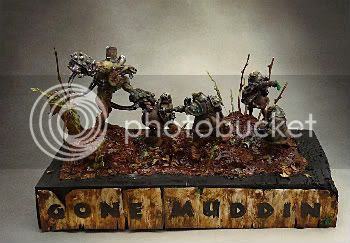 What else?
As you saw lasy evening because of technical problems I couldn't post on time - I hope to get new stuff today so there will be no delays in future. Besides I have some important stuff on the disk and would be veeery pissed in case of loosing it.

Speaking of loosing - it turned out there will be no article about making Red Hook's base: I had full photo documentation of making it but why for the fuck's sake should anyone check if all important pics were downloaded from digicam on PC before formating memory card?
At least I learnt something - maybe hard way but apparently there's no better way of learing for me...

Take care - hope to see you next Sunday!
Posted by demi_morgana at 9:33 PM
Email ThisBlogThis!Share to TwitterShare to FacebookShare to Pinterest
Labels: bile thrall, No Quarter zine, painting contest