Mezoghoul has been sent to the client over 2 weeks ago so I can finally paint something for myself and surely - something smaller this time.
Lesson learnt: next time before accepting any painting commission for model I don't know I will ask for scale photo.
I haven't got info the model arrived to Sweden safe and sound so I hope whatever is going on my panzer-box provides totally damage proof enviroment for Mezoghoul (the model has been actually sent inside 2 boxes and lots of sponge). 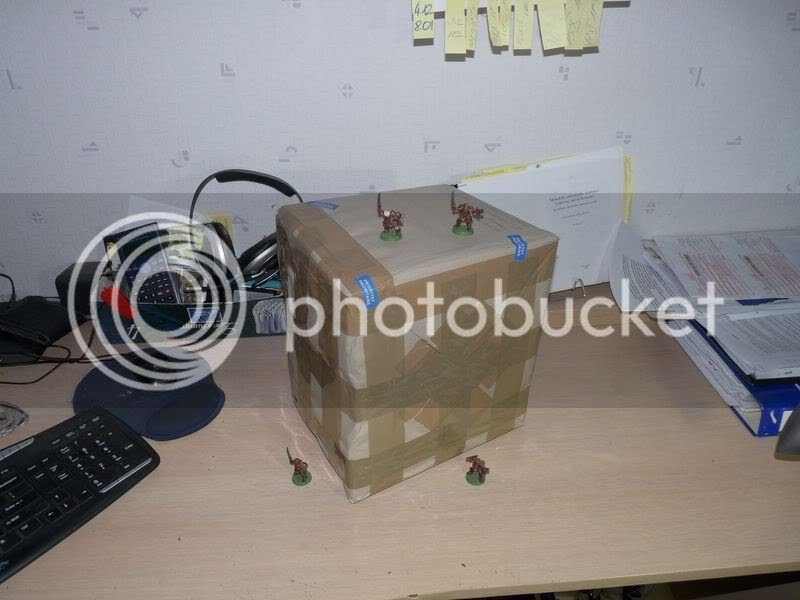 What else?
Last weekend we managed to add some more plaster on the modular Necromunda game table. Some gaps were filled so whole thing is closer to sand+pva maelstrom stage.
I would really love to take some days off to finish whole projects and I think it is a plan after passing the exam next year (hopefully...).
I still have to make a big multi-level bunker for the last module so I think the best I can get yet in 2011 is the thing ready for sand.

As for painting there are 3 minis on the desk now:
The first one was painted for Chest of Colors miniature exchange #5 (once again thanks for it Phil! ).
The model is cool superhero (or supervillain) sculpt I got from Przemas some time ago but until now I had no motivation to paint it. A shame to admit...
I like the model but just don't collect superheroes.
So 3 evenings of painting, some pva and one of COFCers for another model:

Another one is something which made me pretty happy and proud actually - not because of painting quality but because it's the first mini from fantasy range I painted for a looong time.
Cernunnos is cool thing from Celtos range which I got from Navarro some time ago. Another reasom which makes is special is the reason it was painted: the first FUUK online painting contest.
Contests always do miracle when it comes to boosting motivation.

And the last one - which will hopefully become my second entry for the mentioned event: scaly.
Because the Scavvy gang is complete (thank you Evilbay!!!) all I need is painting (and re-painting...) the rotten gangers.
As wrote before - imo original scaly models are shit compared to the rest of the gangers so I decided to hire replacements.
Besides thank to this I could choose the best weapons possible for these steroid fuckers: club and sword, which gives scaly: 3 attacks, 6 strength and parry. Add to this 4 weapons skill, fear and armour save and the opponent can start looking for spare underwear ^^
Anyway for model is based on LotR Moria Troll which I got (again) from Ebay. All I did so far is replacing weapons with scratch built sword (pcv sheet + some greenstuff) and
club (heavy stubber + some nails). I think I will add some armout we well but at this moment - the wip: 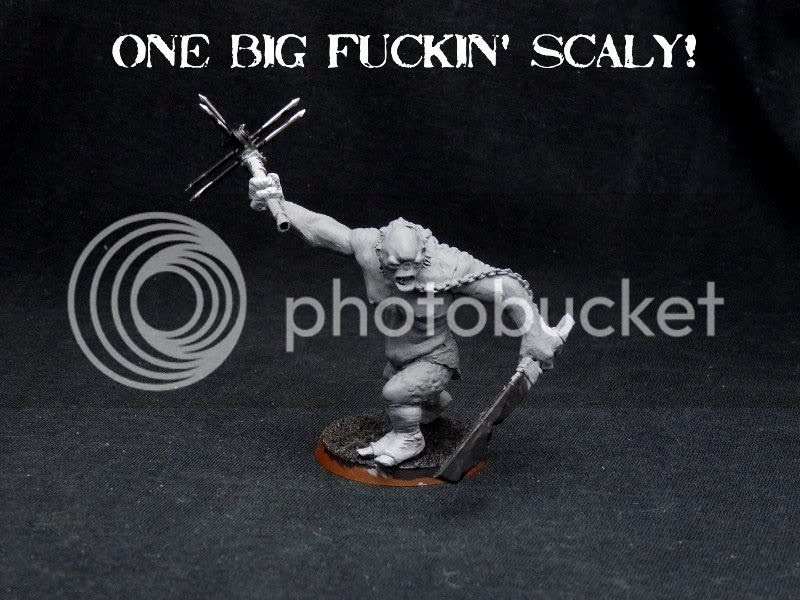 The next post will surely include it painted - hopefully before the friday night game.
Cheers!
Posted by demi_morgana at 11:52 PM
Email ThisBlogThis!Share to TwitterShare to FacebookShare to Pinterest
Labels: Brigade Models, Celtos, Cernunnos, Mezoghoul, miniature exchange, painting contest